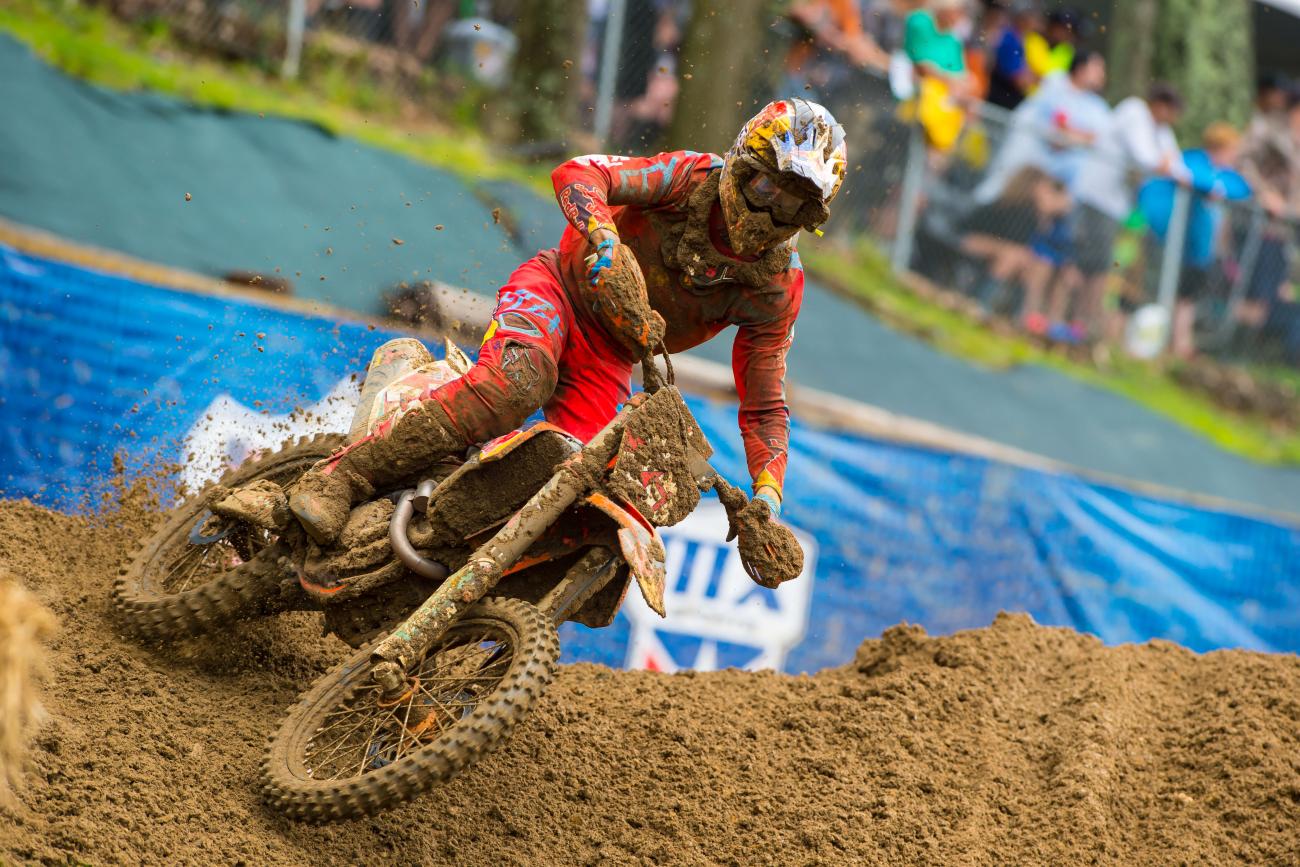 3 on 3 Questions after Budds Creek

1. Halfway through this 250 fight, it’s still really close between Marvin Musquin and Jeremy Martin. Has either one swayed you and become a clear favorite?

David Pingree: In the first few rounds I thought Jeremy had the upper hand and was in the driver’s seat of the series. Lately, however, Marvin seems to be gaining momentum. This one is too close to call right now. One of these guys needs to assert their dominance, alpha male-style, and lift their leg to this championship. Kind of a gross play on words, but you get the idea.

Denny Stephenson: Nope. I still think this thing is a toss up. Both have won races and made mistakes. I realize some of J-Mart’s favorite tracks are coming up but I see Marvin minimizing the damage and taking the title all the way to the final moto. I think they’re both mentally strong and both confident that they’ll be the one left standing in Indiana. I’m not even going risk a prediction, because, well, I’m usually wrong.

Jimmy Albertson: I have no clue who is going to win, but that’s how it should be, right? It’s nice to see a championship with no clear winner. Hopefully we’ll get to see them hook up on the track soon. Enough of this good moto/bad moto BS. Come on, guys, get two starts and race it out this weekend!

2. Christophe Pourcel has improved rapidly the last two races. Can he win a 450 national?

Ping: No question. Pourcel has always had the speed to run at the front. He’s been plagued with some injuries and a lack of confidence in his programs and/or himself in recent years, but it seems like he’s happy where he is. For any rider with that level of ability, all it takes is one good moto to get to the next level. Give him a holeshot or a good set of circumstances in a race and he’ll get his first win this year.

Denny: Shoot, that’s a great question for the simple fact that, from what we’ve seen over the years, CP could slip back into the sixth through tenth spots, get frustrated, and then head back to France before the season ends. I’m kidding.

This deal looks like it’s working well, and it’s great to have him getting confident and to have another fast 450 guy to help make these races exciting each week. As for a win, a month ago I would have said no way, but he’s getting better each week, and if there’s another weekend of mistakes and or illness from the main two, the Frenchman could easily find his way back to the top of the box. Or, it could rain again. If those things happen, he’s right in the mix.

Ping: I’ve been in plenty, and as a terrible mud rider they were all “sucky.” The worst was High Point in 1997. There were literally rivers running across the lower section of the track, and ruts went the length of entire straightaways. I remember two things from that day: Damon Bradshaw winning on his Manchester Honda and hearing Ricky Carmichael scream-cry every time he would crash. He was leading the series up to that point and pretty much killing it, and I think he was concerned his title hopes were washing away in that mud. I’ve never heard such a blend of shouting, crying, and cursing. He would pick himself up, go blowing past me, and then crash again. I would paddle my way past him as he struggled to pick his bike up, tears running down his chubby cheeks and profanity spilling out of his Bell helmet, and then he would go flying by me again. It’s funny now, but I wanted to lie down in the mud and cry with him. It was horrible.

Denny: Oh, there have been so many good ones over the years. Or, should I say awful ones. The one that will always stand out in my mind would be the flood of 1991 at Hangtown. It wasn’t muddy; the track was just a lake. I’ve never experienced anything of that magnitude before or since. Two things I remember distinctly: While the other mechanics were trying to duct tape their air boxes in an attempt to keep water out, my dad/mechanic went the other way. He said there’s no way to seal it completely, so he decided to let it breathe so the water would hopefully run out instead of filling up. And it worked! The other thing I remember is that I decided not to wear any type of plastic tarp, poncho, or mud enduro jacket. I felt I’d over heat, so I just ran a cotton jersey. And this is memorable because I froze my ass off. I was totally soaked, like I’d just jumped into a swimming pool. I remember being in third with the race winding down, and I have Doug Henry and Buddy Antunez just a corner in front of me. I was in sight of the lead, but I was literally frozen to the bone. I was shaking. My teeth were chattering. I was like, “Just get this thing over with and take third.” As we all now know, they cancelled the second motos, and that ended up being my only 125 National MX podium. Gotta love the rain!

Top Jimmy: Daytona SX 2008. I had no idea what place I was in, and I fell in the last corner on the last lap. Well, apparently, I was in third. Then I went to fifth. I could have had a podium! Then, to add insult to injury, I was walking back to the pits and I stepped in what I thought was a puddle. It was not a puddle; it was a four-foot deep drainage hole. Great, great night.