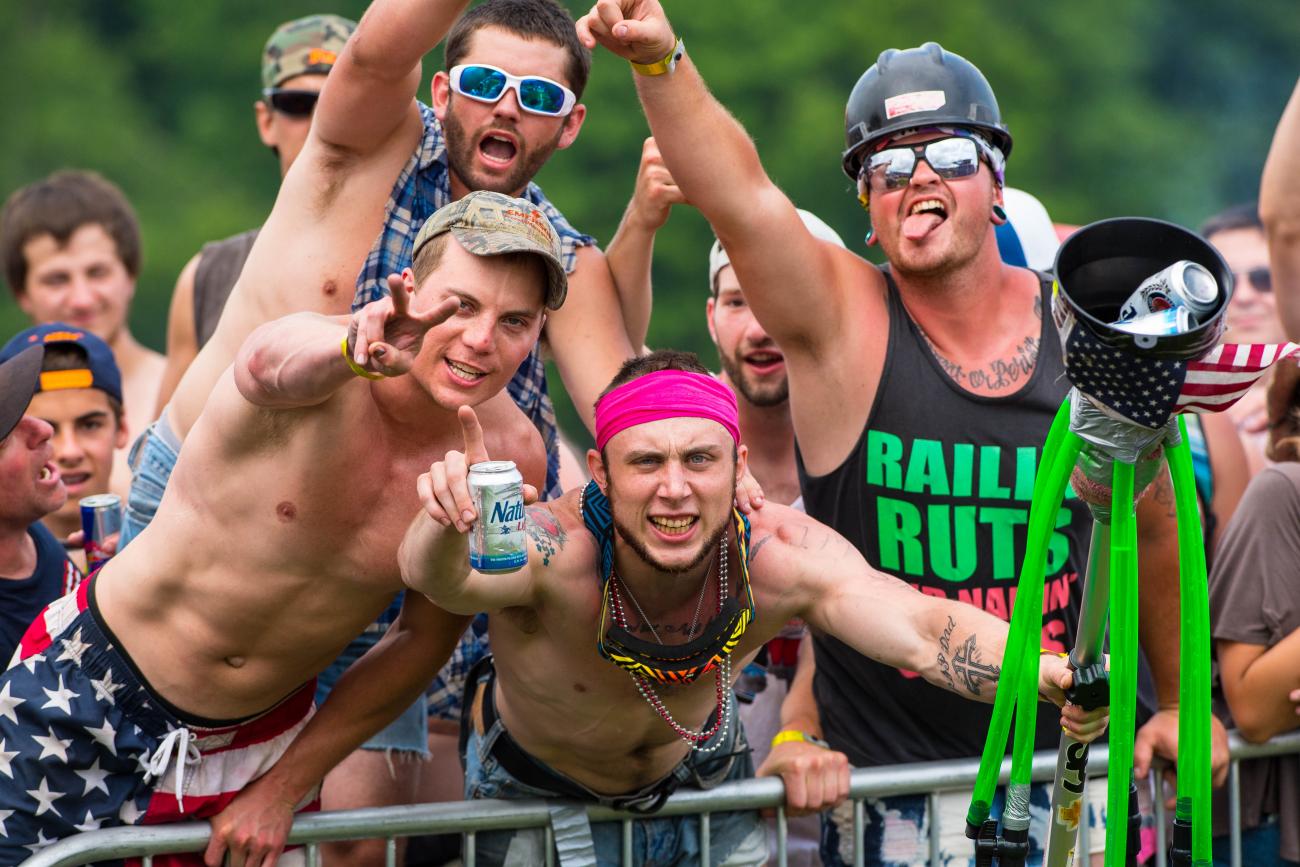 I would never venture to say any and all mainstream press is a good thing for motocross. Uneducated writers and editors could quickly pounce on a subject in which they know little about, take the “if it bleeds it leads” approach and then move on. Wired, a magazine that concentrates mainly on technology, recently ran on online piece focused on the safety of motocross. Although I think the headline is clickbait-ish, the overall piece was more than fair. Sam Smith, author of the piece, spoke with former AMA Supercross and Motocross champion Rick Johnson, Chris Sackett, vice president of Bell Helmets, and Jeremy Appleton, a motorsport specialist for Alpinestars, about safety in motocross. I recommend checking out the entire piece here, but below is an interesting except from Sackett in regards to fear of litigation and publicized safety claims.

All the way back to 1954, when Bell invented the first motorcycle helmet—it was a composite shell with an EPS liner. Until the last few years, everyone’s been using that. Now, the liner got thicker, and the standards got harder to pass, but other than that, there hasn’t been any change.

A lot of it had to do with, since the ’90s, litigation just got out of control in the United States. In the early ’90s, there were 25 helmet companies, and it got whittled down to, like, five, just from litigation. Some rightfully so—some companies were putting crap onto the market, and people were getting hurt. But the reality is, when you have ambulance chasers, no one wants to talk about safety, or what their helmets do to protect the rider, because it’s just going to get you into legal hot water.

Speaking of mainstream media and motocross: Metal Mulisha members were on NBC’s hit-show, America’s Got Talent, this week performing a freestyle set. The judges, including supermodel Heidi Klum and radio shock jock Howard Stern, were more than impressed. “I’ve been on the show for four years and this was the most excited I’ve ever got. You guys were too much. I have never seen a more dangerous thing, you are spectacular,” said Stern. Metal Mulisha got four "yes" votes and will move on to the next round.

He’s heating up. For years, scientists debunked the “hot hand” in basketball, thanks in larger part to a 1985 study by psychologists arguing it was a myth. The hot hand is the thought process that a player who hit several shots in a row has a better chance of hitting the next, thanks to a perceived “hot hand.” Recently, a handful of studies have been published arguing that the “hot hand” may have merit. According to Vox, “researchers looked at twenty-nine years worth of data from the NBA three-point shooting contest and found that players who hit three or more shots in a row had a 6.3 percent higher chance of hitting the next one, compared with their baseline rate.” More from Vox:

The earliest evidence for the hot hand came from a handful of studies looking at larger data sets of NBA players' free-throw attempts. When players made multiple attempts in a row, those who hit their first shots were about 2 percent more likely to hit their second shot.

This isn't exactly what fans classically think of as the hot hand — which usually involves taking shots during live play, rather than free throws — and it could be explained by other sorts of mechanisms, such as the first shot correctly calibrating the player for the second shot. But it still suggests that basketball players aren't the robotic shooters we thought, even at the free-throw line.

But last year, using optical tracking technology to correct for these effects, a group of researchers analyzed every shot taken during the 2012-'13 NBA season. When they compared shots of identical difficulty, they found that players who'd made an uncommonly high percentage of their previous four shots had a 1.2 to 2.4 percent increased chance of hitting their next shot.

It's a small effect, and could be the result of impossibility of precisely determining the difficulty of every shot taken during live play. So the co-authors of the new paper — economists Joshua Miller and Adam Sanjurjo — looked at data from the NBA's annual three-point contest, which started in 1985.

We all want laser guns

As a small child, we all wished to grow up one day and become proud owners of a laser gun. It was inevitable, at least back then anyway. Well, this guy did grow up and own a laser gun—THAT HE BUILT. According to Motherboard, “It uses eight five-watt lasers and mounted onto a giant heatsink and powered by a giant lithium polymer battery pack.” Enough with facts and stuff, check out this sick video of him destroying things.

Poor, FIFA, just can’t seem to get out of its own way. Sepp Blater, FIFA’s fearful president who resigned on June 2 amid corruption allegations, may be reconsidering the decision according to Deadspin. Yahoo is reporting that he has hired a high-powered American attorney Richard Cullen to represent him. If that wasn’t bad enough, FIFA’s PR movie United Passions, which we told you last week flopped, reported just $918.00 (TOTAL!!!) in its opening weekend in the United States, says For the Win, before being pulled by its distributor. Oh, boy!!!

Prosecutors in Switzerland, where FIFA is based, have identified 53 suspicious bank transactions and could summon Blatter and FIFA General Secretary Jerome Valcke for questioning, Michael Lauber, the Swiss attorney general, told journalists on Wednesday.

Cullen has long ties to FBI Director James Comey, whose bureau is conducting much of the FIFA-related investigation. Comey served as a federal prosecutor in Richmond, Virginia, where Cullen is based, and worked as a partner at McGuireWoods. Cullen spoke positively of Comey's nomination for FBI director in 2013.

As a lawyer, Cullen has often represented government officials as they tried to fend off indictments in high-profile criminal investigations.

Actually, make that ten-dollar bills. According to the New York Times, the Treasury has announced that a portrait of a woman will soon grace the ten-dollar bill. The new note is expected to be released in 2020 and will feature a yet to be determined woman candidate. More from the Times:

The only criterion under law is that the chosen person must be dead, but the Treasury said Mr. Lew was looking for a woman “who was a champion for our inclusive democracy.” That would include the abolitionist Harriet Tubman, who was the top choice on social media of a campaign to put a woman on the $20 bill.

Putting a woman on paper notes is certain to be an honor more long-lived than that accorded two history-making women whose images were put on coins. Susan B. Anthony, the social reformer, appeared on silver dollars minted from 1979 to 1981, and again in 1999, and Sacagawea, the Shoshone guide to the Lewis and Clark expedition, was featured on gold-colored dollar coins from 2000. Both coins, which were often confused with quarters, proved unpopular, and production of them was stopped.

Seems more popular than ever, right? Serial, a true-crime investigation podcast, took off earlier this year. Media companies are devoting more and more dollars into podcasting and ads are working. The New York Times, though, says it’s neither boom or a bubble—it’s in the middle. “Instead, it is that rarest thing in the technology industry: a slow, steady, and unrelentingly persistent digital tortoise that could eventually—but who really knows?—slay the analog behemoths in its path.” The entire piece is worth checking out, especially if you, like me, are downloading tons of shows a week.

“Mystery Show” has also proved Gimlet’s thesis that a network of shows can create a self-sustaining audience. With the possible exception of “Serial,” podcasts aren’t really part of the viral web. They don’t get chatted about on Facebook and Twitter, and the sharing and discovery features of many podcasting apps are limited. For the most part, people hear about new podcasts from other podcasts they already listen to. And once people start listening to podcasts, they keep listening to more podcasts.

The share of podcasts in Americans’ diet of audio programming grew by 18 percent from 2014 to 2015, according to Edison. People who listen to podcasts daily spend about two hours a day, on average, with podcasts, a larger share than for any other form of audio, Edison reported.

With any over-the-top action flick, there's bound to be one or two things that give you the “Oh, I wish I could do that” feeling. Driving on two wheels is one of them. It seems damn near impossible, though. Well, Esquire recently published a how-to-guide. [We don’t recommend trying this. Don’t be stupid.]

Tonny Petersen, a 78-year-old Danish acrobat–turned–stunt driver, who has been high-skiing cars for more than fifty years, says, "Oh, my God, I've rolled my share of cars. I have no idea how many. When you are driving high skis, you have flat tires. Tires explode, and the car goes one of two ways depending on the surface, potholes, and soft spots."

Check out the guide here. Again, don’t try this at home.

Just watch. That is all.

Last week, Nike and the NBA agreed to an eight-year deal that will see Nike manufacture all on-court apparel for the league beginning in 2017-18. The move is also big in that Nike will have its logo appear on NBA uniforms—the first time that’s ever happened. Details of the deal were not announced, but ESPN’s Darren Rovell is reporting it’s worth “roughly $1 billion.” That’s a ton of dough the NBA is set to make. Nike replaces Adidas as the official apparel provider of the NBA. More from ESPN:

Behind the scenes, NBA executives and Adidas officials had problems seeing eye to eye, as the Germany-based company still put most of its efforts into soccer. Earlier this year, Adidas dropped a spot in the U.S. sales rankings, as Under Armour became No. 2 in sales behind Nike.

While Adidas officials publicly said that the company's move into sleeved jerseys was a good one for retail, to make a shirt that was more wearable than a tank top, fans consistently panned the look.

Industry analysts will be curious to see how much the world's largest shoe and apparel company looks to push the envelope with the NBA, as its deal with the NFL has hardly resulted in much creativity save for a couple of teams, namely the Seahawks, Jaguars and Buccaneers.

NEA was an early significant investor in BuzzFeed, and based on that success, Sakoda says the firm is actively seeking to make more investments in “disruptive opportunities” within media.

Players Tribune President and co-founder Jaymee Messler told TechCrunch that the VC money will go toward expanding the company’s content beyond written articles into video and radio production. The site has already dipped a toe in video content, producing a series titled Singular Focus, which follows UFC middleweight champion Chris Weidman during his training regimen.