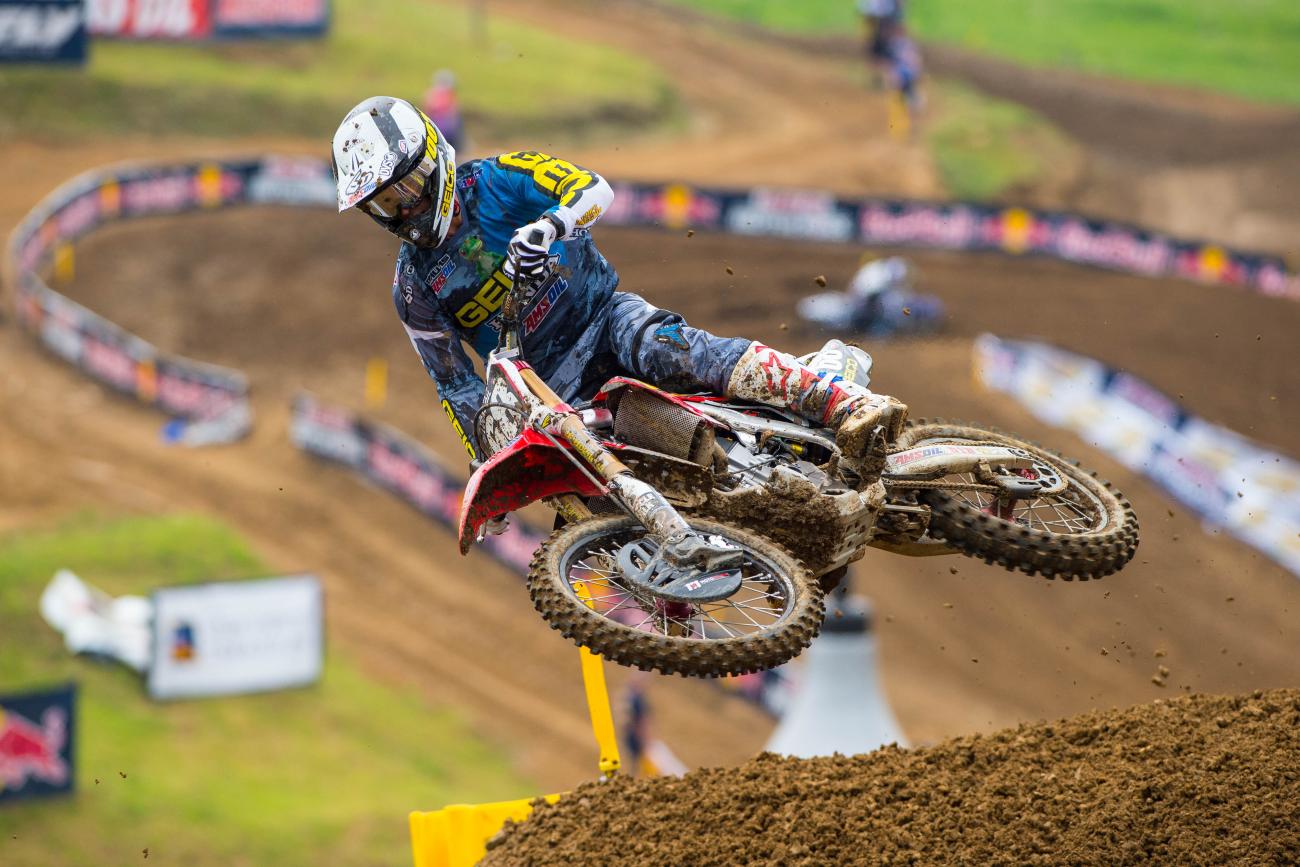 AutoTrader.com/Toyota/JGR Yamaha’s Justin Barcia has led a total of three laps this season, tied for fourth in the 450 Class with teammate Phil Nicoletti. The two laps that Barcia led in the first moto at High Point Saturday were the most he’s led in one race this season. An untimely crash on lap six after coming up short on the uphill triple forced Barcia back a number of spots. He recovered to finish the moto fifth, but was seen favoring his ankle after the race.

Barcia and Roczen stack up fairly even, splitting the opening four laps right down the middle. On the other hand, Dungey was, at points, nearly two seconds faster, helping him jump out to a massive lead early in the race. At times we’re seeing the likes of Barcia, Jason Anderson, and Christophe Pourcel match up with the Dungey/Roczen gang, but they haven’t been able to do it consistently.

Roczen was again much better in moto two than moto one, similar to last week at Muddy Creek. “The first moto, I kind of seemed to struggle again. I don’t know what it is with the first one,” Roczen said in a team statement. “I didn’t get that great of a start in either moto. I got a little bit lucky in the second one. As soon as I was leading, I just put my head down and charged all the way. This was one of the hottest races we’ve had so far this year, so it felt great. It was good to make a difference and get that moto win and finally an overall win, too. Ryan Dungey was right behind me the whole time during the second moto, so I had to work hard. This just shows that quality hard work pays off. We’re going to keep working and working, so hopefully, instead of staying even in points, we can make the gap a little smaller.”

Roczen’s teammate, Broc Tickle, was also strong at High Point, going 6-8 for sixth overall. “The first moto, I got off to a fifth-place start and ran up front for a while and finished sixth. I was a little frustrated after that because I felt like I could have ridden a little bit better,” he said in a team statement. “I was tightening up and not riding like myself so I had to regroup between motos.”

Trey Canard has officially been given the green light to start riding, Team Honda HRC announced in a press release. Canard has been out since March 21 with an arm fracture, but the team expects him to return at some point this season. “Right now, he’s only doing some light stuff, but as time progresses, we expect him to be back to speed,” team manager Dan Betley said in a team statement. “An exact return date isn’t set, but we’re going to be taking it week by week and expect to have him back later in the season.”

Canard’s fill-in, Fredrik Noren, has been battling a knee injury sustained before Lucas Oil Pro Motocross, but said in a team statement that High Point was one of his best days “riding-wise” this year. Noren qualified ninth, a season best, and rode to eighth in the first moto, also a season high. Noren fell in a corner while running inside the top ten in the second moto, but his mechanic Brent Presnell said in a team statement that Noren is beginning to look aggressive again: “He’s starting to get back some of the speed and aggression he had before tweaking his knee, so the goal is to just keep making steps forward each week.”

The grind of seventeen Monster Energy Supercross races in eighteen weekends, a weekend off, and then five straight weekends of Lucas Oil Pro Motocross can be taxing—mentally and physically. Rookies, especially, tend to hit a wall at one point or another in the season. Cole Seely may have hit said wall. In a team statement, Seely admitted he felt “flat” at High Point. “I felt flat all day; not sure if it was the little extra work I put in this week at home, or maybe the season is just catching up with me, but I struggled and just wasn’t feeling it,” he said. Seely, like his teammate Noren, fell in the second moto and could only work back to tenth.

“I don’t like being back that far or feeling the way I did today,” Seely said. “It was a little bit of an off day, so I just need to take a much-needed rest weekend and regroup for Budds Creek.”

Fellow rookie Blake Baggett had his worst finish of the outdoor season at High Point. Baggett’s front fork broke in the first moto when he came in contact with another bike, leading to a DNF. He crashed in the second moto and could only work to eleventh. “It wasn’t the best day that we’ve had, but we’ll keep plugging away,” he said in a team statement. “I got into somebody and had a mechanical. There was nothing we could do about it. Stuff happens, it’s racing.”

Monster Energy Kawasaki’s Wil Hahn is working his way back to 100 percent health, jumping into the 450 Class for the first time, and adjusting to a new team. That’s a lot of change. This week, Hahn and his team left the bike pretty much the same for High Point so Wil could concentrate on just riding during the week for training and practice instead of testing. He logged 10-9 scores for ninth overall, his best result this season. His previous best was a 13-16 in Tennessee. This was also the first race this year where Hahn has finished better in the second moto than the first. “Today was a huge improvement for everything,” Hahn said in a team statement. “I got a great start in the second moto and ran up front for a while, which allowed me to see and run the pace of the leader’s. I’m happy with the improvements we as a team are making every weekend.”

This might have been Dungey's best moto of the year; he made quick passes early, even around Roczen, and pulled away. The opening laps are usually not Dungey's best, so watching him leap a downhill double no one else had done early in a race was impressive. Then, after he made those passes, he kept getting quicker. Pourcel and Barcia kept Roczen honest in this one.

With Roczen being pushed by Dungey the whole way, we were back to the big gaps between the leaders and the chase pack. Anderson and Barcia, for example, were fast but not close to the lap times of the top two.

No surprise seeing Marvin at the top of this one, but J-Mart only logging the eighth-best lap is a bit of a surprise. He was stuck in traffic early, and as you can see, most of the riders turned in their best laps early.

Yeah, Zach! He stayed closed to Musquin for most of the moto, too.

In his third race post-retirement, Christian Craig found redemption, or as he put it, “big-time redemption.” Craig dealt with cold symptoms last week at Muddy Creek before returning to High Point and rebounding for seventh overall. "Going in, I knew I had to put in some results,” he said in a team statement. “Last week I want to forget about. It obviously wasn't me riding out there. I don't want to make excuses, but I was really sick, and I was really depleted that day. I wanted to move on from that and wanted to better myself.”

CycleTrader.com/Rock River Yamaha’s Alex Martin bounced back from a rough few weeks in which he’s dealt with a myriad of bike problems and crashes. Martin fell just shy of the overall podium Saturday after his brother Jeremy passed him late in the second moto. “Alex knocked me off the podium the first moto, so it was only suiting that I knocked him off in the second moto, so we’re even now,” Jeremy joked in the post-race press conference. Steve Matthes reported after the race that Alex could be joining his brother Jeremy at Star Racing next year.

Rumors are A Mart's going to head to Star Yamaha next year to join his bro.

Jordon Smith acknowledged in a team press release that he’s been dealing with arm pump during the first motos. He went on to say it improves in the second moto. At High Point, Smith went 16-6 for eleventh overall. "It's better [arm pump] in the second motos, and that's when I can ride like I know how,” he said. “It was a good day; I think we made some improvements…”

Rookie teammate RJ Hampshire had an eventful day at High Point. In the first moto, Hamshire ran as high as second (for four laps) before eventually falling back to seventh. "I pushed pretty hard for twenty-five minutes and was still in third," Hampshire said. "I ran second, ran third, but I ended up fading a little bit toward the end. But it was a good steppingstone for me. I got to see the [leaders'] pace, so I've got to keep building and don't let one crash halt it."

In the second moto, Hampshire and Shane McElrath collided after both attempted to scrub up the steep uphill. Hampshire went down hard and was unable to continue the race. He said he expects to race at Budds Creek. “I hit pretty hard, and I'm banged up, but nothing too bad,” he said in a team statement.

It was a tale of two days for Monster Energy/Pro Circuit Kawasaki. First, the good: Two different riders—Joey Savatgy and Adam Cianciarulo—scored moto podiums. The bad: Neither scored an overall podium and Chris Alldredge struggled to a sixteenth-overall finish. Cianciarulo, following a second in the first moto, never got going in the second. He stalled off the start and then got T-boned later in the race. He finished twelfth. Savatgy, meanwhile, finished fifth overall with 6-3 scores. “I struggled and rode tight in the first moto,” Savatgy said in a team statement.

Alldredge struggled with starts en route to 15-15 finishes. “It was my first time being here, and I had trouble memorizing the track layout, which slowed my pace a lot, but I found better lines in the second moto and was able to make a few passes,” he said.