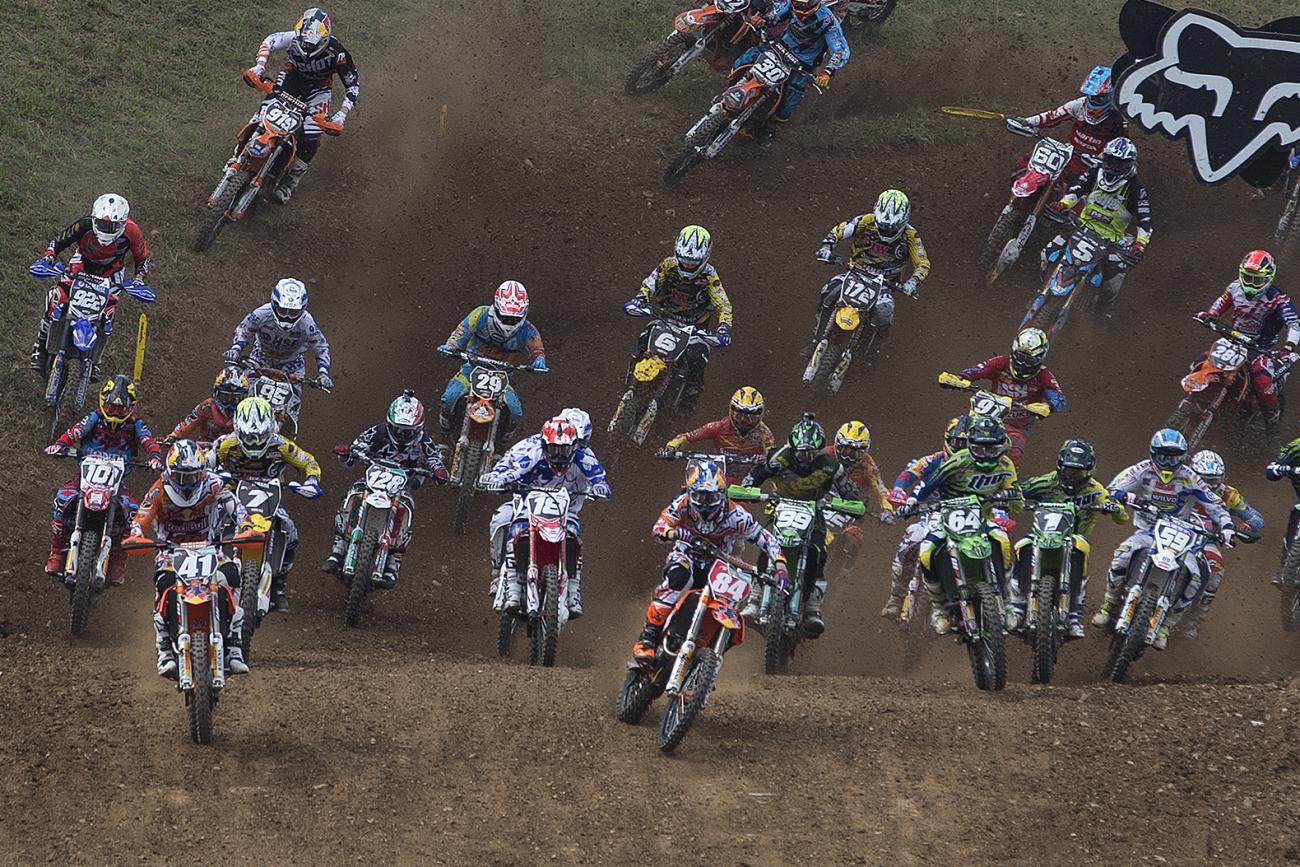 The FIM World Motocross Championship had to deal with the mud for the first time in 2015 in the unlikely location of Italy. Thunderstorms battered Maggiora—a Grand Prix venue for the third time in a row since undergoing significant renovation in 2012—and the steep hills and drops were slick and verging on a washout. The results this round relied more on starts than perhaps any other round will.

Yamaha Factory Racing’s Romain Febvre (decked out in the Yamaha Motor U.S. bumble bee style to celebrate sixty years of the firm’s existence) won the race with Rockstar Suzuki’s Kevin Strijbos (first podium of the year) and Red Bull IceOne Husqvarna’s Todd Waters (first-ever MXGP trophy in just his second term in Europe) joining him on the podium, but the MXGP championship story had already taken a twist at this ninth round of eighteen.

Rockstar Suzuki’s Clement Desalle saw another valid title plight end in injury. The Belgian had pulled out of the French Grand Prix two weeks ago due to a problem with his right shoulder. Desalle said goodbye to any chance of success in 2015 by opting out of Maggiora as well, complaining of discomfort with a slightly damaged MCL in his left knee—another consequence of incidents in France—and said he plans to miss next weekend’s Grand Prix of Germany to further heal. On Saturday Red Bull KTM’s Tony Cairoli hit a kicker on a double jump and landed hands-first on the ground. Initially, it was feared the champion had broken his left arm, and scans at the track followed by X-rays at the local hospital showed a re-aggravation of the fracture he sustained in April in Holland as well as another fresh crack. The accident sucked some of the excitement from the crowd, and some people even started funnelling out of the circuit. Cairoli showed true champion mettle by attempting warm-up Sunday morning through a torrential shower that got the fans noisy and out of their depression and then lined up last in the gate to attempt the motos. After his DNF at Valkenswaard, the Sicilian knew he couldn’t afford to gift Red Bull IceOne Husqvarna’s Max Nagl many more points, and his runs to 7-18 could mean the difference come the final round at Glen Helen.

Cairoli’s sheer will was vindicated by Nagl’s crash on the first lap of the first moto. The German managed to restart and pit for fresh goggles and minor repairs, but he could rise no higher than fifteenth, which was the championship leader’s worse finish of the year. Cairoli could barely believe he had gained 8 points on his rival in the circumstances, and perhaps this thought propelled Nagl to a lightning start in the second moto. Nagl held the lead for most of the second moto, conceding to Strijbos, who brought the house down with a last-lap pass to win his first moto since the GP of Czech Republic last August. The Belgian had only just returned from a wrist and thumb injury and admitted that he got lucky with the weather conditions and the slower, softer terrain. Nagl still managed to bag 22 points in the moto (compared to Cairoli’s 3), but the Husky man now has to keep an eye on the rampaging Romain Febvre, who overcame his own issues to take another overall victory.

The French MXGP rookie won his home GP two weeks prior with confidence, and his first-moto gap of almost twenty-five seconds over the rest of the field was as staggering as it was efficient. It was a memorable moto for Yamaha. Febvre took the flag, but 31-year-old David Philippaerts recaptured the hearts of the crowd thanks to his holeshot and second place for his best result in three years (two of which he spent arranging his own modest but immensely friendly GP team). In third was another YZ450F, with Jeremy Van Horebeek emerging from the cold for his first top-three of the season.

With the rain stopping by late morning and the humidity drying the terrain, the track reached its best state by the second MXGP outing. As Nagl and Strijbos enacted their chase, HRC’s Gautier Paulin was lonely in third—yet to show anything like the vicious form he displayed in Holland—and the order for the podium kept swapping as Waters faced pressure from leading privateer and perennially underrated Shaun Simpson (Hitachi Revo KTM), Philippaerts, and Febvre. The race-one winner had crashed climbing a hill veering towards the same line as Simpson. Febvre showcased his talent and hot form in his comeback to sixth to get the overall victory with 1-6 scores, and also with a handlebar bent back enough to make Ricky Carmichael wince and a broken front brake. Philippaerts looked set for a dream podium finish at his home GP (he lives mere miles from the circuit), but Strijbos’ big push knocked him down to fourth overall and allowed Waters to earn his first premier-class podium finish for Australia. HRC’s Evgeny Bobryshev had clearly been the fastest in the dry weather on Saturday, but two poor starts knocked him out of podium contention. His second-moto first-corner crash into Van Horebeek left the Belgian seething.

At the end of the weekend, Nagl had opened a 30-point margin in the championship standings. The German publicly admitted that he doesn’t even look at the standings in an effort to focus on the individual rounds, but only two rounds ago his red plate was under threat by Desalle with just a 4-point difference. Heading to his home Grand Prix next week, he can now afford to breathe a little easier and will be hoping that Febvre (38 points away) begins to feel the pressure, and that Cairoli’s fitness doesn’t significantly improve.

Red Bull KTM’s Jeffrey Herlings will undoubtedly star in that edition of the competition, and although he didn’t claim the overall victory in Italy—that honor went to HRC Gariboldi’s Tim Gajser for the second time this year—he pulled his gap at the top of the MX2 standings to 139 points with just 450 left this season. With a sputtering KTM and the mud in the first moto, Herlings only managed sixth place. He was back to business in the second moto, though, as he controlled the race, annoyed only by Monster Energy Kawasaki’s Jordi Tixier (who had crashed twice by this point), Standing Construct Yamaha’s Valentin Guillod (also a faller and nursing an injured right foot), and Tim Gajser at times. Third place belonged to Rockstar Suzuki’s Jeremy Seewer, whose 4-3 permitted the Swiss a second career podium.

Under the wet conditions, the first moto was a mere procession, with Alex Tonkov taking the holeshot and the moto win. However, the Russian couldn't replicate that speed later in the day, and two harsh moves, one on Seewer and the other on young Latvian Pauls Jonass, meant that he missed the podium with eighth place.

On the American front, there’s still no update on Ryan Villopoto’s status, and the lack of information on the former Monster Energy Supercross Champion’s rehab since moving back to the U.S. has been a factor that many in the Grand Prix paddock have found slightly odd. According to the Monster Energy Kawasaki crew, RV is set for another medical check-up next week. The dormant #2 machine still gains plenty of attention from European fans. Thomas Covington struggled in the MX2 motos and couldn’t bag any points in Italy.

The FIM World Motocross Championship visits Germany next in Teutschenthal, home of the 2013 Motocross of Nations.