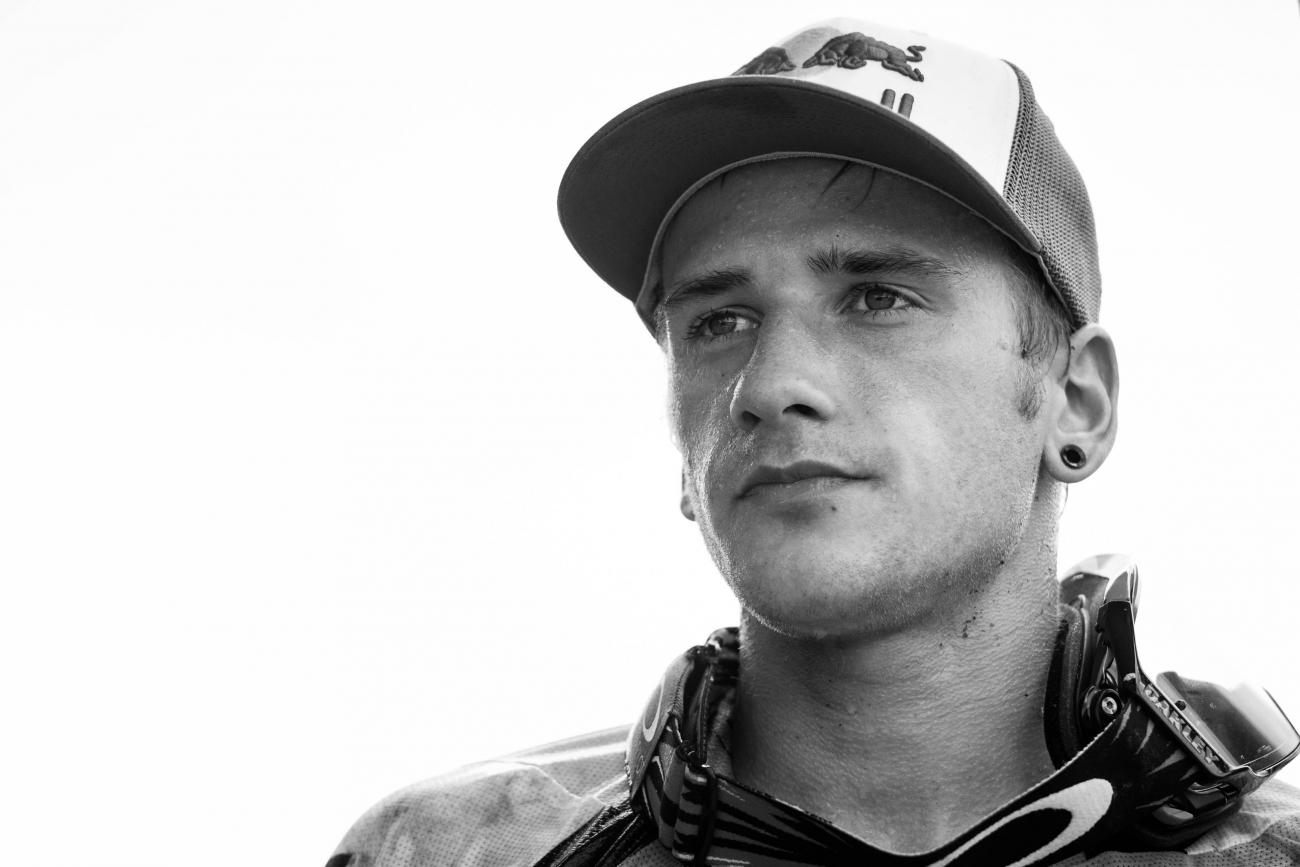 RCH/Soaring Eagle/Jimmy John’s Suzuki’s Ken Roczen made quite the statement at High Point on Saturday. In a tight second-moto battle with points leader Ryan Dungey, where the lead hardly wavered from under three seconds, Roczen clicked off the fastest lap time of the day (1:58.178) en route to the moto win and the overall—his first of the season. During laps 4–6, Roczen’s lap times were all under two minutes on the roughest conditions of the weekend. Roczen spoke with the media at the post-race press conference.

Racer X: Tell us briefly about moto one and then really about moto two and the pressure you were feeling.
Ken Roczen: Moto one, I got off to a decent start, but I bumped with someone in the first turn and then almost went down again and it kind of threw me back a little bit. I kind of got screwed up passing a little bit, and Ryan [Dungey] was just really aggressive and got up front. I was kind of messing around back there. So he was doing really good, and I just made a mistake. It’s just what it was. In that second moto I just really wanted it. I got off to a decent start and made my way up to the front, and that’s how it is when I have a clear track. At one point I was actually really surprised we were hauling butt. We were doing like fifty-eight [1:58] lap times or something like that. It felt awesome.

How about 58.1 right in the middle of the race, which was the fastest lap set all day long.
It’s great. And I still have so much more room for improvement. There’s just so much still. So we’re coming onto an off weekend, and I want to keep working and working and working. We do have a little bit of setback there [in points], and I think it’s important to do some great work and everything and keep pushing hard and on the weekend do something fun, but we’re going to stick to it and put our head down because the championship’s getting closer and closer towards the end. We’re about halfway or whatever, but I’ve got to start putting down two good motos instead of just one so we’ll be able to close that gap. It’s going to be tough, but it’s possible, so I’m just going to keep on.

How was the bike setup for moto one versus moto two? Did you guys go back and make more changes to it?
No, that was the first time this year I actually had the same setup in the first and second motos. Everybody’s always fighting for a little bit extra, but I think right now it’s important to stick with what I have and get stronger and put down motos. Like I said, get stronger, I think that’s the ultimate thing. We’ll get there. We’re working hard. Everybody’s working hard. We’ll do it. We’ll get out there. It feels great to get an overall now. I’ve been wanting this for a very long time. I’ve been struggling with a lot of things, injuries and stuff, so it’s great to keep seeing my progress week after week. It’s great to have my first overall coming into an off weekend.

Were you aware where Dungey was the last couple laps?
I knew he was somewhere there. I kind of peeked over when I was going around the turn, and I had a little bit of time and he wasn’t too close. Obviously it was one of the hotter races we’ve had, but I was ready to…because I knew he was going to probably try in the end again, but I really wanted the points and I was ready to go again. I saw him there, and I just kind of kept it steady. He was behind me the whole time. We were going really good, and for me it’s about putting together two really good motos. The first one was solid, but we need that little bit of extra.

Did the lappers mess your flow up?
Yeah, I had a couple of people there that went in the line where I normally went and it kind of messed me up. We all struggled with it. Sometimes I get through a little bit better or other people get through better. It really just depends. Also, when you’re leading, you’re the first one to see them. Once you get by them they kind of know there’s more coming. Sometimes I gain here and there, and sometimes he gains. It’s tough sometimes.

The 1:58.1 was the fastest lap of the day. Where were you at as far as your comfort level?
I had a clear track and I didn’t make as many mistakes as in the first one. My comfort was definitely a little bit better. I still think we can get better, and that just shows what we can do once we get everything right. It’s really just a matter of time. But it felt good to be able to ride that fast. It felt awesome.

It’s good because I definitely have a little bit of something to gain. I know Aldon’s [Baker] program and how hard they work and stuff, so it’s good to see where I’m at with what I’ve done. I’m going to stick to it, and I’m actually really happy with my program right now, which it really just takes time.

Do you feel like you have quieted the critics?
I don’t really care too much about what people say, but in the end you’re right. It shows that [the results at the first few races have] nothing to do with fitness or anything. Sometimes it’s comfort and bike setting. There’s a lot of things that come with it.

Are you paying any attention to the points lead? It that something you’re aware of?
Yeah, that’s another thing. Race after race I’ve got to try to put in two solid motos where I can make up points. Last week he gained a couple; now we’re the same again. I kind of got to start to make something happen.

The second moto you looked like a completely different rider. Did you do anything different?
The start is a big thing. When you have a clear lap you can kind of ride the way you want to ride. It helps that other guys get tired. The harder the race is, the better it is for the guys that are up there and fit. So everybody was going really good in the first race too. I think it was my fault because I didn’t have the best lines, and there was a bunch of things that add up, and I just couldn't make it happen in the first one.

What’d you think of the track in moto two?
I had a clear lap, so that helped a lot. I could actually take the lines I want to take and brake when I want to brake or throttle it when I want to throttle it, so that helps out a lot. I don’t know. I just always seem to feel better in the second moto where people usually don’t feel as great because they’re tired. But for me right now, and for comfort, I felt better in the second moto almost every single race I went to. But it’s good. It’s good to be strong in the second one, but we got to put together both of them.

Last year you were kind of struggling late in the second motos, and this year you’re feeling a lot stronger.
I felt good the first half of the season [last year], but I just think it got to where I didn’t get tired from not doing too much, I think it was obviously [because I was] doing too much. Right now I’m feeling pretty good. I’m really excited, though, with the program. I can go in the off-season and do it the way I want to do it together with [trainer] Clint and my dad. I think I can get a lot stronger than I am right now and that makes a difference throughout the whole year.

When you got hurt, did you think you’d be in this position right now?
As I got hurt, I didn’t think so. I’m kind of hoping [things hold together right now] because I do have a steroid [pain shot] in my back, so I can feel it sometimes more than I would like to. I don’t know if the steroid’s totally wearing off or not, so it’s kind of like…if you ask me how it feels right now I’m fine, but I can definitely tell that there’s something wrong. I hope it stays good and I can get it fixed at the end of the year.