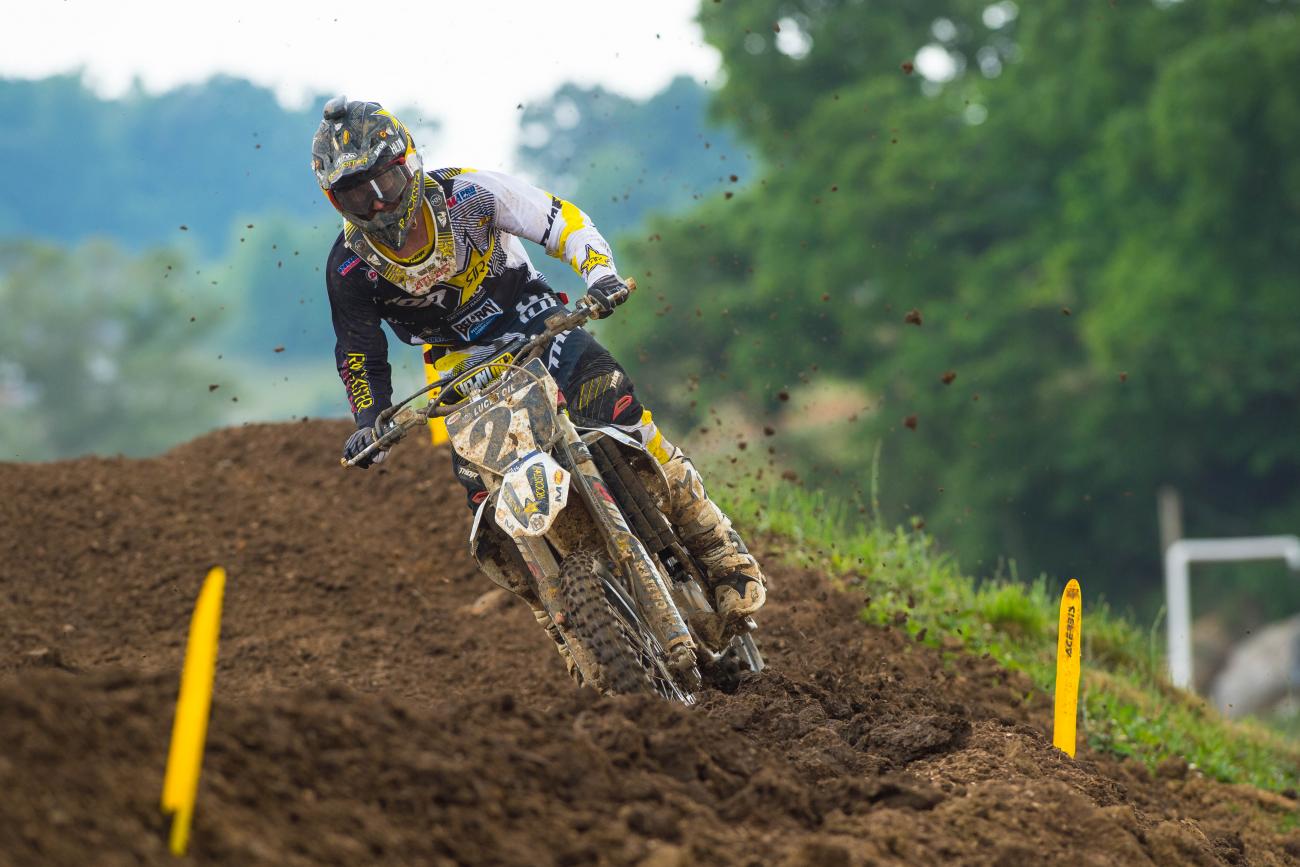 After three straight super rough tracks, the Red Bull Tennessee National wasn’t quite as gnarly. It rained prior to the race, but not as much as it had leading up to Hangtown or Thunder Valley, which ended up extra soft and extra rough as a result. There was a threat of rain throughout the weekend, and when that’s the case the crew usually doesn’t dig in as deep. It only started raining in the later stages of the final 450 moto. The track held up, but it caught some riders off guard. “I didn’t mind the rain,” Cole Seely explained. “But it was a little hard because I ran out of tear-offs when it first started raining. I had to use my thumb a few times to wipe the drops off so I could see.”

The usual suspects won motos—Ryan Dungey, Ken Roczen, Jeremy Martin, and Marvin Musquin. Beyond that, Rockstar Energy Racing Husqvarna’s Jason Anderson was probably the most impressive rider, with third overall in the 450 Class, including an amazing come-from-behind charge in moto two. “In the second moto my first lap was terrible,” he said in a team statement. “I didn't get a very good start. [Then] I got into a small incident that cost me some positions and pushed me all the way outside the top thirty. I just did my best and kept pushing. I made it all the way back to fourth for third overall. It was one of my best rides ever. Muddy Creek has been a track I've struggled with in the past, so to come out with a podium is awesome. Some of my favorite tracks are coming up, so I want to be on the box more in the next few rounds."

While this might have been Anderson’s best ride of the year (he also podiumed the Hangtown opener), it wasn’t as good of a day for his teammate Christophe Pourcel. "In practice I ended up third, which is a pretty decent position, but we are more focused on trying to get me more comfortable on the bike than doing lap times,” he said in a team statement. “That's just not the goal right now. In the first moto I crashed in the second corner when someone went down in front of me and I hit their bike. I was pretty much last and I came back to twenty-second. I was riding tight and not so good with pain in my arms. We made some changes to the suspension for the second moto, and it was better, but my gate position was way outside. I got a bad start around fifteenth or twentieth and just rode with the group around me. It was a bad weekend, so now we'll just try and rebound." Pourcel was sixteenth overall.

Blake Baggett went 5-3 for fourth overall and sits third in points. “I’m starting to figure things out,” Baggett said in a team statement. “We’re trying to make the bike a little bit easier for me to ride. I’m a small dude, so when the bike kicks around it feels worse than it really is. I’ve just got to get used to that feeling and get better and better each week.”

Baggett had made big changes to his bike for the first three rounds, but now his team is closing in on the right settings, and he only tried some fork changes this time. Yoshimura Suzuki also added plastic “wings” on the top edge of his radiator shrouds, as they anticipated deep ruts and Blake didn’t want to get his boot hooked on top of the shroud in a corner.

Filthy Freaking Phil. Nicoletti beat his Autotrader.com/Toyota/JGR Yamaha teammates with a fifth overall (4-9) and even led some laps in moto one despite coming up short on a jump in practice and crashing. After the race, we saw the JGR guys piled in the back of a pickup truck to get from one end of the pits to another, and of course Phil, who had already logged two hard motos, had to do the driving.

The other JGR Yamaha men, Justin Barcia and Weston Peick, had forgettable days. Peick told us he just couldn’t get into a rhythm, and Barcia crashed on the first lap while leading the first 450 moto and went off the track early in moto two. Barcia was eighth for the day, Peick ninth.

Cole Seely said he struggled with his line choice a bit in the first moto, but after a few bike changes the second moto was much better. “I got off to a great start and was running second for a while,” he said after finishing sixth overall. “It was cool to run that pace with those guys. I lost a few positions at the end and ended up fifth. All in all, it was a good day, and I really think I’m becoming a stronger outdoor rider.”

“Cole is building his confidence in his riding and in the bike, and adapting to the conditions,” said team manager Dan Betley. “He’s naturally more of a supercross rider than an outdoor rider, and it’s a totally different mindset to succeed in this environment. This is a good learning year for him.”

Seely’s fill-in teammate, Freddy Noren, continues to struggle with a sore knee. “Unfortunately, Freddie twisted his knee again during the first moto, but luckily, other than losing some positions, he was okay,” added Betley. “In the second moto, he was actually charging through the pack when he went down and ended up having to re-pass the guys he had just passed.” Noren finished twelfth overall with 10-12 scores.

Classic Broc Tickle day—good speed, so-so starts, and consistent results (7-7 for seventh overall). “The track got pretty rough. It was a little different than last week, but I felt good,” Tickle explained in an RCH/Soaring Eagle/Jimmy John’s Suzuki PR. “Second moto, I got seventh again. I had a much better start, so that’s the positive. Other than that, the second moto was a bit of a struggle. It took me too long to get going. I was able to pass a couple guys and then rode my way to seventh.”

No surprise here—Dungey took off from everyone in this moto.

One of the most amazing things this season is the gap the Dungey/Roczen/Tomac trio has had on the rest of the field in most of the motos. Tomac's out, but in this one Ryan and Kenny once again laid down fast laps around two seconds faster than everyone else. Jason Anderson had a good day, though, holding off Kenny in moto one and coming from way back here thanks to a late fast lap.

Seriously, Alex Martin has had the worst luck lately. In this moto he was down in a first-turn crash and then down again trying to pass through the pack. Second moto? Down in turn one again!

Jordon Smith! Watch out, kids like him, Plessinger, Hampshire (career-best fifth in this moto) are starting to figure it out.

After a breakthrough podium ride last week at Thunder Valley, bad starts ruined Zach Osborne’s chances at Muddy Creek. He went 9-9 for ninth in the 250s.  “In the first moto I got a mid pack start and fell on the first lap and left myself with a long ways to go, so I just put my head down and came all the way back to ninth,” Osborne said in a Rockstar Energy Racing Husqvarna team statement. “It was a great ride considering where I came back from, but certainly not what I was looking for. In the second moto I got off to a little bit better start in the top ten, but I fell on the first lap again. This time it was totally my fault, but I didn't lose as many positions, maybe fell back to around twentieth and came back to ninth again. I've had good starts all year, and I don't know what happened. Last weekend was really positive, and I felt like this weekend should have been the same."

Christian Craig also had an amazing Thunder Valley ride, just missing the podium in his comeback to racing, but this one wasn’t so good. “Today was rough,” he said. “Coming in I was really sick. After last week’s race I had a bad cold and struggled all week with it out in California. I wasn’t able to train and ride the way I wanted to, so coming in I wasn’t feeling too good. I qualified decent, but five laps into the first moto, I was coughing in my helmet, stuff was coming out of my nose. I was feeling bad. It wasn’t good, and I thought it was kind of dangerous to stay out there riding like that.”

Craig pulled off in moto one but returned for the second moto. “I had a decent start for how far outside I was,” he said. “I was ninth, went back to tenth, and then on the big triple jump, something happened when I landed. The chain got stuck and the bike wouldn’t even go. I pulled into the mechanics’ area, and it took five minutes to get it out. I was like three laps down. But I told myself I was going to finish, so I got back out there and kept going. Really disappointed in my day—I felt like I left the team down and myself down. That wasn’t me that was out there. I’m glad I have next weekend to come back and do better.”

GEICO Honda rookies Jordon Smith and RJ Hampshire have been showing signs of greatness lately. Hampshire scored a career-best fifth in the second moto and stayed on Marvin Musquin’s wheel to the finish. He finished eighth overall. Smith was down early in both motos but charged back to 14-6 scores, and even had the fastest lap of anyone in the second moto. Hampshire credits time back home in Florida and improved bike settings for his ride. “I get to be back home on the East Coast now, work with my trainer every day,” he explained. “But the time out in California was good, the team worked hard to get my bike where I want it. I’m a lot more comfortable. I like my bike setup now; we’ve just got to keep going every weekend.”

As for Smith: “Pretty rough day. I had two first-lap crashes in the first moto. I rode as hard as I could the whole moto,” he said. “The second moto was pretty much the same. I also ran into Marvin Musquin on the first lap, so it was pretty much the same, coming from the back. It was hot and a lot of people were fading. I’ve been training really hard down at the Millsaps Training Facility, and my fitness is amazing right now. I just kept charging and picking off guys at the moto went on. I think I had one of the fastest times of the race, so it was a good day. Character building, I guess.”

The FMF KTM Orange Brigade team debuted a new pro rider in Alex Frye, of Maryland. This gives the team three riders, with Dakota Alix and Daniel Baker already on board. Frye had bike problems in moto one but scored nineteenth in moto two, Alix went 18-17 for eighteenth, and Baker was running strong inside the top ten in a moto before a crash. This Orange Brigade team is a bridge between KTM’s amateur efforts and full-pro deals like Lucas Oil/Troy Lee Designs KTM and Red Bull KTM.

Speaking of the Lucas Oil/TLD team, Jessy Nelson was solid again, with another overall podium in third. His teammate Shane McElrath wasn’t so lucky, logging tenth-place finishes in both motos. But when the math shook out, 10-10 only gave McElrath twelfth overall.