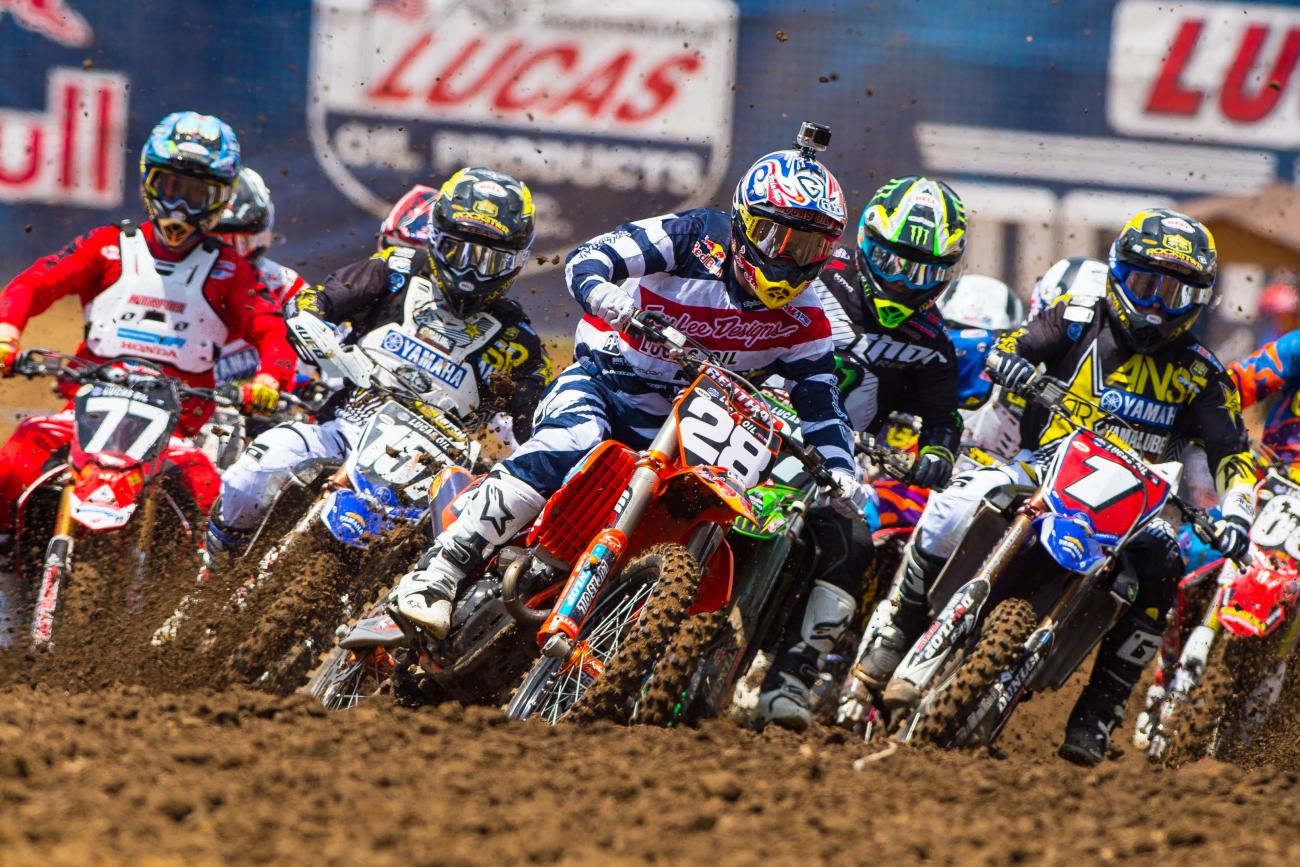 Troy Lee is loyal to the brands he believes in. He never wanted to leave Honda, but one moment in one race last year gave him pause. At Anaheim 1, his rider, Cole Seely, held the lead until the last lap. Jason Anderson was poised to make an attack, though, and Anderson plowed into Seely in the last turn to steal the lead and the win.

Anderson would later explain the secret weapon of his Rockstar Energy Racing KTM compared to Seely’s Lucas Oil Troy Lee Honda. Anderson’s bike had electric start, and Seely’s didn’t. Anderson knew if the pass got too aggressive and both riders went down—the classic pickup pass where the victory goes to whoever can pick his bike up and restart it the fastest—he’d win. His bike was certain to re-fire faster.

Reports are that Troy and the team tried to come up with a solution to the issue, which basically meant figuring out a way to add electric start to a Honda. Honda offers an off-road version of the 250 four-stroke called the 250X, but it didn’t make for an easy retrofit, and the team went on with kick-starters (of course, only the tiniest percentage of races come down to a pickup pass, but every point can count sometimes when trying to win a title).

Well, Troy Lee and his team found a way to get electric starters on their bikes: they switched to KTM. Lee being loyal to his old brand at Honda, it wasn’t a decision that came easy, but the partnership made sense on many levels, and ultimately it’s worked out well. Jessy Nelson busted out of the gate to win the 250SX Class at Anaheim 1, the team’s first race on the new bikes, and the squad has been strong since. Shane McElrath ended up second in the 250 West Region standings behind Yamaha’s dominator Cooper Webb, and now Nelson is back at the front of the pack in Lucas Oil Pro Motocross.

After a rough go at Hangtown, Nelson’s starts have been on point in just about every moto since. The results are also good, with 4-4-3-7-3-2 moto scores launching him into third in the series standings. He’s getting better each weekend, too. Nelson lost six weeks of riding during the West Region’s supercross break when he hit his head in a crash, and his fitness is still climbing back to 100 percent. He finally managed to go hard the whole second moto at Muddy Creek to log that season-best second. As he explained in the post-race press conference, that even surprised him a bit.

“I was getting a little fatigued, and then I took a lap or two where I just kind of cruised and like jumped through the bumps and just kind of caught my breath,” he said. “And all of a sudden I just started laying wood. I didn’t have enough for Jeremy [Martin], but I’m glad I finished strong and ended up second. Just building each week. Every Saturday is a good training day for me.”

Nelson, now in his fourth pro season, is starting to find the strength at the end of the races to match his speed at the beginning. And speaking of the beginning—those starts! He’s been the most consistent 250 rider off the gate lately, and it’s of course making a huge difference.

“I don’t know what it is—I hardly even practice them now,” he explained.

Nelson might not have a secret to his starts, but his bike packs the secret that Troy Lee started searching for last year. As Nelson keeps working on the finishes, the team will end up with the results they’re looking for too.