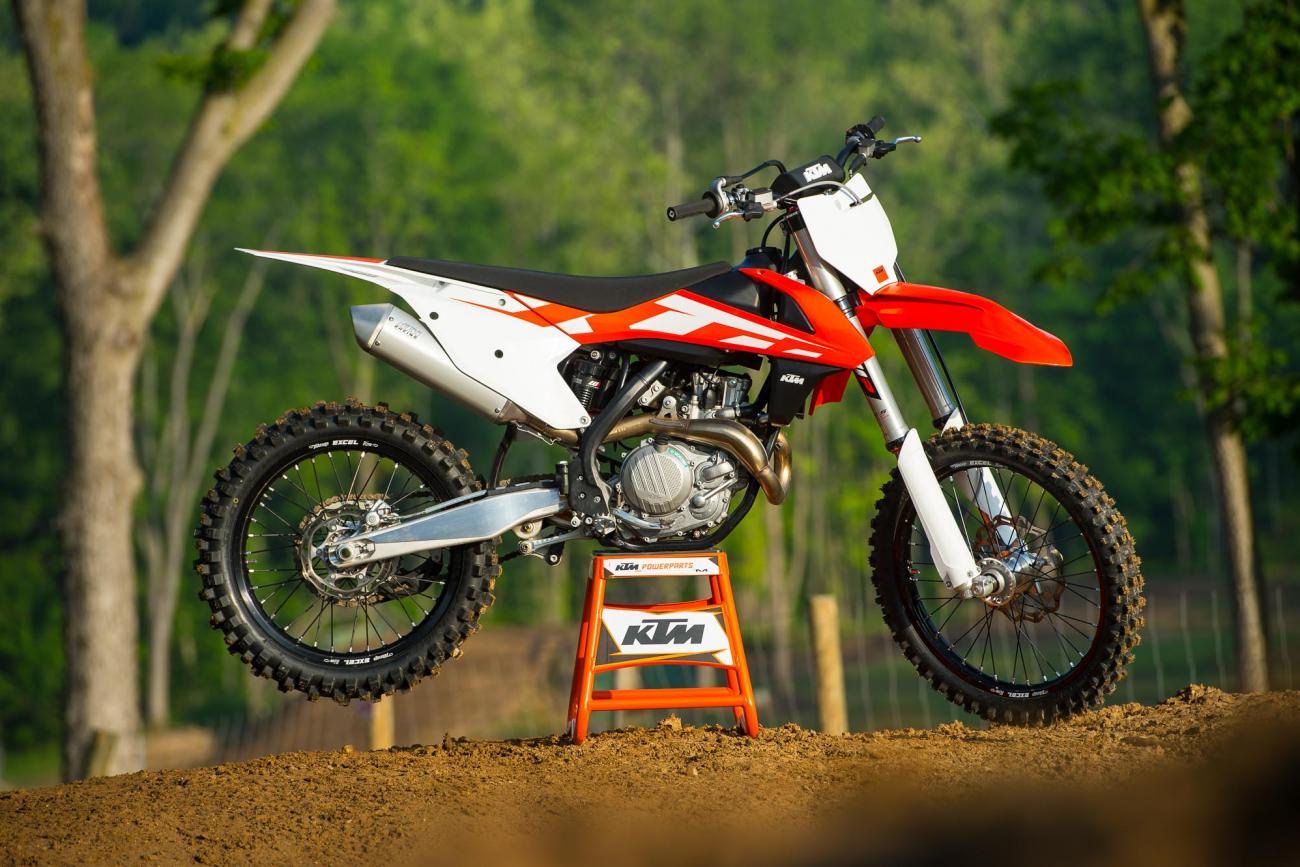 This 250 Words comes to you from a Holiday Inn Express in Crawfordsville, Indiana. Yes, we may not be professionals but we did stay at a Holiday Inn last night. Charles Bright and I just wrapped up the first full day of the 2016 KTM media launch at Ironman Raceway and are nonetheless impressed with what the Austrian brand will be offering consumers later in the year with its 2016 production lineup. We were able to put in some laps on the moto track as well as the woods loop, and I’d like to share some of our impressions from the first full day of riding.

For some reason, the first thing that came to mind when we were wrapping up the day was how so many people have compared KTM against the big four Japanese manufacturers. The popular opinion is, or was, that they’ve always had their own unique feel—a rider could hop on any Japanese bike and adapt fairly quickly, but the KTM played ball on its own field. Those days are gone.

I instantly fell in love with the 450 SX-F. I’ve read plenty of stats about how it’s shed 10.7 pounds, has a completely redesigned engine and chassis, and so on. You can read up on specs all you want, but numbers don’t always equate to a bike you love at first ride. The 450 cornered like a champ. Get that front wheel anywhere close to the rut and it seemed to do the rest. The power delivery was very linear, and there were no unexpected peaks from bottom to top, but that’s not to say it doesn’t get you going. The new engine boasts 62hp, yet was very predictable.

I’m not much of a four-stroke 250 guy, so I wasn’t quite as pleased with the 250 or 350 SX-Fs out of the gate, but I became acclimated after a couple laps. The handling of the 350 is very similar to the 250, but the thing revs to the moon, which was pleasing. It seems like the 350 lacks its own identity in regards to handling. It feels like a 250 with more power, but not like a big-bore 250. Linear power delivery was on par just like the 450. As far as the 250’s power, it had a good bark at three-quarter throttle and seemed to corner best when you kept it there. I was left wanting a little more on top, but hopping on the 250 first probably wasn’t fair. I guess we’ll flip-flop the lineup tomorrow. Charles was pleased with power and delivery from the 250’s engine.

Stay tuned for a Racer X Film from the 2016 KTM media launch coming next week. For more info on the 2016 lineup, check out our Breaking News postabout the bike’s release HERE.