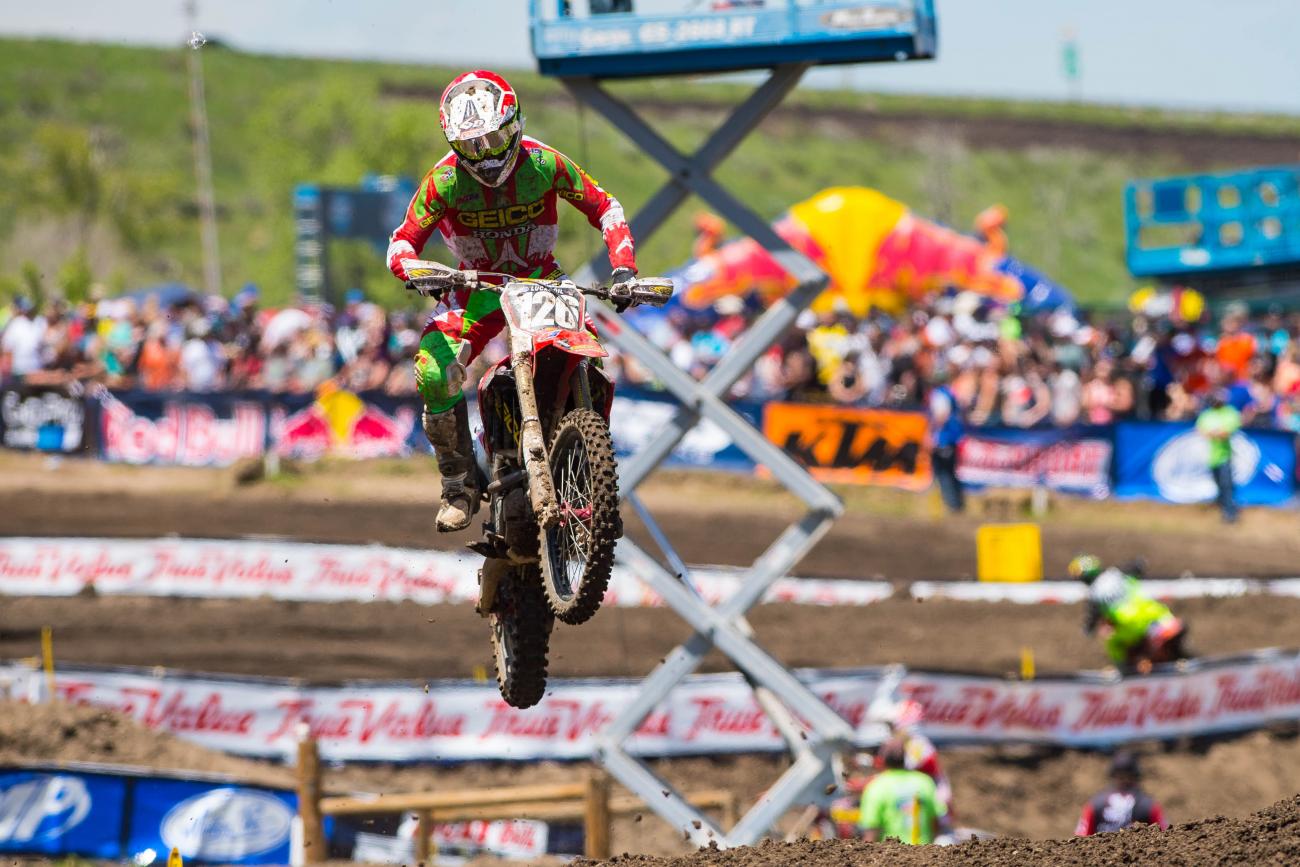 The champ is starting to come around after a rough start to the year. Last week at Thunder Valley, Roczen led laps, and if not for a crash caused by a flat tire late in the second moto, he would have won his first overall of the year. Sure, Roczen’s title defense might be on life support right now, but he’s getting better every weekend and there’s a lot of racing left—eighteen motos to be exact. We’ll see if Roczen can chip away at Ryan Dungey’s lead at Muddy Creek. – Aaron Hansel

The last thing you want to do is give Ryan Dungey the points lead. When he gets it he has a habit of padding it bit by bit like a merciless boa constrictor slowly clamping down. Need an example? Just look at what happened earlier this year in Monster Energy Supercross. The good news for everyone else is the squeeze is in its infancy right now—will it get tighter or looser at Muddy Creek? –Hansel

No, we’re not talking suspension settings here. Rebound is what Alex Martin needs to do after exceptionally bad luck ruined his weekend at Thunder Valley. He went over the bars in the first moto when his holeshot device got jammed, and he rode the second moto with no rear brake. It’s been fun watching Martin’s meteoric rise this year. Hopefully we get to see him ride to his unfettered potential this weekend. –Hansel

Dealing with major pain during the week, having your wife talk you out of a mental breakdown, and dabbling in archery. Apparently those are the keys to success in Lucas Oil Pro Motocross, because that’s what Osborne did the week before Thunder Valley, and then he went 2-3 for an outstanding second overall, his best career result. If Osborne shows up in Tennessee toting a bow and arrows, expect him to land on the podium again. –Hansel

In the 250 Class no single rider has solely owned the red number plate for more than one weekend in a row. Jeremy Martin had it at round one, Marvin Musquin and Martin both sported it at round two, and Musquin owned it at round three. But thanks to Martin’s 1-1 and Musquin’s misfortune last week, Martin’s got it all to himself yet again. Musquin now trails Martin by 2 points—will he, Martin, or both have the red plate after Muddy Creek? –Hansel

After a bummer weekend at Glen Helen, Broc Tickle put in his best ride of the young season at Thunder Valley. The RCH/Soaring Eagle/Jimmy John’s Suzuki rider finished fifth in both motos, which put him at fourth overall on the day. His ride in Colorado put three Suzuki riders in the top five, and that hasn’t happened in quite some time. Tickle was also strong at Hangtown before a rough Glen Helen. Can he back up a strong Colorado as the series enters its East Coast swing? –Troy Bendgen

The GEICO Honda team has operated like a family for most of the past decade. The majority of its riders rode for the team back when they were in the amateur ranks, which ensures an easy transition when they turn pro. It’s a tactic that has helped them become a top team in the pits. In Christian Craig’s case it truly is a family affair—of a different kind. Craig’s father-in-law, Jeff Majkrzak, is one of the GEICO Honda team owners. Last summer, Christian got a production 450 to race under the tent for a few rounds, and this year he got the call to fill in for an injured rider, in this case Justin Bogle. He didn’t disappoint. Craig logged the fastest lap time in practice and finished fifth overall on the day. He was 1 point off a podium spot as well. It will be interesting to watch Craig progress throughout his tenure with the team. –Bendgen

It wasn’t going to take long for Blake Baggett to come alive this summer. In only the third round he found himself on the podium via 4-3 moto scores. Now the question is how long it will take for Baggett to turn into El Chupacabra. Will Blake be able to step up his speed even more and be a threat for moto wins as we head into Muddy Creek and beyond? -Bendgen

In only his third round of professional outdoor racing Jordon Smith showed the motocross faithful what he is capable of. In the first moto at Thunder Valley he put his GEICO Honda into the top ten for the first time this summer, finishing in sixth. His second moto battle with Adam Cianciarulo was truly one for the ages. The two went back and forth like it was Loretta Lynn’s 2011 all over again. Jordon has found the race pace. Add one more rider to the list who can fight for the top five positions in an already stacked class. – Bendgen

The weather again is a topic in Lucas Oil Pro Motocross. Lakewood, Colorado, dealt with twenty-eight straight days of rain leading into the Thunder Valley National, and while the weather was perfect on race day, the rain still impacted the track. The huge layer of wet topsoil was pushed aside to find drier dirt underneath, but even that dirt was still soft enough to form big ruts. It’s been raining all week leading into Muddy Creek, although Saturday once again might be okay. The track crews only need a small window of dry weather to push the mud off and salvage the track, but previous rain can still be a factor via that soft dirt. How will the weather leading into the race impact it? – Jason Weigandt