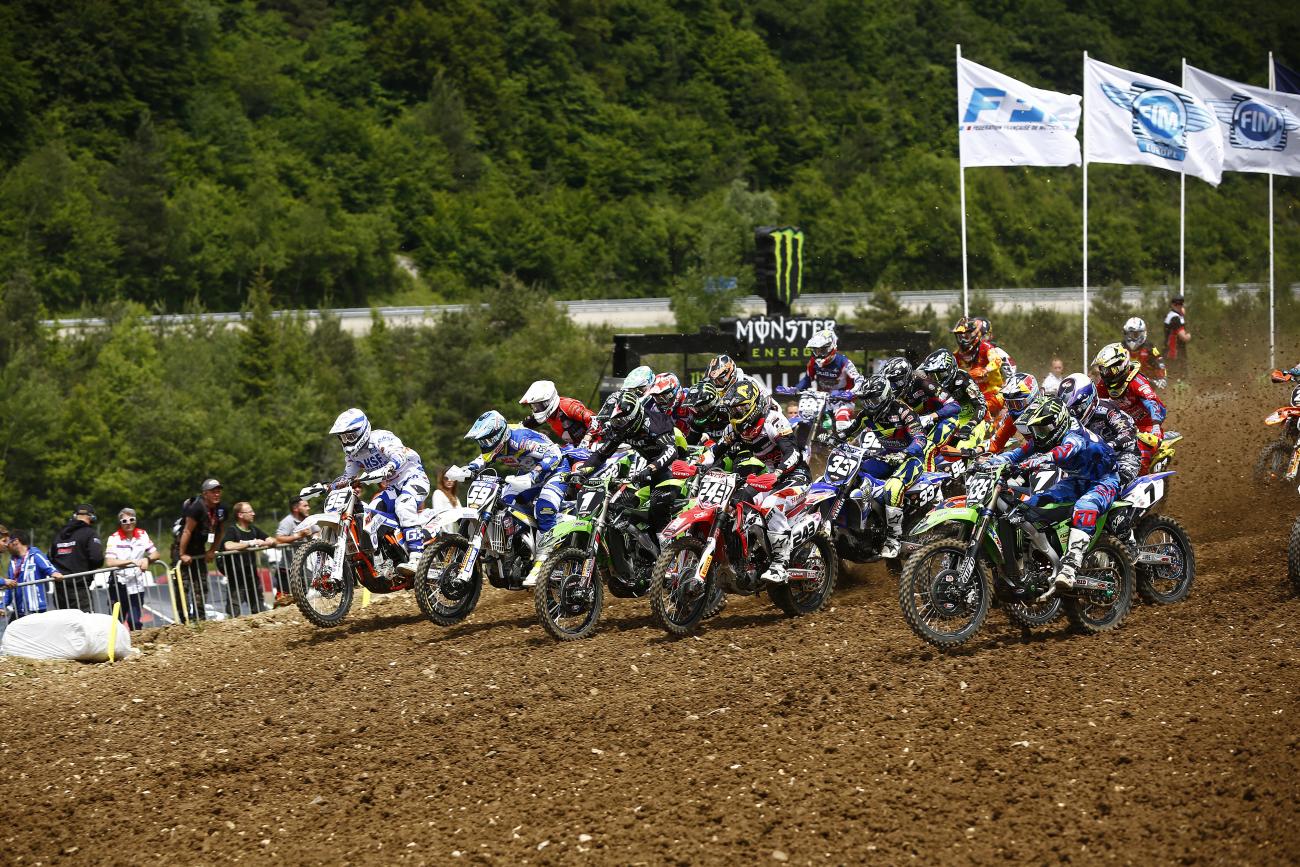 There was agony and ecstasy, disapproval and relish at Villas sous Ecot for the Grand Prix of France, round eight of the 2015 FIM World Motocross Championship. The largely French/Swiss public flooded the site that boasts the steepest hills on the calendar—a serious rival at least for Maggiora, host of round nine in two weeks—and some stony hard-pack that was unforgiving and unpopular in the paddock. Kemea Yamaha MX2 rookie Benoit Paturel felt the full force of French roost on Saturday, as a rock managed to break six of his teeth; the youngster somehow managed to finish the race and rode to a commendable ninth place in the second moto on Sunday.

The man of the meeting—and the man of the moment in MXGP—is Yamaha Factory Racing’s Romain Febvrel, a former European Champion that only took his first MX2 podium two seasons ago, his first win at the end of last year. Now, in a period of three weeks, he has secured an MXGP podium (in Spain), a moto victory (in the UK), and the pole position and overall triumph with a 2-1 in front of French fans, who are falling hard for their new hero. The irony that Febvre is renowned for his Supermoto skills won’t be lost on the more cynical of his rivals when you consider the typical soil of this track. It has to be said that there are long and concrete-like ruts by the start of the second motos, the technical level of the short course finally increasing.

In the first outing Febvre profited from a mechanical glitch from HRC’s Gautier Paulin while in second place, and threatened the rear wheel of Red Bull KTM’s Tony Cairoli for a number of laps without being able to dislodge the champion, who has now won three of the last six motos since climbing on the 450SX-F. In the second race Cairoli was held up at the start, and Febvre had Red Bull IceOne Husqvarna’s Max Nagl to chase; the German (struggling to come through the top ten in the first moto) was a more realistic piece of bait. Febvre moved past the points leader on the twelfth lap to make the crowd cheer and won by over three seconds.

“It is so crazy to win a Grand Prix at home,” the 23-year-old said. “I will enjoy this moment for sure. Last week I won my first heat. It has also been good for the championship. A big thanks to the team for all their work; we’ve done this together.”

Cairoli ensured his sixth podium finish, which is tied for most this season, but HRC’s Evgeny Bobryshev was a clear second overall with a 3-3. The Russian was emotional on his return to the box for the first time since the GP of Belgium in 2013 after a badly broken leg almost a year ago.

Speaking of injury, it seems that some shoulders can have too much weight to bear. Eli Tomac in the US, and Clement Desalle, Xavier Boog, and Thomas Covington here—it was a rough weekend for upper bodies. Tomac’s ailment at Thunder Valley was surprising as much as it was shocking, but Rockstar Suzuki Clement Desalle’s injury over here is also significant. The Belgian, right in the thick of this championship, has already lost a season and then a winter training period in the last four years due to shoulder problems. At the time of his crash in practice, the Suzuki man was only 4 points behind Nagl in the MXGP standings after six podium finishes in seven races. He was lucky to walk away from a subsequent double smash in the qualification heat due to restrictions of the injury and managed just one lap of the first moto before pulling out. “There is nothing to say,” Desalle stated. “I’m really sad. Yesterday it happened in half a second. There was a stone on the take-off, and I was on a slow lap. I will see the doctor tomorrow, and we will know more. Compared to my other injuries, then, it doesn't feel too bad, but I need to see if I have strength in the next few days. I would like to have some scans to see what is going on in there.”

Desalle saw a 4-point deficit turn into 41, but he knows that the series will return in two weeks for another back-to-back set of rounds. If the #25 doesn't have any good news, then another realistic title shot will escape his grasp.

Credit to Wilvo Nestaan Husqvarna’s Dean Ferris for a personal-best in the MXGP class with fifth-place overall. Nestaan is still shouting praise for the 350 thanks to the Husky’s FC model. The Australian contingent again also saw strong starts from countryman Todd Waters. Rockstar Suzuki’s Glenn Coldenhoff was also lively in the second moto, reaching the top five in his rookie term. Leading privateer Hitachi Construction Machinery Revo KTM’s Shaun Simpson deposed of factory brand-mate Ken De Dycker with a charge to seventh in the first moto, but it was a preview for his charge from second-to-last to eleventh in the second moto on a track the Scot clearly disliked.

The MXGP of France was the second round for Mike Alessi. The American participated in the press conference on Saturday evening and commented on his regard for the MXGP series and how it fits in with the Smartop/MotoConcepts team’s diverse participation this summer. Rider and crew will travel to Canada before finally entering the Lucas Oil Pro Motocross Championship at Budds Creek. Alessi is still catching up with race time in the wake of his injury at the Daytona Supercross, but talked about his sympathy for Ryan Villopoto’s tough acclimatisation to Grand Prix-style racing before also mentioning that his team is considering the FIM World Motocross Championship in 2016 (Alessi raced the Northern Irish GP in 2005 and the American GP at Glen Helen at the beginning of the decade).

Red Bull KTM’s Jeffrey Herlings had gone through two MX2 Grands Prix without victory, but without the back pain picked up three weeks ago in Spain, he was a little more like his usual self in France.

He worked up the crowd by “dropping” the 250SX-F while leading the first race, and allowed Monster Energy Kawasaki’s Jordi Tixier and Standing Construct Yamaha’s Valentin Guillod to share the lead for moments, satisfying the two main demographic groups around the fences, the French and the Swiss. It wasn’t long (lap seventeen of twenty) before he was back in control and Guillod was fiery in second. The Swiss’ chance of three overall wins in a row went down with his Yamaha in a spectacular crash in the opening stages of the second moto. The club at Villars haven’t prepped a GP track since 1998, and they need to refine their watering application, as the coating before the motos created slick spots that were perilous. On this occasion Guillod had to veer left to avoid an out-of-shape Tixier and was clattered by fellow Yamaha rider Damon Graulus. It’s a testament to Guillod’s form and confidence that he took a horrendously bent YZ250F with a dislodged front-brake lever from the rear of the pack to thirteenth while nursing two bashed shoulders and a sore right foot.

Herlings faced opposition from HRC’s Tim Gajser in moto two. Gajser needed most of the week to recover from his concussion in Great Britain. Tixier kept in third and collected the same podium spot for a fifth podium appearance. Herlings’ success brings the 20-year-old to a 113-point advantage over Guillod through less than half the season passed. That’s almost five motos with twenty still to run.

Thomas Covington was a non-starter after banging his shoulder on Saturday and suffering from pain and a lack of mobility Sunday morning. The 18-year-old will have the joint checked out on Monday, but the Monster Energy Kawasaki crew are hopeful it’s just a muscular problem. The Kawasaki collective were out of luck with Tyla Rattray nursing a sore elbow and thigh (and last position in the start gate) after a crash on lap two of the qualification heat on Saturday, and Ryan Villopoto-replacement Xavier Boog apparently broke a shoulder in just his second ride on the works KX450F.

Kiara Fontanesi won a dramatic fourth round of six in the women’s series. Livia Lancelot passed the Italian to great cheers in the first moto on Saturday but crashed into the stricken Francesca Nocera and broke a rib. After Fontanesi’s accident in the UK that permitted Lancelot to ascend the top step, just 8 points split the two rivals for the 2015 crown. Kiwi Josiah Natzke, one of Ben Townley’s tutored junior crop, earned his first EMX125 European Championship victory in the fifth round of seven for the two-stroke kids.

More hard-pack lies in store in two weeks with 2016 Motocross of Nations site Maggiora in Italy prepped to host its third Grand Prix in as many years.