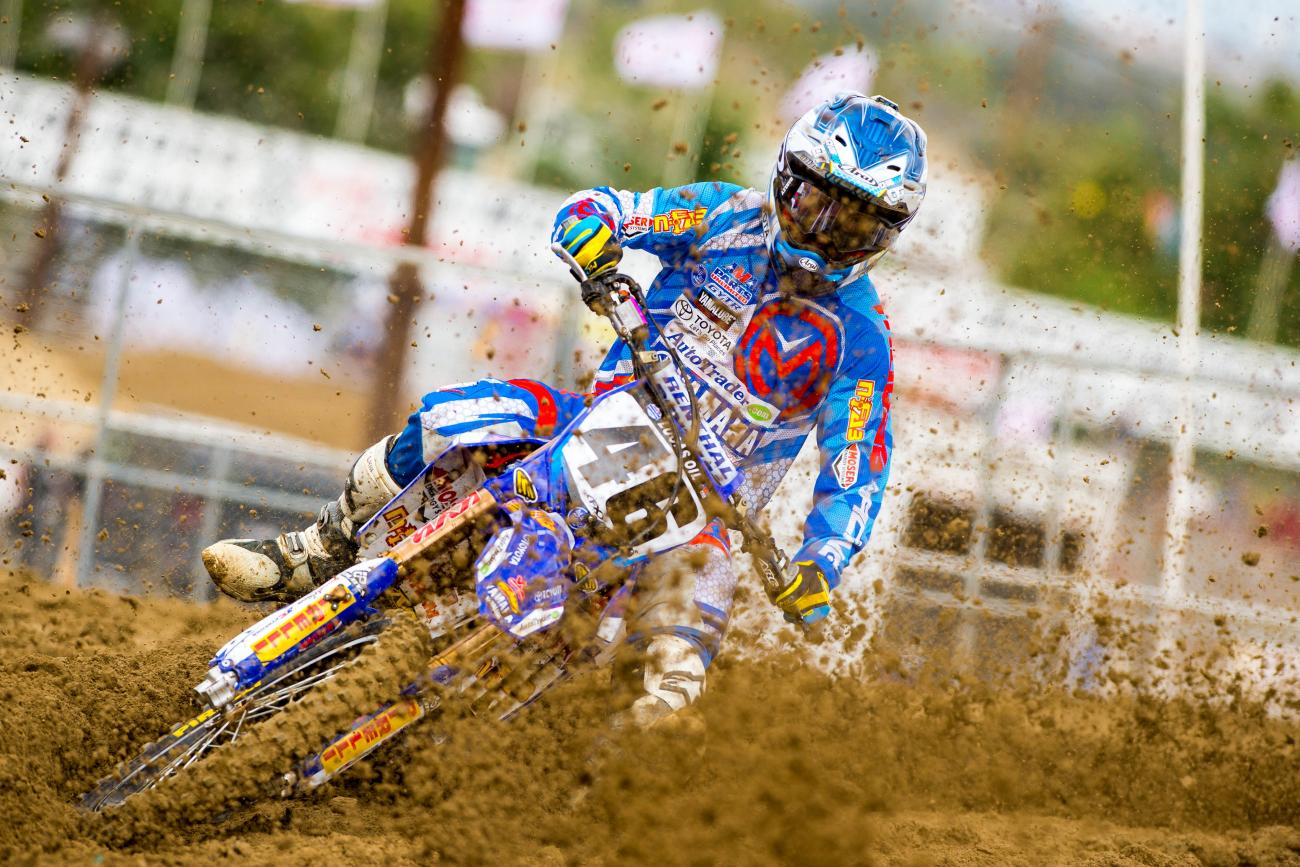 Although they don’t train together anymore, for a while in the pits it was the “Filthy” Phil Nicoletti and Alex Martin show for us at Racer X every weekend. Generally you could find one of them at the other’s truck after the race, or when they both rode for the defunct Eleven-10 Mods, they would be there together commiserating on their days. For a long time, Martin and Nicoletti were just a couple of guys grinding away, hoping to get into the top ten.

One guy would bust on the other for one thing or another(usually Phil making fun of Alex), and they would both wallow in their misery of one bad race or moto. It became a running joke to us on the Racer X staff to make sure someone talked to one of those guys for some laughs and to listen to Phil talk about how much he sucks at racing, with Alex chiming in how he thinks Phil needs to quit.

It doesn’t look like either guy needs to quit now, though

Martin, with CycleTrader.com/Rock River Yamaha, enters the third round of Lucas Oil Pro Motocross ranked third in 250 points with a moto podium. Nicoletti, on the AutoTrader.com/Toyota/JGR Yamaha, just collected his first-ever 450 podium with a third in the first moto at Glen Helen. It seems like the life-long buddies needed to separate to take their games up to the next level. Martin’s been hooked up with his brother Jeremy (you might have heard of him; he’s the defending 250MX champion), and Phil’s stayed out at what used to be their home base at Club MX. But Nicoletti’s been doing a lot of riding with his teammate Justin Barcia and it’s paying off.

Afterward, in his usual self-deprecating style, Nicoletti wanted to talk about how Ryan Dungey’s bike issue that happened on the last lap that gave him the podium was karma coming back to help him.

“Gifts happen all the time. Whatever. It’s racing. I’ll take it,” Nicoletti said. “I’ve gotten the shaft so many times, so I don’t even care anymore. I’ve had plenty of times where I’m having a good moto and I run out of gas or something. At least the good Lord was looking out for me that time, and even the second time when I augured myself. It was good.”

And getting Barcia, the marquee rider on the JGR team, down at Club MX has been a good thing for “Filthy.” That first moto at Glen Helen was similar to what the two guys had been doing during the week—just a couple of guys doing their motos.

“It’s hard for him [Barcia] because he didn’t have anybody in front of him to pace, and I had him. So I could see where he was gaining me and where I was even gaining him,” Phil said afterwards. “I could pick up his lines and use my lines to catch him. I found out some ways to hop some bumps and make up some time, but he’s solid. He’s a fit dude, and he knows how to handle that type of situation. He just kind of pulled me in, which was good. I’ve been riding with him at Club and he’s an awesome training partner. We’re going to continue that for a few more weeks and hopefully we can continue that here on Saturday. Like I said, our bikes are fast off the start though. Holy crap. I don’t think there was anybody else around us.”

In the second moto Phil was fourth on the opening lap when he went down pretty hard and knocked the wind out of himself. Gathering himself together and starting last, he fought hard only to finish one position out of the points. And Nicoletti being Nicoletti, all he could think about was how that third was going to be erased in the overall scoring.

“I went down again [in that moto] or else I would have scored some points. I basically rode thirty-five minutes for nothing. So that sucked,” Nicoletti said of the second moto. “Actually, the whole time I was just thinking, ‘Man, I’m not even going to get in the top ten [overall] with a podium.’ That’d be the first time ever. I got ninth, which just sucks. I was bummed. I wish at least I could have gone 3-6 or 3-7, or geez, even 3-9 for God’s sake. But it is what it is. Definitely some highs and some lows, but I think the highs today outweigh the lows, for the first time in my life.”

There’s the Filthy Phil we know!

What did Phil think of his buddy Alex going from thirty-fifth to eleventh in moto one and then riding great to get a second in moto two?

“I was stoked. I saw him out there, pulled the holeshot, led for a little bit,” Nicoletti said. “And then I got dressed, and I come out and he’s still in second. Then he had a pretty big gap. I’m just like, holy sh**, he’s going to do it. And then he did it.”

And what was Alex’s reaction to Phil getting the podium?

“I was pumped. If I didn’t have to get ready for my moto I would be high fiving him,” Martin said of Nicoletti’s performance. “He was fourth. We were on the line, and when they said Nicoletti was third, we were all cheering. It was cool. I’m pumped for him. He’s been grinding for years like me and that’s awesome.”

We don’t have to go out of our way and search for either Nicoletti or Martin in the pits afterward to listen to these two crack on each other. Nope, the way they’ve been riding early this season, it’s an interview that we now have to get, because these are podium guys. And that’s fine with us. Good job, boys.

Not surprisingly, Phil now feels the need to bounce back from the weekend even though it was in many ways the best weekend of his career.

“Hopefully I can redeem myself this week compared to last week,” Phil said. “So maybe the two pricks [Martin brothers] won’t bag on me this week.”