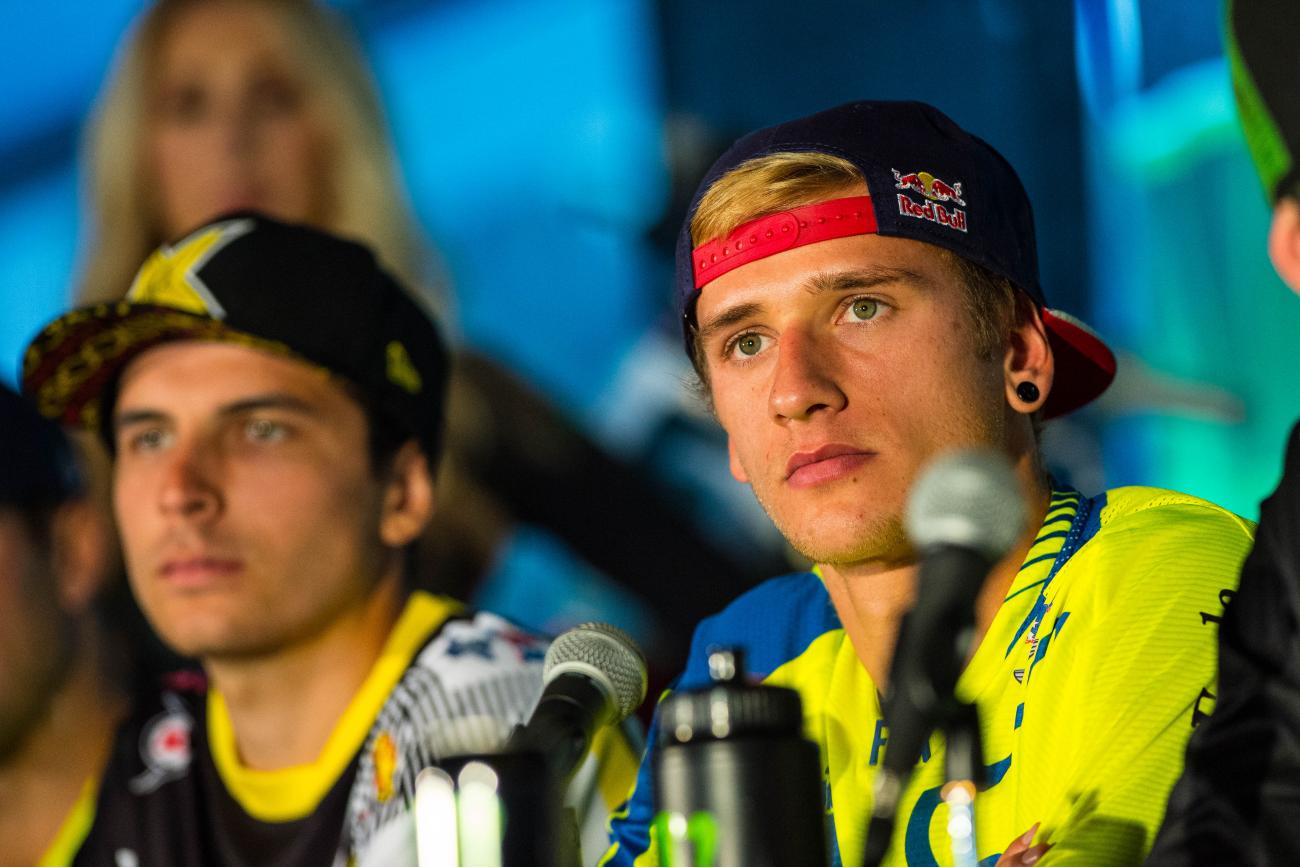 For 2015, Racer X has partnered with MotoDynasty to bring you Fantasy Motocross. We’ll be offering cool weekly and yearly prizes; dynasty play; private leagues that just you and you’re buddies can play in; weekly fantasy previews; and weekly podcasts all focused on fantasy. This may be the first time many of you have played, so we’ve put together some notes on how to play (you can read more here) and also a Lucas Oil Pro Motocross preview.

A lot of you are new to Racer X MotoDynasty, so we will review the essentials on how to play, the rules, etc. If you’re a returning user, you can skip to the bottom for class previews.

2.) Play Options: Once you’ve signed up, there are a couple different ways you can play. If you think you’re a fantasy God, you’ll want to challenge thousands of others for the season and weekly prizes. Yes, there is a fee to be eligible to win prizes. Don’t feel like ponying up a few bucks? Don’t worry, you can play for FREE.

There are two options:

1.) Test your skills against the field in Dynasty Play. (Note: You’re not eligible for yearly or weekly prizes playing for free.)

2). Create or join a private league with your buddies, co-workers, families, the dude at the local watering hole—whoever. You can talk smack on your way to the league title.

3.) Now that you’ve chosen which option you wish to play, the hard part is here—picking riders. (You can choose to participate in just 450, 250, or both.) You’ll need to pay attention to this next part. You do not have to fill all twenty positions on your race card. You can play just one racer, seven, four, or twenty. It doesn’t matter. If you’re playing competitively, obviously you will want to score the highest amount of points possible, so playing all twenty-two spots is the way to go. But, if for some reason you don’t feel comfortable picking the last guy in the main, you can just play your favorite races. You could also make a gentleman's agreement in your own private leagues to only pick a set number of riders. If you're gentlemen, of course.

MotoDynasty scoring is based solely on accuracy. When making selections, you are placing your picks in the order you think they’ll finish the main event. Example: Eli Tomac kills qualifying, and you think he’s going to go macro on the field, so you’ll want to pick him in the top spot. For you first timers, scoring can be tricky, so we’ll break it down.

1.) All riders (1-20) hold a value in this league. With that said, you’ll receive more points for choosing first place correctly (50 points) than getting twentieth correct (27 points). But, making the correct choices for riders 11-20 hold a lot of value and will be critical for gaining maximum points.

2.) But, what if I pick Ken Roczen to win and he get’s fifth? Do I lose a ton of points? No. You never “lose” points in MotoDynasty. MotoDynasty works on what is called a Scoring Matrix. We won’t bore you with details (you can check out the table below for more), just know that for every position a rider finishes greater or less than your original pick, your points value decreases. Let’s use the earlier example. You picked Ken Roczen to win. He didn’t. He finished fifth. So, instead of receiving the maximum 50 points, you will only receive 17. But, what if Roczen crashes and finishes twentieth? You will only receive 2 point. (Check out the matrix below for how it all breaks down.)

3.) Okay, you say I won’t lose points, but what if I pick rider X to make the top twenty and he doesn’t, what happens then? This is pretty simple: You still will not lose points, but you’ll receive a score of zero.

Now that you’ve made your picks, you have the option of making bonus selections. If you’re wanting to make up ground, are feeling lucky, or just have a hot hand, this is for you. There are three options: Pole Positions, Moto Winner and/or Main Event Holeshot winner. Be careful, though, while you can gain ground, you actually can lose points in bonus scoring.

Lucas Oil Pro Motocross will be a little more difficult than Monster Energy Supercross. The 250 Class is no longer split into two regions; 450 outdoor specialists—like a Fredrik Noren for example—become much more prominent in your selection process; and privateers are at much more of a disadvantage. Let’s start with the 450 Class.

Brett Metcalfe | 2014: 4th
Before Metty heads to Canada for the majority of the summer, he will race the first round of Pro Motocross at Hangtown. In a fill-in role with Monster Energy Kawasaki last summer Metcalfe finished fourth overall. More importantly, he went 4-5-6-9 at the first two rounds (Glen Helen and Hangtown). Don’t be afraid to slot the Australian inside your top five.

Josh Grant | 2014: 8th
Use caution here. Grant is a speedster outdoors, but he had a big crash earlier this week that could affect him. He tweeted that he expects to race Saturday, but keep an eye on his status—it could change. If he does line up, I still think he fits into the top ten—he’s got too much talent not to.

Fredrik Noren | 2014: 10th
Don’t forget about the Swedish privateer hero. After getting scooped up by factory Honda last summer, Noren was a top-ten machine. He’s got great support this year—MotoSport.com/GPI Honda—and has been testing the last few months since packing it in early for Monster Energy Supercross. He did have small surgery to repair his meniscus recently, but he should be 100 percent this weekend. Top ten is a must.

Phil Nicoletti | 2014: 15th
Another guy that we must remember. Phil got a lot of “fill-in” time in supercross due to Justin Barci’a injury, and he’s been preparing for outdoors since Barcia returned in Houston. He should be rested and prepared for Hangtown. He went 23-11 here last year, but 8-12 is a good pick.

Sean Collier | 2014: 29th
Collier typically only races the first couple rounds near his home in California—but he kills it every year. This is definitely where knowledge of the sport wins out over guessing. Last year Collier went 15-16 here. I like somewhere around there again.

Matt Lemoine | 2014: 18th (250MX)
Lemoine jumps up to the 450 after riding the 250 the past few years. Lemoine does have experience in 450MX, last racing the class in 2012. His best finish was twelfth overall at Thunder Valley. Slot him somewhere in the top fifteen for the first few rounds until you get a sense of where he fits in this year.

Vince Friese | 2014: Canada
While his teammate, Mike Alessi, will miss the first two rounds (at least) to contest the FIM World Motocross Championship, Friese is staying home and will ride the 450—at least for a few rounds anyway. He had success in 250MX in Canada last summer and, like Lemoine, has previous 450 experience in supercross and motocross. He last raced 450MX in 2013, with his best finish fifteenth overall at High Point. Like Lemoine, see where he fits in before picking him for top ten.

Tommy Hahn | 2014: 31st
The former factory Honda rider is back for a full-time schedule in 2015. In just three rounds last year, Hahn had one moto top-ten. He’s got good equipment—see Fredrik Noren—and should be a top-fifteen fixture. He’s not a bad pick for a sneaky top-ten performance either. Decisions, decisions.

Alex Martin | 2014: 12th
The elder Martin is coming off a career year in supercross and is firing on all cylinders heading into outdoors. He’s currently training with his brother, Jeremy, the defending 250MX champion, and the legendary Johnny O’Mara. Alex typically does most of his damage once the series moves east, but he did go 12-13 here last year. Top ten overall is a good fit.

Jessy Nelson | 2014: 9th
Nelson seemed to take the next step in his third year (outdoors) in 2014. Inconsistency still plagued him, but the speed was there. He’s a California kid, which should benefit him at the opening two rounds—Hangtown and Glen Helen. Most predict him to take another leap in year four. Top ten overall should be a lock, and a podium may not be out of the question.

Mitchell Oldenburg: 2014: 40th (250MX); 25th (450MX)
The privateer from Texas by way of Minnesota finally gets his shot with factory support. Oldenburg replaces the injured Darryn Durham on Lucas Oil/Troy Lee Designs KTM—for the first five rounds at least. He doesn’t have a ton of time on the bike—he just started testing last week—so proceed with caution until he gets more seat time. For now, 10-15 seems like a good starting point.

The Rookies
Most of the 2014 graduating class got their feet wet outdoors at the last three rounds last year—RJ Hampshire, Chris Alldredge, Nick Gaines, Luke Renzland. But Hangtown will mark the Lucas Oil Pro Motocross debut for three rookies: Aaron Plessinger, Jordon Smith, and Daniel Baker. Smith and Plessinger were injured at Loretta’s last year, while Hangtown will be Baker’s debut. (Learn more about Baker in this week’s Privateer Profile.) I think the advantage goes to the ones with experience, but don’t be shocked if Plessinger gets off to a solid start.

Zach Osborne | 2014: 22nd
It’s a shame we didn’t get a healthy Zach Osborne last year. In 2013, his first year back from the GPs, Osborne had two overall podiums and an additional six top-five overall finishes. Osborne is an after-thought entering the opener to some—don’t make the same mistake.

Kyle Peters | 2014: 20th
Peters bounced back from a tough 2014 season in supercross. Outdoors may be tougher on the North Carolina native. He had zero moto top-tens a season ago and finished twelfth or better just twice. With a new team—MotoSport.com/GPI Honda—those results could improve. Give it a few rounds before doing anything rash.

Anthony Rodriguez | 2014: 19th
If you’re a betting man, then you enjoy the high-risk, high-reward options with A-Rod. The likeable Venezuelan teases you with unbridled speed. The pieces are there, if he can harness them. Play it safe with him at first.

Cole Martinez | 2014: 26th
The surprise of the 250SX West Region is headed to Canada for the summer, but will race Hangtown this weekend. He has a great team—Monster Energy Thor Kawasaki—but is coming off a supercross season in which he rode Yamahas. Top fifteen is not a stretch, though.

These players took the risk, and it paid off. Check out the top ten Bonus Picks players from Monster Energy Supercross.

We will be giving away weekly and grand prizes for Fantasy Motocross. Weekly prizes will vary, with Thor giving away some great stuff this week. We are also pleased to announce our Grand Prizes. Thanks to all our great sponsors: Scott, Never Summer, Bell, EVS, TCX, Renthal, Fugoo, Leatt, and Alpinestars.