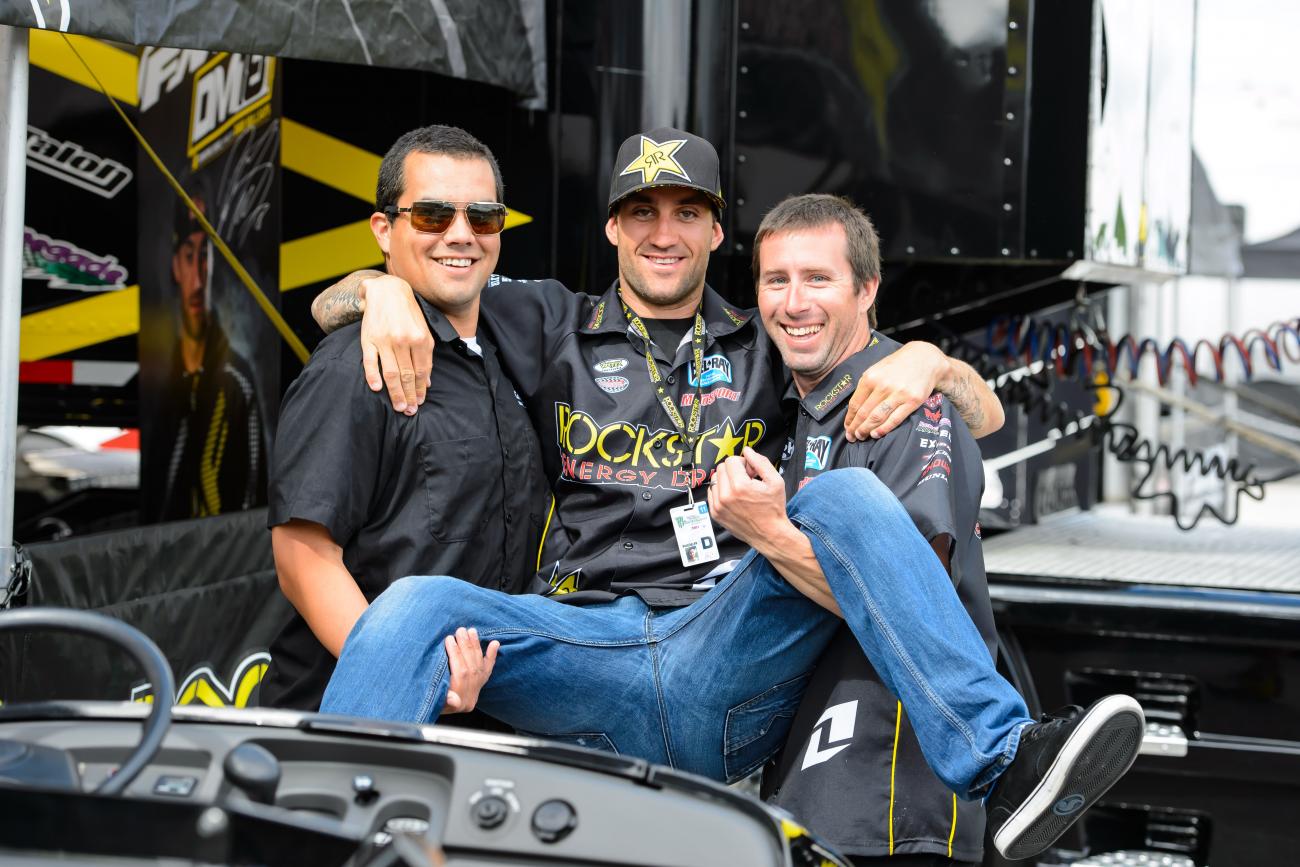 It was a surprise when Monster Energy Kawasaki terminated its deal with star rider Davi Millsaps. Millsaps, while not having the best year, is still a great rider and was a top-ten guy most weeks after coming back from missing the entire 2014 season with injury. And, let’s not forget, he did win the 2014 Monster Energy Cup.

So, yeah, he’s a really good rider and I assume he still wants to race dirt bikes for money. Going off that, what’s next for the #18?

Let’s break down some teams and talk about why it would work and maybe why it wouldn’t (and read this with a heavy dose of sarcasm).

-They no longer have that 2009 bike that Millsaps hated with a passion when he was there the last time.

-All three of Honda’s riders have won races this year, so maybe that luck would rub off on Davi.

-He could get a head start on 2016 when one of the Honda riders named Eli Tomac takes his spot on Monster Energy Kawasaki (uh, wait, just a rumor, bro).

-Showa or KYB? He can pick a suspension company like picking burrito fillings at Chipotle. Who doesn’t like Chipotle?

-Lots of Japanese engineers around there these days, so maybe Davi could pick up a second language. I heard a Rosetta Stone ad the other say saying that’s more important than having a nice car.

-But, speaking of, Davi could get himself a deal on one of those sweet Ridgeline pickups.

-The team no longer has Muscle Milk as a title sponsor, so Davi can keep running whatever energy drink wants to back him—Monster seems like they’re sticking around.

-I bet the team still has #18 backgrounds lying around ready to go.

Why It Wouldn’t Work

-Honda is familiar with him since he rode there before.

-They realize that the oft-injured Millsaps missed over thirty races in the five years he rode for the team.

-One time, a Honda guy told me that he’d rather fly across the country to test with a rider rather than drive to Glen Helen to test with Davi, so that’s not good.

-Davi gets a Ridgeline, but what if he “pulls a Villopoto” and says on the podium, “Meh, get a Raptor. That’s a real truck!”

-Honda’s spending a lot of money on Canard and Seely and probably can’t afford Millsaps anyways.

-He won approximately 745 amateur titles on a Suzuki, so maybe the magic can come back again on yellow.

-In 2013, he was back on a Suzuki 450 with the Rockstar Energy team and did awesome, so he clearly likes the bike.

- I bet they still have some #188 backgrounds in the shop and they’ll fit right on—just chop off the last "8."

-The RM-Z450 has not had a problem winning races lately, be it Millsaps in 2013, or James Stewart and Ken Roczen more recently.

-James Stewart is from Florida and so is Millsaps…yeah, we’re stretching here.

-This team has survived the latest Stewart drama with the marriage in tact. Any baggage Davi brings over will seem light in comparison.

-Jamie “the people’s champion” Grosser might try to charge Davi money to run a more familiar #118 like he did on Suzukis back in the day.

-They have Stewart and a pretty impressive Blake Baggett, so they appear full right now.

-Although the Stewart controversies will be over in a few months, I doubt they can afford to handle another guy that has set the pits on fire with controversy at this point.

-Davi, after some so-so years at Honda, rode well at times for the JGR Yamaha.

-For sure, the new YZ450F is much better than he would probably remember it.

-He got five podiums for JGR over the two years he rode for them, and second in 2012 SX points. That’s not too bad.

-We’re sure that Coy Gibbs and Davi would enjoy being reunited and just insulting each other all day long like the old days.

-Davi does have a tendency to get hurt, so fill-in rider Phil Nicoletti will be there when the inevitable happens.

-There would be very little pressure because Coy Gibbs would probably just play video games in the truck instead of actually watching the races.

-Hey, I would bet the team still has #18 backgrounds ready to go.

-Just a hunch, but the team has enough going on with Justin Barcia, Weston Peick, and Filthy Phil, so do they have time to deal with Davi?

-The team seems really happy with just two riders to the point where Phil just sits at home and waits for someone to be injured.

-At some point Peick and Barcia and Millsaps would collide out there, and someone, or all of them, would get mad.

-Maybe he wouldn’t want to give Barcia some gas when he runs out in the dunes.

-Actually, Millsaps didn’t seem to like the Yamaha all that much once he was off it.

-Everything KTM is touching is turning into gold, so why not go for the ultimate reclamation project?

-You know who’s there? Carlos Rivera, who’s Ryan Dungey’s mechanic, but before that he was Davi’s mechanic from the time he was on 80s all the way up until 2011, so clearly they have a bond.

-You know who else is at KTM? Roger DeCoster, who was Suzuki’s manager when Millsaps came up as one of Suzuki’s hottest amateurs ever.

-It would be nice to see Davi actually race the KTM so we can see if it would’ve worked out.

-Even if Davi didn’t like the old KTM, this new one seems to be doing pretty well.

-Marvin Musquin is seriously the nicest guy in the history of the world and would probably become Davi’s best friend.

-Rivera is a known master of building the lightest bikes in the pits. Davi once lost forty pounds before a race season. Together they could work weight-loss magic to make The Biggest Loser look tame.

-Seriously, with all the teams Davi has been on you could play a six-degrees-of-separation game with him all day long.

-Davi’s Rockstar Energy team switched from Suzukis to KTM in 2014, and reportedly Millsaps hated the orange bike although he never ended up racing it.

-We don’t know if DeCoster loved his time with Millsaps—or even remembers it.

-The new KTM is smaller and lighter, which means Davi will look more huge than ever on the bike.

-Davi would want Rivera back, Dungey wouldn’t want to let him go, and there would be drama going on under the tent. You know Dungey and drama go hand in hand.

-Hey, he rode here once before—why not try again?

-In 2013, Millsaps rode for this team and had an amazing supercross year.

-His BFF Martin Davalos rides for this team, so I imagine both guys would be in great moods all the times.

-As we mentioned when he was here the last time, he didn’t like the KTM, but guess what? The team’s on Huskys!

-A Husky is basically the same bike as the KTM that Davi hated. There goes that theory.

-Dave Gowland, the manager when he was awesome on this team, is now gone.

-They just signed Christophe Pourcel, which is probably the only spot that was up for grabs.

-Pourcel and Millsaps under the same tent? Oh, boy.

-Know what? Just scrap this—there are a ton of reasons why this would never work

-Well, as we said before, he really did well on Suzukis a couple of years ago, and this team rides Suzukis.

-Kenny Roczen seems like the kind of guy that would get along with anyone, so no alpha-dog thing going on here.

-Davi’s got a lot of tattoos, and so does team owner Carey Hart, and actually, so does general manager Kenny Watson!

-The team’s other co-owner, Ricky Carmichael, is from Florida just like Davi! (Yeah, strong reason, I know.)

-Mark Johnson, the team manager, can just use Weston Peick’s 2014 suspension settings minus a couple of rates for Davi.

-Three words: too many tattoos…

-Oh, man, owner Mike Genova put #7 on an MCR bike in the pits in Seattle one time when JGR Yamaha was going through issues with James Stewart, so clearly he likes to make a splash. What better way to do that than to sign the #18?

- The MCR450 is really a Suzuki deep down inside, and we know Davi likes Suzukis.

-As a totally independent team, Davi could probably use whatever suspension company he wants and make himself really happy with it.

-He wouldn’t need any logos put on his gear.

-C’mon, who doesn’t want to see amateur rivals Mike Alessi and Davi Millsaps together on the same team?

-Well, Millsaps probably doesn’t really like Mike all that much, but for sure he doesn’t like Tony Alessi, Mike’s dad. And, seeing as how Tony is the team manager, we’re pretty sure that’s a solid reason why this wouldn’t work.

- Oh, no, wait. The team wants everyone to know the MCR450 is its own bike and not a Suzuki. So maybe Davi wouldn’t like it.

-When Big Dave Millsaps comes to the races, it’s probably going to get weird as Tony and Davi’s dad once got into a wrestling match at an amateur race back in the day.

-There are a ton of reasons this wouldn’t work, but wouldn’t this be the absolute best place for Davi to land?