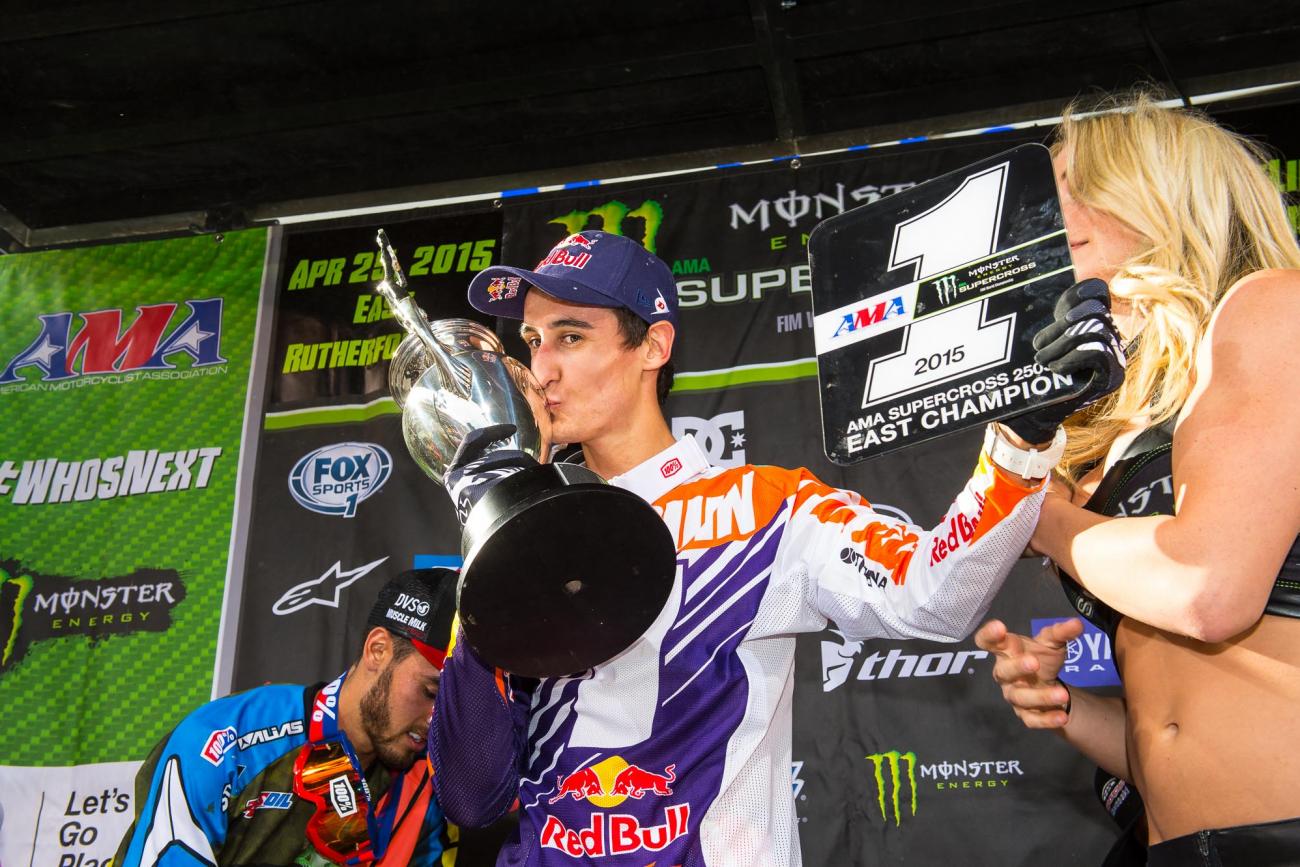 "I'll accept nothing less than wins at this point," said Eli Tomac in a GEICO Honda press release prior to penultimate round of Monster Energy Supercross in East Rutherford. Starts have, for the most part, keep Tomac grounded with just two wins in 2015. His speed has been there, but when you give Ryan Dungey a big advantage to play with off the start, it’s hard to make much headway. While his starts weren’t exactly on point today, they didn’t keep him from advancing either. He quickly moved into second, and began to cut into Seely’s four-second lead early in the main event. Tomac eventually worked to within a second and blitzed the whoops after the finish line to pass Seely. He would eventually stretch his lead to over twelve en route to his third win on the season.

Before we get into the rest of the race, kudos to Feld Motor Sports for tying something different this weekend. The series decided to move the race to 3 p.m. EST and got a prime slot on the Fox Network. Before the round, many thought the pit party would suffer from the early start, and we were dead wrong. The pits were crowded all day, the stands were packed for the beginning of the race and the action looked beautiful underneath crystal clear skies. Great job by all involved.

[Side-note: Let us know how the coverage looked on Fox and what you thought of the early start in the comments section.]

Back to the racing. Ryan Dungey was the same Ryan Dungey we’ve seen all season. A methodical rider, with the ability to know when to press and when to lay off. The rough and rutted track was not something you wanted to press on, especially when you already locked up the 450 Championship. Tomac was the better rider today, and Dungey seemed to know that about half-way through and decided to take second. Just think about this for a minute: Dungey has not been off the podium since Anaheim 1!!! Consistency has won this championship for the Dunge.

“The track was a little rough today and was hard to make passes in the main event,” stated Dungey. “All in all, it was a really great day of racing. I’m happy to be on the podium and looking forward to the final round in Las Vegas.”

Cole Seely was great again, riding to his fourth podium in six rounds. Seely has steadily progress in his rookie season and although he gave up the lead, he’s proven he’s a podium contender week in and week out.

Chad Reed was a late scratch due to what we hear was a shoulder injury. Reed didn’t ride the second practice and was a no show for the heat race. We’ll have more later this week on what his status is going forward.

Blake Baggett hasn’t been terrible lately, but he hasn’t been the same Blake Baggett we saw challenging for podiums early in the season. Baggett’s main goal this season was to make it through all 17 rounds healthy and learn during his first season. But, he’s been much, much better than expected and although he’s tailed off a bit, his season has to be considered a success. Well, Baggett was back in East Rutherford. He was locked in a tight battle with Andrew Short for fourth, but once he cleared the veteran he took off and opened a huge gap over Short and Broc Tickle. His fourth was his best finish since Daytona.

Speaking of Short, he continues to rip holeshot after holeshot. He grabbed the lead in both his heat and the main event, claiming his 1,700 straight holeshot. The veteran then locked into huge battles with Baggett, Justin Barcia, Broc Tickle among others. Short didn’t relent, holding off Tickle at the end for fifth. It was Short’s best finish since a fourth in Arlington. He hear that Short broke his kneecap in the main. We will update once we know more.

Weston Peick looked like he was struggling from a crash in his heat race in the main. After starting around third, Peick just didn’t have the speed and made some mistakes as he fell back to tenth.

Josh Grant was battling an illness and wasn’t even sure if he was going to ride tonight, but he soldiered through to a seventh. Another good ride for Grant, who has turned his season around.

Kyle Chisholm was inside the top ten for the first time all season, finishing eighth. Far and away the top privateer on the night. Shane McElrath made his 450 debut today and finished eleventh.

Marvin Musquin clinched the final title in the 2015 Monster Energy Supercross season today. He didn’t need to win, he held a pretty comfortable lead heading into the night, but a racer is a racer and Musquin wasn’t content with second. He tracked early leader Justin Bogle down late in the race and rode to his sixth win of eight. The championship is Musquin’s first on U.S. soil.

“It feels so amazing to get this title,” remarked Musquin. “To get the win at the final race makes it that much better. My bike was great today as it has been all season. I want to thank my team and my family for all of their help in allowing me to accomplish this goal.”

“We are very proud of both of our champions,” stated Roger De Coster Red Bull KTM team manager. “To claim both championships in the same season is a remarkable feat. We will celebrate these wins and continue to move forward toward our next goal in the outdoor series.”

The battle to watch tonight, err, today, was between young stars Joey Savatgy and Jeremy Martin. The two locked horns for a majority of the 250 main. Savatgy took Martin wide a couple time to protect the lead, even pushing him off the track once. With around two laps remaining, Martin dove hard into the whoops, and tried to make a pass in the final corner before losing the front end. He would remount to finish fourth. The podium is Savatgy’s third straight.