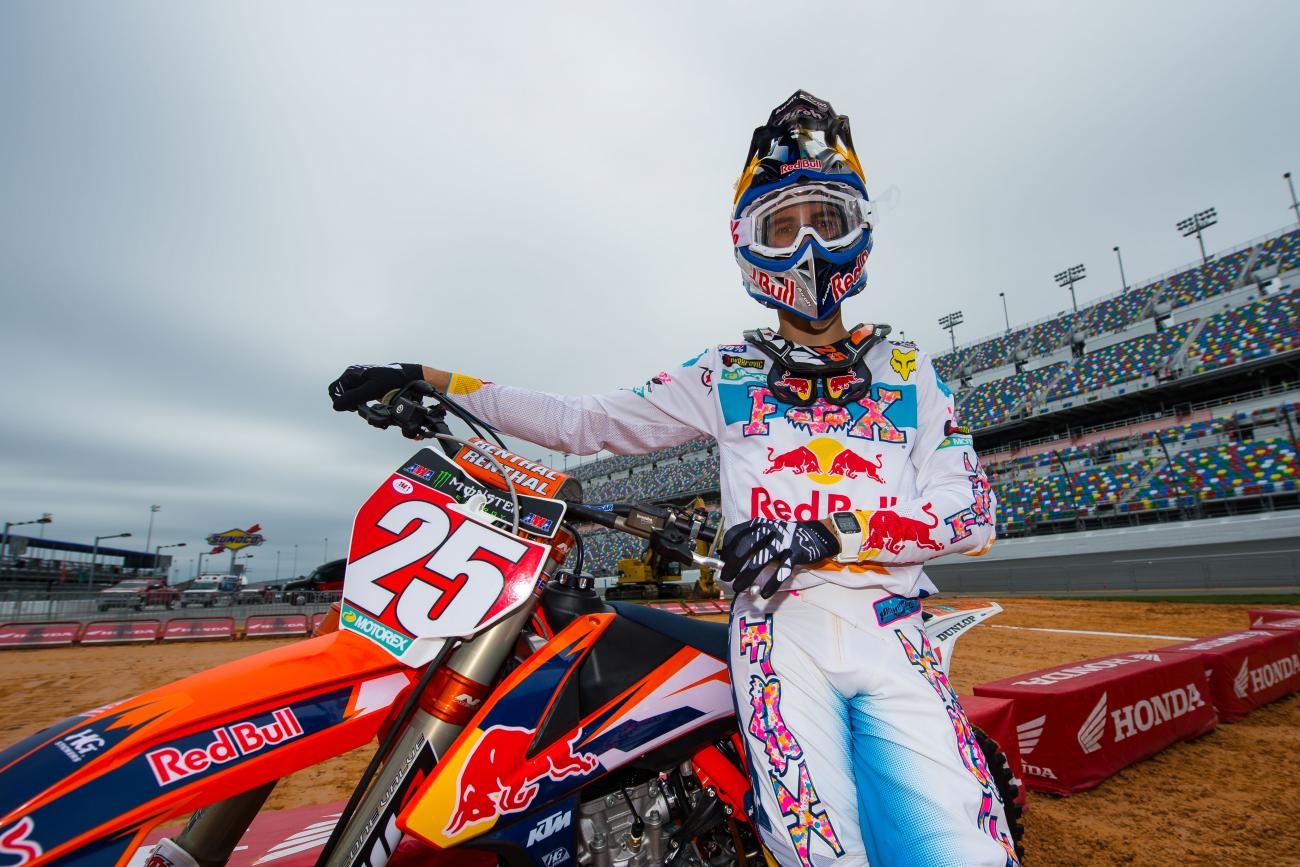 After the race last Saturday, Ryan Dungey said that after wrapping up the championship, his goal had been to beat his win total (six) from when he won the title in 2010, which he did by clicking off his seventh victory of the season in Santa Clara. He went on to say that his goal now is to see how many wins he can stack up before Lucas Oil Pro Motocross get underway. He can reach nine if he wins out this season, far and away his best season ever. Will anyone stand in his way? –Aaron Hansel

Other than Marvin Musquin, the only person who still has a shot at the East Region 250SX Championship is Justin Bogle, but with a 20-point deficit it’s a pretty big long shot for the GEICO Honda rider. "It's Supercross; anything can happen," said Bogle in a team press release. "I'm not the kind of person to wish bad on anyone. I just stay within what I can do and that 's try to win. I'm ready." If Bogle wins, all Musquin has to do is finish sixteenth or better to wrap it up. Seeing as how Musquin’s worst finish this year has been second place, that shouldn’t be a problem. Be ready for Musquin to deliver Red Bull KTM their second title of the year this weekend. –Hansel

Weston Peick has been on the gas all season despite missing four gate drops with injury, and after watching him put in work at or near the front, time and time again, it seemed like only a matter of time before he finally landed on the podium, which he did in Santa Clara. Now that he’s checked that box, we’ll see if he backs it up, or even betters that result, in New Jersey. –Hansel

This weekend’s supercross will be a daytime affair, with the evening program scheduled to kick off at 2:30 p.m. Will it affect the outcome of the race? Probably not, but it will be interesting to see how the local crowd responds to this experiment. It’ll be cool to see daytime competition inside a stadium too. If you’re Musquin, you’re especially pumped—with racing ending so early he’ll have a lot more time to celebrate his likely championship! –Hansel

Tie for fifth, that is. Right now, Anthony Rodriguez, RJ Hampshire, and Jimmy Decotis all have 84 points, and since this is the last points race of the year for them, it’ll be the final shot for each guy to finish the year out in the top five. There’s a big difference between fifth and seventh, so expect these guys to be going at it big time on Saturday. –Hansel

Although he spotted the field 25 points at Indianapolis, Jeremy Martin is still essentially a lock for third in points—his best-ever points finish in Monster Energy Supercross. Martin is 12 points clear of Joey Savatgy entering the weekend, meaning, if Savatgy wins, Martin would only have to finish eighth or better to secure third. With Cooper Webb and Aaron Plessinger finishing top-five out west, and A-Rod, as we mentioned above, and Martin with good chances at top-five in the East Region, to say Star Racing is have a remarkable year is an understatement. –Chase Stallo

Justin Barcia spent a lot of his amateur career at MTF in Georgia and now calls Florida home, but his roots are in the greater metropolitan area. Born in New Jersey, Bam Bam grew up in New York and is a crowd favorite in the area. He finished fourth here a year ago. Can he rebound from a tough outing at Santa Clara and claim his first podium of the season at home? –Stallo

There’s no love lost between Jason Anderson and Blake Baggett, which should make the last two rounds interesting. The rookie duo is currently sixth and seventh in points, respectively, with Baggett holding a 2-point advantage. Furthermore, they only trail the ideal Trey Canard by 14 and 16 points, which means fifth in points is very much still up for grabs. Most of the 450SX point battles are sewed up, so keep an eye out on this one this weekend. –Stallo

Since his return at Detroit, Justin Brayton has steadily improved week to week. He finished a season-high seventh in Santa Clara, and has three top-tens in four rounds since his return. It takes time to regain fitness after missing as much time as Brayton did, but it’s not too late for him to salvage something from what’s becoming a lost supercross season. Can he get closer to the top five this weekend? –Stallo

Chad Reed isn’t done winning races. He proved as much last Saturday, running inside the top three before a mistake in the rhythm section. If Reed were to win one of the last two rounds—East Rutherford and Las Vegas—he would become only the fourth rider in AMA Supercross history to win forty-five career 450SX Class races. Jeremy McGrath, James Stewart, and Ricky Carmichael are the other three. New York is a big stage where big names can shine. Will Reed make history this weekend? –Stallo