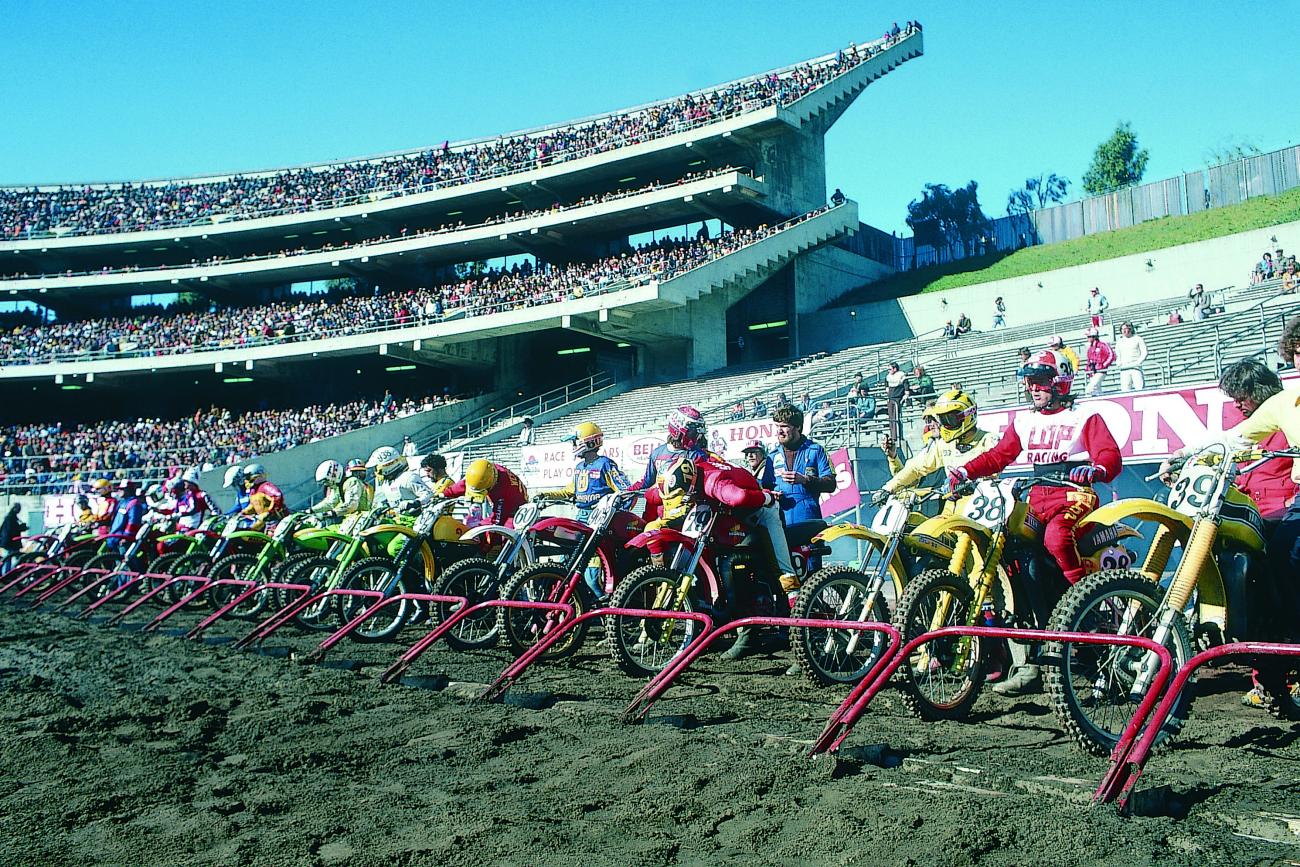 This weekend’s penultimate round of the 2015 Monster AMA Energy Supercross, an FIM World Championship, will begin at 3 p.m. (EST) for a rare afternoon event. That’s because the entire program will air live on Fox Network Television, a first for the event and the series. This is a big deal for the sport, so be sure to tune in! But it’s not the first time they’ve held SX rounds in broad daylight. For The List, we decided to look back at some of the past events that took place mid-day rather than under the lights.

DAYTONA: From its first races in 1971 to just a decade ago, all of the Daytona Supercross races took place during the afternoon, usually on much longer courses that what we see now. That’s because they got together with Musco Lighting and managed to light up the infield enough to move the race into the evening and make it more like most other rounds of the series.

TALLADEGA: Few might recall that Talladega Speedway also held AMA Supercross races for a brief time, like in 1984, when Team Kawasaki’s Jeff Ward won the race. And, like that other big superspeedway Daytona, it was held during the afternoon. Here are the complete results.

OKLAHOMA CITY: In 1991, on an extremely hot afternoon at the Oklahoma State Fairgrounds, Jeff Ward was again the winner of a day-time supercross, topping Jean-Michel Bayle for what would ultimately be the twentieth and final win of Wardy’s AMA Motorcycle Hall of Fame career.

LOS ANGELES: Arguably the most notorious of daytime SX races was held at the Los Angeles Coliseum in July 1992, five weeks after the next-to-last round of the series. The race had been postponed by a month due to the Rodney King riots in Los Angeles, which were ignited by a pedestrian’s video of the police beating and tasering King after a traffic stop. As whole blocks of south central Los Angeles burned, there was talk of canceling the race all together, but Yamaha’s Damon Bradshaw and Honda’s Jeff Stanton were locked in battle for the title, so the race was held on July 11. The area around the Coliseum was still considered very dangerous even a month later, so the promoters decided to hold the race in the afternoon. With mostly empty stands in the spacious Coliseum, Bradshaw had a painful-to-watch meltdown and simply couldn’t get moving while the tough-as-nails Stanton put his head down and banged out the win and the championship in stunning fashion.

PONTIAC: Back in the day some races were double-headers, often holding the follow-up race on Sunday afternoons. The Pontiac Silverdome in Michigan stands out for doing so because it had a white inflatable cloth roof, so the Sunday races had a weird movie-set feel to them, with natural light peeking through the roof and mixing with the stadium lights. Bob Hannah was the King of Pontiac, and he swept six straight races over three years (1977–’79) including three daytime races. The one in ’77 landed him on the cover of Motorcyclist magazine.

BOSTON, BUFFALO, WASHINGTON DC, PHILDELPHIA… Not sure what the exact reason was, but in 1983 and ’84 the promoters often held the East Coast rounds during the day, possibly concerned about the tough downtown settings of some of the old stadiums like JFK in Philly, the old Foxboro, and Buffalo. Or maybe it meant warmer weather? Anyway, the top guys on the era, like David Bailey, Johnny O’Mara, and of course Bob “Hurricane” Hannah often did their battling in broad daylight, albeit with lighter crowds than what we see now.

LOS ANGELES: In 1980 the Los Angeles Coliseum became a two-day doubleheader with the first race on Saturday night and the second one (with the track running the opposite direction, if memory serves correctly) held on Sunday afternoon. Broc Glover was the winner, followed by Honda’s Jim Gibson and Chuck Sun.

PASADENA 1999: While it wasn’t an AMA Supercross race, but rather an FIM World Supercross race back when the Europeans were trying to get a global stadium series going, the Rose Bowl in Pasadena, California, was chosen as site of the American round in November. Unfortunately, the city has strict noise ordinances and the races pretty much had to be done by dark. The winner was Honda’s Ezra Lusk, in front of a crowd of maybe eight thousand. Neither series ever returned to the Rose Bowl.