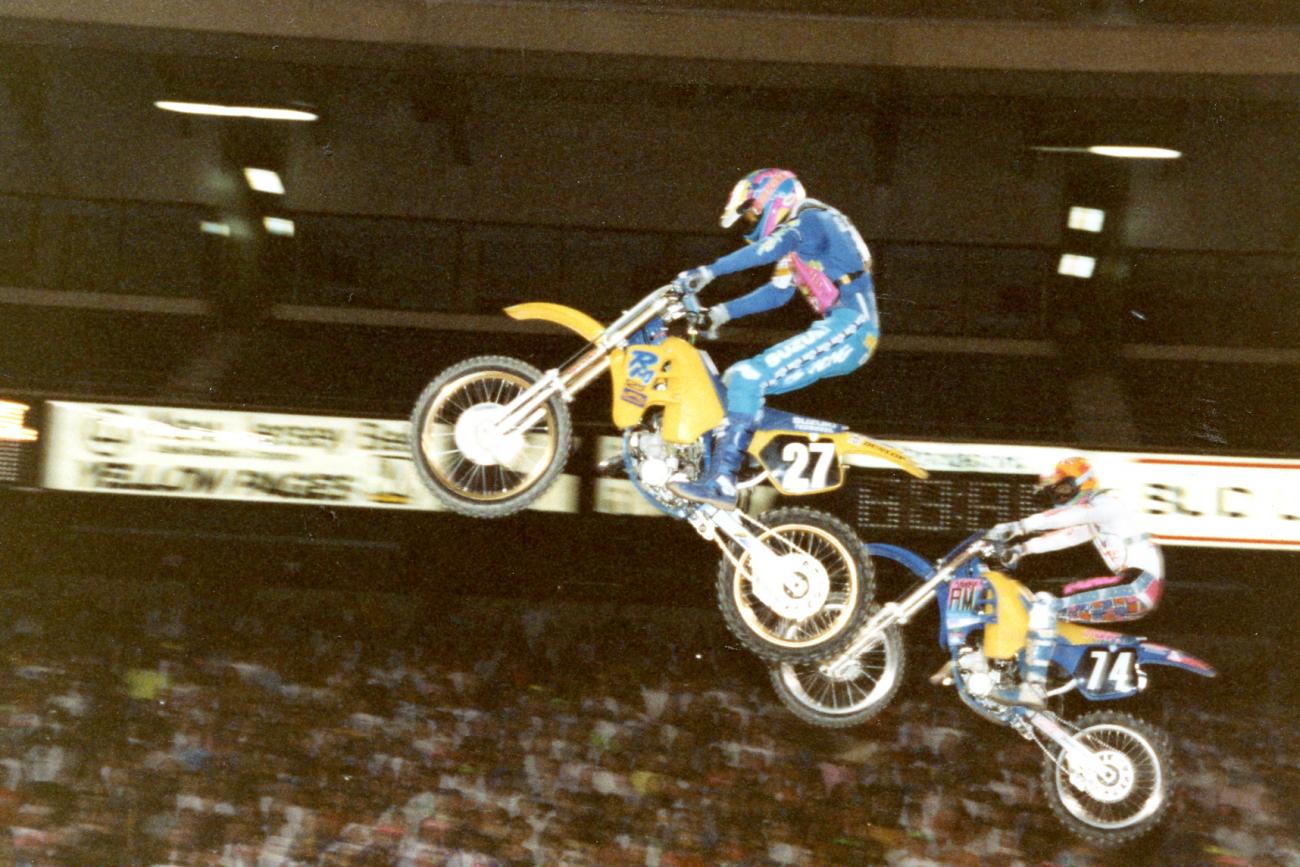 Last week, Andy Bowyer’s Rev Up was put to bed after a twelve-year run on this site. Andy’s moved on to bigger and better things with Feld, the folks behind Monster Energy Supercross, but we still plan to bring you a fresh vibe every Thursday here at Racer X Online. We’ve got a bunch of ideas under our new “Revolver” tag, but we’re letting 1990 125 East Supercross Champion Denny Stephenson get the most cracks at it. There’s no one—no one—in this industry quite like Denny. Here we go with either the best or worst idea we’ve ever had.

Recently, my long-time friend Andy Bowyer took a new job with Feld Entertainment as their moto media guy. So, with his new job came his final Rev Up last Thursday. I decided to drop Weege a text and suggest maybe I could take over the reigns. He responded that it was definitely a possibility. I followed that up with a text to Andy to get his blessing. He was all for it, but everyone wanted to make sure I gave it a new name, as Rev Up is Andy’s and that made complete sense. So, here we are—welcome to my first and hopefully not last Crashed n Burned.

I figure the name fits most of my injury-riddled racing career. I even made the cover of the one-time infamous Crash n Burn magazine with a Thom Veety classic. I like to refer to it as the herpes of moto photos because it doesn’t go away and comes across my social media timelines at least once a month. And, what makes it even more appropriate is it’s from the Kawasaki Race of Champions in Englishtown, New Jersey. This weekend’s supercross is being held at the Meadowlands, aka MetLife Stadium, in East Rutherford, New Jersey. See how I tied that in there? This is a new stadium, but it’s built on the same land as the old one.

Back in 1988 I had one of my most memorable weekends at the Meadowlands. My dad and I decided I could race and try to qualify for both classes. Back then there were the 125 and the 250 classes, and the Meadowlands was my last East Coast supercross of the season. It was my rookie season, and Mike Jones and Todd DeHoop were locked in a fierce points battle for the East title. I pretty much had a lock on fifth in the points, so I decided to give the two-class thing a shot.

The biggest thing I remember was how long of a night it was. I raced every 250 race right down to the LCQ to try and get into that main. I got the final spot through that LCQ and pretty much stepped off my KX250 and walked to the start for the 125 main. And I’ll never forget lining up between Jonesy and DeHoop. There was so much tension between the two due to the slim points margin. I couldn't get either one of them to talk, so I just yelled at the top of my lungs and turned at each laughing and said, "Tension breaker, boys." And off we raced.

I ended up getting third that night behind Mike LaRocco and DeHoop, who locked up the title, while Jones struggled with a bad start and ended up seventh. By this point in the night, I was pretty much exhausted and spent. I did my podium interview with the legendary Larry Maiers, stepped down, and walked back to the start for another twenty laps. Needless to say, I had last gate pick on the far outside. I’m pretty sure I was next to Fred Andrews, who said, "Twenty more, huh, bud?" It’s funny the little things you remember twenty-seven years later. I lasted maybe 2–3 laps, but I didn't pull off. Luckily I got lapped a couple times, so I actually only had to go eighteen laps.

One thing that was cool about racing at the Meadowlands was its proximity to New York City. A small group of us took a limo into the city the night after the races. And, whether you like the city or not, NYC is one helluva spectacle for a 17- or 18-year-old kid from Nebraska. We headed to the Hard Rock like every tourist and picked up a t-shirt. And then we had the limo driver take us to see the scantily clad ladies of the evening who used to walk the streets back in the late 1980s. Let’s just say a certain legend from the East got his bag of tees stolen and took a heel to his head one of the years. But, we won’t name any names. Scandalous!

One of the amazing things this Saturday is live coverage on network television on FOX. Man, have the days changed, and as many of you, I love my Saturday nights at home watching the races. Add Twitter in and it’s like I’m sitting with a hundred other folks. One thing most people didn't know was back in 1990, if you had a satellite, you could catch a live feed of the supercrosses. I’m not positive why it was, but I recall something about Japan getting it. (Don't quote me on that.) So, my mom and friends would make their way to one of the local sports bars—DJ’s Dugout—and they would turn it on for them to watch. It didn't have any announcers, but they got to follow my journey for the title, and I got to name-drop them on the podium a couple times. That bar is still open to this day, and just moved across the street into a new location.

It’s a disappointment the titles are all locked up, but I’m looking forward to some more excitement. The races have been pretty exciting this season, and hopefully this weekend is another good one—but Bowyer was the master of the weekend pump up, so I’m just going to give you the old-school Jersey tales and keep this short. However, before I go I want to express how bummed I am for RV2. I just read last night that he broke his tailbone in four spots in Italy. That was one crazy loop-out, and he definitely landed ass first.

Now, it’s hard to guess what’s next for him, but I give him the utmost respect for going over there and giving us fans some GP excitement. I’ve never broken my tailbone, but I can’t imagine it being easy to race in that condition. I remember Jeff Ward breaking his tailbone back in the day, and him telling Chicken and I he was happy the doctor didn't have fat fingers. Ha! Hopefully we haven't seen the last of Villopoto.

That’s it, folks. Have great weekend, and if you’re taking a limo into the city, hide your Hard Rock tees and duck.