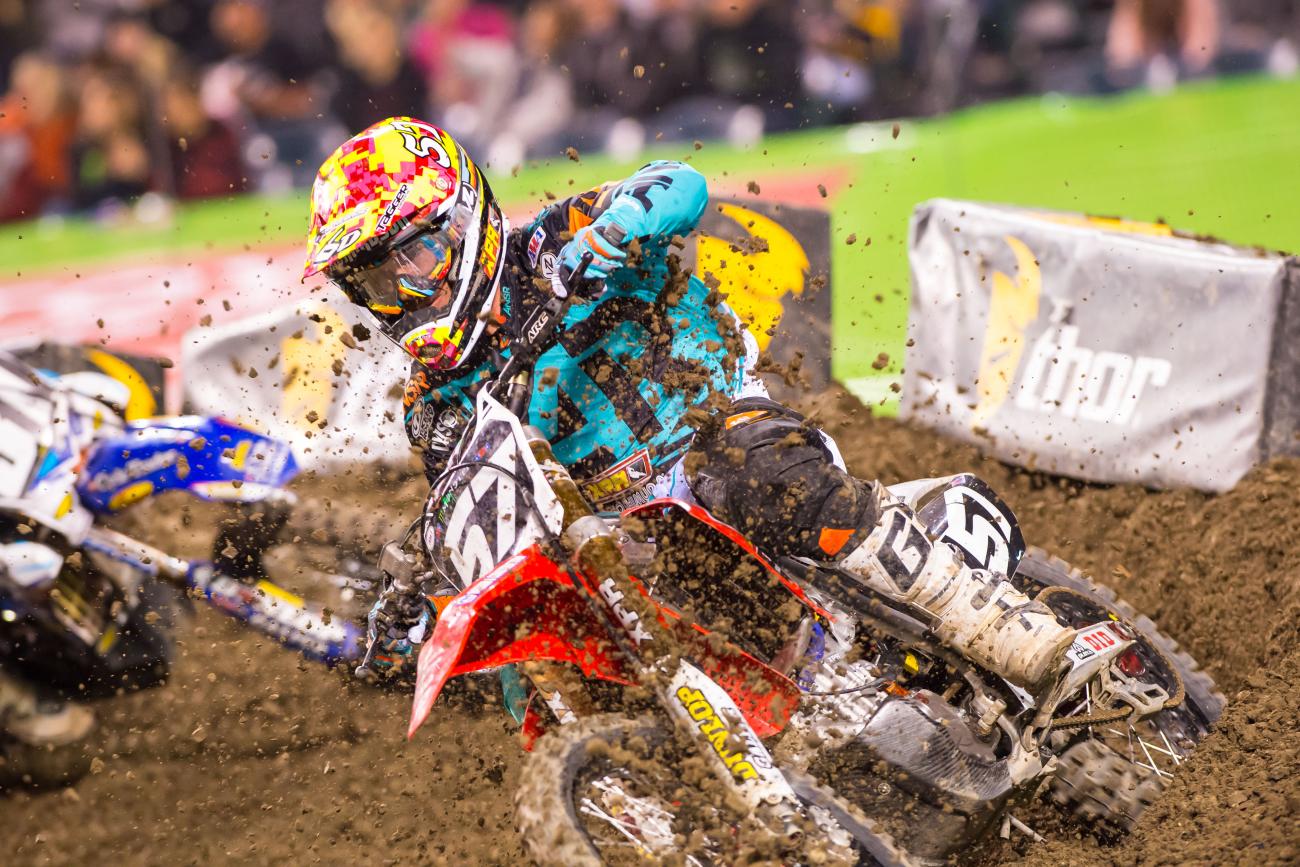 The Australian pipeline to America that was once so flush has dried up over the years. The Moss brothers—Jake and Matt—have returned to Australia. Michael Byrne retired. Brett Metcalfe is back in Canada for the summer. And Dean Ferris has gone back to the FIM World Motocross Championship after a brief stint with KTM in 2014. Australia’s hopes may now lie on the shoulders of 20-year-old Jackson Richardson.

Richardson was born in Cairns, a regional city on the far north coast of Queensland, hundreds of miles from the metropolitan cities of Melbourne and Sydney. He grew up riding on a cane farm his father Peter, who also runs a construction company and hauling business, bought when Jackson was around 10. Unlike the Chad Reeds and Brett Metcalfes of the Australian racing scene, Richardson didn’t race much back home. “The closest Australian National is about eighteen hours away,” he said. “We’re over here because it would cost us the same amount to get there as it does to get here, and the competition and tracks are better.”

At just 13, Richardson and his father made the nearly ten-thousand-mile journey here to compete at Loretta Lynn's. Richardson says it was an overwhelming experience. “It was crazy. Even during my regionals, it was just nuts,” he says. “The competition was so intense! Also, there really aren’t a lot of places to go riding in Australia anymore. Unless you have a private track there is no real chance of riding during the week. A lot of tracks have shut down over the years due to the council shutting them down. It’s pretty crazy.”

Richardson’s journey is unique in the Australian pipeline. Chad Reed and Brett Metcalfe were already established stars in Australia before making the decision to race GPs. As were the Moss brothers, who bypassed the GP experience for rides in America. Even more recent transplants, Todd Waters and Dean Ferris, were established before heading to Europe. Alex Gobert, editor-and-chief of MotoOnline.com.au told us that the transition to the GPs is much tougher than the adjustment to America for Australians.

“The adjustment for an Australian to the US is pretty straightforward, because of the similarities in lifestyle and also because as kids, all of our riders follow the competition over there so closely,” he says. “They know the majority of stadiums and the history within, they understand the nature of the outdoor tracks on the calendar and they obviously have a great knowledge of the American riders from watching them on TV or even online these days. And just like over there, Aussies have to be good at both supercross and outdoors.

“Chad Reed and Brett Metcalfe went to the US via Europe—an extremely difficult transition, a long, long way from Australia—and that seemed to make their arrival in the US even smoother again because once they got there, it was almost comparable to going 'home' for them compared to Europe,” he added.

The major difference with Richardson and Taylor Potter, who is contesting the 250SX East Region, is that neither was a star in Australia before coming over. “With Richardson and Taylor Potter, compared to Reed and those more well-known guys, is that they never actually won or even had factory rides at the pro level in Australia before embarking on an international career,” Gobert says. “These guys are packing their bags early, putting it all on the line and essentially chasing the dream in America rather than making their mark in Australia first. That's not an easy option whatsoever, but it seems to be paying off now, especially for Richardson.”

“It was pretty hard when I first came,” Richardson says of moving to California, where he’s based when racing. “I came from a small town, and when I got here it was an eye-opener. You have the big freeways and big cities. I just wasn’t used to that at all. Over the years, though, it’s become much easier—it’s almost a home away from home.”

In today’s racing world, the waters of who is and isn’t privateer has gotten murky. Smaller teams have seen a rise over the years, especially amongst the Yamaha brand. While these teams may not be flush with factory support, they typically have a semi and pay the expenses of their rider(s). In the case of Richardson, it’s pretty straightforward—he’s as close to privateer as it gets. Richardson and his mechanic, engine builder, and suspension guy (yes, he has one guy for all three) Chad Braun of XPR, and either his mom or dad—they split time between here and Australia—drive from race to race in a van.

Although Jackson and his family have made it work since he turned pro in the US in 2012, he knows he can’t continue on the privateer path forever. “I know I can’t keep doing it like this forever, but I’m hopeful I can land a ride soon,” he says.

After injuries relegated him to just five races in 2012—one supercross and four outdoor nationals—Richardson began to make his mark in a depleted 250SX East Region in 2013. He garnered one top-ten that year, and two the following, also in the East Region, before jumping to a much deeper 250SX West Region in 2015. Success hasn’t come as easy against a field that featured thirteen factory-supported riders. For the most part, though, Richardson has more than held his own, averaging a twelfth-place finish in seven rounds made.

“I was hoping for a better season,” he says. “I was hoping for more top-tens, but the field was really competitive and to get a top-ten in that class was pretty hard to do. I’m glad a got one before the end of the season.”

After two straight Lucas Oil Pro Motocross campaigns that were cut short due to visa issues, Richardson will race a full schedule this year, traveling to each race in his van. “I may not be factory, but I think we have a really good program.”

While he certainly won’t be the last Australian to come to America, Richardson’s path is one only a few have ventured to make. Although it may have been bumpy at first, Richardson, with the help of his mechanic and parents, he has made it work. The question now: how far can he take it?