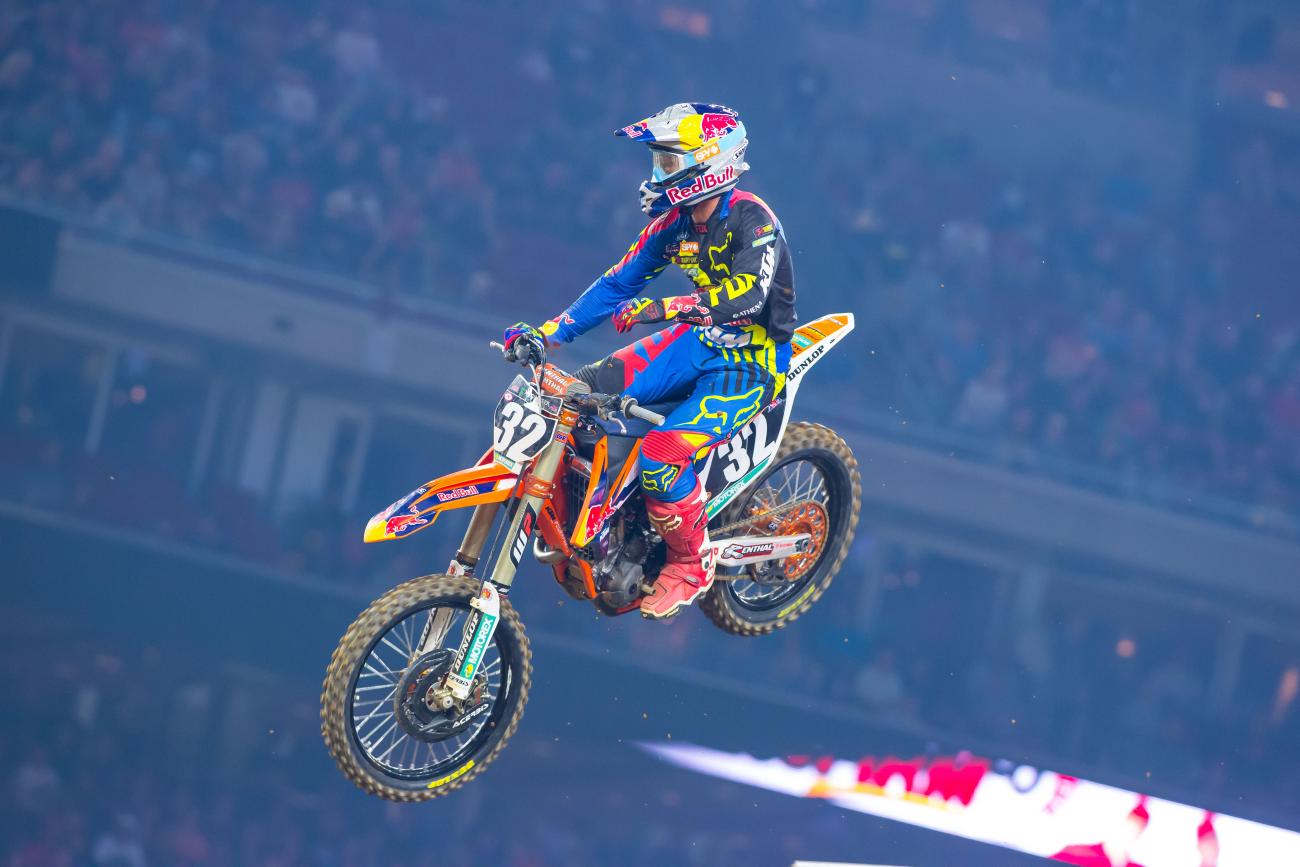 Santa Clara makes its debut in the new Levi’s Stadium, home to the San Francisco 49ers. New venues are always nice, and at this point in the season, any change of pace is extremely welcome. New venues always have upgraded amenities, making for a pleasant viewing experience. The weather is looking to be fantastic, so the inaugural event should be a huge success.

Looking at the track map, rhythm sections abound. There are more rhythm sections on this track than I can remember at any other round this season. The whoops look to be a non-factor on the track map, but anything could change once the dozers hit the dirt. The riders will once again use one rhythm section in both directions, again only for a lap. It seemed to work last week and there were no mishaps, so why not, right? The tabletop section on the back straight could be tricky. Skipping across them will be quickest, but might be tough depending on how they are built. Lastly, the start straight is very long, so look for another Andrew Short holeshot, as he will have the advantage of not shifting to third gear. When they shift, there’s a split-second delay and he will gain ground.

Cole Seely won his first-ever 450 main event last weekend in Texas. He’s been flirting with a win lately, winning heat races and finishing second a month ago in Indianapolis. His speed has been there, but he hasn’t put himself in the ideal spot when opportunity knocked. That all changed last Saturday, as he went to the front immediately and dropped the hammer on everyone. Impressive stuff.

Ryan Dungey wrapped up his second 450SX title with three races to go. To say he didn’t dominate this series would be unfair and flat wrong. He’s been in control for a couple of months now, and once Trey Canard went out with injury, the floodgates flew open. I honestly don’t know who would have won if Ryan Villopoto had shown up this year. Those are strong words, and I wouldn’t have said that in previous years.

Josh Grant has been improving, if quietly, all season. The beginning of the season was a catastrophe, as JG just couldn’t stay off of the ground. He figured out that issue and then slowly started climbing up the results sheet. In recent weeks, he’s been pushing into the top five, and has gone 6-4 in the last two rounds. This all bodes well as we move into Josh’s strong suit—outdoors.

Cooper Webb is a man on a mission this year. He won the West Region convincingly with a round to spare and was impressive to say the least. He improved greatly in his sophomore season and will be a serious threat once we move outside. Great series from the youngster.

Tyler Bowers came into Houston as one of the only riders with a shot to stop the Webb choo-choo train. Unfortunately, his back has been causing him major issues, and he had to pull out of the Houston main event. He announced this week that he will have surgery and miss the remainder of the 2015 season. Get well soon, Tyler.

Justin Hill had a disappointing 2015 season. Many, including myself, had him as the favorite for this title. It just hasn’t panned out as crashes and bad starts have relegated him to finishes that no one saw coming. He has two races left to grab a win.

Jason Anderson had a rough night. He made contact with just about everyone that showed up with a motorcycle. He was fast and should have had a podium finish, but foolish decisions kept him far from that result. He’s young, he will learn.

Ryan Dungey gets back to his winning ways now that the championship pressure is off.

Cooper Webb makes it six wins for 2015. Adam Cianciarulo buys his seventh flat screen TV of the year on Sunday.

Jason Anderson takes out all twenty-one of the other riders.

Tyler Bowers leaks info on his back injury. It seems he was injured in a faux WWE match involving Jason Weigandt.

Being in the new 49ers Stadium, located in Silicon Valley, all of the big tech firms come to supercross. Google brings many of their best and brightest minds to tour the pits. One unlucky Googler decided to take his happy-go-lucky outlook into Weston Peick’s personal space. The resulting smack down caused the Google group to scurry wildly and surely did irreparable damage to the binary folk. Weston was quoted afterwards: “Keep those nerds out of my face.” Thanks, Weston.