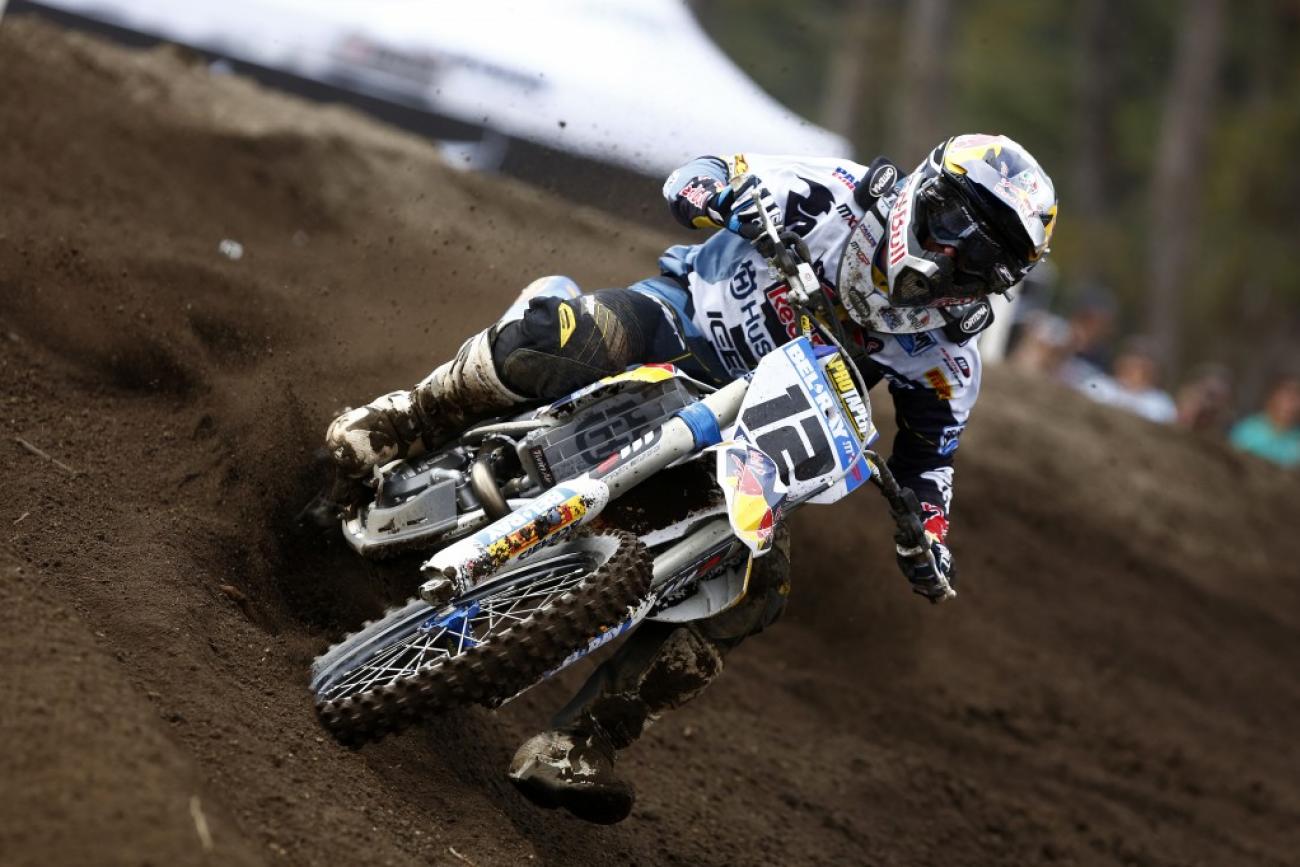 The crowd and the facility were two of the outstanding factors that contributed to a worthwhile showcase for Grand Prix motocross in what was the series’ first trip back to Argentina in two decades. A journey of more than 8,000 miles from Europe to the depths of Patagonia and the touristy Neuquen region was, in the end, regarded as a pretty good value considering the thirst for MXGP in this area of the globe, as well as the level of support from the region and Villa La Angostura region to make it all happen. Fans left precious little space around the new wide and flowing circuit as they flocked from across the bike-mad country and traversed the border from the equally fanatical Chile. The volcanic soil gave the layout a dark, sandy appearance, but the top surface was rough and deceptive and barely hid a solid base that caught many in terms of traction. The staffs from Pirelli, Dunlop, and co. were particularly busy on Saturday throughout practice and qualification.

With cheers in their ears, bikes bucking where they maybe didn't expect, and the chilliest racing conditions yet in this third outing of eighteen in 2015 (what a contrast to Thailand), the MXGP and MX2 motos produced some decent racing and a few unexpected incidents to ensure the sport’s reinvigorated fan base left the circuit pretty satisfied.

Red Bull IceOne Husqvarna Racing’s Max Nagl is the first to double-up this year. The winner in Qatar looked anything but in a fairly mediocre Saturday, but it says a lot for the German’s positive feeling with the FC450 and in the confines of Kimi Raikkonen’s team that he was a different rider on Sunday. Nagl ghosted Monster Energy Kawasaki Racing Team’s Ryan Villopoto for third position in the first moto and later gave the same treatment to Red Bull KTM’s Tony Cairoli and Rockstar Suzuki’s Clement Desalle in the second.

“The weekend was a big challenge for me because I was struggling a lot with the track yesterday,” he admitted. “I was off the pace and could not go faster. In the qualification race I tried to follow Tony [Cairoli] and Ryan Villopoto to watch their lines and where they go; that helped quite a lot actually. We changed the set-up of bike, and WP have done such a great job again with the suspension.”

Nagl can be considered a true championship threat at this early stage after two wins in three rounds, and it only depends on the former runner-up’s notoriously fickle health to see how long he can remain so. Luck was definitely on his side at Neuquen as he even stalled the Husky in the gate for the start of the second moto with the five-second board hoisted and was able to reignite thanks to the FC’s electric start, and fire the bike around the first corner in the top three.

Earlier in the day it looked as though the GP was Clement Desalle’s to lose. Fastest in timed practice on Saturday and faultless in the first moto, the Belgian was revelling in the terrain that had others like Jeremy Van Horebeek, Ken De Dycker, and Gautier Paulin scratching their heads. Paulin in particular seemed to be quite far off his A-game, and there is obviously an issue to resolve in the HRC camp. Back to Desalle, though. The Suzuki man weathered pressure from Cairoli in the first moto to record his first moto win of the year. He was slightly assisted by a spectacular “superman” from the world champion on the last lap while pushing hard for the lead. Cairoli admitted afterwards that he couldn't quite manage a seat grab and freestyle was not for him. As seen on so many occasions the Sicilian responded to adversity by unveiling a stronger performance in the second moto. He was better than Desalle (who keeps the red plate by 10 points) but had no answer to Nagl. There was a moment when he was battling with Villopoto in a re-run of a sumptuous little duel from Saturday’s qualification heat (Cairoli won pole position and admitted his asthma was causing problems at such altitude) but RV had nothing for the KTM racer.

Ryan Villopoto was undoubtedly a star draw. Cairoli was plagued by publicity, but Villopoto was virtually mobbed wherever he went and his actions on the track drew the loudest cries from the public mass on the banking. Ryan, accompanied by Casey Stoner for the large part of the weekend, was clearly missing effective starts, and his work with the team and the Showa technicians still seems to be on-going.

“Not exactly what we wanted but was able to improve in the second moto and get up there with those guys,” he said. “We still need to find a little bit more. Definitely need to improve on our starts.

“It was tough. I was able to salvage and get up in striking distance of those guys. Max, Tony, and Desalle were riding really well, and to get through all of them would have been really hard,” he continued. “If I had been riding better and with a little bit more speed then I would have been able to make more happen but it wasn't there today. I would like to stop saying this, but I am still getting this whole thing figured out. I think I have most of it apart from going up to the line without the mechanic, packing the gate and rolling in. I’m trying to get it under control.”

Fourth overall in MX2 and fellow American, Monster Energy Kawasaki racer Thomas Covington is making real strides in just his second pro season in the ranks of the 250s. The teenager seemed skinnier than usual in Argentina and this illusion was probably helped by the knowledge that a stomach virus had depleted his energy and seriously affected his diet over the previous fortnight. Despite the handicap TC started brightly and rode consistently—unable to put up much resistance when zapped by the likes of teammate Dylan Ferrandis or HRC’s Tim Gajser—for yet another personal best finish in GP.

“Not a bad weekend overall but I’m not really happy with my riding,” he offered. “I’ve had stomach problems for two weeks now and something is all-messed up. I was lacking a bit of energy over those rollers. I was throwing up on the plane here and could only eat properly for the first time yesterday. I will go back and do some more work and hopefully make it to that podium soon.

“The track was awesome and the best one so far, a lot of different line choice and easy to pass. I really like this place,” he added.

MX2, almost unbelievably after Red Bull KTM’s Jeffrey Herlings had owned every qualification heat and moto of the year so far, was taken by Ferrandis. The Frenchman capitalised on the shocking moment of the opening race when rookie Pauls Jonass inadvertently punted teammate off his bike mid-air. The former World Champion hurt his left ankle and the 250SX-F was wrecked and his race was over. Ferrandis, with his skill and strength over the bumps, outpaced the sturdy Jonass (now two podium finishes in a row) for the checkered flag. In the second moto he almost threw away the win. Herlings had resumed normal business at the front and Ferrandis fell out of third and gave himself a moto full of work to re-catch Jonass again and reach second spot.

“In my head I couldn't believe it,” Ferrandis admitted. “I had lost so many GPs like that when it had been possible to win. For sure I had that on my mind but I was feeling good on the bike and pushed really hard.”

Just the sixth different MX2 GP winner over the last two two years, Ferrandis was also encouraged that he is tied in points with Herlings in the championship standings. The Dutchman is the fastest in the class and one of the quickest in the FIM series, but he isn’t infallible and didn't seem too bothered by the loss of another chance to have a go at the perfect season. Rockstar Suzuki’s Jeremy Seewer made his first visit to the podium with a third, and became the third Swiss rider to make the top three in the last year. Watch out for the trio of Seewer, Valentin Guillod, and Arnaud Tonus at the Motocross of Nations.

Seewer only finished his studies last summer, and 2015 is his first term as a full-time pro and second in GPs.

Bad luck befell the likes of Max Anstie (hit the gate after taking a third in the first moto), Julien Lieber (a heavy crash on the Standing Construct Yamaha after a moto 1 fourth-place), Valentin Gulliod (second moto electrical problem), and Tim Gajser (had the speed but not the starts).

Back in MXGP, Tyla Rattray was barely getting through the motos after a virus had left him bedridden and unable to train following Thailand, while Yamaha Factory’s Romain Febvre was angry with two crashes in the first moto that dropped the MXGP rookie to eighth place. Teammate Van Horebeek crashed in that same outing and tweaked his left thumb. He took a fifth in the second race, but MXGP followers have yet to see the same kind of form that the produced last year as a runner-up. Hitachi Construction Machinery Revo KTM’s Shaun Simpson clinched a first-moto holeshot on the privateer KTM but fell outside the top ten after a fall. In the second race a knock with Rockstar Suzuki’s Glenn Coldenhoff ripped his rear brake hose free and ploughed straight into HRC’s Evgeny Bobryshev in the following corner. A shame as the Russian had been on decent form through the weekend.

After rounds in Qatar, Thailand, and now Patagonia, a return to Europe is due for MXGP. Everyone will attempt to squeeze into Arco di Trento in northern Italy in three weeks time, where the slippery, compact hard-pack will be a very idiosyncratic taste of European motocross for RV.