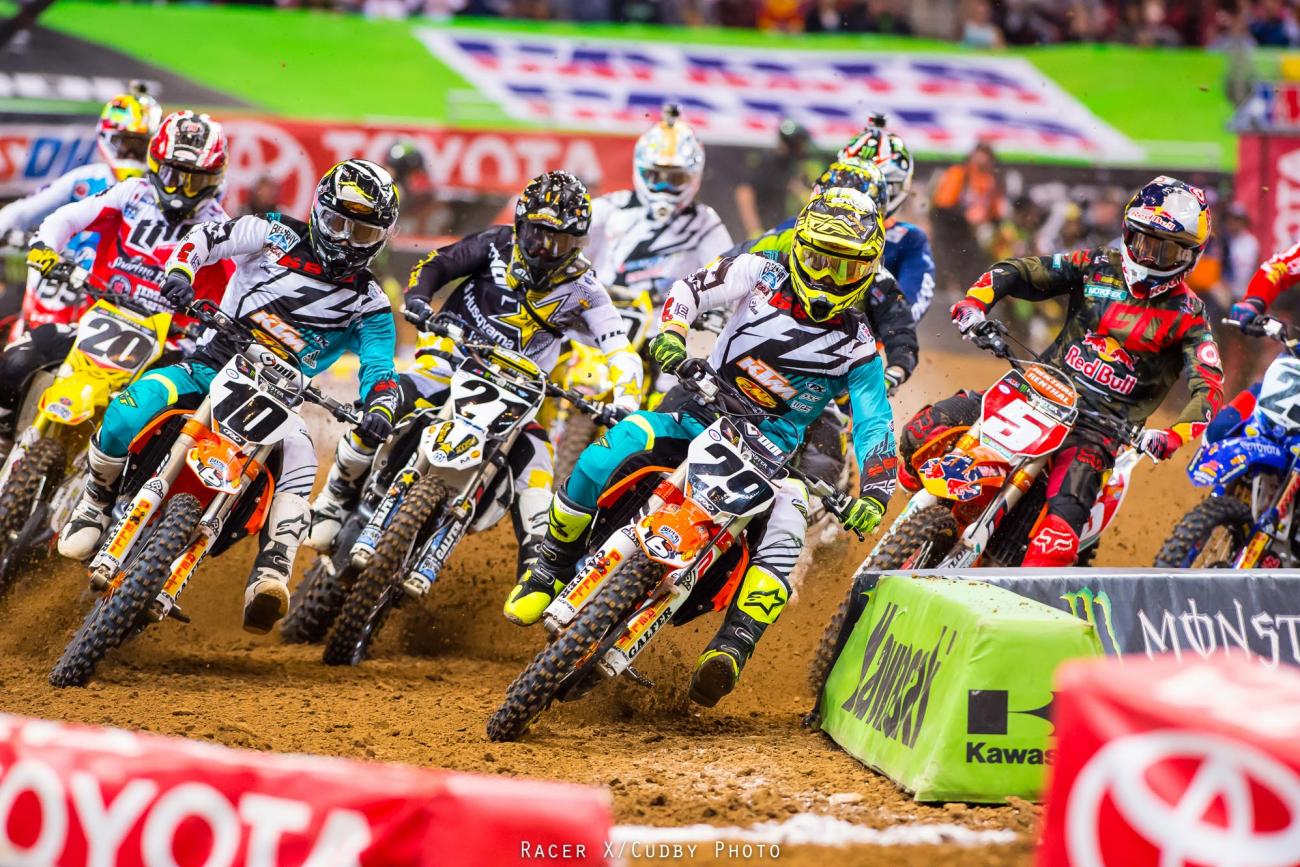 Dungey was untouchable on this night. It looked to be Eli Tomac’s day early in practice as he logged the fastest times, but Dungey showed up sharper for the final session and ended up with the fastest overall qualifying time. Once he gated well in the main, you knew it was over, and he basically didn’t put a wheel wrong for the twenty laps. That’s six main event wins for Dungey this year.

Short’s night ended quickly after that holeshot, as he went flying sideways off the face of a jump, went off the track, and bashed his bike up too much to continue. Andrew was okay. He told us he wasn’t sure what happened, we suspect it might have been a bike problem that sent him down in the first place, and then ended his race.

With Dungey long gone, the best action was a four-ride battle that materialized between Weston Peick, on the Autotrader.com/Toyota JGR Yamaha, Anderson, on the Rockstar Energy Racing Husqvarna, and Honda men Eli Tomac (GEICO Honda) and Cole Seely (Honda HRC). Peick was second for awhile after Short crashed out, Anderson made the move on him. Then Tomac came rumbling through after a so-so start, he ended up passing Anderson, then missing a triple, and Anderson got him back. Took Tomac a few laps to regroup but he came back after Anderson and got him for second.

Tomac had an ace up his sleeve with a big quad jump he had tried in practice, then revived for the main. It made the difference as he jumped past Anderson and Peick—not unlike the way he got Dungey for the lead last week in Detroit. This time he started too far back to even have a shot at Dungey. "I was trying as hard as I could," Tomac said in a GEICO Honda PR. "I had a good battle with Jason there for quite a few laps. I should have made a pass on him earlier, and that kind of blew it for me. That shuffled me back probably five seconds or so. That was make or break to have a sniff at the win."

Anderson’s podium was big, since he hadn’t been there since his sensational second place at the opener in Anaheim (behind Ken Roczen. Does that race seem like it was 100 years ago now?). It also came on the heels of his two worst races of the year. “I feel like I could have done this at some of the other races if I just got a start like this,” he said.

Peick ran second early but once again didn’t have twenty laps in him. Been a pretty rough year on Peick, injury wise, and he took two more big crashes in practice. One Anderson got him for second, the bottom dropped out and Tomac and Seely quickly went by. He hung tough for fifth, his fourth top five of the season.

Josh Grant keeps getting better on the Discount Tire/TwoTwo Motorsports Kawasaki. He even beat the boss this weekend with a sixth. Grant gated pretty well in the main event for the first time this year and rode solid and steady for the spot. He wasn’t as fast as the Tomac/Anderson/Seely/Peick group, or Dungey, but he was best of the rest.

Bad starts for Chad Reed and Blake Baggett, they came through the pack together until about the halfway mark. Baggett, who was really sick, seemed to fade a bit and took tenth. Reed kept charging and was able to get Soaring Eagle/Jimmy John’s RCH Suzuki’s Broc Tickle for eighth. Earlier in the race, Tickle was seventh, but Monster Energy Kawasaki’s Davi Millsaps was able to get him for that spot, then Reed went by to push him to ninth.

Musquin is just the class of the 250 field, no doubt whatsoever. This time he had a real challenge from Yamalube/Star Yamaha’s Jeremy Martin, who grabbed the holeshot. Then Martin and Musquin scrapped it out on the first lap until Musquin finally secured the lead and pulled away. With a 20-point lead in the standings and one round to go, this title is nearly a lock for the Marv Attack.

Martin rode good, but simply wasn’t as fast as the Moose-Can, so he finished second. Martin says he made big changes to his starting technique after working with Ricky Carmichael and his practice bike mechanic this week, and it worked by pulling the holeshot.

Joey Savatgy needed one of those starts. He rode well but started a few spots back, and Musquin and Martin were long gone by the time he was third. He held on to take a podium for Monster Energy/Pro Circuit Kawasaki.

Justin Bogle’s podium streak is over, but he took fourth. Simply put: a bad start. That was it. Bogle was bummed to lose more points to Musquin and said the bad start was on him—he almost went early, had to pull back, and the pack took off.

Bogle’s GEICO Honda teammates had rough ones. RJ Hampshire crashed hard in practice, ending his night early. Jordon Smith crashed in a pileup in the main, he came back for 13th.

Star’s Anthony Rodriguez is getting the consistency thing down. He finished fifth for the second week in a row. A-Rod told us he feels like this year is more like his rookie year should have been, he was injured coming into last year and was never quite ready. Now he’s learning the tracks and learning to keep it on two wheels, and things are improving rapidly.