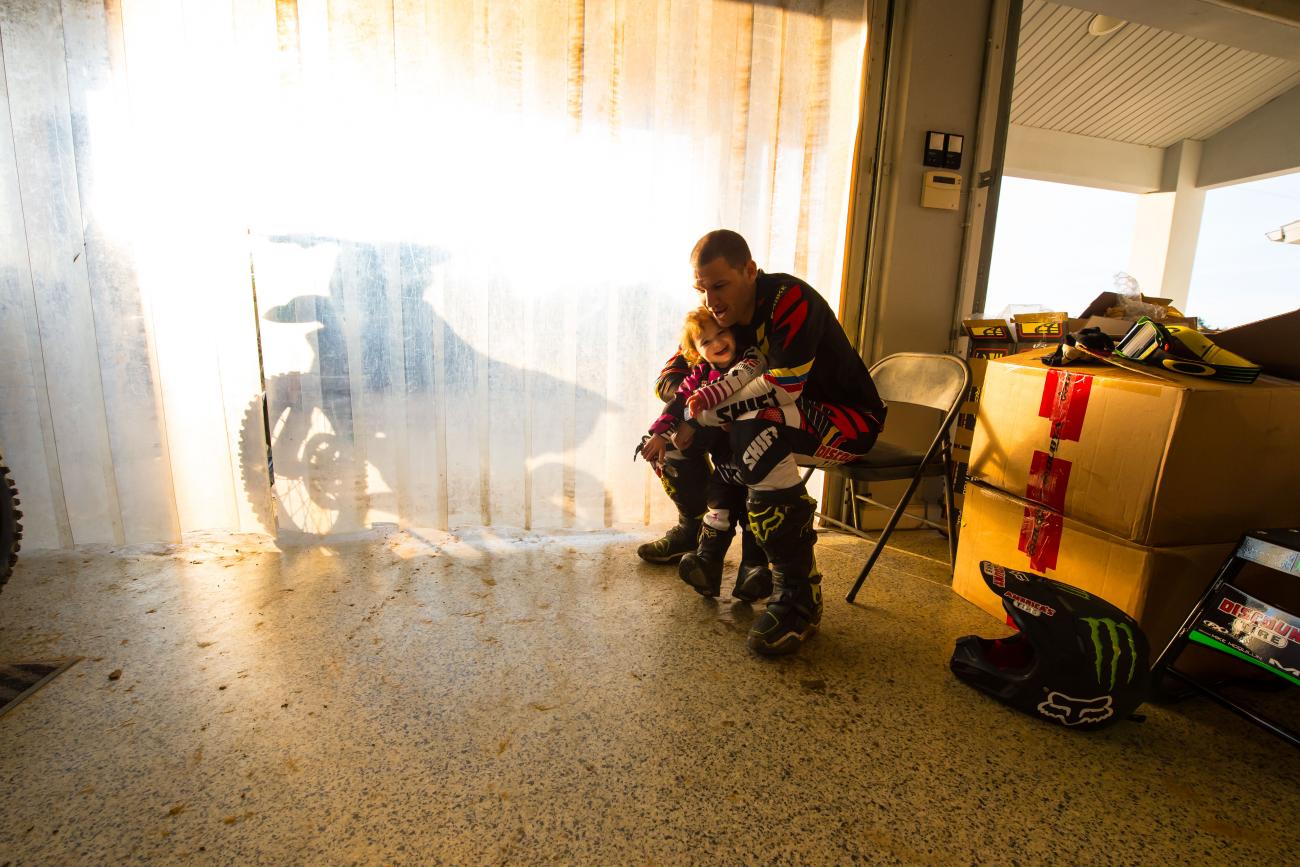 1. Pro riders aren't pro mechanics, but if you ride every day you need to be able to do some work. What could you do? What was your daily checklist? How far into bike maintenance can you go?

Jason Thomas: This one varied a bit during my career. Certain years I had my dad and BTO mechanics there to take care of all the daily duties, making my life much more simple. As I moved further away or my team structure changed, that became less feasible and I had to take it up a notch. My daily routine wasn't too intensive, though. It was generally a tire pressure check, air filter change, oil change, radiator fluid check, and of course, fuel. If I needed anything more than that done, I called in the experts.

Denny Stephenson: To be brutally honest, my mechanical skills don’t go beyond filter, oil, chain, gas, and spokes. When I was a kid my dad would try to get me more involved, but his patience was limited and I’d usually mess something up and be back inside polishing my white boots, building goggles, designing a new helmet with vinyl stickers, or cutting out new numbers for all the bikes we had for amateur days.

Fortunately for me, once I turned pro, one of my good friends moved with me and he loved to ride and work on bikes. Chris Hunter, better known as KOG, worked mostly for his dad and he let him do pretty much whatever he wanted when it came to dirt bikes. He’d work with his dad for a few hours in the morning, come home and wake me up, and we'd moto all afternoon till dark. We’d wash the bikes that night and I’d sit in the driveway with him while he worked on the bikes. He worked a lot with my dad when he was home, so he had my practice bikes tight. They ran and worked just like my race bikes. His payment? Let’s just say he had a lot of trick and possibly a few "works" parts on his bike. I usually bought beers too when we went out.

And later KOG turned that knowledge into a job in the industry, working for Budman, later as a mechanic for TUF Racing in AX, then as the team manager for TUF. And even when I got back into racing for fun at Loretta’s in the old man classes in 2006 and ‘07, KOG was my go-to and he kept my Storm Lake Hondas running tight once again.

David Pingree: Over the years I got better at working on bikes out of necessity. I had a rudimentary set of tools I’d carry with me because they got left in the back of my truck and I’d had them stolen before. Two-strokes were pretty simple and if I kept clean filters, properly mixed fuel and fresh oil in my bikes I was good to go. They didn’t require a whole lot. I’d always wash it well and nut-and-bolt it before every ride. Spokes and tire pressure were standard too. I was pretty particular about my throttle and clutch cable being easy to pull so I started cleaning those and lubing them every couple of rides. Every couple weeks (give or take) I would drop the practice machine off to my team mechanic and he would tear it down and go through it. Some teams were better than others at helping, obviously. Occasionally I would put a top end in my bikes but I tried to leave that to the professionals.

2. What was your checklist on a riding day? How did you make sure you had all your gear packed, goggles prepped, and food and everything set? Were you literally washing gear every day? Did you have any rituals or schedules? Give us some detail on your regular schedule and routine.

JT: My checklist was very, very basic. I had everything I could ever need in my van. I had tons of riding gear, oils, helmets, etc. all kept in there. I would generally do my laundry for the week and be set.

My daily routine was like clockwork for years. I would wake up around 7, have coffee, and catch up on the world, then immediately do a fifteen-mile bike ride before breakfast. I would shower and eat at around 9 a.m. before meeting at the track at 10. We would ride from 10-3 or so and then head home. There would be some sort of cardio workout (run, bicycle, weights) before dinner and then I’d relax the rest of the night. This happened day in and day out for years. Exciting, right?

Stephenson: I would try and leave as much stuff I could in my truck so I would be less likely to forget something. But I remember literally standing in the garage before I’d drive off to ride and go body part by body part to make sure I had all my gear. Boots? Check. Socks? Check. Kneepads? Check. So I guess you could say I had a mental checklist. I always made sure I had a box of goggle stuff in back seat, so I just built them as I needed once I got to my usual spot to ride: the River as we called it. Deep, deep sand. Throughout the 1990s I spent more time at this barren piece of land along the river next to the airport than I did anyplace else, including my house.

Funny note: I wore full chest protector throughout my mini days and 1990. One day while practicing, I forgot my full shoulder pads and rode for the first time without anything but a jersey. I felt naked at first, but by the end of the day I was used to it and liked it. By ‘92 I started going jersey only and remember my dad asking what I was doing. I said to just go with it. Now, for all you kids reading this, do as I say, not as I did, and WEAR THE FULL CHEST FRONT AND BACK PROTECTOR!

Ping: Like Denny, I always went from my feet to my head and made sure I had protection for every body part. I was pretty anal retentive so I had three or four sets of goggles prepped the night before with tear-offs loaded and in a Zip-Lock bag. That probably sounds like a guy who needs medication or something but I just liked to be prepared. I also packed snacks, lunch, water and sports drinks to make sure I had what I needed for the day. I would head to the track first thing in the morning and go straight to the gym on my way home in the afternoon, typically. Days off the bike included long cardio sessions, usually road or mountain biking for several hours. I always tried to make riding the biggest part of my training with the gym, bicycles and other stuff augmenting it.

3. What kind of garage setup did you have? Did you build some man-cave garage shop? Was it as cool as everyone would think?

JT: My garage was virtually nonexistent. I didn't have a shop setup like many would. I usually just kept tires and oil and the endless amounts of gear we are provided in there. I don't like to work on things, so having the means to do so was very low on my priority list.

Stephenson: I bought my first house in 1991 with my championship money. It cost only $94,000 for 1,900 sq. ft. with a small two-car garage. Unreal, right? The garage was small enough that you couldn’t fit a full-size pick-up in it, and I had a couple roommates who raced and had Jet-Skis. It was toy-o-rama in that garage with probably no less than six bikes in it at any time. So we installed a few cabinets, a work bench, a wall full of shelves, a tire rack, a big compressor, and a parts cleaner tub. We had an automatic race shop. I remember coming home one time to one of the walls being covered in black rubber. Then I noticed one of the rear tires from my practice bike was shredded. Guess the boys had a party while I was gone and decided to roast the tire off in the garage. So let me rephrase that—an automatic race shop/garage of chaos. And hell yes it was as cool as imagined. Or maybe I’ve built it up in my head over the past twenty-four years. I'll go with the former.

Ping: I used to live with Chad Watts [Ricky Carmichael’s mechanic] when I first moved to California. His garage was always pretty dialed, so the first house I bought I went the same route. I put down epoxy flooring, cabinets and painted and finished the entire thing like it was a showroom. During my single years the garage was the coolest room in my houses. I still have a rad garage but its filled with Barbie cars/bikes/scooters/etc. #dadlife