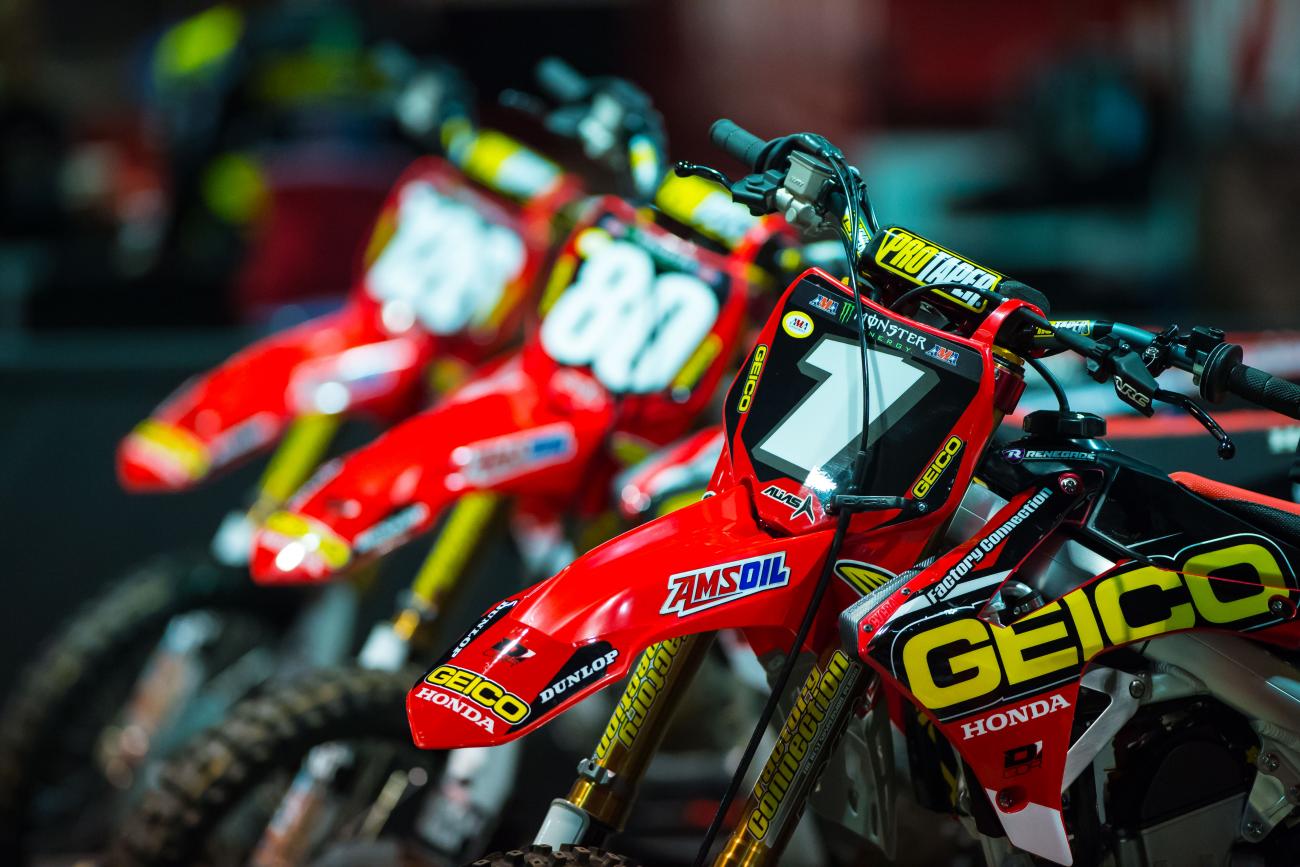 The 250 GEICO Honda team has been on a roll for a number of years. From Trey Canard to Justin Barcia to Eli Tomac to Justin Bogle, the team has racked up lots of wins and number one plates, and it appears from the race this past weekend in Indianapolis that they’re set for the next few years as well.

But this year didn’t start out that well.

Rookie RJ Hampshire had an uneven start after going down hard in practice at the first round and sustaining some pretty serious injuries. But he wouldn’t find that out until after he finished seventh in that night’s main event.

Hampshire required a mid-week hospital stay from his crash and toughed it out for a few weeks doing as well as he could until it came to Daytona. Finally close to 100 percent, he won his heat race in front of his friends and family, and went on to a strong fifth in the main event .

“I started off the year with a handful of injuries and was kind of questioning why I was even out there trying to race and push through it all,” said Hampshire “But now that I'm healthier I couldn't be happier with my decision, because I learned so much and gained so much experience. Ninths were hard to take in when you come from pretty much dominating the amateur stuff the year before.”

This past weekend Hampshire again rode great to land the first podium of his career, and we’re now seeing the potential that GEICO saw.

He’s not satisfied, though, and knows he still needs to get better. “This weekend went good,” said Hampshire. “I'm feeling better and better every weekend. I'm actually getting to ride and train during the week now, so that's huge. I had my best qualifying position out of practice and was riding with a little more aggression. I'm pumped on my first podium but it doesn't really feel like I earned that one; it was kind of given to me with [Joey] Savatgy and [Jeremy] Martin having those problems.”

Smith wasn’t as “lucky” as Hampshire, as he broke his hand in a practice crash prior to the start of the season and missed the first two rounds of the 250SX East Region. Once he got going, it was a little rough;  he missed the main event at his first supercross. He showed good speed at Daytona by easily making the main and finishing well. This past weekend in Indianapolis, he started the main off way back and came around the first lap in fourteenth place. From there, on a track that was biting a lot of riders, Smith rode terrific to move all the way up to a fourth, right behind Hampshire. Smith showed that he’s a fast learner, and although there were a few moments when it looked like it could go sideways, he looked to be the real deal.

Even with defending champion Justin Bogle moving up to the 450SX  soon, with Hampshire and Smith, it looks like GEICO Honda isn’t rebuilding—they’re just reloading.