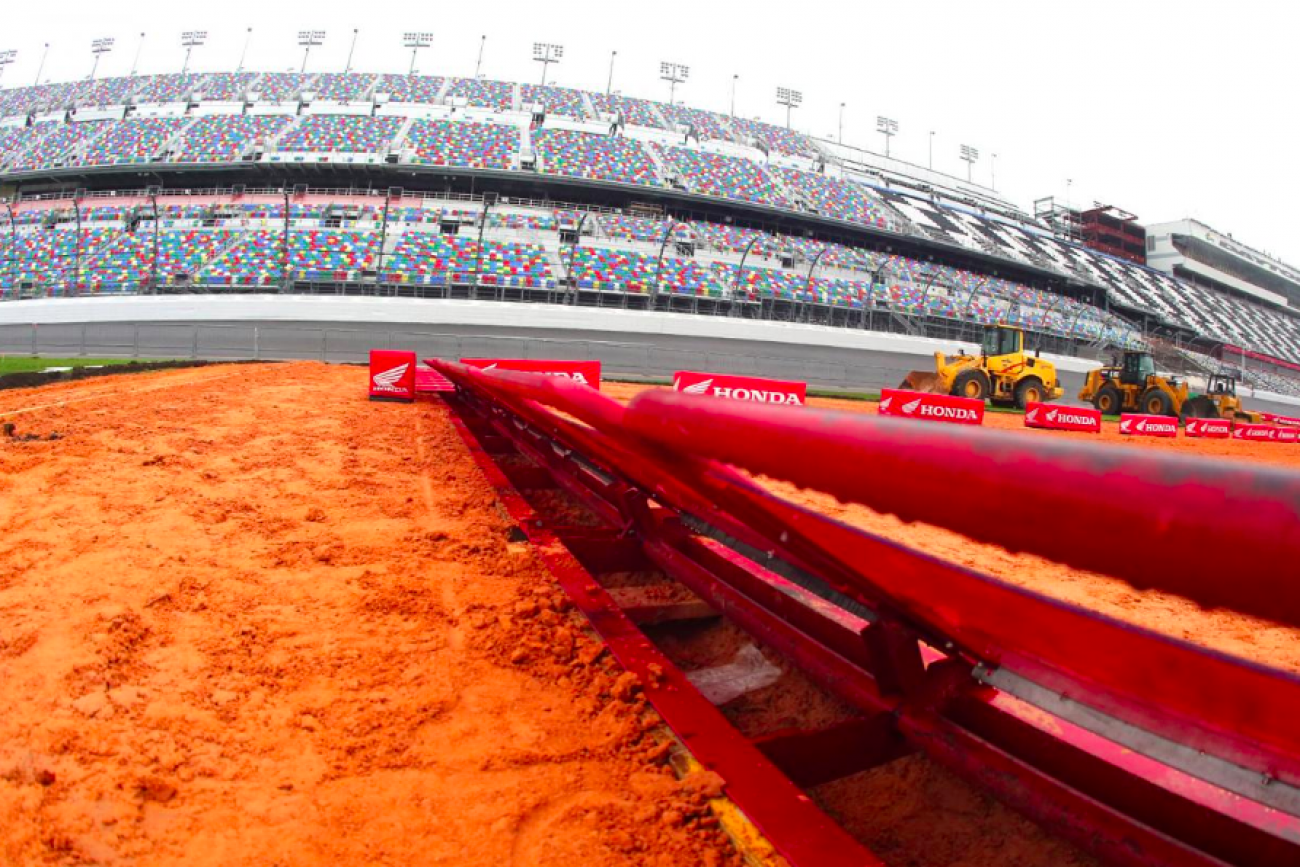 Breakdown Patience is a Virtue

Daytona is such a unique event compared to the rest of Monster Energy AMA Supercross, an FIM World Championship, stops. The atmosphere of Bike Week and the Daytona International Speedway are certainly different, but I’m more concerned with the different track and soil for this column.

The standard supercross track is made with tacky clay that can be molded into whatever the Dirt Wurx crew desires. Feld has an employee that picks out specific dirt for all of their events, and over the years it has become more and more specialized for its composition. At Daytona, though, all of that is an afterthought. The dirt for Daytona is primarily a black sand base with clay added for the jumps and some obstacles. What's important here is how that sand shapes up compared to a typical clay supercross track. Being softer, it forms ruts and bumps and all sorts of nastiness for stiffly sprung supercross bikes. The chassis and suspension technicians have their work cut out for themselves attempting to make a setting stiff enough for massive wall jumps but also plush enough to handle the Daytona chop. It was an ongoing battle throughout the day to find that perfect setup, and most times it was simply a compromise between both sides. Due to the jumps, the supercross setup has to win, because landing huge jumps and obstacles on soft suspension is not a good idea. That means the bumps and chop will have to be handled with the stiff suspension, which is far from ideal.

As I watched the race, I noticed how differently the riders attacked the track and how those approaches resulted. As I said, the track at Daytona turns into a rough, bumpy track by the end of the night. In the turns, the ruts get deeper and deeper with big acceleration bumps and grass clumps. The soil doesn't break down consistently, so there will be bumps when exiting the turns that really make accelerating tricky. There were two different ways of dealing with that. For most of the riders, they just poured on the aggression. The sandy Daytona traction allowed for a plethora of RPM and throttle, which was overwhelmingly the most common of all techniques on Saturday. While moderately effective, there was a better way. Not shockingly, Ryan Dungey, the 450SX Class winner, used it.

Ryan Dungey was approaching the turns much more methodically. It’s his standard technique, sure, but it really was working as the track deteriorated. The key component is that he really doesn't do a lot; he uses neither the brakes to slow down nor the clutch to accelerate excessively. He lets the bike roll through the turn and keeps his momentum flowing. The suspension stays free and plush, soaking up the bumps while not under a heavy acceleration load. After passing through the roughest of the bumps, he applies the throttle and the bike accelerates freely. The key here is that he was actually waiting to apply a lot of throttle. Had he accelerated hard in the bumpier section, the bike would have bounced everywhere but forward. Not only would it be slow, it would have taken a massive amount of energy to hold on to an orange bucking bronco. It’s a technique that may appear slow but on the stopwatch is deadly fast—somehow it’s actually faster to get on the gas later instead of sooner. Dungey was riding patiently, waiting for the right time to be aggressive, when the track would allow it. Slowing down to go faster is a term that is thrown around constantly in this sport, but in this case, it was absolutely correct.

Ryan Dungey has shown this season that he can win on any style of track. This year marked his first Daytona win, and watching it in person, I could see why. He struggled badly in timed qualifying, but he elevated his game when the racing started. It was a how-to of technique on a very technical and rough track. As they say, patience is a virtue. For Ryan Dungey, that patience in his riding paid dividends at Daytona.