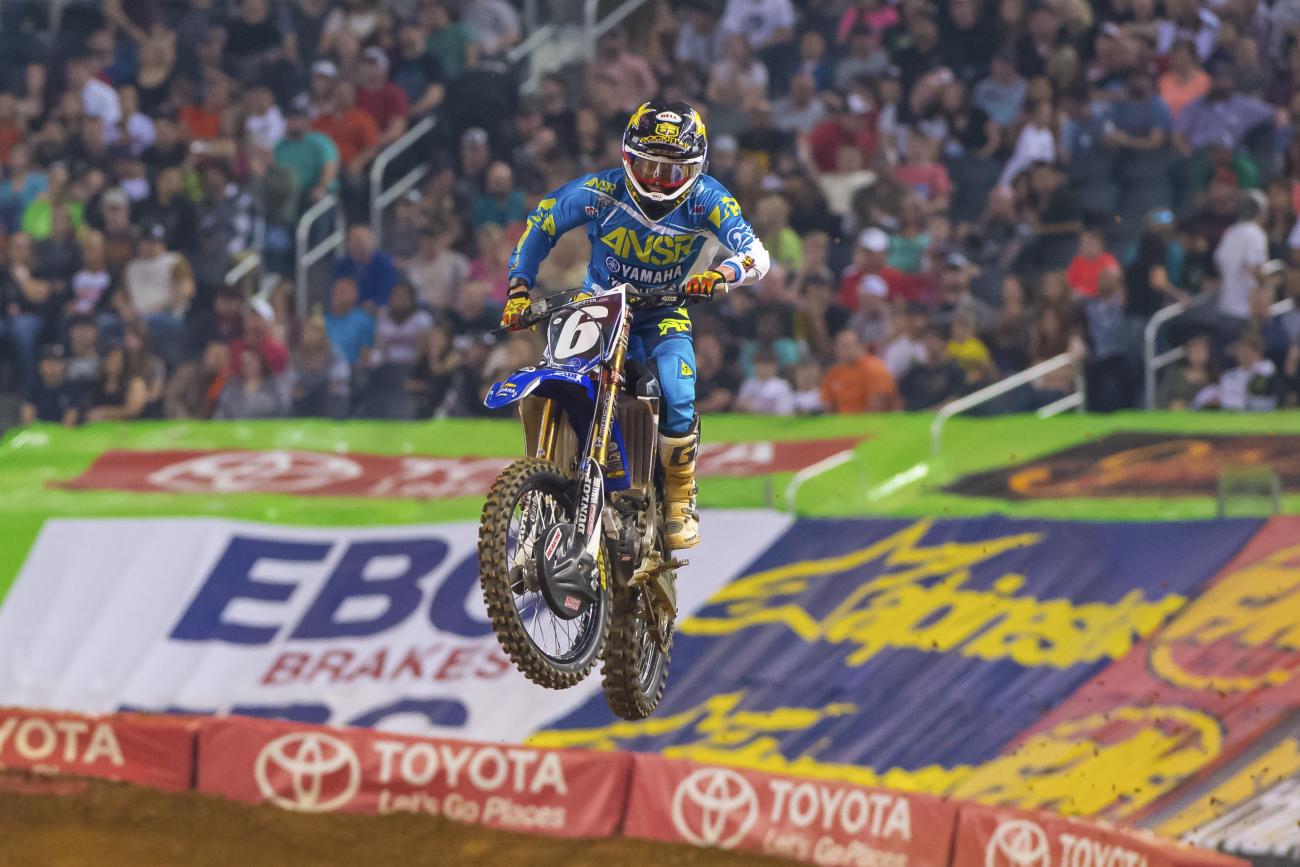 The folks at Feld Motorsports trucked in new dirt for the race, and it had a much softer, sandier consistency than the rock-hard stuff usually seen here. “I thought the track was much, much better than years prior. It was good. I thought it was technical, and it got rutty in some places,” said Trey Canard, who won on the old dirt in 2011.

That said, the new dirt was deceptive in spots. A few sections got slick and polished, and by the end of the main event the bikes had dug down to the floor in spots. American Honda’s Cole Seely had a semifinal crash that sent him to the LCQ. “I felt like in one lap the track went from tacky to like ice,” he explained. Seely had another washout in the main event, and he finished tenth.

Following a podium at the opener, Rockstar Energy Racing Husqvarna’s Jason Anderson results have waned a bit, as he failed to reach the top five, going 6-7-10-9-10. In Dallas, he nearly got there, finishing sixth—keeping his top-ten streak alive. “I’m climbing my way back up again and ended up sixth,” he said in a team statement. “The track was a little bit sketchy with the lines and there was concrete in spots. Other than that I’m not too bummed on the night. There were a lot of weird crashes tonight and, on a track where so much could have gone wrong, I feel like I kept my head and rode smart and stayed up. I just have to keep riding solid and keep the top-ten streak alive.”

Anderson moved a bit closer to his early-season mojo, and so did BTOSports.com KTM’s Andrew Short, who scored a fifth, matching his season-best from Anaheim 1. Last week, Short told us he was still working his way back into form after a big crash at Anaheim 2. He’s back on it now. “I felt comfortable out there tonight and starting to get my mojo back” said Short in a team statement. “The team is working hard and we are looking forward to next week.”

In his second race back from a back injury that sidelined him for Anaheim III, Broc Tickle was inside the top ten for a second straight week—his fourth top-ten in six rounds. “I made a couple of mistakes at the end but it turned out for the best because it got my intensity level up,” the Soaring Eagle Jimmy John’s RCH Suzuki rider said in a team statement. “I’m not stoked with my riding, 100 percent. I kind of felt like I did last weekend where I wasn’t totally comfortable. I need to work on some stuff this week so I can get better. Working on the little things is going to help me a lot.”

Davi Millsaps didn’t look like Davi Millsaps at the beginning of the season. Last week, the Monster Energy Kawasaki rider finally announced that he’s been dealing with an illness for “months” but is finally starting to get his strength back. In Dallas, he looked liked the 2012-2013 version of Davi Millsaps. He pressured Ryan Dungey for the lead early, lost a spot to Ken Roczen, but tangled with Trey Canard on the wall near the finish line. He left the race with a sore neck but should be good to go this weekend. “Things are starting to come together, but some bad luck has come up and bit us this week,” he said in a team statement. “I feel like I had a podium finish tonight, but then I got hit from behind and it ruined my race. I'm sore right now, but I should be good to go in Atlanta next week.” For his part, Canard told our Jason Weigandt, “I got his rear wheel on the wall. Those things are kind of sketchy. I kind of boosted him and he kind of landed funny.”

At first glance it looked like the Millsaps crash was a classic loop-out, but suffice to say someone at Millsaps’ level doesn’t loop out on accident (the rest of us might be a different story). The Kawasaki folks took us into their team hauler after the race to show us footage of the crash, and explain that when Davi’s bike went airborne, a quick tap from Canard’s front wheel was all it took to rotate it straight up. It’s the same theory as grabbing a drill bit with your hand to prevent it from rotating—the drill itself will try to turn instead.

AutoTrader.com/Toyota/JGR Yamaha’s Weston Peick returned to action after missing a month after breaking a bone in his foot at Phoenix. It sure didn’t look like Peick missed any time, as he was fourth fastest in the final 450 qualifying session, and scored a solid second in his heat race. Then he crashed hard in the first turn of the 450 main and twisted his knee, ending his night. We saw Peick after the race and he told us he’ll be fine for this weekend.

After losing his ride with CycleTrader.com/Rock River Yamaha, Ben Lamay returned to action on a borrowed Yamaha (without any graphics!) in Dallas. He basically put his suspension on there and went racing, but failed to make the main event. Lamay lives in Texas these days, so this race was easy to go to. He doesn’t know if he’ll find a bike (or a ride) to go race in Atlanta.

You might have seen the final lap of the 450SX last chance qualifier, where Nick Wey shoved Kyle Chisholm aside to steal the final transfer spot in the last corner. That’s just classic LCQ warfare. Chisholm had made four mains in a row previous to this. This was Wey’s third in seven races.

Let's take a look at the lap times, shall we?

Even if you watched every lap in Dallas, if someone asked you to guess who had the third fastest time, you wouldn't have named Blake Baggett, would you? That's impressive. Also, have a look at Andrew Short's work: tenth fastest time, fifth place in the race. Veterans know how to get it done.

Check out Dungey and Roczen both setting their best laps on the same lap—lap ten. Think those guys were pushing each other a bit?

Martin Davalos has dug an early hole in the East Region. In his first 250SX race since St. Louis last year (he did race 450SX in 2015) Davalos jumped out to a great start but tangled with Justin Bogle in the second turn. Davalos couldn’t find a “good flow” following, and only managed a ninth-place finish. “I couldn’t find a good flow to get going, then we obviously had the restart,” he said in a team statement. “This was a tough track to make a pass on anyone. I just kind of rode around for ninth.“ After just one round (of eight) he trails Marvin Musquin by 13 points.

No one was quite sure how Swiss import Arnaud Tonus would adjust to Monster Energy Supercross. Some foreign riders adjust quickly (see: Christophe Pourcel etc.) while others struggle. Tonus, who pushed Marvin Musquin to the edge in qualifying before finishing second, was a mixed bag at the opener. Yes, he qualified fast, but he got caught in the Davalos crash in the main and finished eighth. “I am happy with how I was able to ride today,” Tonus said in a team statement. “In the main event, I didn't get a good start but when the red flag came out, it gave me an advantage. I was able to charge hard the last half of the race and make up some positions. With my first race over, I'm feeling more comfortable and I'm ready to get back to racing in Atlanta.”

Also caught in the melee was Jimmy Decotis. He struggled to get back into contention, finishing fifteenth. “The struggle was real on Saturday night. Moving forward!” he said on Instagram.

RJ Hampshire’s rookie debut almost ended before it even started. The AMA Horizon Award winner had a scary crash in practice that almost sidelined him for the night show. “There was a time there where we didn't even know if they'd let me race in the night program,” he said in a team statement. Eventually cleared to race, Hampshire battled to a seventh in his debut. Considering how his day started, he was just happy to be racing. "I wasn't too concerned about my finishing position; it was more about turning laps and hitting my spots," Hampshire said. "My speed seemed good. I can improve, for sure, but I'm where I should be probably at this point. I think there are some things I can work on in practice that will make it better for me next week. I need better starts and I need to avoid trouble. One of my main goals is to race every lap of every main event this year."

It was an eventful for night another rookie, as well. Traders Racing’s Nick Gaines survived a scary crash (which could have been much, much worse) in his heat race when Smartop/MotoConcepts Vince Friese failed to clear the triple and Gaines, who did triple, clipped his back wheel. In the LCQ, Gaines had the win on ice, before crashing in the whoops with one lap to go. A devastating night for Gaines, but one he can take solace in, because he showed a lot of potential.

CycleTrader.com/Rock River Yamaha’s Luke Renzland had troubles in his debut, going down in the rhythm section. He would finish twelfth. “I started the main on a bad note, going down in the first rhythm section with another rider which set me way off in last,” he said on Instagram. “But thankfully I was able to regain my composure and charge back to the pack fairly quick. Then the red flag comes out and I get to experience a single file restart but overall, I ended up 12th on the night which is a solid foundation for me to build on for the rest of the season.”

AG Motorsports Gurrnaid Energy’s Kyle Cunningham is expected to return to racing this weekend after a scary crash Saturday night. He told Racer X’s Aaron Hansel that he was “very sore and with plenty of road rash” but hopes to race. Cunningham, who the broadcast caught lying motionless on the finish line, high-sided right into the lip of a jump. We will have information if it becomes available.

JAB Motorsports’ Matt Lemoine’s fifth was impressive on Saturday. It became even more impressive when you look at what he rode through.

The stuff people don't see racing through pain! Couldnt of even thought about doing it with out @swanie387 helping me.

He later told our Steve Matthes that the crash in practice affected his confidence. “In practice I cased that back triple, blew my hand off and both of my feet. I took the second practice just to see how I’d feel. The Asterisk guys took care of me, and my trainer, Gareth [Swanepoel]. But I had zero confidence in myself. I was riding so good, and then that happened; it brings you down mentally.”