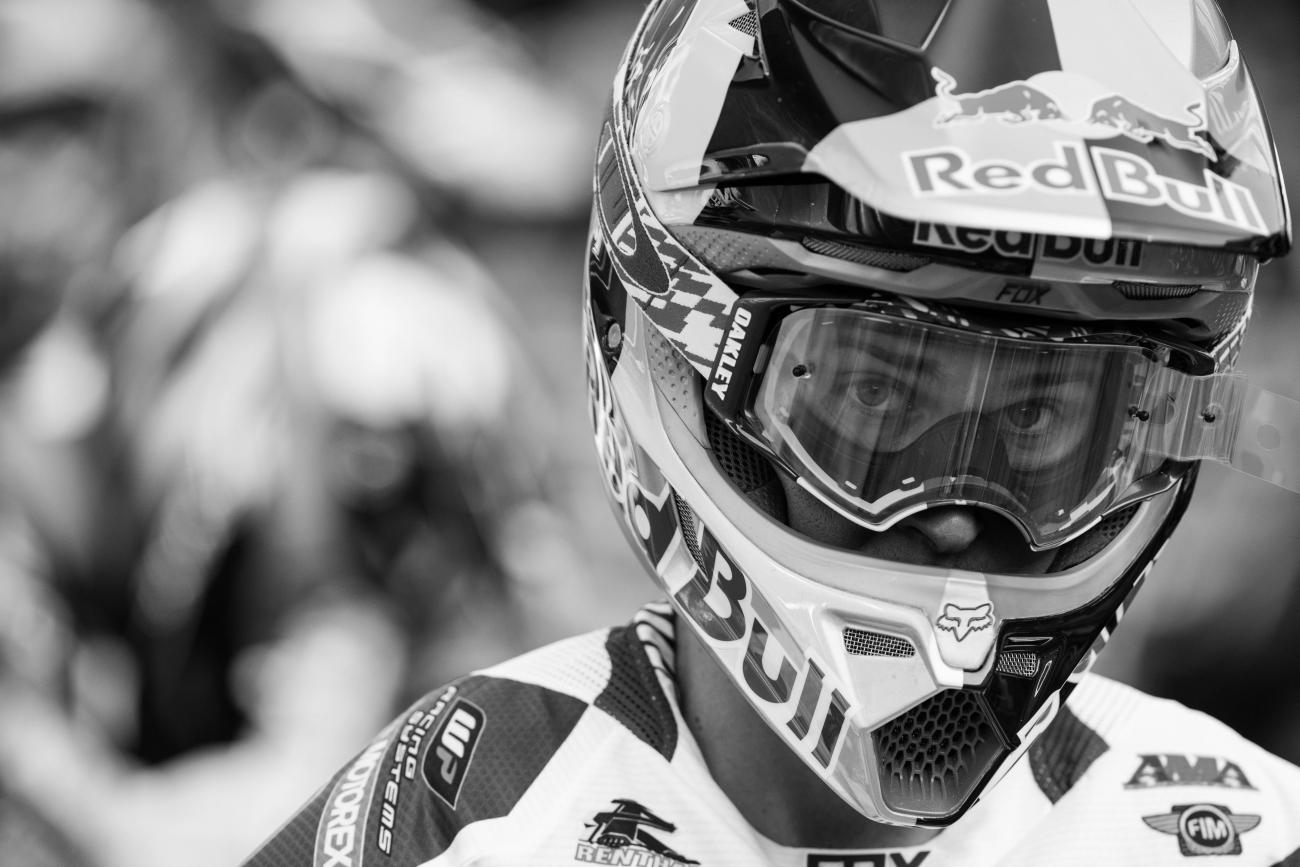 Ryan Dungey doesn’t waver. He’s always Ryan Dungey, and Dunge does what Dunge does. He’s doing it right now, plotting 4-3-2-2 finishes in four rounds of Monster Energy AMA Supercross, an FIM World Championship, and now carrying the points lead. It’s tempting to say this is typical Dungey, but he doesn’t always end up as the points leader or always end up winning the title. What the Dunge does is race at a high level every week, every year. He sets the bar at a certain and very high level, and then never wavers. With that technique, he might not always win the title, but he will put a lot of pressure on everyone else to beat him.

You want to win the championship? Here’s the bar. You’ll have to go over it.

And that bar is high. It’s been cleared by a few, but such a feat has proven risky. Ryan Villopoto cleared it consistently, but also compiled a rash of gruesome injuries and missed races while the Dunge continued on, always keeping that bar at the same level.

James Stewart would get over the bar at times, but after clearing it for maybe a few weeks, he would crash back below it. Last summer Ken Roczen got over the bar, but it was a very difficult level to sustain, and his energy reserves began to wane. He barely hung on in the end. Others have gotten there; with Trey Canard clearing it and holding The Dunge to a second-place finish as recently as last weekend. Chad Reed has cleared the bar, too. Sustaining it is the challenge, though. The Dunge never wavers.

Of course, the never-wavering Dungey pattern, the idea of getting that bar to the same fixed height and leaving it there for years on end, has led people to think he purposely holds back from going over it himself. It does look that way from the outside, but to the rider’s eyes, it’s rarely the case. Even the smooth guys, the tacticians, feel like they’re pushing as hard as they can, no matter how much they appear to have in reserve.

Kevin Windham once told me that everyone tells him he looks smooth, but as soon as he tries to push it any harder, he starts sliding, losing traction, and losing time. Dungey said the same at Anaheim 2, when he was trying to run down Roczen. Holding back is simply not on the menu at this level. No one is good enough to get on the podium in a supercross race while holding something back.

So it all leads to a little disconnect, right? There’s Dungey, doing incredibly well but also appearing to have the potential to do even better if he’d just hang it out more. Make those passes more quickly. Or be more aggressive or intense…whatever it is the world wants to see. Why does he get picked on? Because every week he’s darned good but also so darned close to greatness. He’s third, but maybe he could have won. Second, but maybe he could have won. And there we go, on with Dunge, asking him about this, getting the same answers. He will tell you he doesn’t hold back. He will tell you the goal every week is to win, not just podium.

But here are some numbers:

Dungey has been in eighty-seven 450SX mains and has sixty career podiums. That’s 69 percent, which is amazing, but Chad Reed, the all-time career podium leader, sits at about 73 percent. Dungey has been out of the top five only eleven times in his career, which means seventy-six top-fives, or 87 percent of the time, where Reed is about 83 percent. Dungey has thirteen wins, which is a 15 percent win rate. Reed is at about 25 percent.

Reed is perhaps the all-time mark for consistency in the sport, but he wins more often than Dungey and also finishes out of the top five more. Dungey is a machine when it comes to top-fives, and that’s significant because this is a sport that doesn’t always greet top-fives with high-fives. Wins are awesome, podiums heralded. Dungey lives in that mix, he sets the bar right there, but occasionally someone goes over it. The question is, can they sustain it? The chase for this year’s title might come down to that. Others may feel they can beat Dungey on any given weekend, but he makes it awfully hard to do it over the long haul.