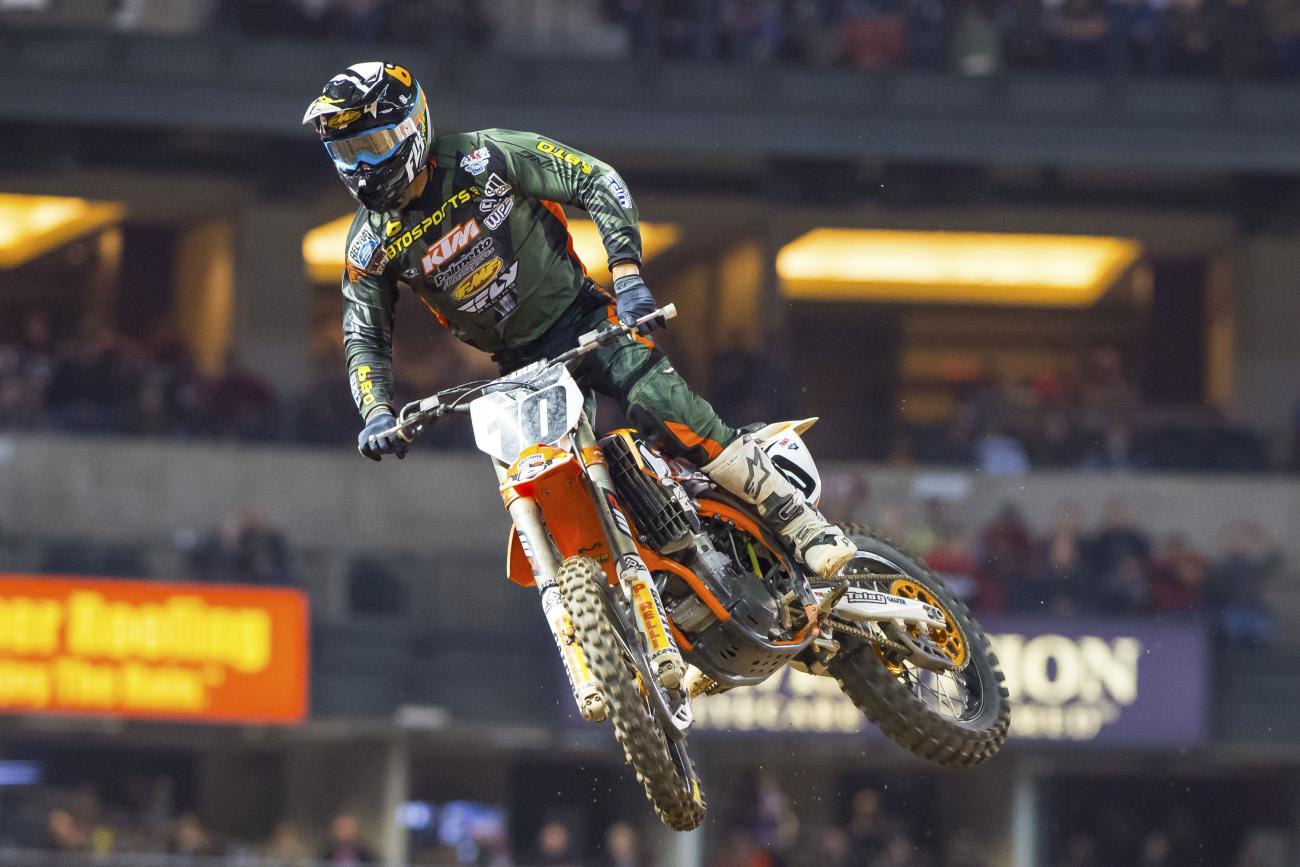 Mike Alessi – Knee
Comment: Alessi tweaked his knee in the main event at A2. He had a minor procedure on his knee last week, but was riding less than a week later. “Not a bad day 6 days out of surgery and we back on the dirt cycle,” Alessi wrote on Twitter earlier this week. As of today, Alessi is going to try and race this weekend. Stay tuned to our Race Day Feed Saturday for more.

Justin Brayton – AC Separation and Fractured Vertebrae
Comment: Brayton sustained a grade-three AC separation and three fractures to his T-5, 6, and 7 vertebrae in his back when he crashed in his semi at A2. Currently there is no timetable on his return, although Brayton hopes to be back at some point this season.

Cade Clason – Shoulder/Knee
Comment: Clason cross-rutted the first triple in practice at Oakland. He landed, sans bike, and while trying to get up, the bike landed on him. He dislocated his shoulder and jammed his knee in the crash. “Honestly, I ended up pretty lucky for how bad it could have gone,” he told us via text earlier this week. When he went to the doctor, they found that he had a previously torn labrum. He will rehab the next two weeks at Club MX and hopes to return by Dallas.

Wil Hahn - Arm and Back
Comment: Monster Energy Kawasaki's Wil Hahn will miss the duration of Monster Energy Supercross following a crash at Anaheim 1. Hahn sustained a number of broken bones, including his arm, ribs, and two vertebrae. He underwent a successful surgery on his arm and has returned home to begin his recovery. Hahn hopes to return for Lucas Oil Pro Motocross.

Matt Moss – Shoulder
Comment: According to MotoOnline.com.au, Matt Moss separated his shoulder training and will miss six weeks, effectively ending his Monster Energy Supercross season, as he will return home to contest the Australian Motocross Championship.

Weston Peick – Foot
Comment: Peick suffered a broken bone in his foot when he cased a triple in in Phoenix. Peick had a screw installed to stabilize the broken bone and attempted to ride practice at A2 but re-injured his foot. Currently there is no timetable for his return. Phil Nicoletti will fill in for Peick until that time comes.

Tevin Tapia – Shoulder
Comment: Tapia separated his shoulder in practice at Phoenix. He tried to race Anaheim 2, but it put more stress on the shoulder so he decided to skip Oakland. He will try and race this weekend.

Broc Tickle – Back
Comment: Tickle cased the same triple as Ken Roczen in the main event in Oakland. He sustained a back injury that forced him to pull out of the main. He went to the hospital for precautionary reasons and was later released. Broc and the team decided to sit out this weekend to let his back heal and return next weekend in San Diego.

Dean Wilson – Torn ACL/MCL
Comment: Wilson underwent successful surgery earlier this week after tearing his ACL and MCL at the KTM test track last week. “My doctor said the surgery went well and I’m looking at a regular rehabilitation process for my knee,” said Wilson in a team statement. There is currently no timetable on his return.

Matt Bisceglia – Concussion
Comment:  Bisceglia went down in practice at Anaheim 2 and decided to sit out the following weekend in Oakland, saying: "I feel like I could ride right now but the doctors play it real safe, and it's probably in the best interest of my long-term health.” After missing Oakland, Bisceglia will return this weekend at Anaheim 3.

Darryn Durham - Wrist
Comment: Durham crashed at A1 and bent a screw in his wrist. He underwent surgery this week and plans to be back on the bike in roughly four weeks. He’ll line up again in Houston.

Michael Leib - Leg
Comment: Leib underwent surgery Sunday to repair his right tib/fib, his right foot, right big toe and left pinky toe after a crash in practice in Oakland. “Out of surgery from early this morning. Looks like the operation went well. Time to heal up now,” said Leib. He is expected to miss the remainder of Monster Energy Supercross.

Zach Osborne – Fractured Thumb
Comment: Osborne suffered a fractured thumb in his heat race at A1. It’s a clean break and Osborne plans on racing in Anaheim 3.

Landon Powell – Ribs
Comment: Powell will miss Anaheim 3 after crashing hard while practicing during the week. He issued the following statement on Instagram: “After getting a second opinion and follow up X-rays yesterday, I found out that I have 4 broken ribs on my left abdominal. Unfortunately this means I will be off the bike for a while and will not be able to make my return until Houston.”