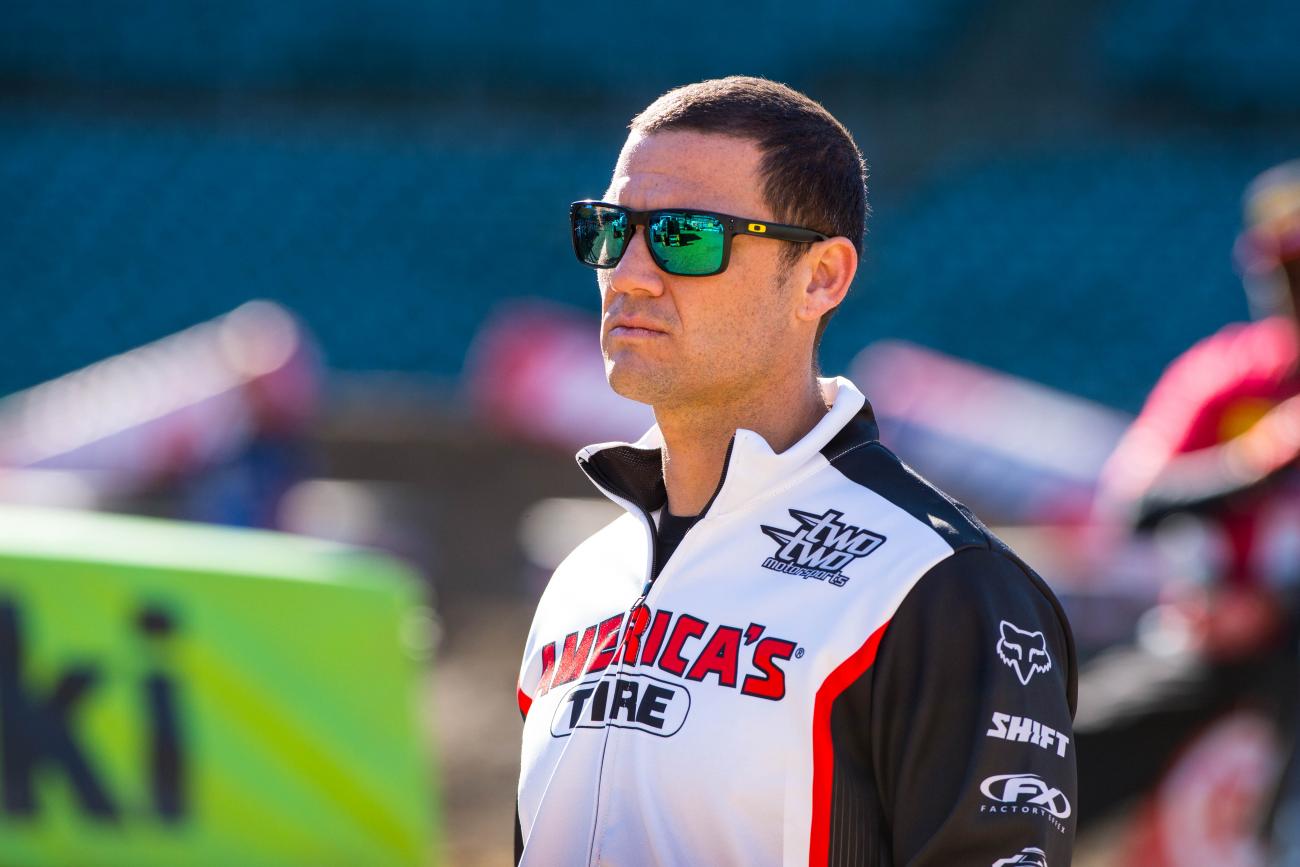 Tyler Bowers absolutely clobbered Cooper Webb in Oakland. The previous week, Webb put a block pass on Bowers. At Oakland, Bowers said his move wasn’t on purpose, but Webb felt it was, describing it as a “cheap shot” and hinting that there could be some payback in the future. Well, tomorrow night is the future, and whether or not Bowers meant to smash into Webb last week, all eyes will be on these two during the 250SX main to see whether they’ve shelved or fostered this emerging rivalry. –Aaron Hansel

The last time Ryan Dungey held the 450SX points lead was when he left Oakland tied with Chad Reed in 2012 (Dungey had sole possession the week prior). Now Dungey finally has those snazzy red number plates back after Ken Roczen attempted to adjust the bend of his bars with his face on a triple last weekend. What Dungey doesn’t have yet in 2015 is a win, but that could all change tomorrow night. Let’s see if those red plates provide extra speed or extra weight. -Hansel

Last Saturday night marked Trey Canard’s first 450SX win since 2011, when he won in Arlington. It was an impressive ride too—Canard made several passes before passing Chad Reed and building a lead. Afterward he was ecstatic, but was also quick to point out that Ken Roczen had some issues. Hopefully the two will hook up in the main this weekend and stage the battle that never materialized last week. To do it, Trey’s going to need a good start, which has so far eluded him this year. -Hansel

In case you haven’t noticed, Andrew Short has been killing his starts lately—his holeshot in Oakland was massive! Unfortunately Short tightened up a few laps in and developed some pretty gnarly arm pump. Ever the optimist, Short said he was looking forward to overcoming the challenge, and that if he gets his head screwed on right he could get in the mix up front. Let’s see if his head is torqued properly at A3. -Hansel

After an astounding display of speed in Phoenix that saw him earn his first ever 450SX win, Eli Tomac has yet to repeat the feat. He hasn’t been bad by any means—he’s taken third and fourth since—but you can’t help but wonder what happened to the guy who smoked everyone a few weeks ago at Chase Field. After the race in Oakland, a frustrated and disappointed Tomac said he got tight, and mentioned he’s had a small issue with that on the bumpier tracks. not the Tomac we’re used to seeing, and we don’t think that Tomac will be showing up at A3 next week either. Look for Phoenix Tomac to be back in the mix tomorrow night. -Hansel

Two week’s ago, not many would have penciled Chad Reed in for a win entering Anaheim 2. He was struggling with his set-up and looked off the pace. Not the Chad Reed we’re accustomed to seeing. Now, a week after his 126th career 450SX podium, Reed is a legitimate threat to pass Jeremy McGrath and James Stewart on the all-time Anaheim wins list with nine. A big part of the turnaround, according to Reed, was a bike change. “The first two races, truthfully, I was confused. I wasn’t having issues at the house, and then the race bike wasn’t really cooperating and feeling and handling the way that I was kind of used to it handling,” he told Racer X after Oakland. Does Reed have more Anaheim magic left in the tank? – Chase Stallo

Back in the Chase

The past two weeks have been damaging to the title hopes of Jessy Nelson and Justin Hill. Each tossed away seemingly certain wins at Anaheim 2 and Oakland, respectively, and both now trail Cooper Webb by more than 14 points. “I had a good heat race and honestly should have won that main. It’s pretty tough to swallow…” Nelson said following A2. “I’m really bummed about tonight’s result. I’m going to do my best to bounce back at Anaheim 3 next weekend,” conceded Hill last weekend. Time is running short on the pre-season title hopefuls. Can they get it done in the last visit to Anaheim in 2015? - Stallo

Malcolm Stewart has come a long way since his professional debut in 2011. He’s always had the sheer speed, but lacked consistency. Take a look at his results from his first season: 14-8-7-4-20-19-4-5. The next two years looked similar—spots of brilliance, followed by costly mistakes. Last year, Malcolm reigned in those mistakes and it showed in his results (8-5-3-16-6-3-3-9-5). His trend upward culminated in his first career win last weekend. And, aside from an opening round crash, he’s put in his most consistent results of his career (22-2-5-1). That’s something he hopes to continue this weekend. “Whether I win, get second, get third, let's get it on the box,” he said in a team statement. – Stallo

The Strikt Slaton Yamaha trio of Cole Martinez, Scott Champion, and Zack Freeberg capped a hot start to the season last weekend with all three finishing inside the top fifteen for the first time all season. Combined, the team has six top-fifteen finishes this year, with Champion (1) and Freeberg (2) setting the benchmark with twelfth-place finishes. Keep an eye on the young team heading into A3; it could propel you in Racer X MotoDynasty Fantasy. – Stallo

“I was able to maintain my pace through the main event, but if you’re not at the front from the beginning it’s hard to find that extra second each lap while in traffic,” said Davi Millsaps following Oakland. Millsaps, who struggled the previous week at Anaheim 2, was much better last weekend, starting sixth and finishing seventh, and appeared to be much more comfortable. As we’ve seen with Chad Reed, small adjustments can make all the difference, especially in the case of Millsaps, who’s on a brand new bike. Will he continue his march toward his first podium of the season this weekend? - Stallo