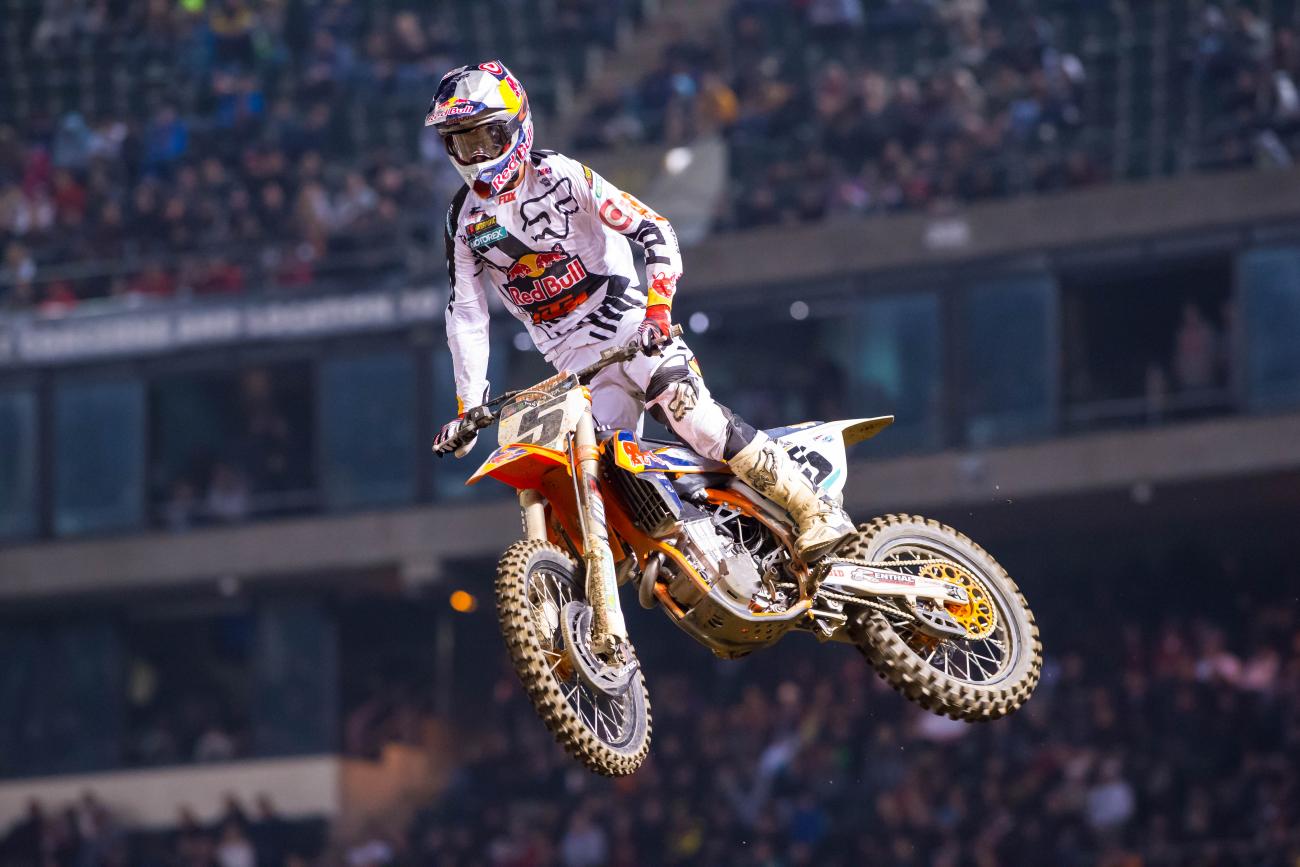 Rev Up Round Five

Hello, everyone, and welcome to the Rev Up. What if I told you that by round five of the 2015 Monster Energy AMA Supercross, an FIM World Championship, that:

Some of those points may be more believable than others, but what a season it has been thus far! The best part about all of this is that the tension in both championship classes is continuing to build. In fact, there has been more smack talk in the 250 West Region than we have heard in years. That class has been on fire week in and week out, and with Red Bull KTM’s Justin Hill and anyone from Monster Energy/Pro Circuit Kawasaki yet to win, the business will be picking up exponentially for our third trip to Anaheim.

Meanwhile, just when things were beginning to look like the Ken Roczen show, the RCH/Soaring Eagle/Jimmy John’s phenom went out and blasted his face on lap two of the main event in Oakland. We were very lucky to have not lost the German for the season on that one. However, the damage was done. Red Bull KTM’s Ryan Dungey now leads the charge, and while he has yet to win a main event, his 4-3-2-2 finishes have been the high water mark in an absolutely packed class.

Sadly, the beat down continues in this division as Weston Peick, Dean Wilson, Wil Hahn, Justin Brayton, and now Broc Tickle will all miss the starting line this weekend due to injury. Supercross is as gnarly as it gets; that’s why each weekend we all kind of have to breathe a sigh of relief when as many racers as possible make it back to their haulers unscathed.

Round five is already upon us, and it is time for things to intensify from top to bottom. Let’s check out both classes heading into Angel Stadium for the third and last time in 2015.

One of the most famous and cheeky phrases in motocross and all motorsports is: “You can’t take out something you can’t catch!” This kind of applies to Tyler Bowers and Cooper Webb, as the two have thrown down both physically and verbally in the past two races. With Webb being visibly faster than Bowers, but consistently getting worse starts, the odds are favorable that the two will be passing each other in this weekend’s main event. It’s a pretty sticky rivalry with the duo being 1-2 in series points. Add in the fact that they have gained the attention of the FIM and the AMA, and both riders will need to be careful how they conduct their fifteen laps. It’s going to be interesting.

On through the pack it’s awesome to have witnessed three different winners in four rounds, and with Justin Hill throwing away an almost certain victory in Oakland I would look for him to come back with his guns blazing this Saturday night. I think he has the potential to run Webb’s pace. We can’t forget about Lucas Oil/Troy Lee Designs pilot Jessy Nelson either. Nelson dominated Round 1 at Anaheim and was looking to win again inside Angel Stadium two weeks ago when he threw it away. He typically starts well and will be in the mix again this time around.

And what does a win do for the confidence of a racer like Malcolm Stewart? The GEICO Honda rider got the job done last time out, and I would look for him to race faster than he ever has for round five. He is kind of out of the points picture, but if he reels off another win he can jump back into the mix.

It’s good in this class. Josh Hansen, Zach Bell, Zach Osborne, Shane McElrath, and podium finisher Alex Martin are all riding fast. And keep an eye trained on the #66 of Chris Alldredge. Wow, that kid has been a one-man highlight reel so far. He is as wild as he is fast, and he could really shake things up if he can keep it on two wheels.

Obviously I got ahead of myself last week with my talk of #whosSecond, but who would have predicted that Roczen would make such a costly error? He made quick work of GEICO Honda’s Eli Tomac in their heat race and was riding faster than ever. I’m not going to pull back on my thoughts that he is still the man to beat, though. Ken can very easily sweep the Anaheim rounds by winning this weekend, and squash any hope he left American Honda’s Trey Canard and now podium finisher Chad Reed last weekend. It is going to be tough because both of those guys are coming into their own heading into round five.

So, who is really surprised that Ryan Dungey is leading this thing? I suppose I am to an extent, but “The Diesel” has really been on it in 2015. He has been fast when he needed to be and now leads the show by 4 points. I expect him to roll on with another podium, and with his quick and effective start to the series, that red number plate may have found a home for a while.

Don’t look now but Chad Reed is back on the attack. This doesn’t raise my eyebrows at all. He didn’t set the world on fire in the first three rounds, but there was something about his riding that told me the fire was still there. Hey, halfway through the main event last weekend he was the fastest rider on the track and reeling Canard in. Chad won this race last year and boy oh boy would it be a spectacle if he is able to get to the front again this time. I think we awoke a sleeping giant and #22 will be on the gas for Anaheim 3.

Like I mentioned above, things are escalating nicely in both classes. With the 250 West guys only having two more races before their long break, look for the riders to be more aggressive than ever—if that’s possible. Over in the big boys, the theme of the 2015 season is screaming loud ladies and gentlemen. Who’s next? Can Ryan Dungey pick up his first win of the year and cement his status as the guy? Will Ken Roczen shake off the cobwebs and fire back with authority? Can Chad Reed really get a win and blow people’s minds for the 1234th time in his career? Webb vs. Bowers, Justin Barcia yet to make the podium, and a galaxy of other insane scenarios lie in wait. Round five folks. Race time.