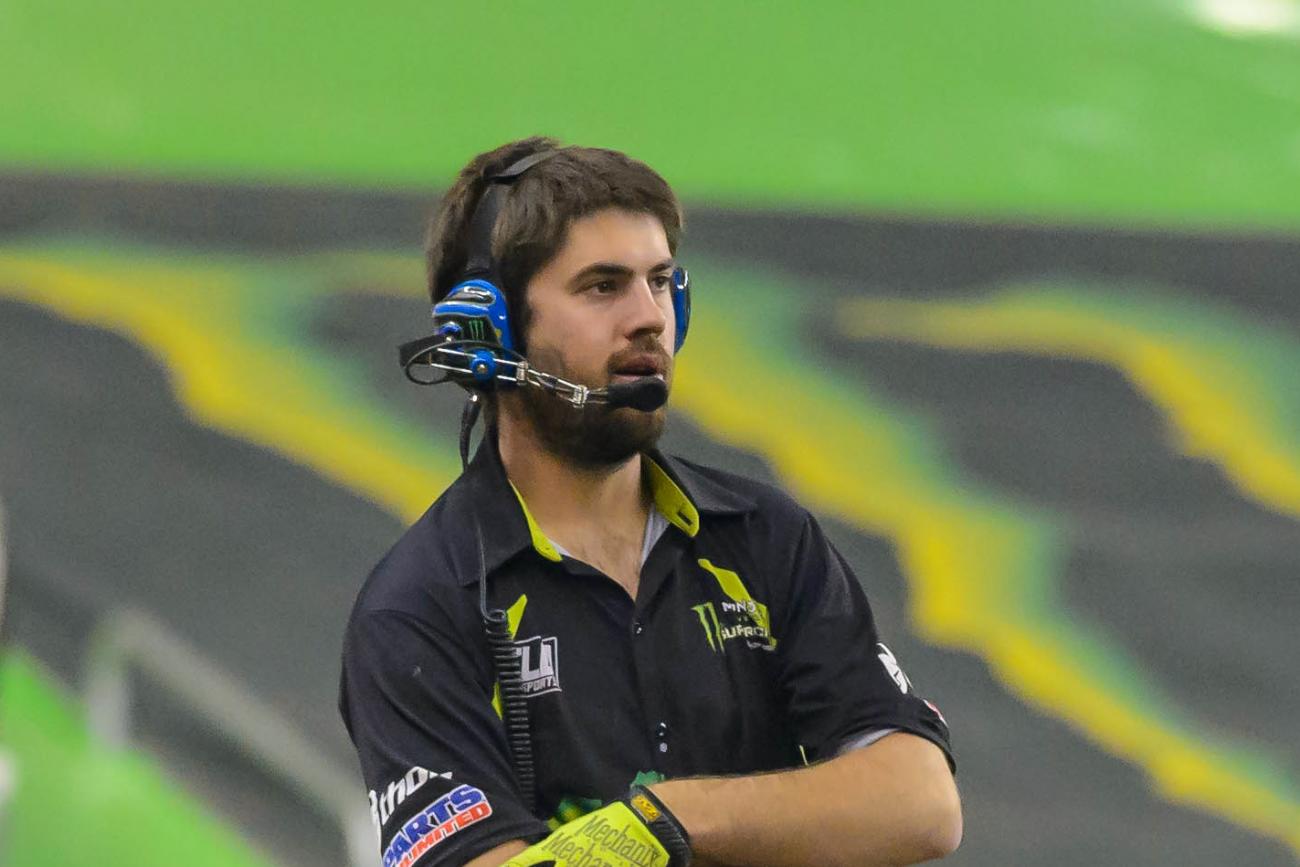 I don’t throw out the term “hero” easily, folks. Tim Ferry, Wendel Clark, perhaps Jeremy McGrath—these are true heroes of the world. But there might be some room in the “Hero Motel” as each and every Saturday night in Monster Energy AMA Supercross, an FIM World Championship, there is a brave group of men known as “Dig Dugs” that put their life on the line to prevent riders from being more seriously hurt than they perhaps already are. You seen them every week, they’re right next to the track wearing helmets, and always at the ready.

Why do we call them Dig Dugs? It’s a reference to the 1980s video game where the main character has a helmet and shovel, runs fast and, well, digs around to kill his enemy.

These Dig Dugs are all about safety, though. There used to be one Dig Dug, then two, and now in 2015, they have spawned and added another Dig Dug to the group. These are the track workers with the all-black helmets that run around the infield to straighten Tuff blocks knocked onto the track, throw one in front of a downed rider, run out onto the track to shield the rider—you name it and the Dig Dugs have done it.

I wanted to interview one of these guys. It could have been any of them, but Luke Minter was the one that I was able to get ahold of and get talk to in-depth about his thankless job and what it’s like being a Dig Dug.

Racer X: What is your official title besides guy who holds thing together?
Luke Minter: I guess I’d just be part of the supercross operations crew for Feld. There’s like twelve of us. I would say operations crew.

Where are you from, did you used to race, and how long have you been doing this?
I’ve been doing this for four years, and I still race a few times a year. I’m from South Bend, Indiana, over by the RedBud way. That’s my stomping grounds. I raced my whole life and still do for fun, but I realized I wasn’t going to be fast enough to make any money and just wanted to be around the sport, and this is where I landed. Definitely like it a lot.

How was it determined you were going to be the guy to put the helmet on and run around the track and potentially save riders? Did you lose a bet?
Last year it was two other guys that had to wear the helmet, and this year we were all lucky enough to lose the bet and we all get to wear helmets. Four of the guys don’t work the track, so they don’t have to wear them. Any of the guys who are on the floor during the practice and the race, they have to wear helmets now.

It’s not easy. Watching you guys out there, you’re busting ass running around. It’s kind of dangerous too, right? But at the same time I guess it’s a little bit of a thrill every Saturday night.
It’s definitely a rush, especially for some of the guys who don’t come from as big of a racing background as me or some of the other people. They’re like, “Man, this is so exciting!” I’m like, “Yeah, dude, why do you think we love this so much?” It’s definitely a rush.

What’s the craziest part of your job? You’ve probably been hit or almost been hit a bunch. Can you talk a little bit about what you do and what the protocol is every Saturday night, if you see a guy go down?
The most exciting part is definitely just when the night show starts off and just being on the floor while all that goes on. Basically our job as the track crew guys is, there’s flaggers out there and there’s medics out there, so if I see a rider go down that’s not obviously going to be jumping up right away, I’m just going to protect him any way I can. I’ll pull out a Tuff block to block other riders from hitting him or hold his bike up or whatever.

We’re just mainly looking at the track to keep as many riders as safe as possible is what we’re trying to do. Equally as impressive, I think, is what the whole crew does, turning these stadiums into race tracks. I get a lot of satisfaction out of that too, honestly. How fast we tear it down after it’s over. It’s amazing when a game plan like that comes together. I really enjoy that too.

Are you telling me that after you run around the track and you put your life on the line, you’re the one breaking the track down at the end of the night? You don’t get out of there until two or three in the morning?
Yeah, definitely. We don’t get out until like three in the morning. We have like eleven semi trailers this year. Everything that’s on the floor gets tore down and loaded up before we leave.

Do you have a radio on, or is your head just constantly on a swivel?
You have a headset inside the helmet or whatever. Even if you weren’t wearing a helmet you’d wear a headset. We have responders in the press box level. Most sections, obviously, I can see my section of the track. I can see down the whole lane, but obviously some of them you can’t see because there’s a berm or a triple or whatever in the way. Definitely want to rely on whoever’s the eye in the sky that week.

Here’s the original Dig Dug that caused me to think about these guys and pay attention to them. Thanks to James Lissimore for the video work. Please notice the similarities to the video game and these guys, and thank them for their service.

You’ve got a helmet on, you’re trying to run, and you’ve got whoops, bumps, and God knows what else underneath you.
I think I’ve seen things happen to a couple of the AMA guys a few times, you see that happen and you turn around to look what else is coming on the track. Then you take off running. It gets wild when you see a big get-off or two guys hit in the air. Everybody’s being told to go into wide-open mode to get there and do whatever we can to protect the guys. I’ve tripped and fallen, run into people, all that stuff.

And you’ve got to be in good shape. You’ve got to be tired by the end of the night.
That’s for sure. It depends what section you’re working. I usually end up with a long sideline, like a long rhythm section or something like that. I definitely get my running in.

Do you remember a video game called Dig Dug?
No, I don’t.

We call you guys Dig Dugs. There used to be two of you, and now there’s three Dig Dugs. In the video game the guy has a helmet on and a shovel. I’ve seen you guys running with the shovels. What’s with the shovels? Are you just kind of instructed to fill in ruts or faces of jumps?
I don’t know. I haven’t had to do anything like that as of yet. You can use them to remove debris or something on the track. Sometimes Monster Jam will be there the previous week, and there’ll be who knows what in there. There could be cables or a seatbelt or anything in the dirt sometimes. You just got dig it out. Don’t want anybody snagging that stuff.

Who are the other two Dig Dugs?
There’s probably six of us now that are out around the track, six or seven depending on the week. We all have helmets. We’re all spread out. There’s an army of Dig Dugs out there.

Do any Dig Dugs wear goggles?
No, but sometimes during the day we’ll wear sunglasses and be Shady Dig Dugs.

It looks like a lot of work. Do you remember one incident that was scary or one that stands out above all the others?
It was my first year and I was working a rhythm lane in Las Vegas that kind of came out of Monster Alley, so they’re going all fast there. Practice was pretty muddy because it was Vegas and they water it because it’s going to dry out. Guys were just all over the place. It was just a pretty hairy couple of practice sections—mud everywhere. I’m like, wait, I’m in Vegas and I’m probably the muddiest I’ve been all year.