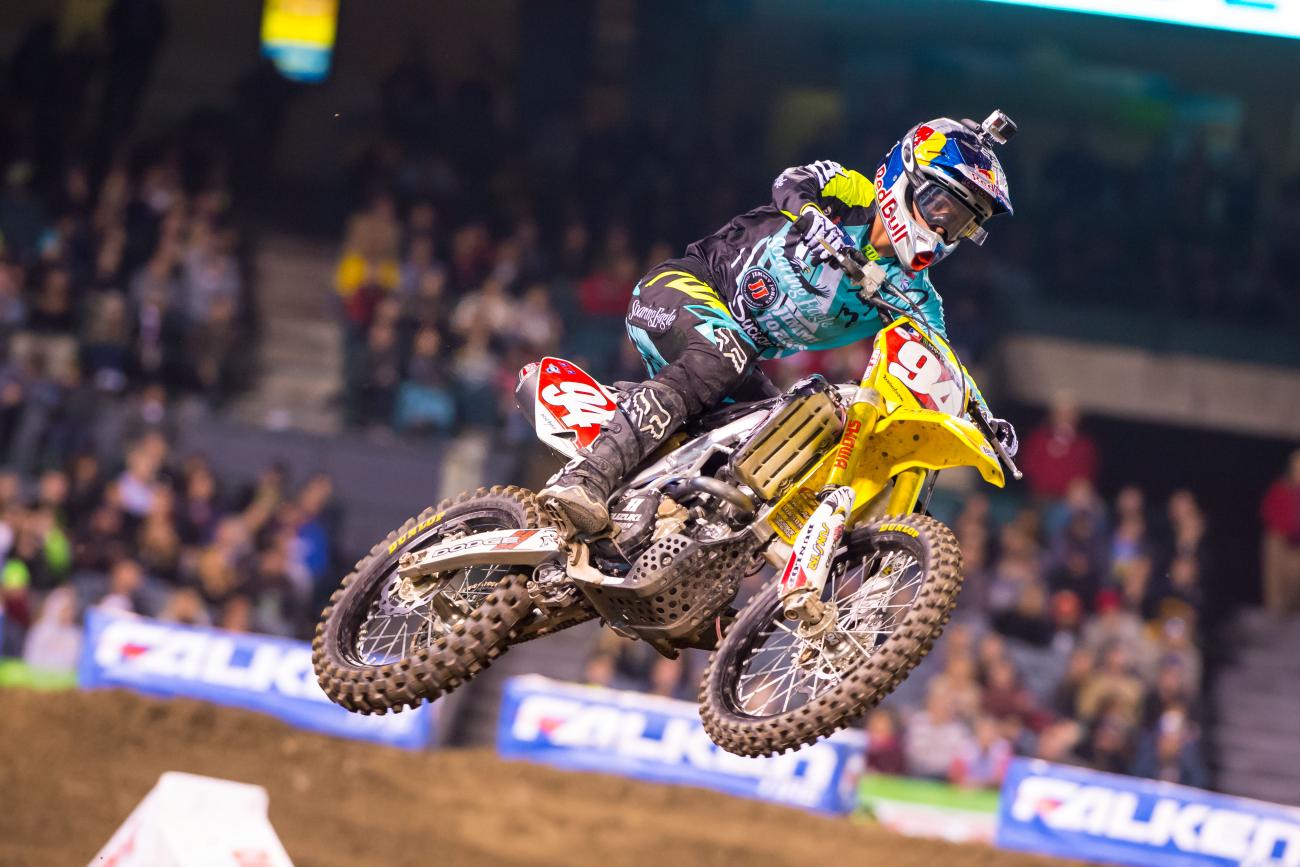 Hello, everyone, and welcome to the Rev Up. Round four of the 2015 Monster Energy AMA Supercross, an FIM World Championship, makes its way to the Bay Area to O.co Coliseum in Oakland, California. And if heading to the Oakland Raiders’ festive end zone area “The Black Hole” isn’t ominous enough, things are quickly turning sour for the competition in both of our championship classes.

RCH/Soaring Eagle/Jimmy John’s Suzuki ace Ken Roczen has amassed a 12-point lead and is perhaps better than anyone predicted. Roczen has yanked three good starts and ridden sixty championship laps with relative ease on his way to two victories and a runner-up. The ever popular #whosnext theme may manifest itself into #whosSecond if the talented young German continues to perform at such an immaculate level. Not to sugar coat it—he’s really been that good. The questions are: Will he crack, and who is going to be there to pounce if he does? In my opinion, we better get used to seeing #94 lead this thing for a while.

Meanwhile, Yamalube/Star Racing Yamaha sophomore Cooper Webb has become a man among boys in the 250SX West Region. Following two resounding wins in a row, Webb can begin a streak this weekend in Oakland and put his foot on the neck of his competition. There’s something about his riding style this year that’s kind of a common thing among will-be champions. It’s that straight-forward confident aggression that the alpha male of the pack wears, and you can just see it plain as day with each passing lap.

Now, in reading this far you may assume that I’ve thrown in the towel already after just three races. Ho, ho. There has been, ahem, quite a bit of business going on throughout the pack, especially at last weekend’s epic at Anaheim. Chaos, crashes, takeouts, quad jumps, come-from-behind charges, and surprise holeshot winners pretty much rocked the house last time around. I think the momentum for the series is building at a feverish rate and we are going to see some outstanding racing in Oakland! Nothing is over, but two guys are kicking serious ass right now. Behind them it’s a flash fire. Let’s take a closer look.

I’ve noticed a heightened number of clean jobs in the 250SX Class for the past several seasons. It’s something that has just kind of crept up, and what was once thought a manageable level of aggressive riding is kind of getting gnarly. Now, rough riding has been around forever. Yes, the old Kent Howerton and Bob Hannah days, on through the 1980s, into the nineties with Bradshaw, and into the new millennium with Carmichael. That’s right, Ricky Carmichael. One time I was standing at the fence line at Hangtown when I saw Stephane Roncada block and brake-check RC, and what happened next still makes me raise my eyebrows. Ricky didn’t like being brake-checked so he charged into the next corner in a MotoGP tuck and nailed Roncada so hard it broke his ankle. It was the most gnarly, aggressive racing “move” I’ve ever seen to this day. It was mean.

My point is that rough racing has always been around. But, everything progresses. The bikes are faster, the riders are more skilled, and the take-outs have gotten more frequent and more violent. At least I think so. Where is the line drawn? Is it “boys have at it” like NASCAR? Regardless of your opinion about what happened between Chad Reed and Trey Canard last weekend, maybe that event will somehow spin off and mellow things down a touch? I love block passes, contact, and aggressive riding; however, the clean jobs can and should go away. I’m talking about when you see a rider cutting down from a berm early and you squirt the inside knowing he doesn’t see you, and you smoke both his wheels and send him carting. Anyway, that’s my rant.

Cooper Webb is the guy right now, but Lucas Oil/Troy Lee Designs KTM speedster Jessy Nelson still has a hook in the title chase. He has company, as Monster Energy/Pro Circuit Kawasaki’s Tyler Bowers is tied with him for second, and only a scant 11 points separate Webb from fifth place and pre-season favorite Justin Hill. In the event Webb has a poor night, this thing can hit nuclear status immediately. There has been some awesome racing between the top ten here with more than one grudge match going on. As for Hill, the Red Bull KTM factory rider has been shaking off some cobwebs from a bail and an illness, and he could crack out a huge win at what is kind of his home race. Hill and his brother Josh are from Washington but raced in northern California often. I can’t wait to watch this class this weekend!

It’s tough sledding in this class and we’ve already started to see some attrition take its toll. AutoTrader.com/Toyota/JGR Yamaha’s Weston Peick is out, BTOSports.com KTM’s Justin Brayton is sidelined, and of course we lost Monster Energy Kawasaki’s Wil Hahn in the opening practice of the season. Holeshot artist Mike Alessi is making a race time decision for Oakland as well.

Who do I think is going to win this weekend? Ken Roczen or Trey Canard. As for Canard, the American Honda racer had a nightmare of an evening last time out. He was taken out in his heat race then gated poorly in the main, and we all know how that turned out. There are two things that arrive from a racer of his caliber following that kind of turmoil and they’re both called “revenge.” I’m predicting Canard to get the start this time around, and hopefully Roczen, GEICO Honda’s Eli Tomac, and Red Bull KTM’s Ryan Dungey do too. There is a show we haven’t seen thus far in 2015, and those four have the ability to throw down huge between one another.

Ryan Dungey fans have a very real reason to start getting loud as we approach round four. He’s on it. Beyond there I think American Honda’s Cole Seely and AutoTrader.com/Toyota/JGR Yamaha’s Justin Barcia are riding fast enough to earn their first podiums of the still young season. As for Discount Tire/TwoTwo Motorsports’ Chad Reed, hopefully he can rebound and put in a good main event.

As for my dark horse pick, if you want to call it that, Rockstar Energy Racing Husqvarna’s Jason Anderson is sitting third in points and has had to race through hell to be there. He pulled a great start last weekend but muffed the first timing section and had to enter that awesome dogfight before being taken down. He is fast enough to do the deal if he gets another solid start. He’s put in a hell of a rookie effort so far!

The races have been epic so far and, like I said above, I believe things are building. We’re going to have some good northern Californian dirt this time around, and all the boys will gunning to earn the request of the late great Al Davis. “Just win, baby!” It’s time to go!

Folks, I love being at the races and working hard to help Race Day Live! over at www.supercrosslive.com I always run around the pits and the stands after our practice and qualifying production is finished and love to bench race, so hit me up at andy@racerxonline.com if you want to link up in Oakland.