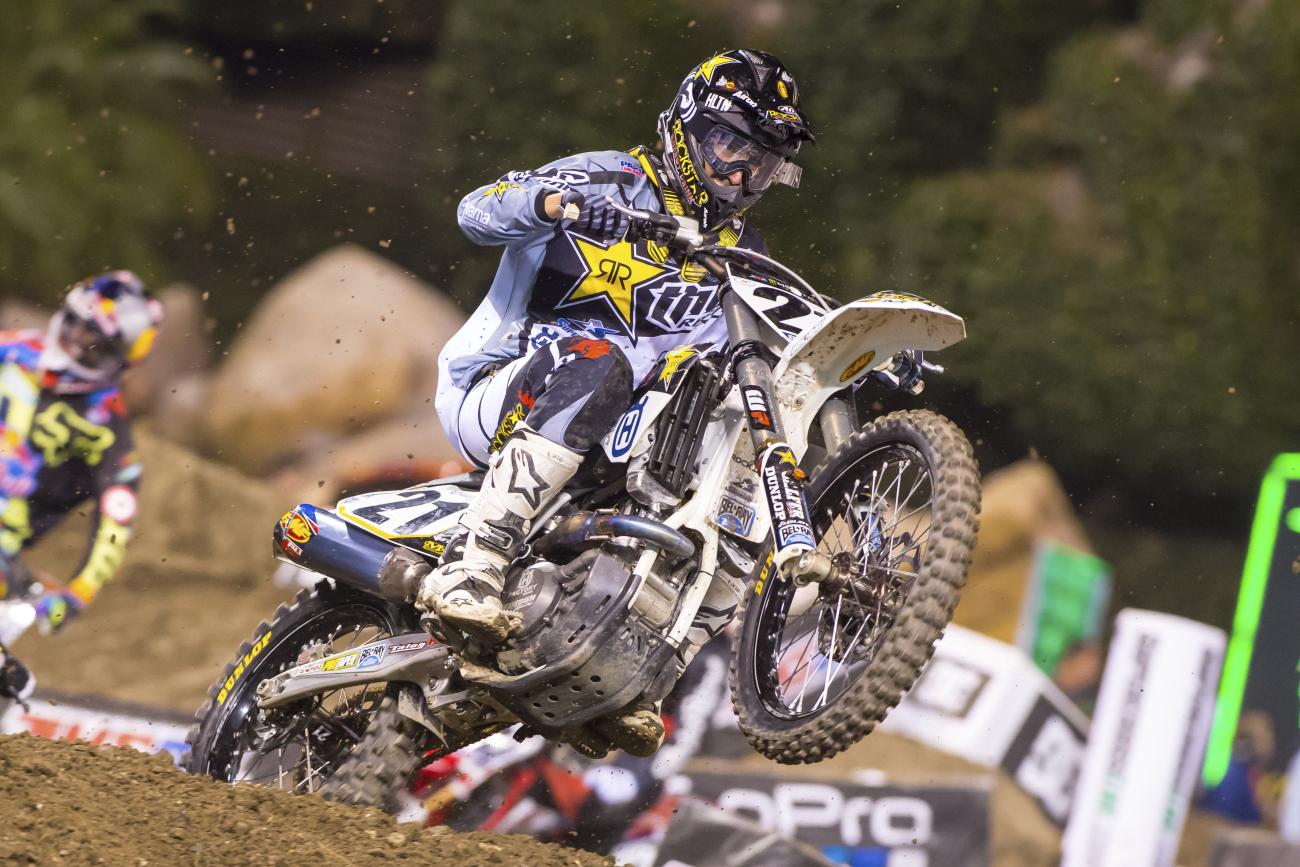 Smartop MotoConcepts’ Mike Alessi may have torn a ligament in his knee late in the main event at A2, according to the team. Alessi landed wrong in a rhythm section while running inside the top ten and had to retire with three laps to go. That’s exceptionally bad timing, because Mikey was riding well and even won his heat race with a pretty good gap. We will update Mike’s status for this weekend as more information becomes available.

Alessi had this to say on Twitter about any possible injury:

Sorry DOC, I have put 2 much into this season 4 it to end like this!!! Season just started so I'm doing what needs 2 be done!! End of story

Privateer Kyle Chisholm made his first 450SX main of the season, finishing thirteenth. “It was nice to get out there & put in some laps with all the guys & see where I'm at,” Chisholm wrote on Twitter after the race. Chisholm’s thirteenth marks his best finish since an eleventh in Vegas last year.

Broc Tickle continues to impress in his return to racing after last year’s huge crash and broken back in Toronto. He finished fifth. “I got a fifth at Indianapolis last year, but this is the third round. I’m super stoked, the class is deep,” the RCH/Soaring Eagle/Jimmy John’s Suzuki rider told our Steve Matthes. “I tried to just let the race come to me. I knew there would be [carnage]. The track was super tough. It was slippery. It didn’t flow that well if you rode too hard. Midway I kind of feel like I dropped off, but at the end I got a second wind, and once I saw Seely there I knew I needed to pick it up, so I did that for two laps, and I think it helped me all the way to the end.”

BTOSports.com KTM’s Andrew Short had a gnarly crash while leading the main event on Saturday. (Check it out below.) Short checked out okay, but said he expects to be sore this week. “It’s not the way you want to end the night,” said Short in a team statement. “I hit the deck hard but I am at least healthy. The team is working hard and will come back to fight another day.” The team was already down one rider, as Justin Brayton left his heat race after going down in the whoops with a possible separated shoulder. “It was tough tonight,” said team manager Forrest Butler. “We are looking forward and will come back stronger next weekend.” We will provide an update on Brayton as more information becomes available.

With Monster Energy Kawasaki’s Wil Hahn out with a broken arm suffered at Anaheim 1, Weston Peick out, and now Alessi and Brayton possibly on the sidelines, the 450 ranks have shrunk in short time. Phil Nicoletti will fill a gate spot for AutoTrader.com/Toyota/JGR Yamaha, but otherwise the door could be open for more privateers to make some main event money.

Jake Weimer started the year with solid rides on his Team Tedder/Monster Energy Kawasaki, but a crash on the third lap left him off the track and in last place. He was also in a precarious spot and has to take some time pulling his bike back up, straightening it, and getting on the track. He fought back from 22nd to 17th at the finish.

Tough night for Chad Reed, obviously, but it wasn’t much better for his Discount Tire/TwoTwo Motorsports teammate Josh Grant. JG had a scary crash near the finish line jump that nearly sent him into the stadium wall at speed—he was able to slow down and merely bump the wall—but the crash was enough to take him out of the race. He did not, as rumors have said, get instructions to pull off from Reed.

Team Honda and HRC had a special guest on hand in 2006 MotoGP World Champion Nicky Hayden, who is now back with the brand after a few seasons with Ducati. “I’m a fan of the sport but also the equipment, so it’s nice to go in the pits and get a little tour to see what’s new and geek out a bit on their technology,” he said in a team statement. “Motorcycle racers speak a similar language, even though I’m on the asphalt and they’re on dirt.”

Unfortunately, Team Honda didn’t have the best night, with Canard involved in those two high-profile crashes with Reed, and Cole Seely also being taken down by Justin Barcia. “I’m not really happy,” said team manager Dan Betley in a team statement. “It was just weird, with strange things happening all day. Trey’s still struggling with starts. We thought we had it handled this week, but obviously we need to keep working on that, maybe with all the riders to some extent. With Trey’s crashes, everybody has his own opinion, but mine is that the first one was a racing incident. They got together, and from there it turned into something that never should have happened. It could have gone really bad because he almost got pushed into the other lane of oncoming traffic. Cole rode better even with his crash, so that’s something he can build off of. Overall, we’ll put this one behind us and keep going forward.”

Early Saturday night, Lucas Oil/Troy Lee Designs KTM’s Jessy Nelson was the odds on favorite to be the first rider to get two wins in 250SX as he jumped out to a sizeable early lead. But around the mid-point of the main event, Nelson made a huge mistake, clipping the over/under bridge and going down. He would rebound to finish sixth, but it was a tough loss. “I would have loved to win another race for the team, but that wasn’t my luck tonight,” said Nelson in a team statement. “I had a good heat race and honestly should have won that main. It’s pretty tough to swallow, but we have to keep our heads up because there is still plenty of racing this season.” For the first time in 2015, Nelson no longer controls the red plate, as he’s down 4 points to Cooper Webb.

Red Bull KTM’s Justin Hill, a pre-season title favorite, made his first podium of the season Saturday. Hill battled a cold all last week, but said he felt better this weekend. “I’m making progress every weekend and getting stronger each race,” said Hill in a team statement. We’ve now heard that Justin had a good sized crash and hit his head not far before Anaheim 1, and that, combined with the illness, has hurt his riding and training time. Through three rounds Hill is still in the title chase, 11 points back of Webb.

Rockstar Energy Racing Husqvarna’s Zach Osborne aggravated a thumb injury sustained at the opening round in his heat race Saturday night. According to the team, he aggravated it while driving into the face of the tunnel jump. Osborne still qualified for the main, finishing fourth on the night. “Tonight I did okay, had a bit of an issue with my thumb in the heat race when my hand kind of blew off the bars,” he said in a team statement. “I came back, iced it, got it as good as I could, and basically just toughed it out in the main. It's a rough situation but it's getting better day-by-day and I feel like we're headed in the right direction for sure.”

Osborne’s teammate Zach Bell also had his troubles in the second of three trips to Anaheim. Bell rolled his ankle in practice after it slipped off the peg, and got ran over. In the main, Bell got together with Josh Hansen and tweaked his front end. He finished nineteenth. “Had a good start in the main event and [Josh] Hansen took me out in the second corner and after that my front end was tweaked pretty bad and I fell again,” said Bell in a team statement. “I'm looking forward to next weekend and showing everyone what I can do. It's hard to do it coming from behind so I'm just really looking forward to the next round."

Rockwell Yamaha rider Nico Izzi was reported to be sick in Phoenix and wasn’t feeling better by the weekend, so he opted to skip A2. He should be back for Oakland.

A week after his first podium of the season, GEICO Honda’s Malcolm Stewart wasn’t able to find the same “intensity” and finished fifth—his second straight top-five performance. “I rode smarter tonight, even when I got frustrated,” he said in a team statement. “The only problem is that I lost a little bit of that intensity in my riding again. Clearly I need to work on finding a better balance."

Matt Bisceglia’s rough start to 2015 got worse Saturday. The second-year pro went down hard in practice and was unable to race that night. "It's a tough deal," said Bisceglia in a team statement. "I really wanted to be out there riding with those guys, trying to make up some ground on them. There's not too much I can do now though but move forward and see what happens Monday." We will update his status as we know more.

Bisceglia had this to say about the crash on Instagram:

Glad I had that @6dhelmets on. Could have possibly been worse without it. I have a second ImPact test I have to take tomorrow to determine Oakland this weekend. As of yesterday my scores were a little bit off, so I had to take it easy for a few days and get back in to test again!

Privateer Michael Leib should be good to go for Oakland this weekend after a crash in practice lead to pain in his left shoulder, which affected him Saturday night. “After some early morning doctor visits, looks like we will be alright for Oakland. Definitely have some pain to push through, but nothing I haven't done before! See you guys in Oakland!” Leib said on Instagram following a sixteenth-place finish at A2.

Monster Energy/Pro Circuit Kawasaki rookie Chris Alldredge was headed toward the best finish of his young career before going for a wild ride in the main event. (Check out the video above.) Alldredge was okay after the crash and said there is still a lot to take away from Saturday. “There are many positives to take from tonight,” said Alldredge in a team statement. “I got great starts tonight and was up front where I know I belong. I made a costly mistake, but I proved to myself that I can run the pace and I believe I had a top-five finish had I stayed off the ground. We’ll look to stay up front for all fifteen laps last week.”