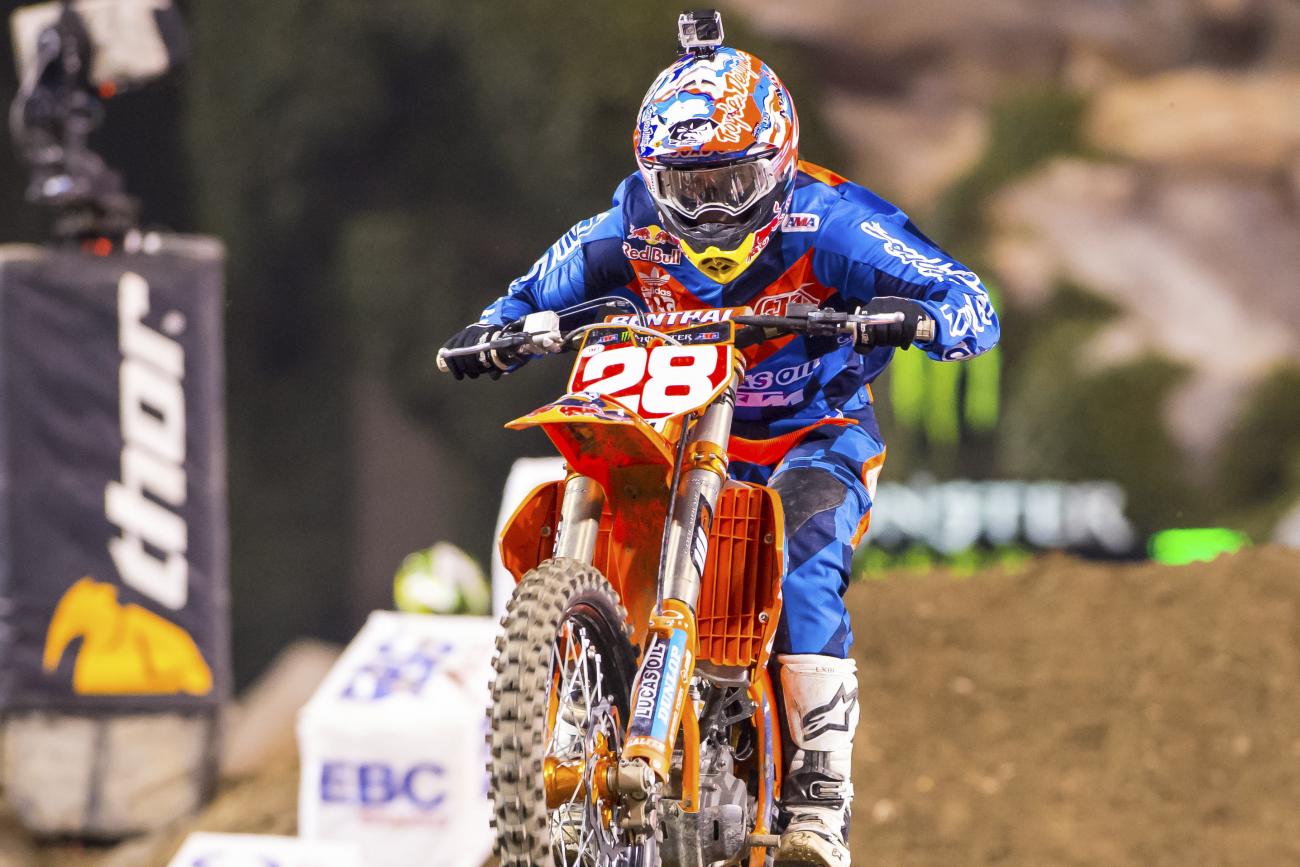 With most circumstances in the 450SX Class—barring injury—the riders can remind themselves that it’s a long series. Even Chad Reed, who had muddled to mere 10-9 finishes in the first two rounds, still felt like he was in title contention until he scored 0 points this weekend.

The 250SX West Region only gets about half as many races, so every move is magnified. Right now Yamalube/Star Racing Yamaha’s Cooper Webb is the hot property, since he’s won two in a row and holds the points lead. When it comes to momentum and math, Cooper is now in control.

It could have looked much different. Early in the race, Lucas Oil/Troy Lee Designs KTM’s Jessy Nelson sped away from the field, much like he did on his way to winning Anaheim 1. Webb had gotten a horrible start and was about last out of the gate, and his chances of straight-up catching Nelson were nil. We now know Webb had the pace to catch Tyler Bowers on the last lap, but Bowers was a few seconds behind Nelson, so it’s doubtful Webb could have gone any further. For six laps, it looked like Nelson, the series’ leader at the time, was about to reestablish himself after a third last week in Phoenix, where he admitted he didn’t have a great night.

Oh, but things change quickly in this game. Nelson had been making his leap over the over-under bridge with great style, but one small bobble on lap seven sent him sideways on the landing, and he hit the Tuff blocks before he could regain control. He’d thrown the lead away.

“I would have loved to win another race for the team, but that wasn’t my luck tonight,” said Nelson in a team statement. “I had a good heat race and honestly should have won that main. It’s pretty tough to swallow, but we have to keep our heads up because there is still plenty of racing this season.”

Indeed there is, but now Webb has huge momentum for these next rounds. Webb charged down the stretch and made a clutch pass on Bowers on the final lap, and the world is abuzz—and Webb’s confidence is soaring—after what was essentially a worst-to-first charge. Had Nelson not crashed, Webb would have ridden the exact same race and finished second, and things would have looked much different.

Nelson got up to sixth and then inherited fifth when Chris Alldredge crashed out. With three laps to go, GEICO Honda’s Malcolm Stewart made a move and pushed Nelson back to sixth. Not the worst night ever, but a big swing in the championship, nonetheless.

In a short series, such incidents are magnified. It’s especially key since many of the young guns of the 250SX Class are new to winning, and handing over any momentum and confidence can loom large. That’s the bad news.

On the good end, all of these young riders are often prone to inconsistency, and several past champions have overcome much worse than sixth to win the title. Nelson knows Webb, Bowers, and the rest of his competitors could have their issues, too. But, when you only have nine rounds, even the small mistakes can look like big ones.