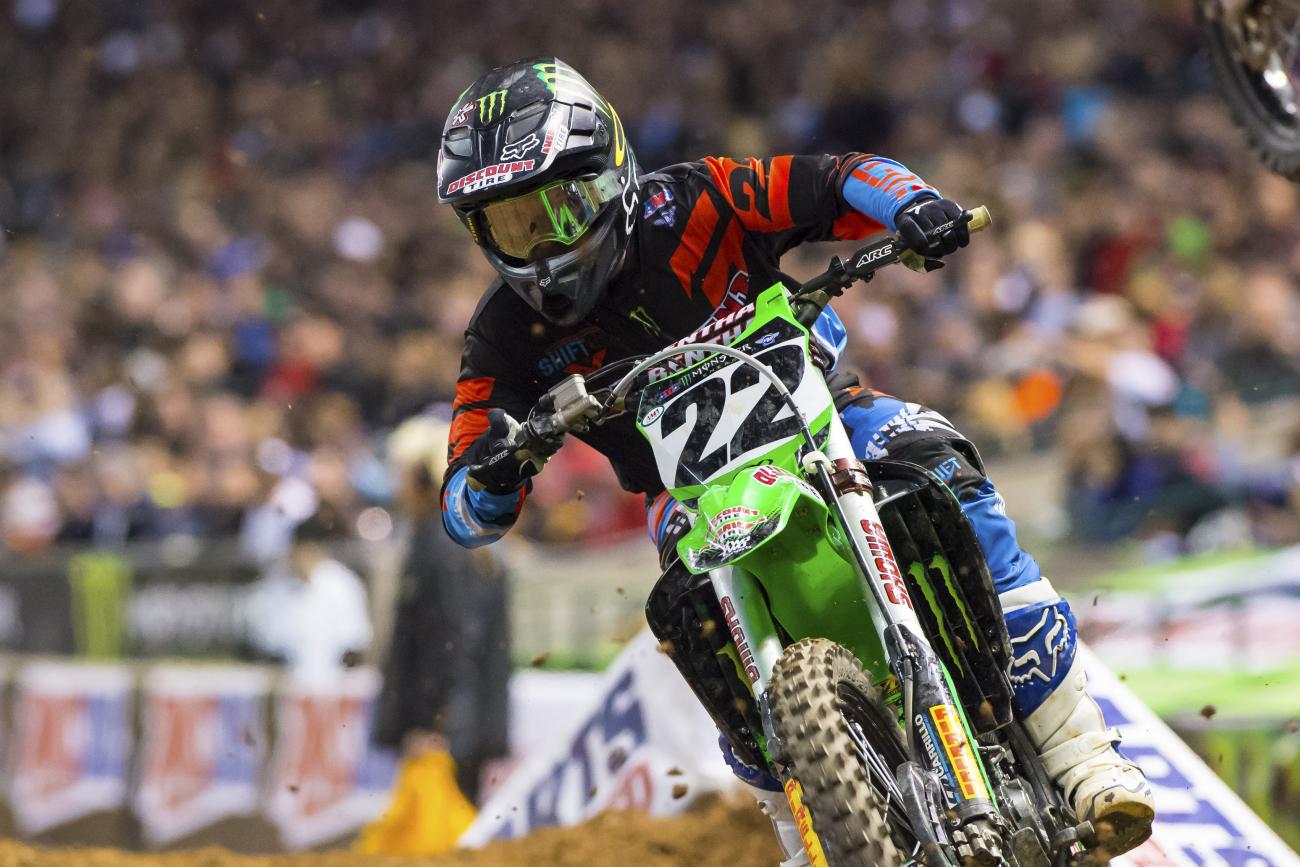 Hello, everyone, and welcome to the Rev Up. We’re taking the fight back to Angel Stadium at Anaheim, California, for round three of the 2015 Monster Energy AMA Supercross, an FIM World Championship. Thus far, it’s been a two-headed monster at the front of the 450 pack, with RCH/Soaring Eagle/Jimmy John’s Suzuki’s Ken Roczen and GEICO Honda’s Eli Tomac being the guys. Throw away Eli’s crash and subsequent twentieth-place finish at the opener, because his other performances have shown his supercross prowess. He has been the fastest qualifier twice, and won last weekend’s main event in Phoenix convincingly. Be that as it may, Tomac remains 21 points behind his rival Roczen.

Meanwhile, the 250SX West Region has been feisty as well, with Lucas Oil/Troy Lee Designs KTM’s Jessy Nelson and Yamalube/Star Racing Yamaha’s Cooper Webb earning the two early victories. Like Tomac in the 450SX Class, Webb has been the fastest qualifier thus far, and is arguably the man to beat in this division.

Anaheim 2 has provided plenty of fireworks in the past. The Thunder crashed down upon “retro night” in 2014 when Discount Tire/Two Two Motorsports’ Chad Reed passed everyone and turned the supercross world upside down. This weekend will mark his 173rd main event, which will tie him for fourth all-time with Jeremy McGrath. The big question is: Can he do it again?

Let’s break down the two classes headed our way this Saturday night and get ready to ring the bell for round three!

Yes, he has posted back-to-back tenth-place finishes, but Chad Reed has a lot more to offer in 2015. His qualifying speeds have been up to par, and he has shown flashes of his old speed in his heat races, especially last weekend in Phoenix. When a racer comes back from injury he has two obstacles to clear: First off, he has to get back into race shape, and secondly, he has to find the confidence it takes to race at that top level again, which may be an uncomfortable level. To beat Roczen and Tomac, Reedy will have to push the envelope. If he starts mid-pack, this will be almost impossible to do, but if he can see the front, or otherwise bangs a holeshot, he can do it. Chad is going to sit down with Jim Holley and I on Race Day Live! on www.supercrosslive.com this Saturday afternoon to talk about his “all-time” milestone and his chances to make history repeat itself.

Through the pack, the guy that continues to impress me the most is Rockstar Energy Racing Husqvarna-mounted Jason Anderson. With the exception of American Honda’s Trey Canard, he was the only man that moved through the field and into the top ten last weekend. “El Hombre” had a get-off in the whoops during qualifying practice, which may have put a dent in his mojo for the evening. I think he is the real deal Holyfield, and I’m looking for him to post his second top-five this weekend.

Like Reed, Canard just needs to start with Kroc and Tomac, and I think he can go to toe to toe with them. Sitting second in the points on the heels of two solid performances is Red Bull KTM’s Ryan Dungey. The #5 hasn’t been dashingly fast, but he is pretty close to finding the groove that can propel him to a victory. Hey, he’s right there to take the reigns if Roczen has trouble (Dungey is only 9 points back). I think he’ll be right there in the hunt this weekend, with an almost-automatic top-five and maybe another podium.

I have to throw out a nod to Team Tedder/Monster Energy Racing’s Jake Weimer for two solid rides, and an effort that shows he isn’t ready to fade away. On the other end of the spectrum, Red Bull KTM’s Dean Wilson needs to show he can put in twenty laps of his true speed. Deano can make it happen—he’s fast, and being fast is enough. And when is the Justin Barcia we expected to see going to arrive? He’s the biggest head-scratcher for me so far.

So, I’m going with Tomac, Canard, and Roczen for my podium, with Chad Reed as my dark horse for a surprise win. After that I see Monster Energy Kawasaki’s Davi Millsaps (not fast enough yet, but could break out), BTOSports.com KTM’s Andrew Short (very solid), American Honda’s Cole Seely (heat race win and ready to surprise), and AutoTrader.com/Toyota/JGR Yamaha stud Weston Peick as your top ten stalwarts.

While Cooper Webb is the fastest guy in this division, the man to keep your eye on is GEICO Honda’s new recruit Malcolm Stewart. Mookie has the speed to match Webb, and they actually have a little rivalry going on for the past two years. If Stewart can stay off the ground (ahem) in his heat race and gate well again, I think he and Webb can put on a show—not to discount Jessy Nelson, who looks just fine with his 6-point lead. Throw in the steadfast speed and determination of Monster Energy/Pro Circuit Kawasaki’s Tyler Bowers and the very, very impressive Yamalube/Star Racing Yamaha rookie, Aaron Plessinger, and we’re in for another impressive show with this group. I’ve been high on that Plessinger kid for a while, and he showed on laps 5-10 last week that can get the job done with some major speed. He’s my dark horse for the win in this class.

I’m going to go with Webb for another win, followed by Bowers and Stewart for the podium.

Back to Anaheim we go, and it’s been a stellar show thus far. This is the most dynamic track we have seen so far, and with the under/over bridge making its return, we are set for another epic Saturday night. Will Roczen and Tomac break away from the stacked field? Can The Thunder turn the racing community upside down again? It’s time to line the gates again, so let’s get the RPMs up into the red and get ready to go racing! Round three, folks!