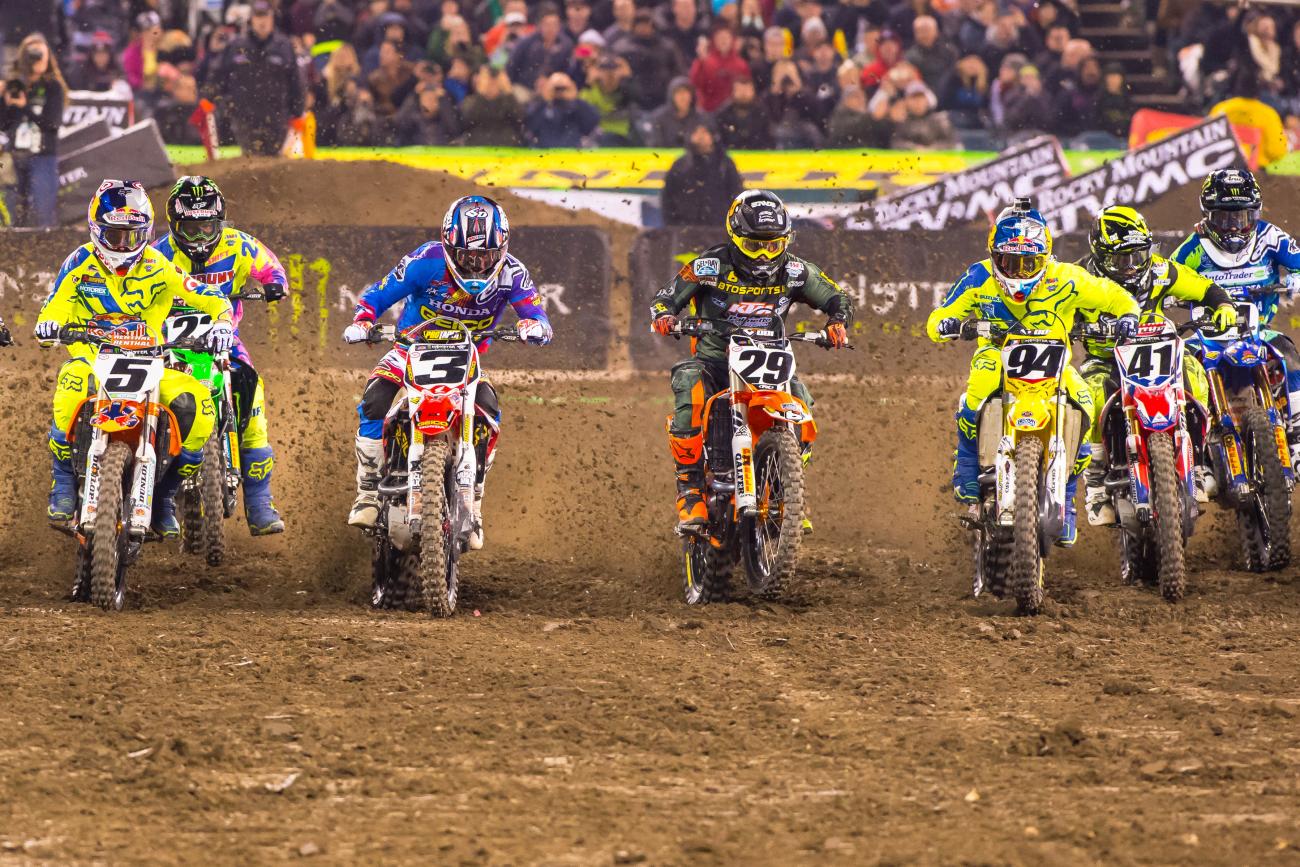 Saturday marked the first time in his 450SX career that Ryan Dungey did not make the podium at the opener—his fourth-place finish was the worst of his career at A1. In four previous seasons, Dungey had an average finish of 2.5 at Anaheim. “I would have liked to be on the podium tonight,” stated Dungey in a team statement. “I am happy to be in the top five. It is definitely not the worst place to start the year, but I have some work to do to improve my position for the next race.”

Although he scored his first podium performance since Phoenix a year ago, all was not well in the Zach Osborne camp following the opener. Osborne sustained a fractured thumb after a crash with Tyler Bowers in his heat race. He rode through the pain to finish second on the night, and told Racer X’s Aaron Hansel he will race this weekend. “I’m going to get it checked out more, but I’ll be there next weekend. I’m 3 points out of the lead—I have to race.”

Following two seasons with GEICO Honda, Zach Bell made his Rockstar Energy Racing Husqvarna debut Saturday night, finishing eleventh. For Bell, who missed eight rounds a year ago with a broken collarbone, the biggest goal Saturday was leaving healthy. He looked pretty quick in practice and might have been a contender, but it didn’t work out. "The night didn't quite go as I planned. I felt fast all day in practice and I was excited for the night,” he said in a team statement. “I came through the pack and rode really well in my heat race. Then in the main I got a decent start but then went down in the sand. All in all I have something to build on and I'm heading into the second round healthy."

It was a rough start to the year for GEICO Honda. Malcolm Stewart, an early season title favorite, was fast in practice but crashed in the main, injuring his wrist. According to the team, it was nothing serious and he’ll be on the gate in Phoenix. Stewart’s teammate, Matt Bisceglia, also crashed in the main and had to settle for thirteenth. "It's the first race of the year, and there were lots of people going for it every lap and trying to pass people at any cost. It got crowded,” he said in a team statement. "I'm frustrated but I can still leave here with a lot of confidence. I had two great starts (in the heat and main) and ran up front in both races. I'm already looking forward to Phoenix.”

Things didn’t fare much better in 450SX for Eli Tomac, who went down twice and finished a disappointing twentieth. "Starts are everything and I thought I was on my way to a holeshot in the main, but a bike came in from the outside and pushed a wave of bikes over,” he said in a team statement. “We all fell into place, but there were a lot of bikes pushing up front and I ended up crashing. I got back up and was making up ground feeling like I could catch up, but I had a bigger crash two laps later and that pretty much ended it for me."

Davi Millsaps, who missed all of 2014 with a knee injury, raced his first Monster Energy Supercross event since Las Vegas in 2013 Saturday. He looked off in practice and his heat race, but he appeared to be turning things around in the main event when he passed Ryan Dungey, and looked ready to battle for a top-five, or even a podium, with Andrew Short and Trey Canard. Then Millsaps, like Tomac, crashed early in the main, and finished nineteenth. “It’s not what we wanted,” said Millsaps in a team statement. “But we finished and there’s nowhere to go but up from here. The opening laps of the main were the best I’ve felt on the bike and I can’t wait to race a full main event feeling that way.”

Motosport.com/GPI/Honda Racing’s Fredrik Noren suffered a gruesome finger injury Saturday in his 450SX debut. (If you really want to see it, you can here.) Noren continued to race after getting the finger stitched, but failed to qualify for the main. He plans on racing this weekend in Phoenix.

Ken Roczen’s first win with RCH/Soaring Eagle/Jimmy John’s Suzuki also marked the team’s first-ever win. “It’s been a long time coming,” commented co-owner Carey Hart. “We’ve been at this eight or nine years and honestly, it’s very bittersweet. I have to give it all up to Mark Johnson, Kyle (Bentley), and the whole technical team. Ivan Tedesco did a ton of pre-season testing for us and that paid off in a big way. Ken put his head down and rode solid from the time the gate dropped. At the same time, Broc Tickle rode an amazing race. That was his first time back after breaking his back last year in Toronto and to get out of here with an eighth-place finish is an important accomplishment for him. I just could not be happier for my crew and all my guys.”

Tickle’s ride was very impressive, but he said he was a bit frustrated with the result. “I’m somewhat frustrated, but as I sit back and think about it, the fact that I haven’t raced in eight months helps keep it in perspective,” he said in a team statement. “I’m actually pretty pumped about it. We’re starting a lot like we did last season.”

Justin Barcia looked out of sorts for most of the day, looking far more ragged than smooth—even more so than usual. He was eighth in qualifying and got shuffled back in his heat race, forcing him into the Semi. Remember, a year ago Barcia passed James Stewart straight up to win his heat. Then he was circulating around tenth for most of the main after a bad start. Finally, he loosened up and rode much, much better in the final ten laps, digging out a sixth-place. Despite the apparent struggles, his new Toyota/JGR Yamaha team wasn’t worried; in fact they barely made any bike changes at all during the day. They’re chalking this one up to nerves.

Yamaha is flooding the 250SX gate with the blue this year, with not only the official factory outfit of Yamalube/Star Racing Yamaha, but teams like Barn Pros/Home Depot Yamaha, Strikt Slaton Yamaha, Rockwell Watches, and the 51Fifty Energy Drink squad. Decent group of privateers on YZ250Fs, too. All told, ten of the twenty-two bikes in the main event were Yamahas.

Of course, Yamaha and specifically Star Racing would have liked to park a YZF on the podium, but just because they didn’t doesn’t mean their riders aren’t capable. Aaron Plessinger’s fifth was extremely impressive. He looked relaxed and calm like a veteran even though it was his first-ever supercross race. Perhaps experience in Ricky Carmichael’s Road to SX and the Monster Energy Cup Amateur All-Stars helped? His teammate Cooper Webb looked as fast as anyone but had a crash. He came back for seventh—don’t worry, Mini Coop will be a contender this year.

We’re really feeling bad for Darryn Durham. After several crash-and-injury filled years, he’s got a fresh start on the Lucas Oil/Troy Lee Designs KTM team, but he suffered through more big crashes in both his heat and the main on Saturday. Durham jammed his wrist in one crash, but he should be good to go in Phoenix. He was battered but not broken, and finished twenty-first in the main. He really needs to catch a break sometime soon.

The 250 LCQ was crazy, with South America’s Jean Carlos Ramos—who has very impressive supercross style—holding the final transfer spot late. Then a big crash with Ryan Breece in the typical battle for the last spot knocked them both out of transfer position. In their place came Johnny Jelderda, who finished fourth…but was then penalized two spots for going roll-double on a triple jump while the red “no jumping” light was on. This put Breece, who finished fifth, back into fourth, and into the main event. Breece took advantage to take eighteenth in the main.

A ridiculous twenty factory riders made the 450SX main—hmmm, maybe it’s not as hard to find a ride these days as we thought. If Wil Hahn hadn’t crashed out in practice, there might have only been one spot at the table for a privateer. So congrats to Rocky Mountain ATV/MC’s Kyle Partridge and Team 3BR’s Tevin Tapia for making the cut. Capable hands like Nick Schmidt, Ronnie Stewart, Cody Gilmore, Cade Clason, AJ Catanzaro, Nick Wey, Matt Moss, Jimmy Alberston, and Adam Enticknap all showed speed throughout the day but didn’t make it to the main. These early rounds are going to be tough!