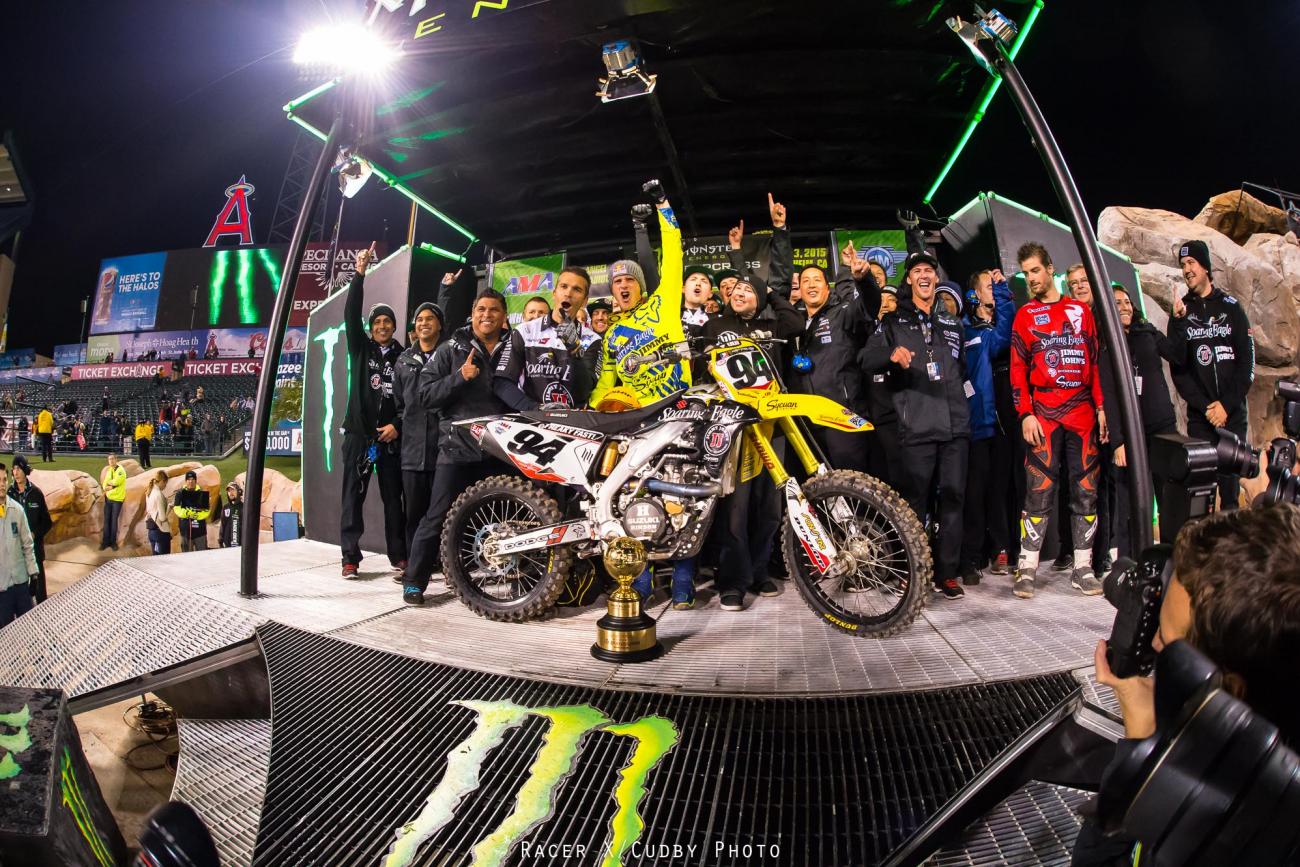 We’ve chanted the mantra “Don’t read too much into the first round” over and over and we’re going to say it again here. We don’t actually know if it applies this time, but if you still want to believe parity and unpredictability will be a theme this year, you’d better hope the opener was not an indicator of the season. The racing was…just not that exciting. The track was simple and the starts dictated most of the finishes. Plus, most riders were dealing with the standard opening night jitters and weren’t riding like they expect to. So, yes, honestly it was follow-the-leader stuff in both main events, but there’s a chance that’s not the way of the future. The opener can be different, right?

That said, damn Ken Roczen looked solid. He was hovering near the top of the lap charts every time he was out there in practice, and as soon as he nailed a good start in the main event it’s pretty obvious what would come next. He led every lap en route to his second-straight Anaheim 1 victory. It was also the first ever win for his Soaring Eagle/Jimmy John’s RCH Suzuki team.

Second was a surprise. Instead of one of the picks from the standard contenders list, Rockstar Energy Racing’s Jason Anderson made his maiden 450SX voyage a good one. Not bad for a rookie. Again, the good start helped, and he stayed in touch with Roczen for most of the main. Score another one for the Aldon Baker program, as Roczen and Anderson are both trained by him, and spend most of their time together. What’s most interesting is that pressure and nerves lock up a lot of new kids in their first race, but Anderson said he’s never felt so relaxed before a race. This is Husqvarna’s first podium in the big class since 1976.

The hero of the night? Maybe BTOSports.com’s Andrew Short, who won the first 450 heat race of the year, holding his buddy Roczen off in a battle to the finish. Then he gated well again in the main, stealing the lead away from Mike Alessi. Shorty put up a great fight with Trey Canard and Ryan Dungey, and eventually went back to fifth. Great riding from Shorty.

What about the rest of the expected title contenders? Canard was plenty fast and did a good job making a few key passes. He ended up third. Nothing wrong with Trey’s ride at all. Dungey was fourth on his Red Bull KTM. He was quiet for most of the day, but looked solid in the main. Passing is often a problem for Dungey, though, and it was again this time as it took him forever to get around Short. By the time he was through, Roczen Anderson and Canard were long gone.

The race was a disaster for some others. GEICO Honda’s Eli Tomac was really fast during the day, taking the fastest qualifying time and then winning his heat to collect the first gate pick. He was trying to maneuver past some riders on the first lap while running about fifth, clipped a tough block and went down. A few laps later he was down again. "Great day that just didn't finish as we had hoped," said Tomac, who easily won his heat race to earn the top gate pick for the main. "The GEICO Honda was so good and the riding was effortless. It was just some bad racing luck in the main that cost us a top finish. Starts are everything and I thought I was on my way to a holeshot in the main, but a bike came in from the outside and pushed a wave of bikes over. We all fell into place, but there were a lot of bikes pushing up front and I ended up crashing. I got back up and was making up ground feeling like I could catch up, but I had a bigger crash two laps later and that pretty much ended it for me." Tomac finished 20th.

Davi Millsaps had his issues in his Monster Energy Kawasaki debut, never showing too much blazing speed in practice. He still could have salvaged a decent main event finish though until an off-track excursion while battling for the top five, and then a crash. He finished 19th.

Discount Tire/TwoTwo Motorsports’ Chad Reed mentioned having undisclosed issues on his Twitter account. He salvaged 10th in the 450 main.

It looked like it was going to be a bad one for new AutoTrader/Toyota/JGR Yamaha rider Justin Barcia, who hovered around tenth for most of the race. His fitness kicked in late, though, and he started making moves to salvage some points. He ended up sixth after passing his teammate Weston Peick on the last lap. Sixth looks a whole lot better than it could have been, but overall not an awesome night for Barcia.

Raise your hand if you predicted Cole Seely going to the LCQ. Nobody? Neither did we, but that’s what happened. Afterward in the pits Seely said he felt like he had a black cloud following him around all day, and it followed him into the main when he collided with Davi Millsaps as Millsaps himself was going down in the sand section. “I felt bad for running into the side of him but I had nowhere to go,” Seely explained later in the pits.

The 250 West Championship is up for grabs and Lucas Oil Troy Lee KTM’s Jessy Nelson has made a move for it. He holeshot and checked out to lead every lap and win his first supercross. Again, not much passing going on out there.

Rockstar Energy Husqvarna’s Zach Osborne could of had a terrible night as he crashed in his heat race and hurt his thumb. Osborne and Tyler Bowers exchanged several block passes for the lead, with the final blow being landed by Bowers, sending Osborne off the track and into an oncoming lane. Fortunately the lane was empty. Osborne gutted out a win in the LCQ and a second in the main. After getting his hand wrapped up at the Asterisk Medical rig, he told us he plans on racing next week in Phoenix despite his fractured thumb.

Tyler Bowers was a solid third on his Monster Energy/Pro Circuit Kawasaki, but his rookie teammate Chris Alldredge had a bunch of crashes and didn’t make the main.

Justin Hill, like his 450 teammate Wilson, said he just didn’t ride like he expected—the opener is weird, folks. At one point he got around Bowers for third but then he tightened up and that was it, he finished fourth. Afterward he admitted that he felt off all night, even in his heat race, which he won handily over Josh Hansen.

Yamalube/Star Racing Yamaha didn’t have the results they wanted but their guys rode well. Cooper Webb crashed and came back through for a points-salvaging sixth. And rookie Aaron Plessinger, in his first supercross, was very fast and took fifth.

Rough night for GEICO Honda, as both Malcolm Stewart and Matt Bisceglia were up front off the start but both went down. Bisceglia fought back to 13th, but Stewart tweaked his wrist and did not finish. According to a team statement, the wrist isn’t that bad and Stewart will be back for round two.

Up and down day for Josh Hansen, who made his first appearance in a main event since St. Louis in 2012. He had some bike problems that prevented him from going out for the second timed qualifying session and he tightened up almost immediately in the main. “I was my own worst enemy after that,” Hansen said. “I was just blocking and being an idiot out there, I was just another dude.” His problems got worse when he got bumped by Shane McElrath and went off the track, relegating him to ninth place. Still, Hansen led some laps in his heat and started up front in the main.

Weird moment for Alex Martin in his heat race. Thinking his holeshot device was stuck on when in reality his air forks had blown out, Martin somehow continued to race and placed fourth in his heat race! Said Martin after the race, “It cornered phenomenal, but everywhere else it was sketchy.” Martin rode well in the main and finished eighth on his CycleTrader.com/Rock River Yamaha.