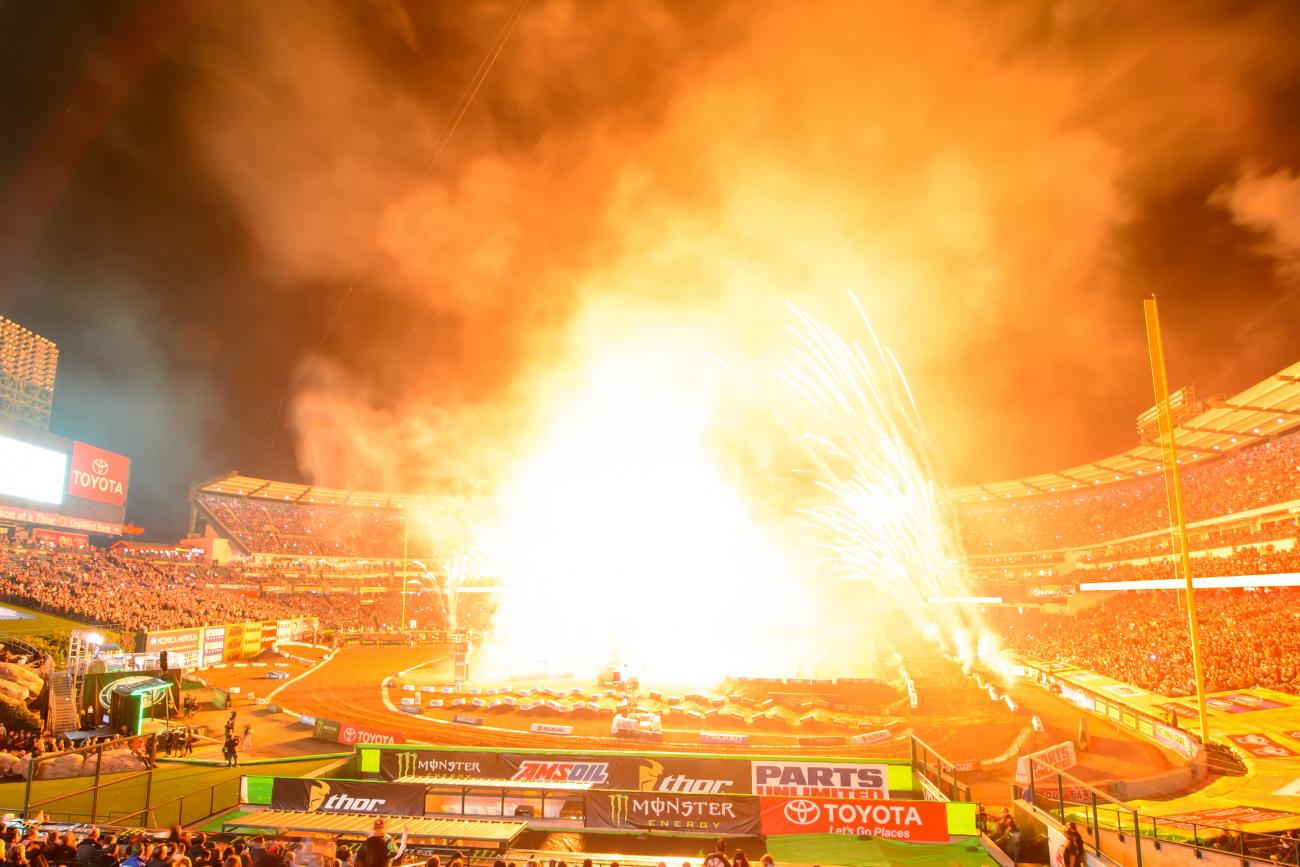 All is good in the world before Anaheim 1. Before Monster Energy Supercross begins, everyone is a contender, everyone believes, and everyone has hope. While the year won't work out as planned for everyone, it's certainly going to be fun to watch the stories unfold—stories like the battle for the 450SX title, and smaller ones like young kids trying to build a career. It's all on the table starting this Saturday, and the only way to make sense of all is to start listing all the reasons we'll be watching. You should, too.

The powerful PC squad hasn’t won a 250SX Regional title since 2011 with Broc Tickle. Mitch can’t be a happy camper.

For the first time in his professional career, Justin Barcia will be on a brand other than Honda. How will it work out?

His second title is within reach. Can he grab it in 2015?

Put his 2014 Lucas Oil Pro Motocross tour with RCH/Soaring Eagle Suzuki in the background. For the first time in his career, Weston Peick will begin a season with factory equipment.

Another European tries to stake a claim in America. The Swiss rider will race 250SX East for Monster Energy/Pro Circuit Kawasaki. Can he handle supercross?

It’s been a long time since Ricky carried the torch to the top for the Red Riders. By all appearances, Honda is going all-in this year. Can Canard, Tomac, or Seely deliver?

11) Big Bore rookies out to take it all

Josh Hansen is once again saying this is his last, best chance, and he’s working harder than ever. He’s said this before, and it nearly led to a West Region 250SX title…all the way back in 2011. He hasn’t raced Monster Energy Supercross since March 31, 2012 in Houston. What will he bring to the table?

Nico Izzi is trying to revitalize his career in 2015. The last time we saw him in Monster Energy Supercross was 2012. What should we expect?

14) Ken Roczen Moves back to Suzuki

How will the biggest move of the off-season pan out?

Related to above: Is a team once known for top-privateer status and pit parties ready to become the best of the best?

Hahn has been out since March with some big injuries, but returns Saturday night.

17) Tyler Bowers back in SX

Remember, the four-time Amsoil Arenacross Champion began his career in Monster Energy Supercross (2008) and has a 250SX win to his credit.

18) Can Davalos finally win a title?

He got the race-win monkey off his back last year. Will he do the same with the title this year?

Who will fill his shoes at PC?

After eleven years with Honda, TLD will be orange in 2015 and beyond.

The surprise of the early 2014 season wants to bang bars with the elite pack again.

22) Chad Reed has a teammate for the first time

Will Josh Grant relieve some of the pressure on Reed?

Will they be turning privateers away from MTF and GPF the week in between?

24) there are Two new venues

Petco Park (rather than Qualcomm) in San Diego, CA and Levi's Stadium in Santa Clara, CA.

The supercross gods will give us better weather the second time around, right?

26) Who will capitalize the most in RV's absence?

Your guess is as good as ours.

Yes. The storied brand is back, under the same tent that once flew Rockstar Suzuki and Rockstar KTM colors. The white bikes will be contenders right from the start.

29) Justin Hill is On Orange

After two years at Monster Energy/Pro Circuit Kawasaki, the younger Hill is headed to Red Bull KTM. Is this his year?

For the first time in history, Monster Energy Supercross will get live network coverage of a supercross (the East Rutherford race airs on Fox, not the Fox Sports 1 cable channel). And it’s a day race!

31) Seventeen Rounds Are Live on TV

Age is just a number, right?

33) Canard is on KYB suspension

He was so hot (like Hansel hot) down the stretch in Lucas Oil Pro Motocross and again at the Monster Energy Cup. Will it continue?

34) Will this finally be Marvin Musquin's year to win a US title?

It’s now or never as this could be his last year in 250SX.

Another go round, but is it the last?

36) Mookie gets a shot with GEICO Honda

Can he do well enough to get a 450 gig for the summer?

We can easily count more than twenty-two riders who should routinely make the 450 field. So who will miss?

His beautiful summer with Team Honda results in some back door CRF support, siphoned to the MotoSport.com/GPI Honda team (known as Crossland Racing in 2014). But can Freddy do supercross?

39) Tommy Hahn Comes out of retirement

The elder Hahn has been around the block. He raced the 125 class in his first year!

For the first time since 2012, we will see Metty on the line at Monster Energy Supercross.

41) Will Andrew Short ever not be competitive?

Several privateers made a name for themselves in 2014, like Ronnie Stewart, Nick Schmidt, Cody Gilmore, and Seven-Deuce Deuce Adam Enticknap. Can they keep rolling in 2015?

43) Matt Lemoine looks for another podium

A sleeper in the East Region. Mark our words.

He’s back with SmarTop/MotoConcepts, but will we see a repeat performance in 250SX East Region?

Are we seeing the end of an era, or does Alessi still rule the starts?

Injuries thwarted his progress, but he’s back and ready with Pro Circuit power.

The GEICO Honda team sets a high standard; we’ll see if he can reach it.

Hasn’t happened yet. Will a team switch help?

Zacho has been around awhile—this year is a must win.

50) Jessy Nelson could be the breakout star

Not a flashy rookie season, but he gets another shot with Lucas Oil/TLD KTM.

52) Can Ken Roczen go the distance?

Ken Roczen is usually stronger in the first half of championship—can he maintain the pace all the way to the end this time?

53) Will Jeremy Martin qualify for the first race?

He didn’t the last two years running. It can’t happen three years in a row, can it?

54) Broc Tickle back with RCH

He’s been out since Toronto with injury. Can he make a quick return to form?

It came together late, but Josh Hill returns to Yamaha for 2015.

It’s been a tough stretch for Double D, but remember this guy is a former race winner.

Skills are there, but what about confidence?

Pretty much everything about Eli’s first 450SX season sucked. Year two will not.

Will we see James at the races at all?

Several bumps in the road the last few years for the multi-time 250SX race winner. Will his talent shine through in his first 450 foray?

61) Can Baggett Pull it Off Indoors?

The gritty veteran could be a prime candidate if a factory spot opens up.

63) Can Reed be consistent?

Reedy hasn’t made all the races since 2011—is he now injury prone or just unlucky?

Anthony Rodriguez showed dazzling speed his rookie year, but couldn’t stay healthy. Will anything change in 2015?

Barcia, Tomac, Canard, Millsaps, Reed, Dungey and Roczen all have a shot. Who will fill RV’s shoes?

Will the elder Martin shine out west?

Her quest to become the first women to qualify for a supercross main event starts in Arlington.

Justin Bogle ruled the East Region a season ago; will it happen again?