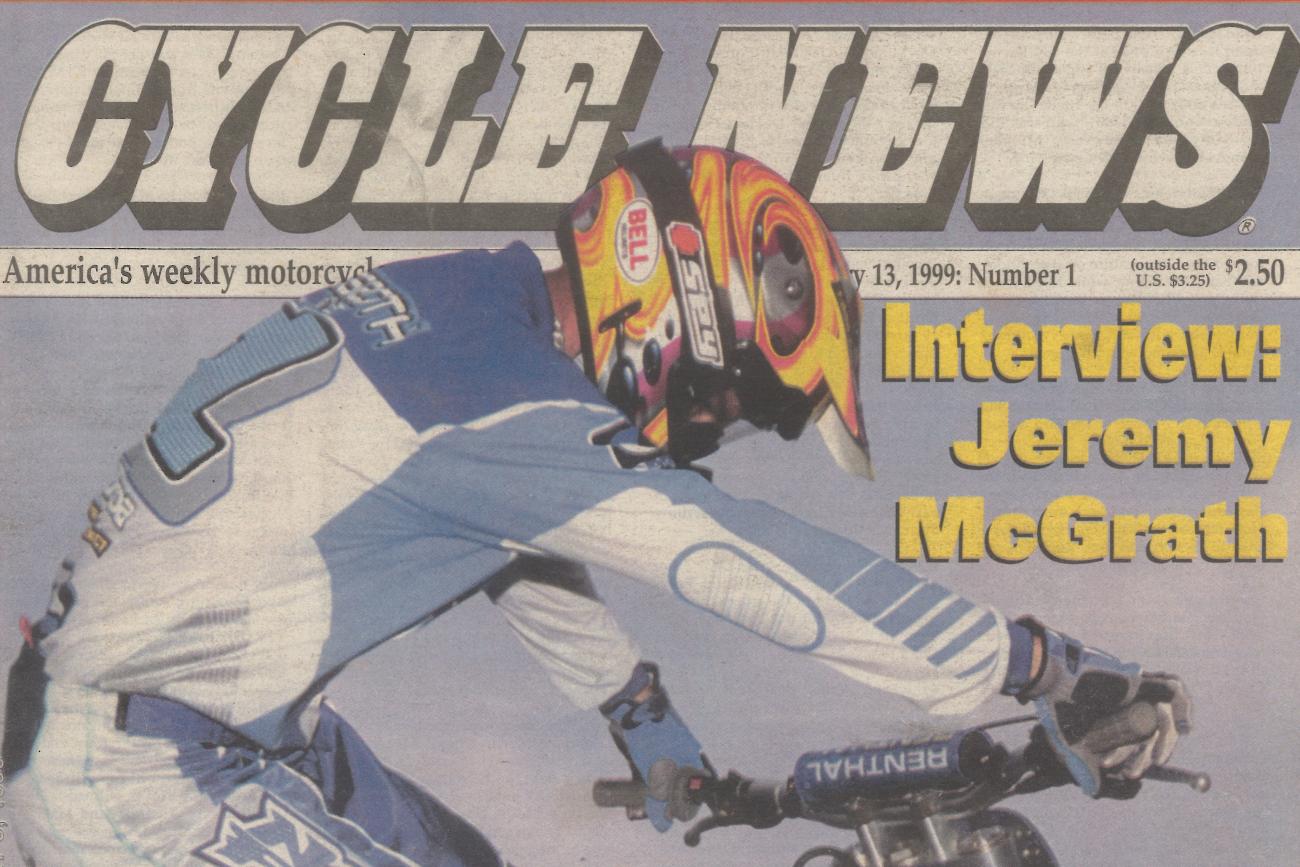 Racer X Online is counting down the days until the January 3 drop of the starting gate at Anaheim 1 and the 2015 Monster Energy AMA Supercross Championship. We are looking at each of the forty years in the history of the series, with photos, video links, old covers, and more. Today we reach the last season of the last millennium, 1999. It was called the Toyota Trucks/Parts Unlimited AMA Supercross Series.

Jeremy McGrath, now riding a Chaparral Yamaha, didn’t need to change much from his remarkable return to the top in 1998—other than his riding gear, anyway. He left Fox Racing for No Fear. His Randy Lawrence-tuned YZ250 was a superb motorcycle, and the two made a lethal combo. He also decided at this point to be a supercross-only rider, feeling that he had earned the right (and he certainly had).

Honda wanted the AMA Supercross Championship back more than anyone. They practically owned it from 1982 through ’96, save for Kawasaki’s Jeff Ward winning twice in the eighties. McGrath’s departure in December 1996 had been acrimonious, and now that he was winning again on a Yamaha, the Red Riders went shopping for the best talent money could buy. With Ezra Lusk already on board, they added Kevin Windham from Yamaha, Mickael Pichon from Suzuki, and Sebastien Tortelli from France (and Kawasaki) for a broad attack. And for good measure they had “Iron” Mike LaRocco, who was riding as a one-man team with Amsoil/Factory Connection—what would ultimately become the GEICO Honda team LaRocco now manages.

Kawasaki still had 1997 champ Jeff Emig, but he was nowhere near the rider he was just two years earlier, with a career somewhat derailed following his erratic 1998 season. It would get worse in 1999. Kawasaki also had Damon Huffman, who showed great promise in the 125 class, but their future was obviously going to be Ricky Carmichael. Already a two-time 125 National Motocross Champion and undefeated in the 125 East in 1998, Carmichael wanted to move up as soon as possible to the premier 250SX Class, and Kawasaki relented: RC would ride a 250 in the stadiums and do one more summer on 125s.

At the first race of 1999, at what was then called Edison Field at Anaheim (now back on the schedule after a couple years of reconstruction), Honda’s plan looked brilliant. They swept the top four positions—Lusk, Pichon, LaRocco, and Windham, respectively—while McGrath finished seventh (ironically, one spot behind 250-class debutante Carmichael). It was his first loss in six visits to Anaheim. Here’s the first race.

It’s a great watch too, because you will see the first-ever MC-versus-RC battle—this was the first time they ever raced together. Watch them come together and tangle right past the 9:15 mark.

(The races were on ESPN2, and I was lucky enough to be invited to be the pit reporter on a few shows, with Art Eckman and David Bailey doing the real work in the broadcast booth—I can’t tell you how great those two were to work with, and what a privilege it was to get to just hang out with them and bench race about moto, life, and all things in between.)

Lusk won the second race at San Diego as well, and LaRocco again finished third. But this time McGrath was up to second and Carmichael crashed hard—the one and only time in his AMA Supercross career that he would crash hard enough to injure himself and miss some races. RC was working with Johnny O’Mara as his coach, but he had yet to meet Aldon Baker and become the man who would be king.

Yamaha of Troy’s Casey Johnson and Casey Lytle would go 1-2 in the 125 class at both Anaheim and San Diego, but in Phoenix, Pro Circuit Kawasaki’s Nathan Ramsey would get in there for the win ahead of Johnson and Suzuki rider Michael Brandes.

McGrath got it rolling in Phoenix’s Bank One Ballpark, just as things started falling apart for Lusk. McGrath took the win over Pichon and LaRocco (who had three straight thirds) while Ezra crash a few times and only got a sixteenth-place finish. McGrath was now the points leader, one point ahead of LaRocco and Pichon. Lusk had fallen back to fourth.

Here’s a cool side note: The winner of the KTM Junior Supercross Challenge at Phoenix 1999 was none other than Taylor Robert, now the factory FMF KTM off-road star.

The next round was at the Seattle Kingdome (which was soon to be demolished), and it was probably the biggest surprise of the season to see hometown favorite Larry Ward win there again, nearly ten years after winning there as a rookie in 1990. The biggest crowd in the dome’s SX history (60,193) watched Ward lead pretty much the whole way. His win marked the biggest gap between first and last wins in SX (though that would change a few years later with LaRocco’s last win, who coincidentally finished second on this night). McGrath, who crashed in the first turn, charged all the way up to fourth. The points leader was now LaRocco.

Anaheim held a second race in 1999, the fifth round of the series, and it was once again Ezra Lusk who rose to the occasion, beating McGrath again in “The House that Jeremy Built,” which led Cycle News to call Lusk “Mr. Anaheim” on its cover. Jimmy Button finished third while riding a Yamaha factory YZ400 that Doug Henry would have been using had he not decided to not race SX that season.

The 125 class saw the end of Casey Johnson’s title hopes when he came up short on a triple and was landed on by Rusty Holland, leaving the points leader with a broken upper arm. Nathan Ramsey won again on the Splitfire/Pro Circuit Kawasaki. Here’s the whole show.

The next round of the series was in Tampa, and it saw the beginning of the 125 East Region, and with it came a few first-evers: Ernesto Fonseca, riding his first pro SX race, won on his Yamaha of Troy YZ125. It was the first-ever win for a racer from Costa Rica, and Ernesto would keep rolling for three more races, giving him a career start of 4-0. That’s never been done before or since in AMA Supercross.

It was also the fourth 250 class winner in six rounds, as Kevin Windham stepped up and got his first win for Honda. McGrath, who led eighteen laps, ended up second, and Lusk third. The returned Ricky Carmichael put in his best performance yet with fourth. (I couldn’t find the whole video for this race, but here’s the brutal Greg Albertyn crash from his heat race.)

Atlanta’s Georgia Dome was next and McGrath finally got his second win of the season. Yamaha’s John Dowd was a solid second and Larry Ward (who by now lived in South Carolina) had another good local finish with third. Here’s the whole program.

Everyone’s worst fears started taking shape in Daytona when McGrath got rolling, winning again at the track people used to think he would not do well on because it was more like the outdoors than any other track. But McGrath was just solid at Daytona, winning it three times in the nineties. At one point he was twenty-five seconds ahead of runner-up Windham, with LaRocco third. Lusk crashed with Dowd on the second lap and laid motionless on the track—he was out cold and did not finish the thirty-rider main event. By this point in the series Jeremy was 32 points ahead of everyone. Here’s the main event from Daytona ’99.

McGrath’s next win came the next weekend at the Houston Astrodome, which was featured on ABC’s Wide World of Sports. The #1 Yamaha followed the #14 Honda of Windham for half the race; then Jeremy went right on by and kept going.

Here’s an interesting side note: Planet Honda-sponsored Nikki Harris and Kawasaki of Mexico’s Tania Satchwell both entered the race in the 125 class in the hopes of making it into the night program. Neither came anywhere close to qualifying in the afternoon heat races or LCQ.

Next came the Metrodome in Minneapolis, and Jeremy McGrath once again came away the winner—this time he passed Ricky Carmichael and Robbie Reynard on the first lap. Here’s the main.

Watch the 4:10 mark when Carmichael crashes when Tortelli comes too far inside. It was just one of Ricky’s many epic crashes in 1999.

McGrath made it four in a row at the Trans World Dome in St. Louis, topping LaRocco and Pichon as the series started winding down. And this race would have been memorable for KTM in that Kelly Smith led the 125 class main event for fourteen and a half laps, only to have Ernesto Fonseca run him down and then literally land on him, knocking Smith out of a chance to become the first KTM rider to ever win an AMA Supercross main event. Incredibly, Smith would later become both the first KTM rider to win an outdoor national and the first to win an AMA Arenacross main!

McGrath won again at Pontiac, which was no big surprise—at this point he was as dominant as he had ever been at any other point in his epic career. The big surprise was that Ernesto Fonseca did not win—he lost for the first time in his career! The winner instead was FMF Honda rider Brock Sellards.

The New Orleans Superdome was the next race, and while Ezra Lusk finally got back on track with a win, McGrath was able to clinch his sixth AMA Supercross Championship in seven years by finishing second. And Yamaha of Troy’s Fonseca clinched the 125 East Region title with yet another win. Here’s the 250 main event.

Lusk won again at the RCA Dome in Indianapolis, which meant that he swept the three races that were part of the Vans Triple Crown—Anaheim 1, Houston, and Indy—so he won a $25,000 bonus. Pichon finished second while Tim Ferry, a full-on privateer in 1999, finished a season-best third. Fonseca won the 125 race again, giving him six wins in seven starts as a rookie!

The series ended in Las Vegas with yet another McGrath win, giving him eight for the season. Lusk finished second, which was no surprise. But here’s the shocker: Jeff Emig finished third, marking not only his first podium of the season, but Kawasaki’s first podium in the 250 class as well.

No one knew it at the moment, but the 1999 Las Vegas Supercross would be the last AMA SX race of Emig’s career. Later that summer he would lose his job with Kawasaki after getting arrested at Lake Havasu after partying. He would come back on an FMF Yamaha and shock everyone with a win at the US Open, but then he broke his wrists on New Year’s Eve while practicing for Anaheim 2000, and then he broke his back and leg while getting ready for the start of the outdoor nationals, forcing the Hall of Famer to retire from professional racing. Emig is now the voice of Monster Energy AMA Supercross, along with Ralph Shaheen.

The 125 East/West Shootout at Vegas was won by Nathan Ramsey, who barely qualified through the LCQ to get into the main event. Tyler Evans finished second and Nick Wey third.

And finally, the end of Ricky Carmichael’s rough rookie 250 season can be seen in this short clip from Las Vegas, voiced by The Racer X Show’s Greg White.

How interesting is this: Carmichael finished the 1999 season ranked sixteenth in the standings, a single point behind his teammate Jeff Emig (116 to 115).