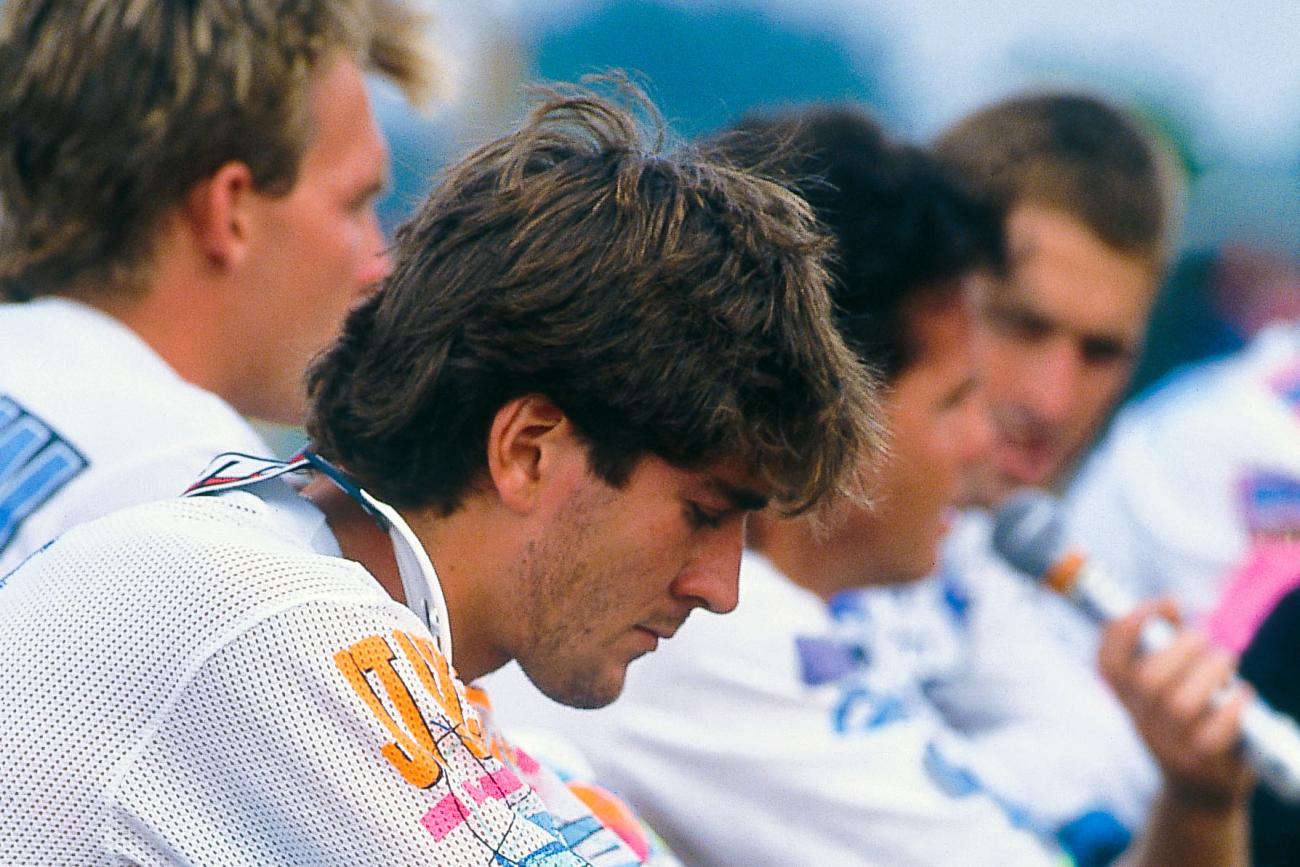 Today we reach the pivotal 1991 AMA Supercross Championship in our forty-day countdown to the Anaheim Supercross opener at Angel Stadium, January 3, 2015. Each day we present the highlights, lowlights, and back-story of each season. Yesterday saw a repeat of Jeff Stanton as the series champion, but the rise of a pair of younger talents, Yamaha’s Damon Bradshaw and Stanton’s Honda teammate Jean-Michel Bayle.

By 1991, Bayle had been in the US for a full season. An early elbow injury likely cost him a good shot at the AMA Supercross Championship, though he still managed to finish second overall. He rode a CR125 outdoors, and he seemed to have that title in the bag—he had a 74-point lead after nine rounds—until he broke his arm in the whoops at Washougal.

Most still considered Stanton to be the favorite because of his solid consistency, broad skills, and sheer work ethic. Bayle was much more laidback in his training approach, relying on sheer talent more than hours in the gym or out on the practice track. He and Stanton were starting to rub each other the wrong way, especially since it was soon obvious that Rick Johnson, the team captain since David Bailey’s accident in 1987, was not the rider he used to be—his chronic wrist injuries would soon lead to his forced retirement. Stanton, already a two-time 250 Motocross Champion as well, was not happy hearing all of the experts say that 1991 would be “the year of the Frenchman.”

There was more harmony between the promoters too. So much so that the schedule was expanded again, this time to eighteen races! That started to catch the ire of the factory teams, who weren’t budgeted to do eighteen supercross rounds and (at the time) thirteen outdoor nationals. Kawasaki’s Roy Turner (likely speaking for all of the OEMs) was the one who finally told the AMA that they had to cap the series, and that seventeen SX races and twelve nationals were the magic numbers. A change would soon be in the works.

The 1991 AMA Camel Supercross Series got underway in Orlando of all places, a nod to Florida promoter Bill West. There was a new team lining up for the first time focused entirely on the 125 class. California hop-up shop Pro Circuit, founded by former desert racer Mitch Payton, rolled into the Citrus Bowl with a pair of identical box fans. It was the introduction for what was called the Peak Anti-Freeze/Pro Circuit Honda team. Their riders for the East Region were the young Brian Swink of Michigan and Jeromy Buehl from Ohio. Swink, one of the fastest minicycle racers of all time, got the team started out right when he passed Team Green’s Ryan Hughes just before the finish line in an exciting duel. It was Swink’s first-ever AMA Supercross race.

In the 250 class TUF Racing Suzuki rider Ron Tichenor was the early leader, but it was Stanton’s night. He came up through the pack on the #1 Honda to run down Tichenor, as did Bayle and Bradshaw. Stanton drew first blood in what would be a long slog across the country. Here’s Orlando’s TV coverage.

The second race was in Houston, and this time Bayle got the win as well as the points lead on the #8 Honda CR250 after Stanton crashed early and ended up finishing seventh.

“I’m trying to be cautious,” the then-21-year-old Bayle told Cycle News’ Ken Faught. “I don’t want to tale any unnecessary risks. I want to win the championship. Last year it would have been mine but I got hurt. This year is going to be different.”

Because the 125 race at Houston was a combined East/West race, the other half of the Pro Circuit team showed up: Jeremy McGrath and Steve Lamson. McGrath would end up finishing second in his debut on the #125 Honda CR125. He was in between the Vohland brothers—winner Tallon and his older brother Tyson—the only time in AMA Supercross history that a pair of brothers finished on the same podium. Here’s the Houston race, both classes.

Anaheim was next, and this time Bayle had problems early and could only manage to finish fifth. Stanton won again and retook the points lead from his teammate. Kawasaki riders Jeff Ward and Jeff Matisevich finished second and third.

In the 125 class McGrath got his first win of the season on his blue and white Honda, taking the lead away from his teammate Lamson. The Anaheim race also marked the retirement of 1984 AMA Supercross Champion Johnny O’Mara, who had planned to race there but broke his collarbone before the season started. During the opening ceremonies he was given the Mickey Thompson Award of Excellence, a Kawasaki Jet Ski, and a puppy. Seriously.

Seattle’s Kingdome was next, now a single-night race. Larry Ward, riding for team Suzuki, was hoping for another win at his home race, but JMB, using remarkable cornering speed spoiled that plan. Start watching the show at the 34:00 mark and you will hear Mitch Payton helping out Larry Maiers in the TV booth, call two straight passes that Bayle makes on first Larry Ward and then Guy Cooper.

San Diego was the next round to follow, and Bayle ran his winning streak to two races on his Cliff White-tuned Honda, not to mention nine straight years of wins for Honda at Jack Murphy Stadium. This time he followed Stanton until the #1 Honda went off the side of the track and hit a hay bale. By this point JMB was back in the points lead, 7 ahead of Stanton. And the 125 class saw another steak extended as McGrath won his third straight—signs of things to come in the many years to follow.

So, how weird is this? The following week the series shut down so that the Tokyo Supercross could take place, with many of the top riders flying across the Pacific Ocean on the orders of their factory teams. Damon Bradshaw ended up winning, with Bayle second and Kawasaki-mounted Mike Kiedrowski third.

The series resumed on a soggy night in Atlanta, and the Honda freight train was finally stopped by Damon Bradshaw, who was still only 18 years old. He told Cycle News’ Henny Ray Abrams that he had “started riding the edge a little bit” and that the Tokyo win gave him the confidence that had been missing. JMB passed Stanton in the late stages for runner-up honors, extending his lead to 9 points. Brian Swink was again on top in the 125 East.

Daytona was next, but it started with a surprise announcement: Rick Johnson, the winningest rider in AMA Supercross history at that point, called it quits. “As everyone knows, the injuries I received in 1989 and ’90 [to his right wrist] have been troubling me ever since. The bones in my wrist are fusing together and there’s nothing that can be done. It’s not my style to ride around in tenth place, so I’ve decided to step down and retire from racing.” His last official race result was the eighth-place he scored at San Diego earlier in the series.

Stanton won Daytona for the third straight year, taking advantage of four crashes by Bayle. The rock-solid Stanton would actually end up winning four straight years (1989-1992) on the single toughest race on the tour. Bayle would still manage third, passing twenty-seven riders after his crash off the start in the oversized field and held on to his points lead.

The next three rounds were all JMB: He won in Tempe, St. Petersburg (Florida), and then the first night at Pontiac. It was the height of his dominant season, which really did turn out to be the “year of the Frenchman,” as he also won the AMA 250 Motocross Championship and the AMA 500 Motocross Championship, making him the one and only rider in history to win three major AMA titles in the same season.

Here’s some rough footage from the St. Pete race, with a sidelined Mike LaRocco helping Larry Maiers in the booth.

And check out the pass Bayle puts on Stanton at 28:30 mark—it’s a wheel tap on a step-up unlike anything you would see back then!

Damon Bradshaw finally stopped Bayle’s streak on the second night at the Pontiac Silverdome, but Bayle kept stretching things out in the points. But Jeff Stanton crashed and separated his shoulder. His hopes of holding his title for a third straight year were finished. Here’s the Motoworld coverage, hosted by Dave Despain.

Bayle got back on top again at Charlotte, winning Bradshaw’s hometown race at Memorial Stadium in North Carolina. The 125 race winner was Jeromy Buehl, which meant that three of Payton’s four riders would win mains that first season; only Lamson would not win a race. In fact, Lamson never would win a supercross race in either class, but he won twenty 125 nationals and two championships in what should be considered a Hall of Fame career. Here’s the Charlotte TV show.

Bradshaw got back on top at Dallas with another win, and then Suzuki’s Mike LaRocco earned his first-ever AMA Supercross win with a surprise victory in Las Vegas. Jeff Ward finished second, Bayle third. At the point JMB had a lead of 77 points over Bradshaw with just four races to go.

Stanton returned to the circuit and promptly won the East Rutherford race, but it was way too late to stop the Frenchman from taking his title away. Bayle clinched the championship in New Jersey and became the first foreign rider since Pierre Karsmakers back in 1974 to win the AMA Supercross Championship. When I interviewed him in the parking lot after the race, I asked JMB what was next for him. He told me he wanted to go into road racing. I honestly thought he was kidding.

Finally, Bayle closed out the series with a dominant run around the Los Angeles Coliseum.

Swink would win the 125 East Region and McGrath would win the 125 West, holding off a determined attack at the end by a kid on a Yamaha named Jeff Emig, who would win the last three races in a row. McGrath had broken his leg and had to miss a couple of races, and he and Emig would of course meet again many times in the years to come.