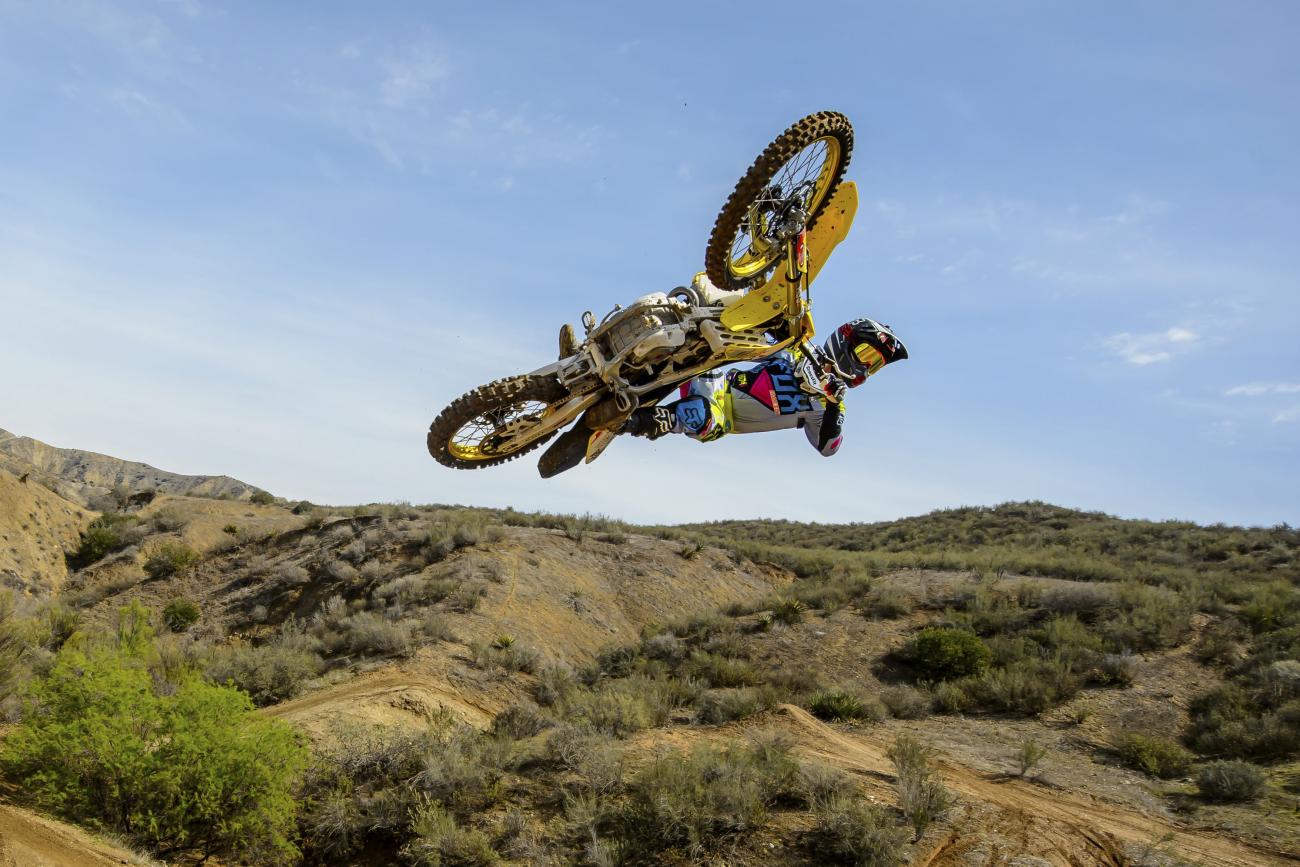 It rained, it poured—it’s Christmas time already for dirt bikers on the West Coast. Even Santa can’t give the gift of rain, so when the skies opened early, even pure workers like Ryan Villopoto couldn’t resist hitting the hills of California. Back east, others were putting in the finishing touches on their off-season programs. We even know a few riders that were so committed to their Florida training regimens that they made their team photographers meet them there, instead of doing the typical team thing in California. Every day counts right now, and an extra two days back and forth on an airplane just to do a photo shoot doesn’t make sense. Unless they could have gotten in some time in the hills. That’s worth the trip from anywhere.

Here’s some stuff we found lurking on the web this week.

No doubt you've probably seen this, as it showed up hundreds of Instagram posts last week. For you less tech savvy ones, we've posted it here for your enjoyment. That's 2014 Loretta Lynn Schoolboy 2 (13-16) B/C third-place finisher Rookie White absolutely sending it. Don't try this at home!

Vid cred @motocross_atv getting the best vid yet

Another view of our boy @rookiew663 sending it into orbit! I hear those new @yamahamotorusa's are pretty fast

We have no idea if this is real or not, but we’ll take the Internet’s word for it and assume it is.

Anytime we have a chance to catch up with a legend of the sport, we jump on it. No longer bound to contracts or weary of what a team manager may say, former riders typically offer the best stories and quotes. Last week, Racer X’s Aaron Hansel, while working on another project, caught up with Jeff Emig. He had a couple quotes left over, so we decided to share them here.

Do you have any special memories from racing in Atlanta that stick out in your mind?
I have two. First was the 1997 event where the gate flinched and my teammate Damon Huffman had a five-bike length holeshot from the outside. We went 1-2 that night, but I was still pissed that he got the holeshot and beat me when I felt I should have won it.

Second, years ago the Atlanta Supercross was held at Fulton County Stadium, not far from the Georgia Dome. If I remember correctly it was 1983, the year of the huge ice storm. Mark “The Bomber” Barnett won on Saturday night, and on Sunday was amateur day, and of course it was a mudfest with freezing temperatures. I was a 12-year-old racing the 80cc Expert class against all the big kids, but somehow I managed to win the event without even knowing. It was such a cluster it took a while for the scoring officials to figure it out. Winning the event helped me deal with frozen fingers and toes!

MARC Marquez IS MOVING AND PEOPLE ARE PISSED

People in Spain are not happy with hometown hero Marc Marquez at the moment. The reason? The two-time MotoGP World Champion is moving. Marquez is apparently packing up and heading to Andorra, a small principality between Spain and France with more favorable tax rate than Spain. Jalopnik.com has more.

With all the instability in the Spanish economy, I'm not sure I can blame Márquez for looking elsewhere for financial reasons, either. New residents who move to Andorra from Spain still have to pay Spanish taxes for five years, so this move can't be 100% financial, at least in the short term.

Some disappointment that a hometown hero is moving out of the country is to be expected. Maybe even a little bit of anger or frustration is kosher, too. But nope, that's not how genuinely terrible excuses for human beings roll. Let's take a look.

Read the entire article on Jalopnik.

If you've checked social media in the last few weeks, you've probably seen a ton of riders hitting the hills of Southern California. Due to an unusual amount of rain over the past couple weeks—fourteen-day rainfall totals exceeding five inches in many locations, according to this report on Monday—most riders are taking advantage. (Check out a clip of Tyler Bereman from Ryne Swanberg below.) With that in mind, we dug up some Simon Cudby photos from Beaumont Hill earlier this year, featuring: Ivan Tedesco, Shane McElrath, Lance Coury, Billy Laninoivch, and Racer X's own David Pingree.

Transworld Posts Funny Photo; Some Don't Get It

Earlier this week, Transworld Motocross decided to have a little fun. That was their first mistake. Don't they know you can't joke in moto? Especially on social media. The photo shows Ryan Villopoto with a cigarette in his mouth. It was obviously a joke. A joke that not everyone got. Seriously, though, HOW DID PEOPLE THINK THIS WAS REAL? It's sad. Everything about this is sad. Kudos to Transworld and RV for having some fun and poking the hornets' nest. You should try and read the comments; they are hilarious.

Growing up in the South, bass fishing was a way of life for some. While it never caught my interest (don’t have the patience), I can remember neighborhood friends spending hours at the lake during the summer trying to reel in their next big catch. But bass fishing is much more than just you and your buddies drinking beer on the boat, talking about your wives. It’s a highly competitive sport, with lucrative purses at tournaments…and a history of cheating. David Hill at Grantland dove head first into the secret world of competitive bass fishing. It’s hard to believe what he found. From Hill:

Mike Hart quickly did the math in his head. Three dead fish equaled 9.6 ounces. That was more than half a pound. In his last tournament, he’d lost his shot at a boat and $40,000 by only four ounces. He knew this was going to knock him out of contention. How the hell am I going to make this weight up?

Whenever I told friends of mine I was working on a story about cheating at bass fishing, they always asked the same thing: How in the world do you cheat at bass fishing? Let me count the ways, I’d tell them.

You can read the article in its entirety here. [Note: Reader discretion advised]

OLD SCHOOL VIDEO OF THE WEEK

Loop-de-loops? Son, we got backflips.

Do you know how badly I want to write about how few injuries we’ve seen this off-season what I want for Christmas? I fear even mentioning that none of the big names have gotten hurt this off-season some of the naughty stuff I’ve done this year for fear of retribution from Santa. I know if I mention it everyone will say I’m jinxing it they don’t care about my personal gift list. But you just have to believe. In Santa. You don’t have to believe in jinxing, though. There’s nothing I can write in this column today that is going to physically impact what some rider does at the test track. If I had those kinds of powers—if anyone did—they could do a lot more than impact some dumb dirt bike championship. I mean, couldn’t we just jinx terrorist dictators by saying stuff like “I notice those guys never catch terminal illnesses at a young age”? I don’t have the powers to jinx, so I’m going to say in full voice, here, that every single rider you expect to contend for this year’s Monster Energy Supercross Championship is still 100 percent healthy. I know, Adam Cianciarulo might have gotten jacked up over the weekend, but that’s literally one big-name dude out of the entire field. Those are amazing odds.

So, what happens now? If someone gets hurt between now and Anaheim, you can blame me. But that’s cool, because you’ll then have to believe I am the most powerful man in the universe, with the strength to injure other humans with the mere stroke of my pen, er, keys of the keyboard. And if no one gets hurt, then you’ll know that jinxes don’t work, and all the big guns will be racing. Win. Win. Ho ho ho!