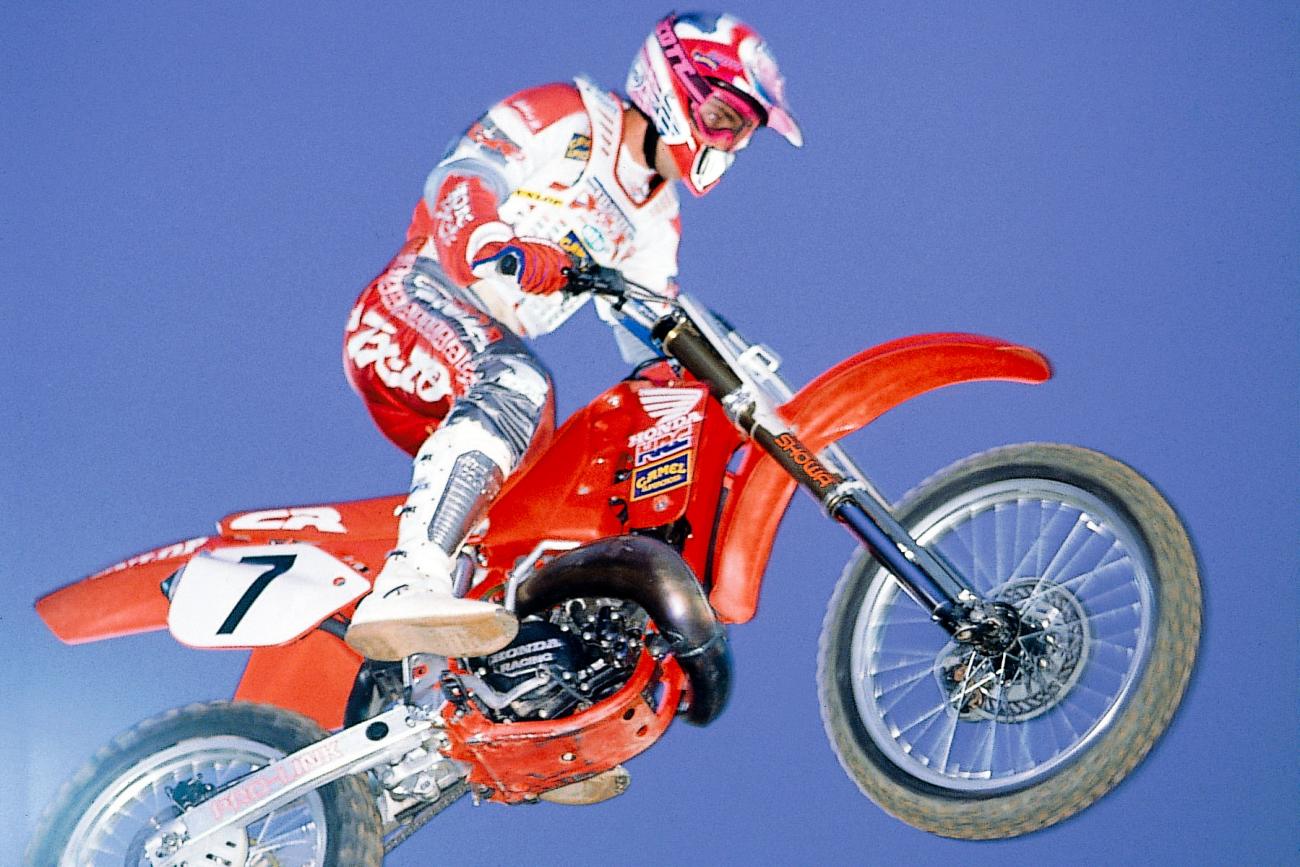 After the gloom of 1988, the next year’s AMA/Camel Supercross Championship seemed a welcome relief. Everyone was looking forward going racing again, putting the series back on the sports pages and off of the front pages of Los Angeles newspapers like the LA Times and the Orange County Register, which followed the sensational events of the previous year on a regular basis.

Unfortunately, Mickey Thompson and his wife Trudy were gone, and investigators were still trying to figure out who has ordered the shooting. A prime suspect (at least in the minds of many in the supercross world) was Mike Goodwin, who had spent the past few years before the murders battling Thompson and MTEG in court.  But Goodwin was gone too. Supposedly broke, he bought $275,000 worth of gold coins two months before the shootings, according to a report in LA Weekly magazine, and his wife wired some $400,000 to off-shore accounts on the islands of Caicos and Grand Turk. A few weeks after the murders Goodwin boarded his private sailboat Believe with his wife and floated off to the Caribbean—and the tiny nation of Belize in particular (which coincidentally did not have an extradition agreement with the United States). But even though the investigators could not reach Goodwin—and Goodwin himself was acting suspicious—they could not find any evidence against him. Even after interviewing some 700 people, including officers at the AMA and many other race promoters, all they could point to was the harsh feelings that came from the failed partnership and Goodwin’s bankruptcy that followed and some reported remarks where he basically said he was going to kill Thompson.

Here’s a good place to get back to the sports page and the actual racing on the track, before the whole Goodwin-Thompson drama would last for much of the next two decades, with enough twists and turns to fill two Internets. How this has yet to be made into a book or a movie is either beyond me, or a testament to just how complex the whole crime and investigation were. Paul Ciotti has done the best job of pulling it together that I have found so far, and his LA Weekly report can be found here.

Ricky Johnson was the defending champion again, and he rode into 1989 as everyone’s favorite. The Honda factory rider appeared to be at the top of his game. His Honda team had lost Jeff Leisk during the off-season to the 500 GPs, but they still had George Holland and had promoted Guy Cooper from a support ride. They also hired Yamaha’s Jeff Stanton to replace the Australian Leisk. Kawasaki would counter with two-time SX champ Jeff Ward and the mercurial Ron Lechien (though no one could have guessed at the time that the Dogger would only have one more SX win left in his career). Suzuki had Johnny O’Mara, Erik Kehoe, and Ron Tichenor. Yamaha had Doug Dubach, Shaun Kalos and Mickey Dymond.

Like a lot of these seasons in the forty-year history of supercross, 1989 actually got started before the calendar flipped. These new powers would eventually clash with the establishment and help write the results of the next five years of AMA Supercross, but at first they were relatively unknown entities. First came the news out of Japan that 16-year-old Damon Bradshaw, Yamaha’s prized prodigy, won the Osaka SX, once one of the most important dates on the off-season calendar. Bradshaw, who hailed from North Carolina, was well known on the minicycle circuit, but few of his future competitors had seen him on a stadium track until that Osaka win.

The other entity was even more of a mystery. French teenager Jean-Michel Bayle was already the 125cc World Motocross Champion, and he had ridden very well against the likes of Jeff Ward, Bob Hannah, and Johnny O’Mara at the annual Motocross des Nations. When he asked American Honda’s Roger DeCoster and Pro Circuit’s Mitch Payton for some help to test the waters in America in early 1989, they were glad to give him what limited support they had. Then he would return to Europe and chase after the 1989 FIM 250cc World Championship.

The series itself was also in flux, obviously. The void left by the events on the West Coast led the other promoters—PACE Motorsports, SRO, and Super Sports—to expand, even though the Mickey Thompson Entertainment Group was set to go on without their namesake and founder. The series returned to Anaheim and San Diego while new events popped up in places like Miami and Oklahoma City. All told, fifteen rounds would be featured, a third more than the previous season’s abbreviated schedule. Camel cigarettes came on as a new title sponsor, and previous backed Coors stayed on as well, helping increase the purse fund.  In addition, the series’ bought time on a ten-year old cable sports network named ESPN, and aired races a few months after they took place, but in a consistent time slot on Thursday night. While plenty of races had popped up on TV here and there (as you’ve seen from the YouTube videos we’ve linked up), this was the most comprehensive SX TV package yet. After some turbulent times, the sport was headed toward a bright future.

The season opened just as everyone expected it would: Rick Johnson was winning everything. First, he took advantage of Johnny O’Mara’s misfortune at the Anaheim opener when his Suzuki’s front steering stem broke just after the halfway point while he was winning. Johnson, now clad in JT Racing gear after five seasons in Fox Racing, ended up winning. His Honda teammates, Stanton and Cooper, placed second and third to make it a Honda sweep.

As for Jeff Ward, his title hopes were already dashed after he injured his foot off a jump in practice and had to scratch for the night. He’d miss the first few races before returning. The aforementioned Bayle, riding his first AMA Supercross, landed on a hay bale off the first triple jump at the start of the main event, ending his night immediately. And the rookie Damon Bradshaw, set to race the 125 East Region, entered the 250 class and wrenched his back in qualifying, causing him to scratch.

The annual Seattle doubleheader was next and Johnson was dominant both nights, already opening his lead to 21 points on Stanton. Here’s a clip from YouTube.

Then he went to San Diego and once again won his hometown race. Stanton finished second, and in a sign of things to come, young Bradshaw finished third—not bad for only his second-ever AMA Supercross race in either class. He was still just 16 years old!

The Miami SX was next, and Johnson would win again, making it five in a row to start the 1989 season. That marked his twenty-eighth career AMA Supercross main event win, pushing him past Bob “Hurricane” Hannah on the all-time wins list. The bigger news—for the moment, anyway—was what happened before and after RJ crossed the finish line. First was Bradshaw’s incredible win in the 125 main event, despite crashing several times. Cycle News’ Henny Ray Abrams wrote that he was “riding what could only be described as the race of a lifetime.” Here are some of the highlights.

Later, Jean-Michel Bayle—that kid who grew up watching Johnson, Ward, Bailey, and more in the stands of the Paris-Bercy Supercross—finished second behind Johnson. No one could have known at the time that a massive changing of the guard was about to take place, and that Bradshaw and Bayle were just two of the three parts that would lead the change. And no could have foreseen the Miami SX win being the last of Johnson’s stellar career.

One week later, in a wild race at Atlanta’s old Fulton County Stadium, Johnson made a rare mistake, crashing while leading and handing the win to his young teammate Stanton. It was the young Honda rider’s first win as a pro, and it kept the team’s perfect season going at six in a row, though RJ’s bid for an undefeated series was over after at the one-third mark. Here’s the battle for the win between Johnson and Stanton and their teammate Cooper in Atlanta.

With two weeks off before the next round at Daytona, the 1989 AMA 250 Motocross Championship opened at Gatorback Cycle Park in Florida. But what happened there would resonate for years to come. Johnson, as heavily favored there as he was in SX despite Jeff Ward holding the #1 plate, collided with privateer Honda rider Danny Storbeck in practice. The collision injured Johnson’s wrist badly enough to keep him out of the race. Later, the overall winner wasn’t Ward or Stanton, but rather the visitor Bayle, in what was the first AMA Motocross race of his career. It helped solidify Bayle’s plans to move to America at the end of the season, and Honda would have yet another weapon in their arsenal.

As for Johnson, his wrist turned out to be much worse than first understood. He broke what is known as the navicular, which is a small but vital bone in the wrist. He would fight to come back over the course of the next two years, even winning a couple of outdoor races, but he could not get it right for the rigors of supercross’ harsh landings and whoop faces. His days at the top were over, as were the days of Hannah, O’Mara, Lechien, Glover, Dymond, Barnett (trying a comeback with TUF Suzuki at this point), and so many other stars of that era. In fact, the only man from that golden era of mid-eighties’ AMA Supercross to also win in the nineties was Kawasaki’s Jeff Ward.

With Johnson out, Stanton stepped up quickly, adding wins at Daytona as well as Houston, and taking control of the series. Jeff finally had a really bad night in Tampa, ending his three-race winning streak. He was holding third in the main event with three laps to go in the twenty-lap Coors Extra Gold Super Challenge main event when the transmission let go, leaving him twentieth at the end and registering a single point. He was still 29 points ahead of his next challenger, who happened to still be Johnson! Wardy won, followed by Johnny O’Mara and Lechien.  Mike Kiedrowski, now on the #762 Honda CR125, won the 125 class over Bradshaw and “Mad” Mike Jones.

From there Stanton and Ward traded wins back and forth between themselves, the veteran’s earlier injuries finally allowing him to race without pain. Here’s one of Ward’s wins in Dallas.  It’s a classic. Be sure to watch all the way to the last lap!

But it was plain to all that Stanton was the future, and his challengers would come from the 125 class—not only Bradshaw but his Yamaha teammate Mike LaRocco, Team Green’s Jeff Matiasevich, Honda’s Mike Kiedowski and Larry Ward, and of course JMB when he came back from Europe.

Lechien got a win on one night in Pontiac, Michigan, and Ward took the other, the Kawasaki teammates shutting Stanton out in his home races. Stanton won in New Jersey when Ward’s bike broke, and Ward got another win at the Oklahoma Fair Grounds (quite possibly one of the most unique settings in the history of the series) when his teammate Lechien dropped his bike while leading with two laps to go. It was too little, too late. Stanton ultimately clinched the title there in Oklahoma and the $50,000 Camel bonus—not bad for a 20-year-old who had never won a professional race before the season started.

Stanton ended the series on a high note, taking the Los Angeles Coliseum finale.  The 125 East Region winner was Bradshaw, who despite crashing a few times too many still beat Kiedrowski by a point, while the West Region would once again go to Jeff “Chicken” Matiasevich. Both were soon to move up and apply pressure to the new champion, Jeff Stanton.

To watch highlights from the 1989 AMA/Camel Supercross Championship, click here.