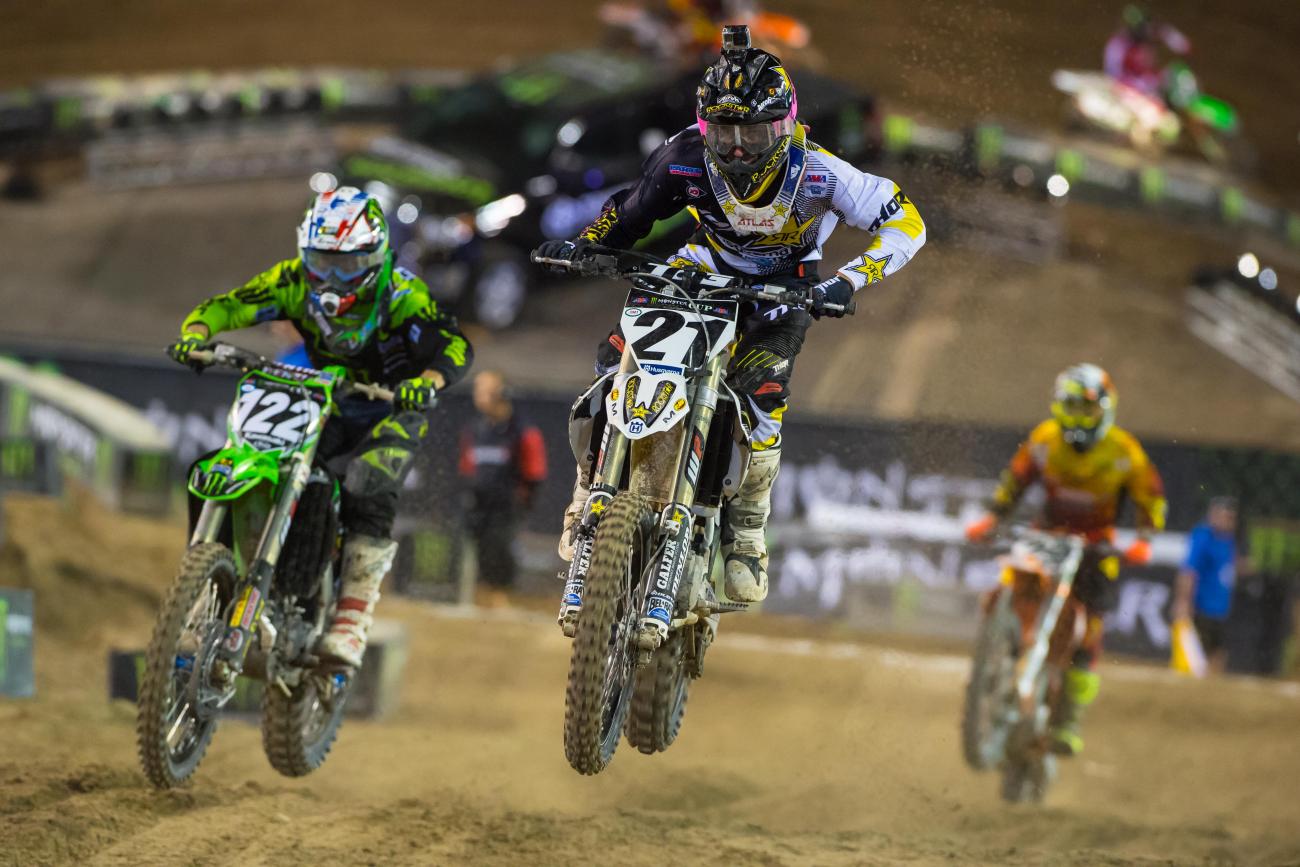 First, we posed the question to you in our Monday Poll: Which factory 450SX rookie will have the best season?

Currently the votes are close between Jason Anderson and Cole Seely, with Dean Wilson not far back. What’s our staff think? Here are questions and answers.

1. Which of these four rookies (Dean Wilson, Cole Seely, Jason Anderson, Blake Baggett) will have the best SX season?

Aaron Hansel: If you want to read something that will make you laugh, bookmark this page read it again in May. Racing is ridiculously unpredictable, which can sometimes make predictions, well, ridiculous. That said, I think Cole Seely is going to have more points than these guys when the season is over, mainly because of familiarity—he’s already notched a ton of 450SX races, and they were with the same team he’s on now. In other words, he’s jumping a much smaller gap than Dean Wilson, Blake Baggett, and Jason Anderson. Anderson, who is also on the same team and has been putting time in on the Husky 450 since the summer, will be close, but since he has zero experience in the premier class Seely gets the nod. Wilson and Baggett will no doubt have their moments, but I’d like to see both of them get through a whole supercross season without any injuries or major bad luck.

Chase Stallo: While certainly not an easy choice, in the end I think the experience of Cole Seely will notch him Rookie of Year honors. Entering next season, Seely will have already raced eleven 450SX races, compared to just four for Dean Wilson and zero for Blake Baggett and Jason Anderson. It’s hard to dismiss that kind of experience. After struggling to an average finish of thirteenth in his maiden 450 crossover in 2011, Seely averaged eleventh in 2012 (including a sixth and fifth place finish) and ninth in 2014 (including a podium). Seely will have the most points at seasons end, but I don’t think Anderson, Baggett, or Wilson will be far behind.

Jason Weigandt: This is tough because I’ve been pumped on all of these guys before, but while sometimes they hit, sometimes they miss. Sometimes I get too excited about these guys. I was very pumped on Wilson’s 450 appearances last year, but man they did not end well. I was banging the Anderson drum before his rookie pro season. He ended up sucking. I thought Seely would win the 250SX West Region last year. And Baggett has become one of the most puzzling riders of all—you never know what you’re going to get.

So, my answer is Wilson, but that’s scary because he’s brings some risk. I’ve heard a fair share of negative chatter on him, from his arm pump issues last year, his continued failure to “get it done” in terms of a 250SX Championship, and even him having too much fun on Instagram and Twitter. Listen, I hear all that and I get it, but I think he still has what it takes to be special, so I don’t want to judge him completely on those 250SX campaigns. And I put zero stock in how a dude spends five minutes a day on social media. If Dean gets his head on straight, he can produce tremendous speed. We can work with speed.

Jason Thomas: I had to think about this one for a bit before drawing a conclusion. These are four very good riders moving up and maybe the strongest "graduating class" we have had in a long time. My choice is surprising even to me. I went with Jason Anderson on this because I believe in Aldon Baker's program. Anderson has plenty of talent, and 2014 was a breakout season for him. Moving up to the KTM-like Husqvarna 450 and joining forces with the most successful trainer in the sport's history is a great recipe for success. I think he will have a great 2015 season and open some eyes along the way.

Steve Matthes: Reading the other entries for this column, I see that Hansel and Stallo think that Seely will have the most points, Weege went with Wilson (“We can work with speed,” was the infamous quote from the great Mitch Payton), and JT went with Anderson. I like Seely to emerge out of these four with the most points, but I think Wilson will have the best result. I was very impressed with Anderson and him setting the fastest practice time at the Monster Energy Cup, but having exactly zero races on the 450 makes me think he’s more susceptible to rookie ups and downs. Seely and Wilson have some pretty decent experience in the premier class, and I think that matters somewhat. I predict that Seely goes sixth in the points and Wilson makes a podium this year. Stamp that.

Hansel: Looking strictly at each rider’s history, you have to put Wilson and Baggett in the fast yet inconsistent category. Both have won 250SX races, but both have had problems staying healthy all season. Seely is usually pretty consistent, and given that he’s in a familiar setting with Team Honda, there’s no reason to think he won’t be consistent again. Ditto for Anderson, though there’s a certain etiquette expected in the 450SX Class, and time will tell if Anderson’s aggressive style will raise any conflicts in that department.

Stallo: All four have made their names in 250SX on consistency. Take last year for example: Jason Anderson’s average finish was 2.5, followed closely by Cole Seely (2.6), Dean Wilson (5.1), and Blake Baggett (5.5). Obviously, it will be tough to match those finishes in a loaded 450 class, but to answer the question: I don’t foresee any flashes in the pan in this class. Consistency will reign supreme.

Weigandt: “We can work with speed.” Wilson is the exact definition of flash. Heck, for half of last year’s Daytona SX main, his first-ever big bike supercross, he was blowing minds. Then his arms blew up. But I think he can run even with the biggest 450 dogs at the right time. I think Seely will be very dangerous from a point-scoring situation. He rides within himself and might be able to avoid the big rookie crashes. I’d put Anderson right behind him, powered by relentless determination on the track. He doesn’t give up. On a 450 for twenty laps, though, that can be a double-edged sword. Can he really bounce off the top of every jump and hang on the back of that big bike all the way?

JT: For the flash, I am going to go with Dean Wilson. I think Dean will be near the top of the board quite often for timed qualifying. I think he will battle near the front and show blazing speed. I also think he will have some head-scratching weekends and inconsistent results. He is switching bikes and teams, and for the first time, will not be on a Kawasaki. There will be a learning curve there, no doubt. For the consistency, I am going to go with Cole Seely. I see Cole as a very smart, calculated rider that won't make huge mistakes. He will get good starts and put himself in good position to succeed. Staying off the ground and out of trouble will pay off for Seely when May rolls around.

Matthes: I guess I already said this—Wilson will be more flashy and have the better results while Seely is more consistent and will finish higher than any of the other three in the points.

3. Can any come close to Ken Roczen's 2014 rookie year? He won two races and was a title threat for the first half of the year.

Hansel: No, and it’s possible that Roczen himself might not even match or beat his 2014 season. Just look at Justin Barcia who won two races in his rookie year (2013) then seemed to struggle in 2014. It’s not that these guys aren’t capable of making it happen, it’s just that it’s extremely rare for a rookie to be able to put that many pieces of the puzzle together on the first try.

Stallo: While I don’t see a “title threat” in this group, it’s not out of the question that one, or even two, of them pulls off a race win. Ryan Villopoto won two races his rookie season, as did Justin Barcia. Ryan Dungey won six. And Eli Tomac probably would have won a season ago if not for spending most of the season sidelined. It will be tough to stay in the title hunt for any of them, but don’t be shocked to see a win or two late in the season.

Weigandt: Roczen has a special talent for picking things up quickly. Those results are not realistic for many riders. Last year, I thought the Roczen/Tomac/Hahn group of top grads would be good for two total wins. Roczen got them both to bail me out. I think we see one win, total, from this rookie group.

JT: I think expecting anyone to replicate Roczen's 2014 debut is silly. He was shot out of a cannon to start the season, and even he couldn't maintain that level of excellence as the season grew old. I expect to see a lot of variation at the front of the pack in 2015 and multiple race winners. Not to say that one of these four riders won't be in that mix, but I don't expect to see any of them carrying the red plate for months at a time either.

Matthes: Two wins, eight podiums, and third overall in the points: that’s Kenny Roczen’s rookie stats. These stats, I think, will be hard to match for Seely, Wilson, Anderson, or Baggett.