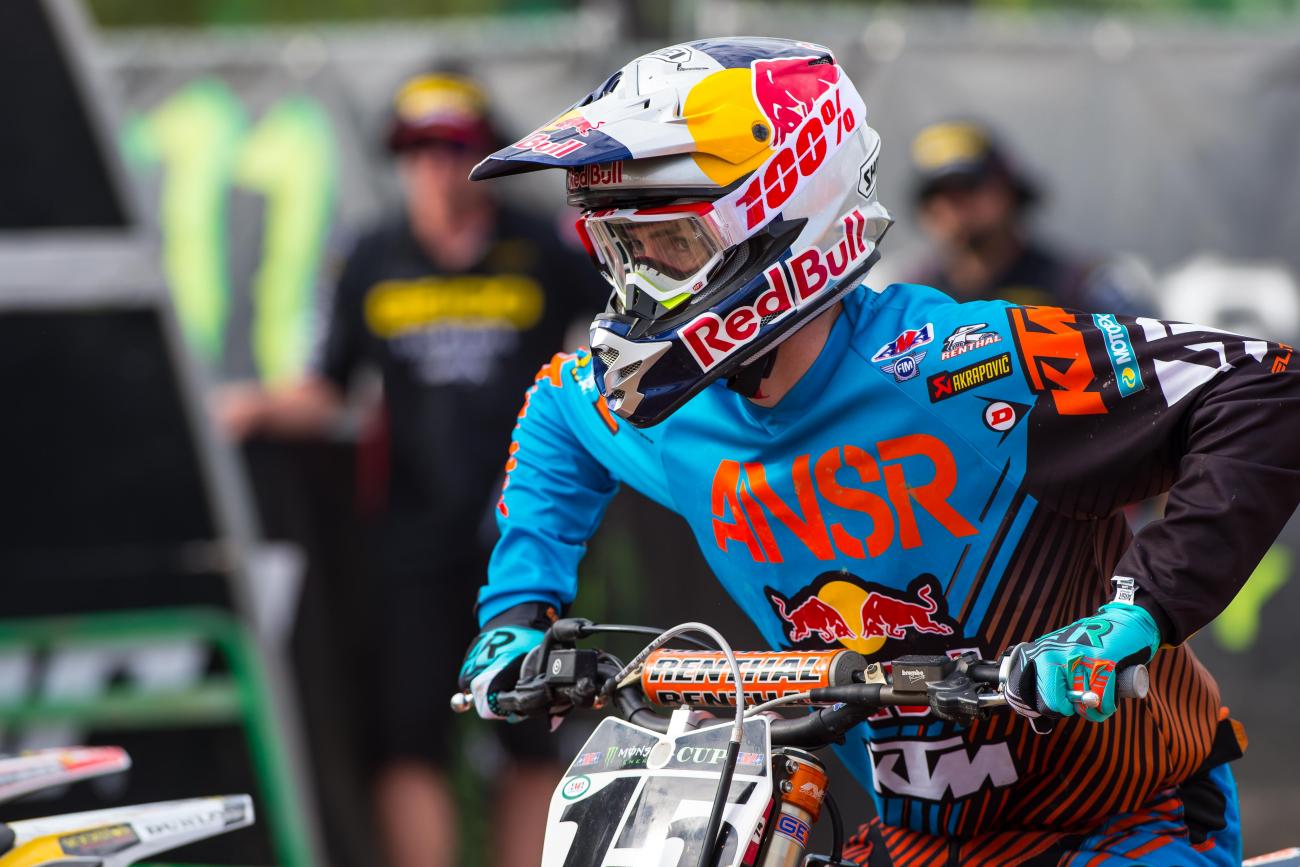 What's the word on the street this week? We pulled together some of our favorite stuff and stuffed it in here just like Thanksgiving stuffing. That's good stuff!

FMF's @murrayfmx heard we were asking where you were all riding today and he sent us this lil gem ! How about a 360 for ya!! #progression

And this sums up my Saturday nights main event. Haha #datbootydoe

Arenacross contender Zach Ames suffered a wardrobe malfunction last weekend in Germany. He still managed to finish the race. "At one point my feet could barely reach the pegs because my pants had fallen so far."

It’s not often motocross shows up on Forbes’ radar. Recently it has, though. The case is against former pro Ben Evans’s father, William and his company Dave Evans Construction. According to Forbes, the sponsorship expenses of Ben’s racing were brought in to question by the IRS because Ben was being sponsored by his father. The IRS questioned “whether the sponsorship expenses were ordinary and necessary business expenses.” From Forbes:

Between 2006 and 2007 DEC put over $150,000 into motocross expenditures – mostly payments for motorcycles, parts, equipment, racing fees, membership fees, fuel and food. There was just over $40,000 in offsetting income – mainly the sale of motorcycle parts.

The IRS argued that the sponsorship of Ben was a personal expense, but the Tax Court was having none of it, pointing out that all five children had been supported in their motorcycle pursuits, but only Ben, who had already achieved some national prominence, was sponsored. The IRS also argued that supporting Ben in races outside the company’s business area was of no benefit, but the Tax Court did not buy that argument either.

You can read the full article here.

Why Does Herlings Generate Controversy?

Last week I was reading an interview with Jeffrey Herlings by Vurbmoto’s David Bulmer. In the interview, which you can read here, Herlings discusses his relationship with KTM boss Pit Beirer, his recovery from a broken femur and his new deal with KTM. Herlings is always open and forthcoming; I suggest you check out the entire interview. Anytime Herlings does an interview, two questions are inevitable (which they should be): “Are you coming to America?” “When are you moving up to MXGP?” Read any message board or comment section and you will see how divide people are on this issue. It’s Red Sox/Yankees, Yale/Harvard, Johnson/Ward. There is no middle ground. My question has always been why? Why does he create so much buzz? Why is there so much controversy surrounding his decisions? I ask some of the Racer X Online staff their thoughts:

Jason Thomas: Jeffrey Herlings is a lightning rod for opinionated discussion. His sometimes outlandish comments coupled with his absolutely brilliant riding ability make for great bench racing fodder. Most recently those talks have centered around his decision to stay in the MX2 class longer than some would deem appropriate. Many feel that he is more than ready to move up to the premier MXGP class and compete with Europe’s best. I have heard this complaint many times in the past year and while I can understand the logic, I tend to be a bit more neutral on the subject. If Jeffrey wants to stay down and rack up wins and bonus checks, that’s his prerogative. He is chasing records and titles, that is not a secret. Keep in mind, he is still really young and has plenty of MXGP years in front of him. I have never heard a rider complain that they waited too long to move up to the highest level class. It is almost always the opposite case. Being too prepared is not something I would consider to be a problem. He will move up when he is good and ready.

Matthes will whine about the horrific injustice that Herlings is responsible for. How can anyone allow this evil plan to unfold!? To that, I say calm down. Everyone take a deep breath and get over yourself. Herlings is racing against people the same age as he is. Just because people consider him to be “superior”, that doesn’t mean he has to do abide by outsider wishes. This is his career, his life and he wants to do it his way. People will try to detract from his records and titles but that is a complete joke to me. There are no asterisks on titles or wins in this sport. Ever.

Steve Matthes: I'm not really sure what's up with the "Herlings phenomenon" but I don't buy into it one bit. I was just speaking to someone last weekend in Lille from one of the GP teams and they told me that he doesn't want to move up to MXGP because he wants to "chase the numbers" in the words of this insider.

That's ridiculous to me. He's clearly the class of his, err, class and needs to badly get out of there. His wins and titles are hollow to me. He'll be in the record books like Barry Bonds is in the record books over here in baseball. I don't mean to imply Jeffery is cheating like we all know Bonds was, but there's a similarity in how people don't acknowledge their numbers the same was we do with others. We just ALL know, y'know?

Herlings has been in the class since 2010 and that year's champion Marvin Musquin moved to America. The next year he fought Kenny Roczen tooth and nail for the title and after Roczen won, he moved to America. The next year JH won the title but his two main competitors Tommy Searle and Jeremy Van Horebeek had to move out of the class for aging out. The next year, his third in the class, he walked to the title. This was the time where Herlings needed to move up to MX1. But nope, he stayed down last year and was working everyone until breaking his leg. So now Jeffrey moves into his fifth year in the class and I suppose he'll win again. The ridiculous rule of having to be under 24 to race MX2 ensures Jeremy will keep winning or the actual ambition of riders like Roczen and Musquin to move to a tougher class (or country as these two did) just keeps the Herlings machine running. I just feel like Herlings staying down in MX2 is one of the more travesties in motocross. Good on you Mr. Herlings for winning all those races...you go man.

Jason Weigandt: People get mad for one simple reason: Tony Cairoli has been cair-rolling to one MX1 title after another, while Herlings essentially does the same in MX2. Everyone knows it would be cooler to see these guys race each other instead of clinching titles early in separate classes. Luckily, this year's MX1 chase will be spiced up by Ryan Villopoto's entry, and the usual big-class suspects like Desalle, Van Horebeek and Paulin will be capable, too. But dumping a Herlings bomb into that class would be incredible. Cairoli and Villopoto against the brash youngster? Sheesh!

Hey, I remember patrolling the sidelines of the 2004 AMA Nationals as a pit reporter, watching Ricky Carmichael win all 24 motos in the 250 class and James Stewart win 23-of-24 in the 125s. If I had a dollar for everyone who said "Sure would like to see them race against each other!" I'd have retired ten years ago. Who doesn't vote for a clash of the generational titans?

David Pingree: I don't care who you are, if you start winning too much people are going to hate on you. Nobody likes a sandbagger and at this point there is nothing left for Herlings to prove in the MX2 class. Yes, Herlings is young but that didn't stop James Stewart or Damon Bradshaw or any number of young riders from stepping up and being successful. Herlings could jump up right now and put some pressure on Cairoli and that would make for better racing. I think Ryan Villopoto is going to be the guy doing most of the winning so it would be a race for second anyway [except at the deep sand races]. I imagine there is a good number of fans that Herlings is alienating by milking the system and staying put for yet another year. He would garner more respect by stepping up and facing the challenge of the premier class. Also, it will be his only chance to race RV, the best rider in the world at the moment.

Whether it’s Pandora, Spotify, or another site, most Americans are plugged into some variance of a streaming music site. Free music, what’s not to love? Since the demise of the record industry—thanks in large part to Pandora predecessors such as Napster—free music has become an expectation for most Americans. Record stores have mostly disappeared, and music is either bought or listened to on the Internet. How has this affected artists? Sam Lefebvre of East Bay Express has an eye-opening piece on the price of Pandora.

Westergren and other Pandora officials often argue that Pandora has pursued lower costs because it has yet to actually turn a profit. And although it's true that the company has never made more than it spends, Westergren's defense does not stand up to close scrutiny. Records show that, like many web companies, Pandora's top officials and privileged shareholders have been collecting millions from stock transactions despite Pandora's supposed unprofitability.

In short, Pandora has pitched artists on the idea that it represents an escalator to financial viability in the digital age, but, in truth, it's just a staircase painted like an escalator — with the steps missing.

The 43rd annual Thor Winter Olympics at Gatorback Cycle Park kicked off on Monday. The Mini Os, as they are commonly known, are an annual motocross Thanksgiving tradition. We went digging through the Racer X photo archive room last week in search of a few flashback photos. Well, we stumbled upon something even better: Thom Veety’s entire 1992 crash collection. We picked out a few for you to enjoy. Make sure to tune to RacerTV all weekend long for live action.

After talking to new EnduroCross Champion Cody Webb this week—who is racing, training, testing, and improving while also taking college classes in engineering—something occurred to me. In today's age of online college classes, is it now possible for racers to actually get their eduction while still applying themselves to their sport? I'm not talking about getting an engineering degree, but just a few courses per semester, and by the time the decade-long journey as a motocross pro is complete, enough credits to be close to a degree, just in time to join the real world of the working stiffs. Yeah, it'd be hard, but any trainer will tell you you can't train for twelve hours a day. There's a time and place for this—anywhere you can bring a laptop. And further, if a really enterprising online college wanted to show off the true flexibility an online degree offers, why not sponsor a few young guys with, gasp, a scholarship? If a globe-trotting athlete can complete a degree, anyone can, and that'd be a heck of an advertisement for an online university. Think about it. (Or even study it.)