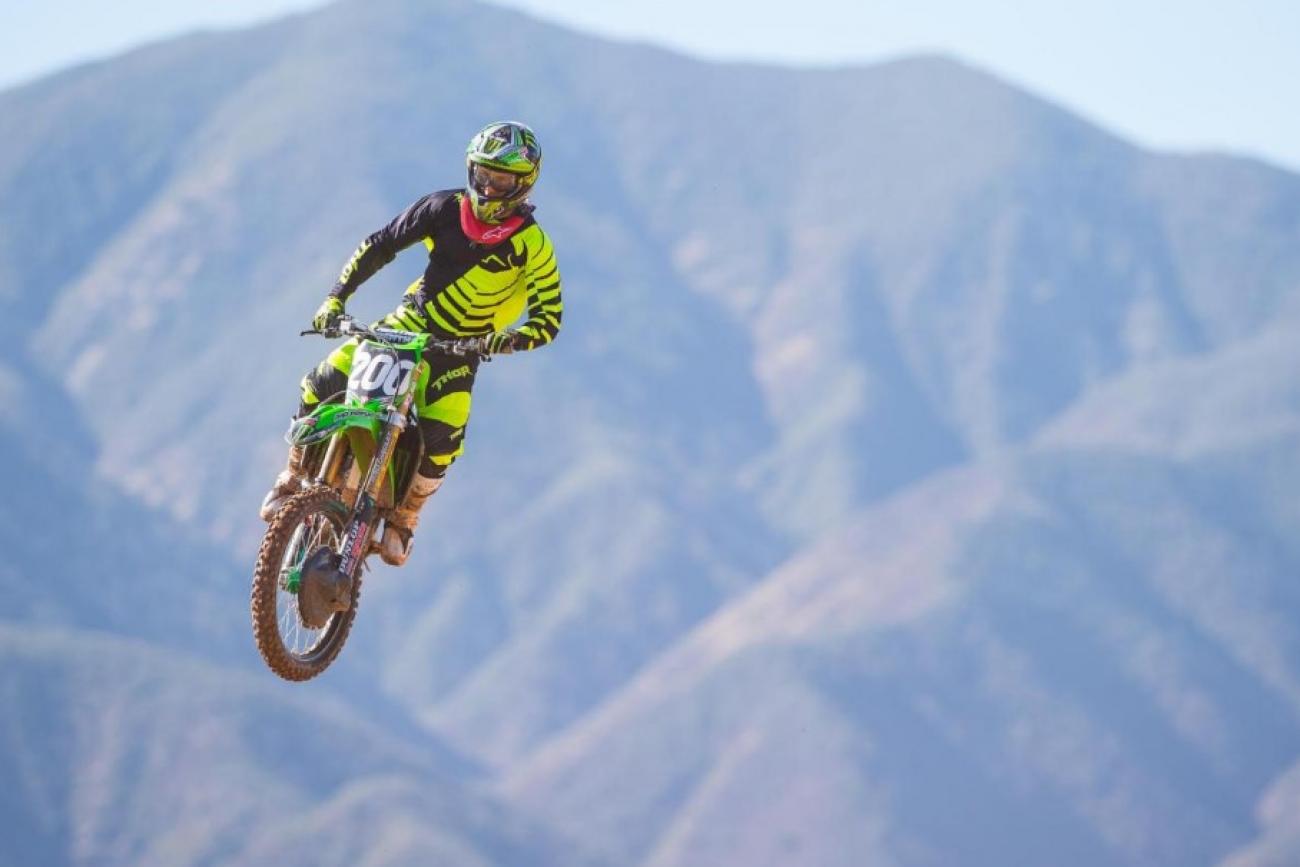 We're still more than a month out of Anaheim 1, so it's refreshing to see even some privateer riders hooking onto 2015 deals, as riders are often left scrambling until the final moments. This latest round of updates includes, um, updates on some of these new or revamped privateer outfits.

That said, there are still some riders looking for permanent work. Here's the latest.

Notes: Tomac returns to GEICO for his second 450 season with the team. He has spent his entire professional career with Honda. This team also runs a 250 operation (see below).

Notes: Canard re-signed for two more years in July. “The enthusiasm around Honda right now is a really good thing that I’m excited to be a part of, and I think 2015 is going to be a great year for us,” Canard said in a press release. Joining Canard will be Cole Seely, who spent last year with Lucas Oil/Troy Lee Designs Honda in the 250 Class. “It’s my dream team, and it’s nice to officially be a part of it now,” Seely said in a statement. Seely's multi-year deal was announced in August.

Behind the scenes, Honda has revamped its racing structure, with the works unit from Japan (HRC) getting back involved with bike development in a big way. Because of that, though, Jeremy McGrath, who worked as a test rider, is no longer with the brand.

Notes: Honda was so happy with Noren's performances during the 2014 Lucas Oil Pro Motocross Championship that they found a slot for him here. This team, known as Crossland Racing in 2014, now gets some factory support. This team also runs a 250 operation (see below).

Notes: Suzuki signed Monster Energy/Pro Circuit Kawasaki’s Blake Baggett to pair with the returning James Stewart. Baggett will move up to the 450 Class for 2015. "My teammate is going to be James [Stewart], so that’ll be awesome to work together. We rode all of 2013 outdoors together down at his house, and we’re good buddies. Just work together and try to put the two yellow bikes up front," Baggett told Racer X. Stewart’s racing status is still up in the air with pending WADA dealings. Yes, this is taking forever.

Notes: After four years with KTM (in America), Roczen signed a two-year deal to join RCH Factroy Racing this off-season. Roczen began his career in the FIM World Motocross Championship with Suzuki. “My decision when I went with RCH, people were like, 'It’s not factory.' Yes, we are factory. It doesn’t even matter; I have so much faith in the bike, I’m like whatever. Just give me the bike and I’ll make it work,” Roczen told Racer X. We hear that Tickle will return for another season.

Notes: After five years with Monster Energy/Pro Circuit Kawasaki, Dean Wilson is headed to Red Bull KTM to join Ryan Dungey. KTM announced they have signed Wilson for two years. “Dean is a very talented rider who has shown a lot of potential on a 450,” commented Red Bull KTM Factory team manager Roger DeCoster. Wilson added: "This is an amazing opportunity for me to learn from Roger and Ian [Harrison] and the rest of the crew." Expect Wilson and Dungey to be on brand-new 2016 style KTMs—under the 2015 "Factory Edition" name—come Anaheim. This team also runs a 250 operation (see below).

Notes: Justin Brayton will move over from Toyota/JGR Yamaha to join the returning Andrew Short, the team announced. “I am ready to win, and my new KTM 450 SX-F is a bike that I am 100 percent confident I can do that on,” Brayton said in a press release.

Notes: Jason Anderson re-signed with the team earlier this year. The team is switching brands for the third time in as many years—from Suzuki to KTM to Husky (but KTM owns Husky, so that’s not as crazy as it sounds).

Much of Anderson's bike is built by the KTM (Husqvarna?) Factory Services wing (engine and suspension), so he has top-level equipment. This team also runs a 250 operation (see below).

Notes: After spending his entire pro career with Honda (GEICO and American), Barcia has signed with Toyota/JGR Yamaha. “There was a ton of options for me. I had a lot of meetings and met a lot of great people, so that was pretty cool. But I leaned towards JGR. It just went really good when I had some talks with Jeremy Albrecht and Coy and also Joe Gibbs, the coach,” Barcia told Racer X. Peick, who spent years as a privateer, will have his first full season under a factory rig. He spent the summer with RCH/Soaring Eagle Suzuki. Phil Nicoletti is returning to the team for all twelve rounds of the Lucas Oil Pro Motocross Championship.

Notes: Ben LaMay returns for another year with the team. This team also runs a 250 operation (see below).

Notes: Killy Rusk will race the 450 Class for the new team. This team also runs a 250 operation (see below).

Notes: Kawasaki signed Davi Millsaps and Wil Hahn to replace Ryan Villopoto (who is going to the GPs) and Jake Weimer. “We have big shoes to fill after winning four straight supercross titles, but I could not be more excited to have both Davi and Wil on the team,” Dan Fahie, Monster Energy Kawasaki team manager, said in a press release.

Notes: Kawasaki will continue their partnership with Discount Tire/TwoTwo Motorsports. Josh Grant has signed with the team, giving Chad Reed a teammate for the first time since becoming an owner in 2011.

Notes: Mike Alessi will be back with SmarTop/MotoConcepts in 2015 and will race "AMA Supercross season, AMA Pro Motocross, Canadian Motocross, and a very strong interest for a World GP partnership," according to a recent press release. The team has also come to terms with Vince Friese. He will race the 450 on the West Coast and a 250 on the East Coast.

Notes: The popular Wey will continue to forge his own, ahem, way, with his own team in 2015.

Notes: Team 3BR, a small family run team who helped Tevin Tapia a season ago, will expand and bring on Nick Schmidt and Jake Scarbrough for 2015.

Notes: DirtCandyGraphics/PRBC.com returns for its second year and will bring back both members, Lind and Stewart, for 2015. Metcalfe has signed with the team and will race at least the first six rounds. Oddly, he'll be on a Suzuki with this team but then switch back to a Kawasaki for the Canadian Nationals this summer. “I’ve raced the Monster Energy Cup on my own with some help from Dirt Candy Graphics. I feel like I've got a good long term plan with Dirt Candy and I look forward to focusing on racing and results," Metcalfe said in a statement.

Notes: Same riders returning to this team for 2015. Partridge tore his ACL last year but was fast in his return to action at Red Bull Straight Rhythm.

#75 Josh Hill: Hill told us recently that while he doesn't have anything set in stone yet, he will be on the gate at Anaheim. We're not ruling out his current off-season deal with Monster Energy/Pro Circuit Kawasaki moving into 2015.

#12 Jake Weimer: The latest on Weimer is that he is joining Team Tedder and reportedly has an out-clause if he gets a fill-in ride.

#36 Matt Goerke: Goerke is headed to Amsoil Arenacross for the Monster Energy Team Babbitt's Kawasaki team. Then it's back up north for the summer with Rockstar Energy Drink/OTSFF Yamaha, as he'll race the Canadian Nationals (MX1) in 2015. Goerke last raced in Canada in 2012, winning the MX1 Championship that season.

#53 Jimmy Albertson: We hear that Albertson is working on his own deal with Arma Energy and MotoSport.com. He will ride Yamahas.

#11 Kyle Chisholm: Chisholm split his time between Canada and the US in 2014.

#63 Chris Blose: Blose will ride for the Babbits/Monster Energy Kawasaki team in arenacross next year.

Notes: Kawasaki has announced the 2015 Monster Energy/Pro Circuit squad. The team will feature four new additions. Adam Cianciarulo is the only returning member.

Notes: Justin Bogle and Matt Bisceglia return to the team to join recent amateur grads RJ Hampshire and Jordon Smith. Smith will have to ride a few Amsoil Arenacross rounds to gain his eligiblity for supercross, so expect him to ride East. The team has also signed Malcolm Stewart to a deal for the 250SX West Region.

Notes: The 250 squad for Rockstar Energy Racing is all-new in 2015. Martin Davalos returns to the team (he rode for Bobby Hewitt’s squad in 2012) and will be joined by the 2014 GEICO Honda duo of Zach Osborne and Zach Bell.

Notes: KTM announced the addition of Justin Hill in September. Hill comes over from Monster Energy/Pro Circuit Kawasaki. Musquin returns to the team.

Notes: Jeremy Martin and Cooper Webb signed extensions with the team during the season. Anthony Rodriguez returns for his second year with the team and will be joined by Aaron Plessinger, who moves up from amateurs.

Notes: Alex Martin and Greg Gehrer return to the team and will contest the 250SX West Region. Rookie Luke Renzland will race the 250SX East Region.

Notes: We expect Kyle Peters to return and the team added Kyle Cunningham, who spent last year with SmarTop/MotoConcepts, to the mix. We also expected the team to bring back Cade Clason and to sign one more 250 West Region rider.

Notes: Josh Hansen returns to racing with help from MotoSport.com and Kawasaki. He will race the 250SX Class.

Notes: Williams and Wentland will compete in the 250SX East Region, while Blake Dungey (Ryan's brother) will contest the Lucas Oil Pro Motocross Championship on  a 450. Williams is also confirmed for the Nationals on a 250.

Notes: Scott Champion and Zach Freeberg return to the team, and will join new member Cole Martinez. All three will race the 250SX West Region.

Notes: The 2013 MX2 Canadian National Champion is returning from a broken femur in January that cost him all but one round in supercross in 2014. He will race the 250SX West Region.

Notes: A new team for 2015, Barn Pros Racing/Home Depot Yamaha, based out of Washington, will contest the 250SX West Region.

Notes: Zimmer will race the 250SX East Region. The team signed Killy Rusk for the 450 Class.

Notes: Dakota Tedder is back and we hear the team may add Weimer. Stay tuned.

Notes: Alix rode for the team in Lucas Oil Pro Motocross. He will make his Monster Energy Supercross debut in 2015.

Notes: Lemoine returns for another year.

#30 Christophe Pourcel: Pourcel's deal is always a bit of a mystery, but he told us at the Bercy Supercross that he was never able to get fully comfortable on his Yamaha in 2014. He'd like to put together a 2015 deal here if he can find a bike that works for his unique riding style.

#72 Blake Wharton: After spending the summer riding Supermoto, Wharton is expected to return to supercross next year. He has not announced a deal.

#52 Mitchell Oldenburg: Oldenburg broke out on the 450 in Lucas Oil Pro Motocross this season, but has spent the past two years in supercross in the 250 Class. We hear he will be part of Albertson's deal next year.

#60 Jake Canada: Canada, who spent last season with 51FIFTY Energy Drink, is putting together his own program for 2015.

#95 Nick Gaines: The rookie got help from Traders Kawasaki after graduating from Loretta’s. No word on if he returns to the team in 2015.

#73 Gannon Audette: No word on the former Star Racing rider.

#81 Tommy Weeck: Told us recently he hopes to put something together for a full season in 2015.

#89 Brady Kiesel: Told us recently he is in talks with a few teams and looks to have a deal in place soon.