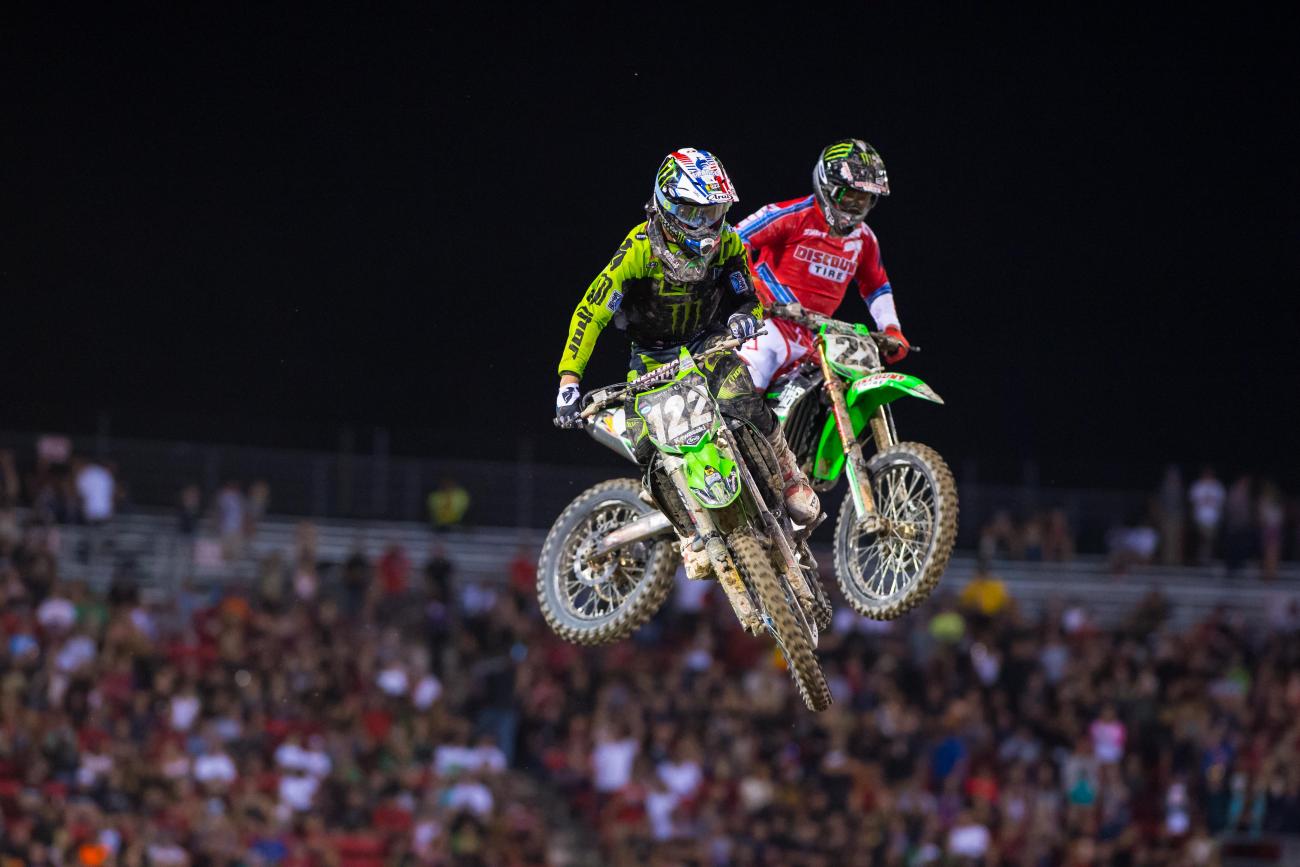 We swept up the shop floor again and found these nuggets of info in our dust pan. One man's junk is another man's treasure. Read this stuff if you want, or discard it. Welcome to The Word On...

This week riders are heading to Europe to start the annual international SX season (translation to English: making money season) while others back here are considering their next move. Some of those moves are big whips or even 360s. And some of those moves will be tracked digitally. Dig in to do the same.

[Note: This feature is ever evolving, so if you have a bitchin' idea email Chase Stallo at chase@racerxonline.com or drop us a comment below.]

Jumping the 120 this morning at @jfitzo #fitzland next thing I know @tedescophoto is flying his personal helicopter into my head almost! Watch it next time @tedescophoto. @fmf73 @aliasmx @ride100percent #FMF #Aliasmx

Sometimes you just gotta throw a quad in there @nickimsey video.

We see ya, Justin.

Social media is changing the way we view sports and professional athletes. Breaking news, right? Tell you something you don't know? Well, Hookit, a company that "connect(s) athletes with sponsors through the 'Internet,'" tracks social media growth amongst action sports athletes and releases monthly reports. The big revelation this month is that Ken Roczen, according to Hookit, has taken over James Stewart as the top motocross athlete. According to Hookit, Roczen's social reach expanded to over 500K fans and generates over 1.5M fan interactions.

The top growing athletes this month were Ben LaMay (450 Class) and Malcolm Stewart (250 Class), each of whom generated a 10-percent increase in fan growth, according to Hookit.

Let’s be honest, guys do as well. There’s nothing cooler than seeing a fatty whip thrown down. (Ok, we lied, the Jeremy McGrath nac-nac is the absolute best—don’t try and argue—but the whip ranks right up there.) The Monster Energy Cup provides a platform for some of the best whip artists in the world. Simon Cudby took some killer shots that haven’t seen the light of day. So we’re sharing them here.

As a kid, one of my favorite video games was NFL Blitz. Something about being able to pummel a guy with a Randy Savage-esqe elbow drop minutes after the whistle blew was enjoyable. It was such a stark contrast to the simulation style of the Madden franchise. Last week, Aaron Gordon of VICE Sports published a lengthy feature on how “NFL Blitz” walked the fine line of violence and became a hit. An excerpt from the piece:

Turmell and DiVita spend the weekend with the NFL going through each animation. Upon seeing the spinebuster move for the first time, DiVita distinctly recalls the league reps exclaiming, "Are you guys &%#$ing out of your minds?" Turmell and DiVita feigned shock, like a kid caught doodling on his school desk during class. Even though DiVita spent two days motion-capturing the move himself, he knew it had to go. "It was painful to take that one away," he said, "because I thought it was beautiful and violent." The blood splatters were also a victim of NFL censorship.

You can read the piece in its entirety here.

How will you view sports in the coming years? Network broadcast is still king and generates the most revenue, but with the ever-continuing rise of major networks pushing for multiple platform viewing experiences, how we view live sports—including Monster Energy Supercross and Lucas Oil Pro Motocross—could change profoundly over the next decade. Last week, John Ourand of the Sports Business Journal, examined how the major sports networks—CBS, NBC, Fox and ESPN—are approaching the coming years. From SBJ:

If networks are looking to increase revenue, it would seem that digital would be the first place they look.

“I’m sure that each network and each distributor is thinking about unique ways to distribute their content,” said Gary Stevenson, president and managing director of MLS Business Ventures, who negotiated the league’s over-the-top deal with ESPN. “They have to be looking at how to get unique content to consumers when and where they want it.”

Advertisers slowly have been spending more money on digital. Burke referenced such a move last month on Comcast’s third quarter earnings call. “There is clearly a shift to digital,” he said. “You can’t talk to a marketer or an advertising agency that isn’t talking about shifting dollars to digital.”

I've only gone to the Bercy Supercross one time, but even if I went 100 times, nothing will top that 2005 edition. An all-time personality mashup of Jeff Alessi and Eric Sorby predictably went off the rails. Mike Alessi made an an aggressive pass on Steve Boniface on Friday night. Boniface was pissed and a fight ensued in the pits. On Saturday night, Jeff Alessi made an aggressive pass on Boniface (retaliation?) so Sorby then waited in the famous Bercy tunnel to do some Alessi taking out of his own. The tunnel is part of the race track, where the riders momentarily exit the stadium. Fans can't see the action so it seems like a good place to try something dirty, except the cameras are on and everyone can see the action, anyway. What they eventually saw on the stadium big screen was a Jeff Alessi/Eric Sorby fight in the tunnel while the racing was going on in the stadium. It doesn't get any better! Or maybe it does.

You see, one of the cool parts about this event is that the riders all stay at the same hotel, and everyone is treated to a buffet dinner together after the race. Well, tension was high that night, with all the riders gathered in one room, Sorby surrounded by his French allies, and Jeff plotting a course of revenge, I believe with a butter knife and perhaps a dinner roll. High School lunchroom drama on steroids, pretty much. Oh, and then the next night the promoters, um, accidentally sent all of us on a bus ride to a club. A gay club. But that's another story for another day....

Earlier this week we went digging through past Paris-Bercy results. Turns out our own David Pingree is seventh on the all-time main event wins list. Only David Vuillemin, Jeremy McGrath, Rodrig Thain, James Stewart, Larry Ward, and Andrew Short have more wins. We tried to track down a photo of Ping at the famous event, but that was some twenty years ago, and people still shot in Polaroids. Sorry, Ping. Anyway, our own Jason Weigandt was curious what that time in Ping's career was like.

We're posting a list of past Bercy SX winners and I noticed your name appears on it quite a but, including a run as Prince of Bercy in 1995. Can you tell me what royal life in Paris was like? Did you have a list of duties or just sit around while the paparazzi tried to square you up on a date and speculate on the next princess? Good times back then?

It was tre bon, my friend. Pro Circuit used to attend the event regularly until they had a rift with the promoter. In 1995 I went over and won all three nights [seven out of eight main events] in the 125 class. The class was stacked with a very talented group of French riders, including David Vuillemin, Sebastien Tortelli, and Stephane Roncada. It was my first trip to Europe and I'll never forget the airplane ride with the guys on the team and playing poker in the hotel with Mitch Payton and Skip Norfolk. We had a lot of fun back in those days. The racing was all business, but afterwards it was way more fun than it is now. It's a little uptight these days. Anyway, I was shocked by the standard Euro nuances: small hotel rooms, warm milk, carbonated water, strange food, and cigarette smoke so thick and pungent it could gag a hooker. It was all new to me. I tried to make nice with the French fans, but they are a fickle bunch. I'll never forget how loud the fans are there, the ecentric opening ceremonies, and the chainsaws and airhorns in the crowd. It is truly a unique experience. I still have two of those trophies in my office, and the third is on display in Pro Circuit's lobby in Corona. I made several trips back after that, but that first time was easily my favorite trip to Europe. Great memories.