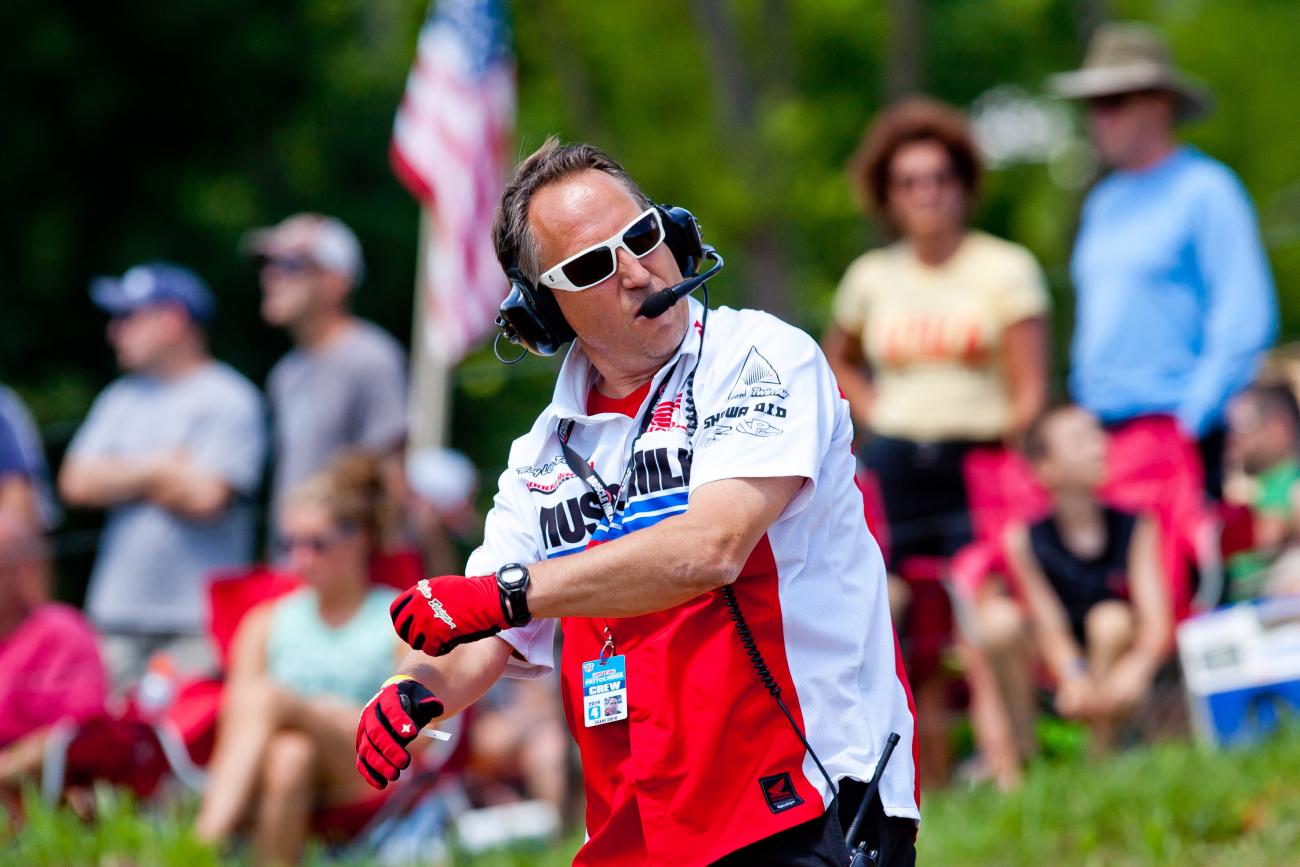 Between The Suspension Guy

I have to admit that when I heard factory Honda chassis/suspension expert Shane Drew had parted ways with big red after the season, it was a bit shocking. Drew, originally hired to wrench for Jeremy McGrath at Honda for the ill-fated 1997 season, had been with the brand for a long time and enjoyed some success. But things happen and Drew found himself looking for a new place to go to work for the first time in a long time.

I caught up to fellow Canadian and smart guy Shane to find out where he landed, and to get some thoughts on his time at Honda.

Racer X: You got a new gig, and it’s got to be a little weird for you working on a green bike now after being with a red one for so long. Talk about what you’re doing now.
Shane Drew: I just started a new gig with TwoTwo Motorsports. I worked with Chad [Reed] when he rode Hondas, so a couple years, and we had a good relationship. When I wasn’t working at Honda anymore, I approached Chad and he was very interested right from the first conversation. We were able to make it happen.

It’s quite a team Chad’s building there. It’s like a super team of technicians.
That was one of the reasons why I was interested in going to Chad’s team in the first place. I know all the guys there and I get along with them well and I know they’re such an experienced group of guys.

Chad’s a picky guy, and I think he does a lot of testing. You’ve got experience with him at Honda. He’s not an easy guy to work for, but at least he knows what he wants.
That is true. And the guy’s an awesome supercross rider, so I don’t think he’s done yet with having success with supercross. He’s not the easiest guy in the world to work for, but when you do good with him, then it’s that much more rewarding. I don’t mind a rider that knows what he wants and doesn’t lead you in a bunch of different directions.

What’s your job title there?
Right now I’m “the new guy.” He wants me to help on chassis, suspension. I know Oscar’s [Wirdeman] there, great guy. Actually, another reason why [I went there] I liked working with him when he was over on the Honda deal. So help Oscar, help the chassis side. He’s got a lot of guys, but it’s still a small team, so there’s still a lot of things to do. I’ll help wherever he needs it, but he wants me to focus on chassis, suspension, and anything else.

I imagine working with Josh Grant is part of the deal, right?
Yeah, for sure. I know Josh from when he rode Honda too.

Let’s talk a little bit about Honda. I know I was pretty surprised that you left there. You’ve been there since 1997, had a lot of success, done a lot of things over there. I guess if I was shocked you must have been a little floored, too.
It wasn’t what I had planned, but it’s just business decisions. I had seventeen good years there.

Yeah, on the bright side, not a lot of people have seventeen years at a company in this industry.
I’ve found that there’s not many people that have been on one team for that long. Upper management had some different plans on how they were going to proceed with the team. I’ve got no hard feelings. I was there seventeen years, I got paid well, and I learned a heck of a lot.

With Hondas, you’ve been working on Showas. We saw Chad with some Öhlins at Des Nations. Maybe the KYB stuff may show back up. Heck, maybe you’re back on Showa. Does that matter to you? Is a fork a fork and a shock is a shock to you?
No, I spent many years working with Showa at Honda, but I was also involved in the last few months with testing KYB with them also. You’ve got to look at everything. And for sure, they’re all a little different. Kawasaki’s a little different learning curve than Honda too.

People don’t really understand that chassis have a lot to do with suspension. It’s not just a fork and a shock; it’s so many other things.
And settings don’t translate either. It’s not something you go just because of a lot of experience with Showa that you can throw both on a Kawi and have it work.

What were the highlights at Honda for you over the years?
Oh, there’s many. We had awesome years, working with Jeremy McGrath as our test rider for so many years to when Ricky Carmichael was there, to Sebastian Tortelli. Trey Canard, that’s the highlight right there.

Let’s talk a little bit about Trey Canard’s end-of-the-season run when he put on the KYB suspension. That was pretty surprising that it made that much difference.
When you’ve got a guy like Trey Canard with as much talent as he has, and he’s getting thirds, fourths, fifths, it’s not much off the pace to be winning. It doesn’t take much of a change, just got to find the right ingredient. He really clicked with that new suspension.

Were you surprised, though?
Yeah, I was surprised. It was that big of a deal for him. His whole career, when he’s on his game and has confidence, the guy is amazing. That helped him get back to that spot in his confidence.

After you and Honda parted ways, did you have some other stuff you were looking at? You said you talked to Chad right away and he was interested, but were there some other things on the table for you? One of the times I talked to you, you were even talking about maybe taking a year off.
Well, I don’t think I ever really seriously discussed that. It would have been nice, but I’ve got bills to pay so I couldn't take a year off, but I did enjoy my time at home. That was awesome. But I’ve got a passion to go racing, so you’ve got to do it. I had some other opportunities. I’d been working on the Chad thing, trying to see if he could pull that together. I had one other opportunity that would have been actually a lot of fun to do. I had to turn that down because I decided on this with Chad.

Talking to Kehoe, when he left Honda and the industry he was like, “Man, it was really weird to get off the merry-go-round.”
I told my wife that I feel more guilty now of all the time I’ve been gone away on the road, with how much stuff actually needs to get done at home.

So you’ll be going to Florida a little bit with Chad here and there testing, I’m sure?
Doing lots of testing, filling in wherever, maybe not go to every race, which was another reason why I was very interested in that position, because I do want to spend some more time at home. I’m excited. The change is good.

You were working on Showas and you were working on Hondas for so long. Maybe you kind of got stuck in a box, and maybe this can open up some new brain waves and get you a bit more excited.
Yeah, it’s all a new challenge. Just like when I changed from being a racing mechanic at Honda to being more involved in the chassis side. It was a new challenge. It was frustrating at times, but it was awesome at times. I’m very proud of the work I did at Honda. I think we had a lot of success.

Do you think, having been at an OEM for so long, that the future of the sport will include more teams like Chads or RCH and less manufacturer teams?
It’s hard to say. One, I think it depends on how involved the manufacturer wants to be, how much freedom they want to give the teams. Like right now Yamaha doesn’t have a full-on factory 450 team, where Kawi does, but they also have Chad and they support him with some works parts, but he has more freedom.