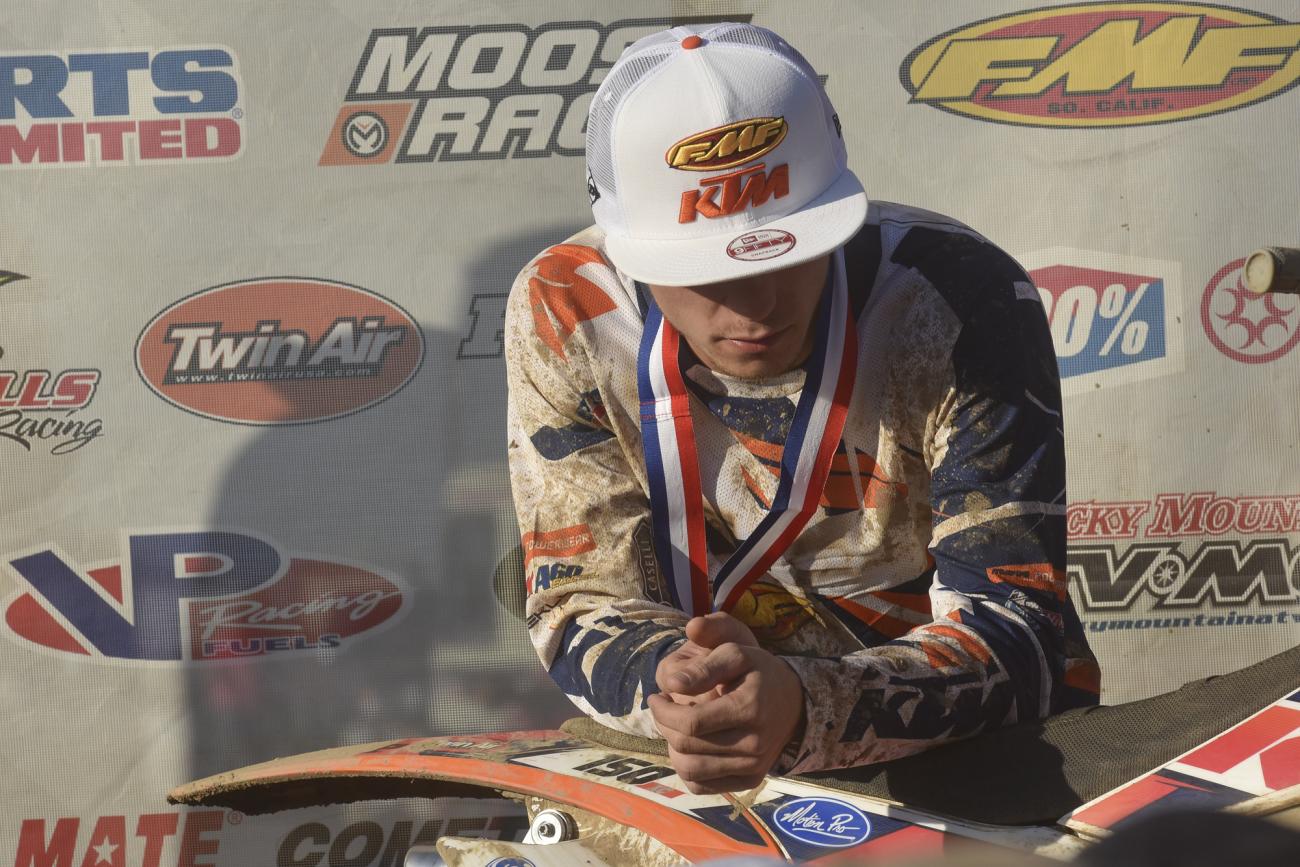 Team FMF KTM’s Kailub Russell clearly likes a challenge. When he lost CharlieMullins, his main competitor for this year’s Amsoil Grand National Cross Country presented by Maxxis, an AMA National Championship, to injury, he wrapped the title early and decided to race a KTM 150XC two-stroke at the final two rounds. Battling 450s, he won yesterday’s Amsoil Ironman GNCC on the bike, then donated it to help injured GNCC racer Rory Mead.

This morning, Kailub gets on a plane bound for Argentina. He’s part of a Team USA effort at the International Six-Days Enduro (ISDE) that is considered a real contender to win the event. Team USA has never won the ISDE. Can they do it this time? We talked to Kailub after yesterday’s Ironman win to find out.

Racer X: Well, you won a GNCC overall on a 150. That seems crazy, but you seemed confident all along. So is this a crazy thing or is this not a crazy thing?
Kailub Russell It’s kind of crazy and kind of not. But it was friggin awesome! There were so many people that didn’t think I could do it. At the last race, when I got second, Josh [Strang] rode really well, and I knew this track would be especially tough. I said on the podium at the last race, if it gets tough and rutty, I think I can run with those boys. This weekend, once I got around [Ryan] Sipes and Charlie [Mullins] I really had to pick it up and get away. I knew if I was going to be battling those guys it would be hard, so I had to really pin it and try to check out. This track, there was so much grass track and the 450s had a huge advantage. I caught Sipes on the second lap, and we got to a field section, and he probably put 10 seconds on me in that section alone! The way it was laid out, you had a grass track, the pits, the motocross track, then another field section, so he’d pull me a ton there. So I kind of planned out where I passed him, I passed him where there was a lot of woods so I could get away before we got back to the grass track.

Yeah, because the first thing that comes to mind with the Ironman GNCC is those huge cornfields, where it gets rough and fast like a big motocross track. A 450 four-stroke would have to have a huge advantage there.
Yeah. But you know what did it all for me? I saw the trophy and I said, “Man I want one of those!” It was a huge hammer, probably one of the coolest GNCC trophies I’ve ever seen, and I wanted one for my collection. I knew I had to win after I saw that.

You said the bike could be an advantage in muddy or rutted stuff. Where there some sections were it was better?
I don’t think there were any [sections] on that track. I had to ride a perfect race to get it done, especially on those huge hills. I had to make sure I had a good drive out of every turn, and nail all of my corners clean. This track, there are parts where you do a 90-degree turn through water and then you basically go straight up a friggin cliff! They’re hard on this bike, especially in the main line, and later in the race when it gets chewed up. I had to make sure I minded my Ps and Qs in those sections. I wanted to win, and I went out and did it.

Okay, answer this age-old question: what’s more tiring? The two-stroke is lighter but sounds like you have to work really hard. What’s the difference at the end of three hours?
You definitely notice the weight straight away, but it’s way harder to wide. Everyone has switched to four-strokes because the things are way more tractable. When it gets rough, anything with more torque and a little bit more weight, it seems like it squats and hooks up, you don’t feel as many bumps, where on a two-stroke, especially a 150, if there’s a bunch of chop, you feel every hole and it’s beating the crap out of you. Then the engine is lean popping everywhere because you’re in too low of a gear, but if you up shift you’re in too high of a gear. A four-stroke is a huge advantage. But, it was fun and I’m glad I had two races to get it done, and that I did it. But I can’t say I would do it again!

How did the charity raffle go for Rory Mead?
It went pretty awesome. We raised over $50,000, which is more than I thought I was capable of doing. I split that money with him. It was insane; we had such a great response. Then we had Rory there and we had him come up to the podium and pick the winning ticket out, and the winning person was right there at the podium! It was insane, we had people from all over the world enter the drawing and the winner was right there at the race.

I split the money with Rory, I spent some of my own money to get the bike, but obviously I got a good deal on it and all of my sponsors really stepped up and got me cool stuff to go on the bike. I mean, it was a KTM Factory Services motor; it was unreal fast for how small the bike is. FMF even had a prototype silencer and they ran it on there, it was really trick. Also, the ISDE is coming up, KTM takes care of shipping my bike and my hotel and stuff, but I still needed to raise some funds so I could get my wife and my dad to come over, and some other things, the costs are pretty astronomical for this year’s ISDE. But, we ended up raising more money than we expected, so when I get back I’ll open up a charity account and figure out where else to put it.

Let’s talk ISDE. Motocross fans sometimes get confused; it’s not like the GNCC des Nations. It’s a totally different format and style than anything you guys race over here, and that’s why Team USA hasn’t had the same success that the Motocross of Nations teams do—we’ve actually never won it. So, what are the expectations this year?
I’d be lying if I said I don’t think we could win it. Winning is a big possibility, we have a stacked team, and some of the main teams don’t have all of their best riders. That’s the biggest thing. Last year the French team was incredible, they had like three of the top five riders overall. This year they don’t have their best riders, but they’ll still be tough. Australia will be tough. It’s going to be exciting, and hopefully we have a good week and we’re in contention for the W.

That’s a huge change. American riders didn’t used to go over there with this kind of confidence.
I think the biggest change is we now have a real team manager running things [FMF KTM off-road Team Manager Antti Kallonen] instead of just the AMA. We have world-class riders that are excited about the event and want to do well. That’s the biggest thing. We know our capabilities, and hopefully we feed off each other. We just want to be in the hunt. I think last year was the first time we were really in the hunt the whole week, and to finish second, I don’t even know when the last time the USA did that. We’re just about never even on the podium. So we know we can do it now and I’m excited.

What’s the terrain like?
I’ve seen a picture of a test and it looked like rocks on dry dirt. I heard it’s going to be kind of like the desert, but everyone has to ride the same stuff. I think we’ll be all right.

Explain the format differences.
We’re a lot more prepared than before. We don’t have a series in the U.S. that does a sprint enduro format. Our enduros have 12-mile sections; there, the longest test is probably 12 minutes. They just ribbon out some sections and you just go and pin it. Nothing is similar here, but we’ve done some testing out at Taylor Robert’s house, we set up some tests like six-days. And Charlie [Mullins] and I rode the Full Gas Sprint Enduro that Jason Hooper put on a few weeks ago; it was a similar format. I know J Day does some sprint enduros, too.

When’s it go down?
We start racing next Monday. So we’ve got a week over there to figure it out.

Good luck over there.
Thanks. I think we’re looking pretty good!