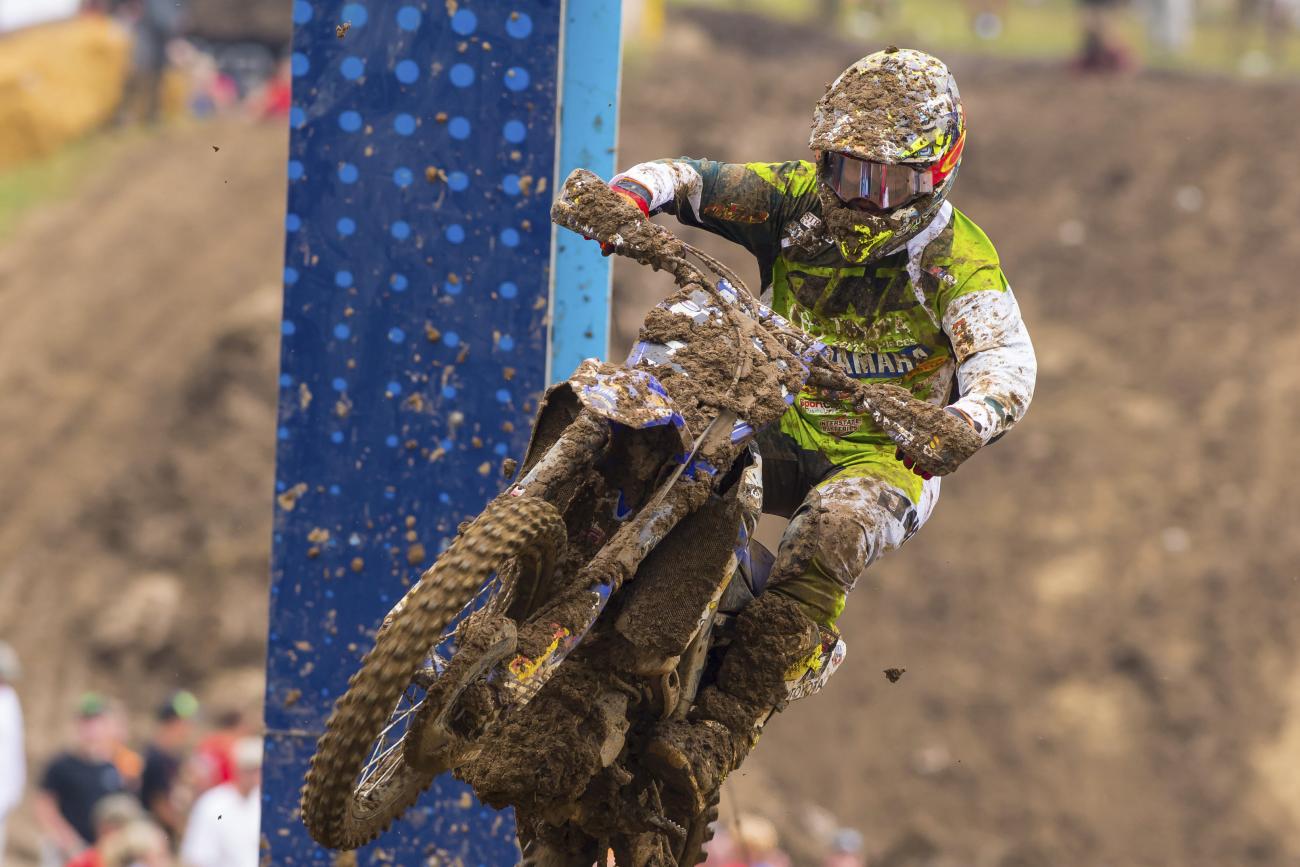 The rain ruined any chance of seeing the real thing, but most riders were encouraged by what they saw from the Indiana National. Jessy Nelson got to ride the track on press day, when it was dry. “I thought the track was awesome. I think [track builder] Marc Peters did an awesome job, and so did the [track] owners and MX Sports. I was pumped when I saw it. I was already expecting it to be good, and the track suited my riding style. Today I expected sunny weather, shorts, flip-flops, then it started pouring down rain.” Ken Roczen summed it up like this: ”I think if it would have been dry and stuff, I think this is going to be my new favorite track.”

Tire choice is huge in a mud race like this, and most riders had a dilemma. Dunlop offers the MX11 sand tire with a paddle tire pattern, which offers superb hookup in a straight line, like off the start or in deep mud. It’s not the best choice on the harder, slippery spots, though, but most riders went with it because the start is so critical. Dunlop says the top eight riders in the first 250 moto were on the MX11.

Even qualifying presented a dilemma for the riders. Weston Peick didn’t turn a single lap in qualifying and used his top-ten provisional to get into the motos. This also gave him a terrible gate pick. We saw Weston in staging during the first practice, when the 450 riders turned in their best times, and he decided not to go out. Fredrik Noren says he crashed a bunch in his first practice and never got a clean lap in, so he ended up fortieth fastest. Noren, and most of the 450 riders, elected not to even go out for the second practice, knowing their times would be even slower. Noren still would have made the motos automatically because he was also top ten in points.

Eli Tomac did not have trouble in qualifying, as he scored the Oakley Bomb award with the fastest 450 time. The rest of the day wasn’t so good. "It was a rough day overall, which is a little weird because I usually get along with muddy conditions,” Tomac said in a team statement. "Practice showed I really felt comfortable in these wet slick conditions. I was fastest overall and felt confident going into the first moto. Unfortunately, I had some issues that were messing me up. Plus, I had to pull off the track and put new goggles on after the first lap of moto one because I couldn't see at all from the mud. I made a couple mistakes here and there too, where I ended up tipping over. The first moto was really just a fight to stay up and out of the roost as much as I could. Vision was tough but going into the second moto the rain actually quit. I still had a little problem seeing clearly because of all the roost but it was two more crashes that really messed me up. All I can really say is that two mistakes kept me from getting on the podium here, I think."

Tomac has climbed his way up in the points to fifth, but Brett Metcalfe won’t give up fourth without a fight. In the second moto he stuffed his front wheel into a mud hole and struggled and struggled to get it out. “I was exhausted,” Metcalfe told our Steve Matthes. “I was probably done. Just taking deep breaths. I knew I had one shot to get out of the mud, and I was probably going to cook it [the bike]. That one wasn’t that great.” Metty finally did free his Kawasaki, and he soldiered on to thirteenth. Metty still has a solid 23-point advantage over Tomac heading into the finale.

Trey Canard was happy to have ridden so well in the mud, taking second overall and the second-moto win. “I haven’t typically been a good mud rider the last few years,” he said. “Daytona in 2008 was probably my highlight of mud riding. But this type of mud I’ve really struggled with in the past with the ruts and that sort of thing. I don’t know. It was just a good day. I really, really think vision is so key. If you don’t have a good start then you can pretty much forget it. You can’t see a thing, and it’s tough to ride when you can’t see.”

Let's take a look at the lap charts!

The Frenchmen, Christophe Pourcel and Marvin Musquin, have now won the last three overalls in the 250 Class. They’ve been close most of the season and sit fourth and fifth in the series standings. The two actually don’t have much of a history racing each other. “One year in the 85 [Class] we raced together, but that was my first year on the 85,” Musquin explained. “That was his last year. So he is a little bit older than me, but it’s funny that we never really raced together. My first year in GPs, that’s when he moved to America, so we actually never raced together. There’s a lot of competition behind us. We are the only two French riders in America and we are doing pretty good, first and second [in some motos]. It’s nice. Last week it was him and this weekend it’s me. Like I said, lots of competition, but we respect each other.”

Although Dean Wilson hasn’t reached his ultimate goal—winning motos and overalls—in his final 250 Class season, the five-year veteran has been consistent since his return at the Tennessee National. Over the last seven rounds, Wilson has twelve finishes inside the top ten. Furthermore, over the eight motos, he has six finishes inside the top six. Wilson is still striving for more, though. “I have one more race to get back on the top of the podium and that is where I want to be at Utah,” he said in a team statement.

In just his second career race, Chris Alldredge knows he still has a lot to learn. “I’m definitely a little bummed with the couple mistakes I made out there today because I felt like we had another top 10 in us,” Alldredge said in a team statement. “There’s just so much talent at this level that you really need to learn when to push and how hard to push, and I think that’s what I really took away from this weekend.” Alldredge finished fourteenth overall in Indiana.

If Blake Baggett had any chance of capturing his second 250 championship, he needed exactly what happened at Indiana to happen—a mud race. The early morning heavy rains provided a sliver of hope for Baggett. Unfortunately, the mud ended up hurting him and eliminating him from contention. “I honestly couldn’t really tell you what position I was in at any point in the motos, but I knew I needed to just try and make passes happen,” Baggett said of his first moto in a team statement. Baggett would finish the moto fourteenth and have to sit idly by and watch as Jeremy Martin captured his first career title. Baggett bounced back for fourth in moto two.

While Rockstar Energy Racing KTM’s Ryan Sipes and Joey Savatgy (we’ll have more on them later here on RacerXOnline.com) were basking in the horrid conditions, the third member of the team, Jason Anderson was struggling, as he plunged into the muck in moto two, bringing him to a complete stop. “I was near the lead and then got my front tire stuck in a mud hole. I made a few more errors as the race progressed but still managed to get 10th in that moto,” Anderson said in a team statement.  “Next weekend is my last ever race on a 250 so I want to go out on a really positive note."

Privateer Brady Kiesel injured his knee at Indiana and will miss the final round at Utah. The injury will require surgery, but Kiesel hopes to be ready for Monster Energy Supercross in 2015. “I started the year with an injury and ended it with one. But looking to be back soon,” he said on Instagram.

It was a rough day for the GEICO Honda crew, as they failed to place one rider inside the top ten overall, and had five moto finishes of twenty-fifth or worse. Justin Bogle, who went down more than a few times, offered no excuses: "Even though the conditions were difficult I can't complain because we all have to race the same thing whether this was a new track or one we go to every year." Neither did Zach Osborne, who went 30-35 for thirty-fifth overall with assorted bike problems. "It was tough out there, but it was tough for everyone as well. I hate having a double DNF day, but we will keep our heads up and charge ahead to Utah."

Rookie RJ Hampshire also struggled in just his second professional race. "I had a terrible gate pick after how the first moto ended," Hampshire said in a team statement. "I got a decent start again for the second moto and was running around the middle of the pack. I had worked my way up to 11th in about four laps but ended up going down, causing technical difficulties. It was a tough weekend for us but we're getting there."

Former Monster Energy Team Green Kawasaki prospect Nick Gaines made his professional debut last weekend. The Georgia native finished eleventh in moto one, before problems in moto two relegated him to fifteenth overall. We will have more from Gaines later in the week.

It was an all-around good weekend for privateers, but JAB Motorsports’ Cole Martinez had the best day, finishing sixteenth overall, including an eleventh in moto one.