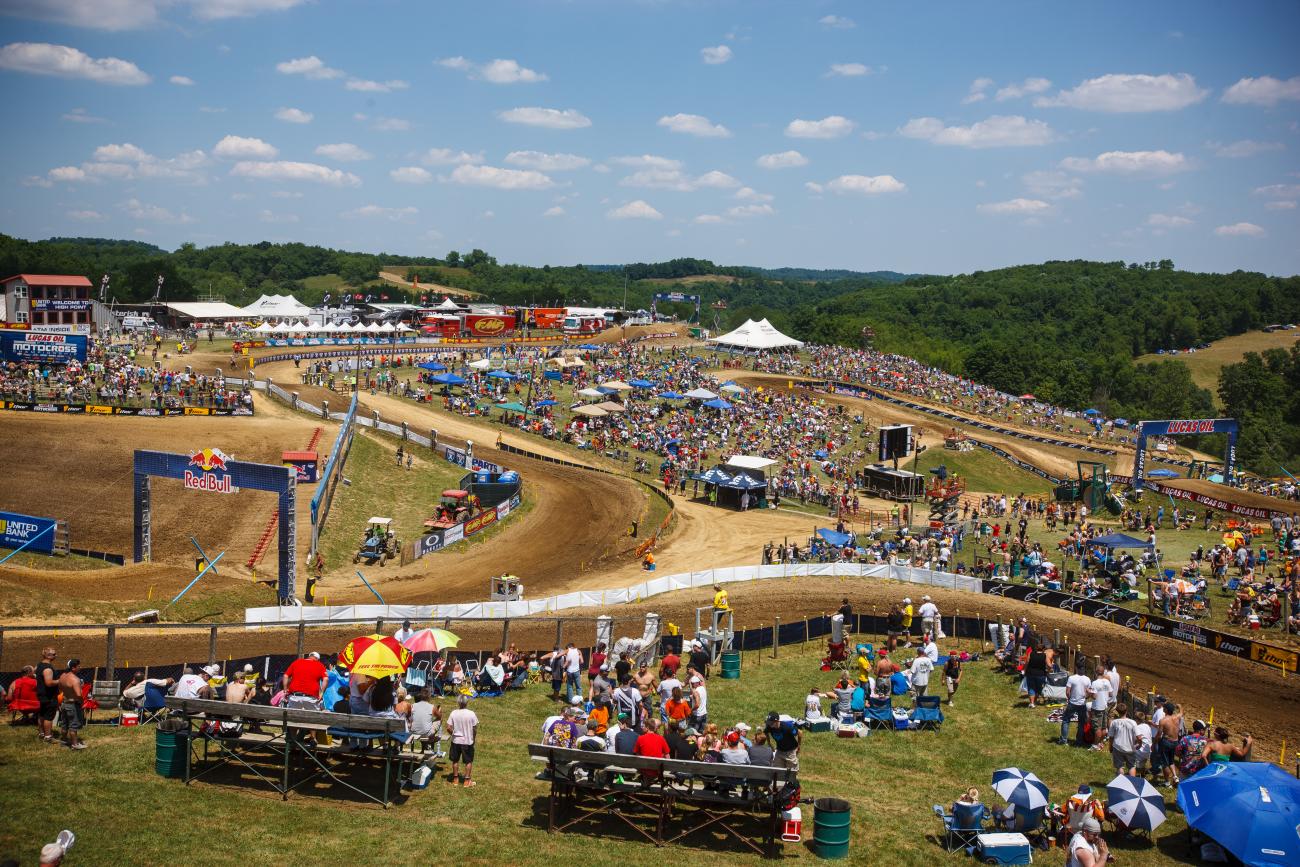 Hello, everyone, and welcome to the Rev Up. Round four of the 2014 Lucas Oil Pro Motocross Championship charges into historic High Point Raceway in Mt. Morris, PA, this Saturday afternoon. As one of the oldest tracks in the series, High Point is a racer and fan favorite. The off-camber corners and long up and down hills create a challenge for the competitors, and while the scene is about as “American” as it gets, this place has long favored foreign riders. The rolling green hills, technical layout and even that morning fog (and occasional mudder) remind some riders of days in the GPs—and Ben Townley even said it reminded him of life back home in New Zealand! One of the biggest High Point stompings I can recall came from South Africa’s Greg Albertyn in 1999. He crushed the 250 field, making passes on the off-cambers and jetting away with 1-1 scores, which would eventually lead to the 250 National Championship.

This is just a cool place in general. One of my favorite memories in the sport was my first trek down the long, twisting road through the thick trees that leads to the track. It seems like you just drive and drive, then BAM, there it is. If it’s about 6:30am the clouds will be hanging above the track and all is about as perfect as it gets. There are a lot of characteristics that make High Point special, and ominous rain is one of them. The track has hosted some gnarly races in the past, and a storm already hit last night. The forecast looks clear for Saturday, but the track has already taken on some moisture. Rain or no rain, another storm is coming.

The racing has been awesome. With four different moto winners in the 450 division, and some crazy good battles throughout the top five, things are heating up. Honda Muscle Milk’s Trey Canard has steadily been upping his game and could be ready to knock down a moto or an overall win. He’ll have to pound the rock hard if he wants to stop the Red Bull KTM duo of Ryan Dungey and series’ leader Ken Roczen. Meanwhile, Yoshimura Suzuki’s James Stewart let his winning presence be known with a moto win of his own last weekend.

Over in the 250 Class, Yamalube/Star Racing Yamaha’s Jeremy Martin and Cooper Webb have been running the show. However, the saying, “It's always the darkest right before light” applied to the Monster Energy/Pro Circuit squad as Blake Baggett notched his first overall win of the summer. The team had been battling all kinds of bad luck up until that point.

It’s so good right now. Never been a better time to be heading to High Point. Let’s go!

A mediocre start and subsequent slide out from Jeremy Martin finally put an end to his five-moto win streak. He’s still my favorite to run woodshed on the comp this weekend, as he just seems to have his game on absolute point. The wolves are coming though, as Christophe Pourcel, GEICO Honda’s Justin Bogle and the previously mentioned Blake Baggett are primed for wins. Cooper Webb is really looking to get his first win as well, and would it really surprise anyone if he pulled it off?

A few years ago, Trey Canard was rounding into form, holding strong under serious pressure from 250 front-runners Christophe Pourcel and Ryan Dungey in hopes of notching his first-ever overall win. He was a few laps from glory when he went over the bars and broke his arm. That began a string of injuries that surpasses anything I can think of anyone ever coming back from. Well, he’s back and it looks like he is ready to win one of these things. If he can get up the tricky start stretch in the top three he’ll have a shot, but like I said earlier, the KTM guys are just so strong. I tell you what though, if you’re looking for someone to swing your t-shirt over your head for, keep your eye on #41.

JGR Yamaha’s Josh Grant has won a 250 overall at High Point once and he’s been riding exceptionally well early on this summer. His YZF450 is the fastest bike on the track and if he yanks a holeshot or two he will insert himself into the overall win picture.

High Point hasn’t been particularly kind to James Stewart. Big crashes, bad luck and misfortune have clouded him at this track, but, like Canard, he looks primed to break out. The top five seems to be on lockdown now with these three guys and the leading KTM duo. Which one of them is it going to be this time?

This is a special venue for me. It was the first outdoor national track I ever saw and from winning as a racer on amateur day, to working for Racer Productions and single handedly staking in the Acerbis track markers for a few years, High Point is the very definition of motocross to me. I’m not alone in this regard, as every year the loudest and wildest fans in the world come out to watch the show. It’s going to be a very good Saturday afternoon folks.