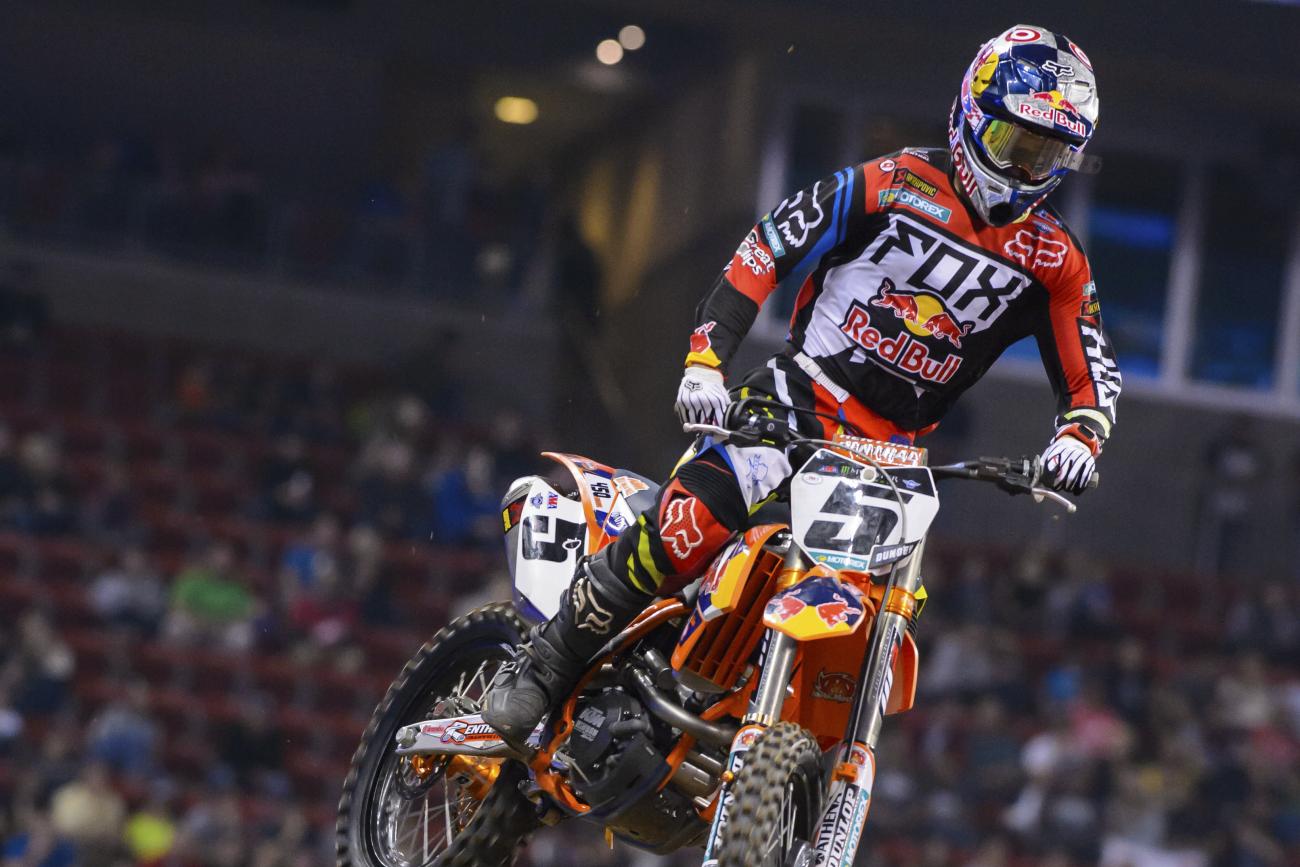 1. We've seen a lot of injuries the last few weeks, outdoors are coming up, and most point position battles are set. Do you think guys are pushing to make supercross gains, or is this just a time to be steady?

Jason Thomas: I think that it varies amongst the riders. For a guy like Weimer, he really needs to come out swinging and make a statement. For someone like Josh Grant, outdoors is where he can run up front and build some value for himself. Dungey and Stewart are probably a bit torn as this championship technically isn’t over, but it’s looking like RV has it wrapped. They have another chance starting May 24, but they can’t fully commit to that just yet.

Steve Matthes: I think that we're going to see a lot of riding around. Although I care who finishes fifth, sixth or seventh in the series these riders don't really care all that much. I think if Villopoto gets the start he'll push forward and try to win. But if another rider is feeling it and taking off or catches RV, he'll settle for whatever spot he's in. The only two guys I can see really caring a lot about their finishes going forward from here are Dungey and Stewart. They are both going for second place and both want to win races—winning races is a nice substitute for winning the championship.

Everyone else, they'll just do the best they can do and make sure they don't get hurt. This is over and most of these guys inside the top ten don't really care where they finish. I know this doesn't exactly build up the hype, but it's true.

Chase Stallo: It all depends on the rider and their situation. Vince Friese, for example, who finally gets a chance at a factory ride as a fill-in for Josh Grant this weekend, cares deeply about what place he finishes. He is fighting for next season. On the other hand, guys that are locked into their respective positions in points are gearing up for outdoors and wanting to make gains there.

2. Christophe Pourcel is still on track to race the 250 Lucas Oil Pro Motocross Championship for Valli Yamaha. What do you think?

Thomas: I think he will be a force in this 250 class. I know, I know, he has been out for a long time and everyone is a critic but I expect big things. His bike should be really competitive and his talent is off the charts. With 5-6 months to prepare and focus on outdoors only, I really see this title being within his reach.

Matthes: I don't know what to think about the #377, to be honest. I'd be a lot more excited if he was on Pro Circuit Kawasaki with Mitch Payton checking in on him and making sure he's doing the work. Comebacks after a year off from racing never really work and with the Valli Yamaha team coming back (they're the Rocky Balboa of teams—you can't keep them down!) with CP, I'm not sold on that team and Yamaha's ability to keep everything on track. Pourcel's got talent but in talking to the last couple of teams he's been on, I'm not sure he still really wants to race. I think he's racing because it's an easy way for him to make money. He'll be top five, but I wouldn't look at him as a title threat at all. Still, it DOES make the series more interesting.

Stallo: I don’t think anyone really knows what to expect from Christophe Pourcel. If he shows up motivated, he will contend. If he shows up disinterested, he will show flashes here and there but never be in title contention. One thing is for certain: he will make it a very interesting series either way.

3. Okay, that wasn't the most exciting race. What else is on your mind right now?

Thomas: I think the most exciting aspect is all of the silly season rumors afloat. Every team seems to have multiple offers out there and the riders are all circling the musical chairs. I can’t think of one team that is fully set for 2015 and that leaves a lot of room for negotiation and possibilities. Every weekend the dynamic seems to change and I hear of a new offer being made. Interesting times, indeed.

Matthes: No, it wasn't! Houston was so boring that at times Weigandt was actually booking flights during the races ... I'm serious. The "What else is on my mind" right now is a thought that I had about how the Teddy Parks Privateer Experience and Team Gus Racing are helping out so many dudes get to the races. You look at how many riders are on these squads and think about how most of these riders wouldn't be able to get to the races without these two privateer teams taking all these guys (most of whom do not make the main) and wonder where the entries would be without Gus and Teddy. And then I think about how the two teams should battle it out on the stadium floor before the night show in an Anchorman-style brawl to see who the toughest and most bad ass privateer really is. Seriously, I have no clue what's in this for Teddy and Gus (or even if their real names are Teddy or Gus) but golf claps for you gentlemen. Good job.

Stallo: As winter finally releases its grip on the entire Northeast and other parts of the country, the smell of the Lucas Oil Pro Motocross Championships is in the air. Can anyone challenge RV? Will Baggett capture another championship? Who will be the breakout star in the 250 Class? How will Tomac and Roczen fare in the 450 Class? It’s going to be a great summer and it’s on the horizon.